On a perfect January evening for football, a sizeable travelling support made their way to Bangor in the hope of eradicating the misendeavours of the last few weeks and securing three points ahead of the pack playing their fixtures the next day.

A win for Ards would also see them leap frog the Glens in the league, with a Glentoran victory therefore a must.

The Glenmen gave a warm welcome to Colin Nixon the recently appointed Ards manager in acknowledgement of his achievement as being the Club's all time record appearance holder.

Gary Haveron only made one change from the team who started last Saturday, with Stephen O'Flynn starting up front alongside Curtis Allen in place of the suspended Nacho Novo. 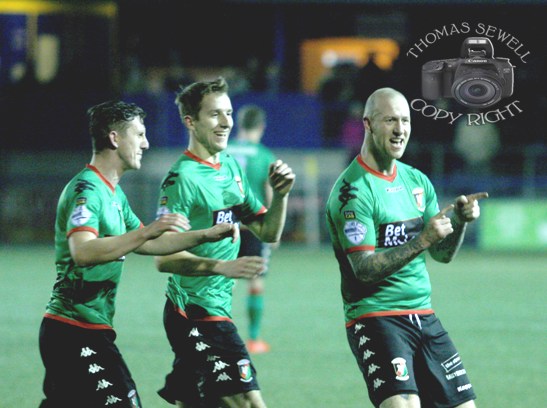 The first ten minutes of the match were tentative with both teams testing each other.  However, in the 11th minute Allen linked up well with O'Flynn who carefully turned one way and then the other on the ball before carefully slotting his low shot past the keeper into the bottom left corner of the net; a well executed first Glentoran goal for O'Flynn.

The home team had an opportunity to equalise in the 14th minute, with a powerful shot by Kyle Cherry going over the bar after being given too much space by the Glentoran defence in what should have been an equaliser.

O'Flynn continued to make his presence known throughout the first half, using his strength and power to command the ball and win challenging headers.  In the 15th minute a free kick by Redman saw O'Flynn head just over the bar, while minutes later a short ball from Curtis Allen to O'Flynn saw the shot go just wide.

It was the big striker's continued persistence that paid off in the 19th minute.  Chris Lavery, who was having a good game raiding down the left wing, managed to cross the ball close to the by line, with the ball falling to O'Flynn who again picked his spot and launched the ball into the top corner of the net, leaving Hogg with no chance. 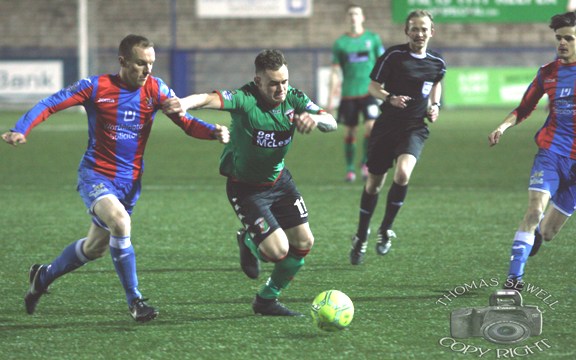 In the 25th minute Calum Birney replaced the injured James Ferrin in what appeared to be another ankle injury on a synthetic pitch. This was virtually a like for like exchange and did not upset the formation of the team.

Shortly after the substitution it was again birthday boy Chris Lavery who provided the cross from the left to see Marcus Kane heading just over. However in the 30th minute Ards demonstrated that they were still in the game when the ball fell to Gary Liggett whose long range shot went just wide of goal.

This was proved on the 33rd minute when Bradley crossed a deep ball into the box from the right.  There then appeared to be miscommunication between the Glentoran defence and the keeper, with the ball eluding everyone and curling into the far corner of the net; a goal from nowhere which put Ards right back into the match.  A strange sense of deja-vu was becoming all too apparent, with the travelling support fearing the 2-0 lead curse which has affected the Glens over the last few months.

Ards now with their tails up continued to push forward before the half time whistle, with a Carl McComb free kick hitting the woodwork.  McAllister showed strength and speed down the left hand side before passing to Tommons who saw his shot well saved by Morris.  It was then Ruddy who tried his luck from distance only to see the rising ball going just over.

The second half began at pace but with neither team really threatening to trouble either keeper.

In the 55th minute Marcus Kane blasted over from 30 yards, with a repeat by Chris Lavery only minutes later.

During this period of play Harmon was being particularly effective for the Glens down the right hand side, with McAllister conversely making life uncomfortable for Calum Birney with his pacy runs down the left.

As the half progressed it became apparent that both teams were closely matched as is evident by their league positions. The football was being played at pace with no quarter given, and although entertaining it seemed the match would finish with the 1-2 score line. 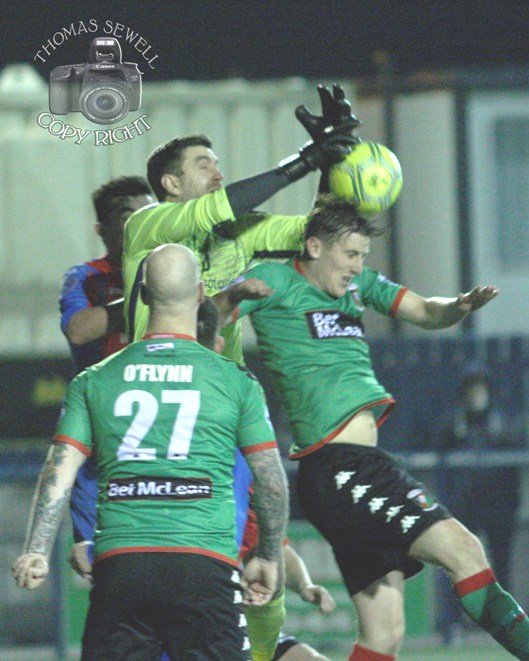 In 78th minute, the tiring Marcus Kane was replaced by Steven Gordon who was making his 100th appearance for the club. It was good to see Moko continuing his come back from injury, with congratulations to Steven on making his century.

Just as the travelling support were starting to do their traditional battle of fully opening the exit gate, three minutes into stoppage time Curtis Allen gave the ball to Aaron Harmon who made yet another strong run deep into the Ards box.  Pulling the defenders out of position, he centred the ball to be parried out by Hogg, with Curtis Allen on hand to slot the ball into the net and confirm the three points were in the bag.

The final whistle was blown shortly after, with the Glenmen heading home happy and to enjoy their delayed Friday evening.  A workmanlike performance against a dogged Ards team, with a well deserved win in the end.  C'mon you Glens.

Subs: Birney for Ferrin, Gordon for Kane and Smith for Allen 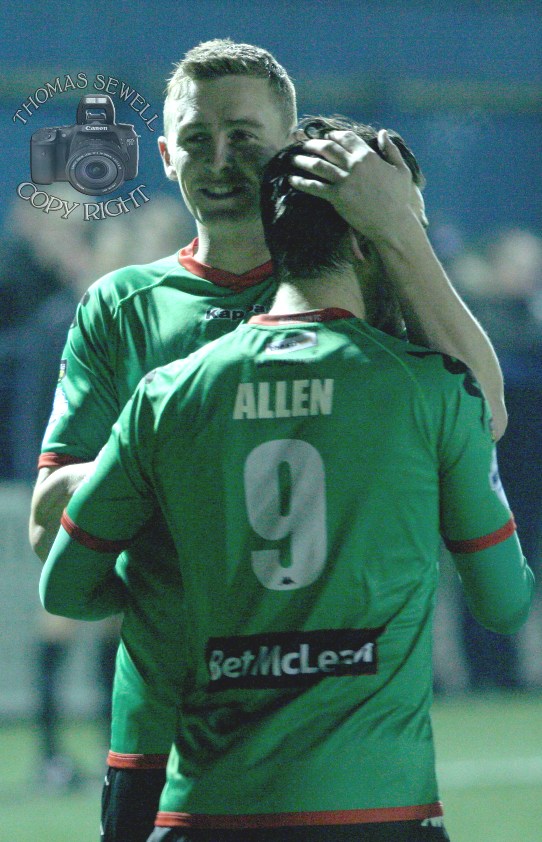