There will be mixed feelings after today's 1-all draw against Ards in the Danske Bank Premiership. Relief that we are still in that crucial 7th position in the table which would ensure a Europa League play-off spot but disappointment that we couldn't capitalise more on Institute's defeat at Dungannon. Gavin Peers returned to the starting line up following his suspension with skipper, Marcus Kane moving to left back and Steven Gordon going to left back. Nathan Kerr dropped to the bench. 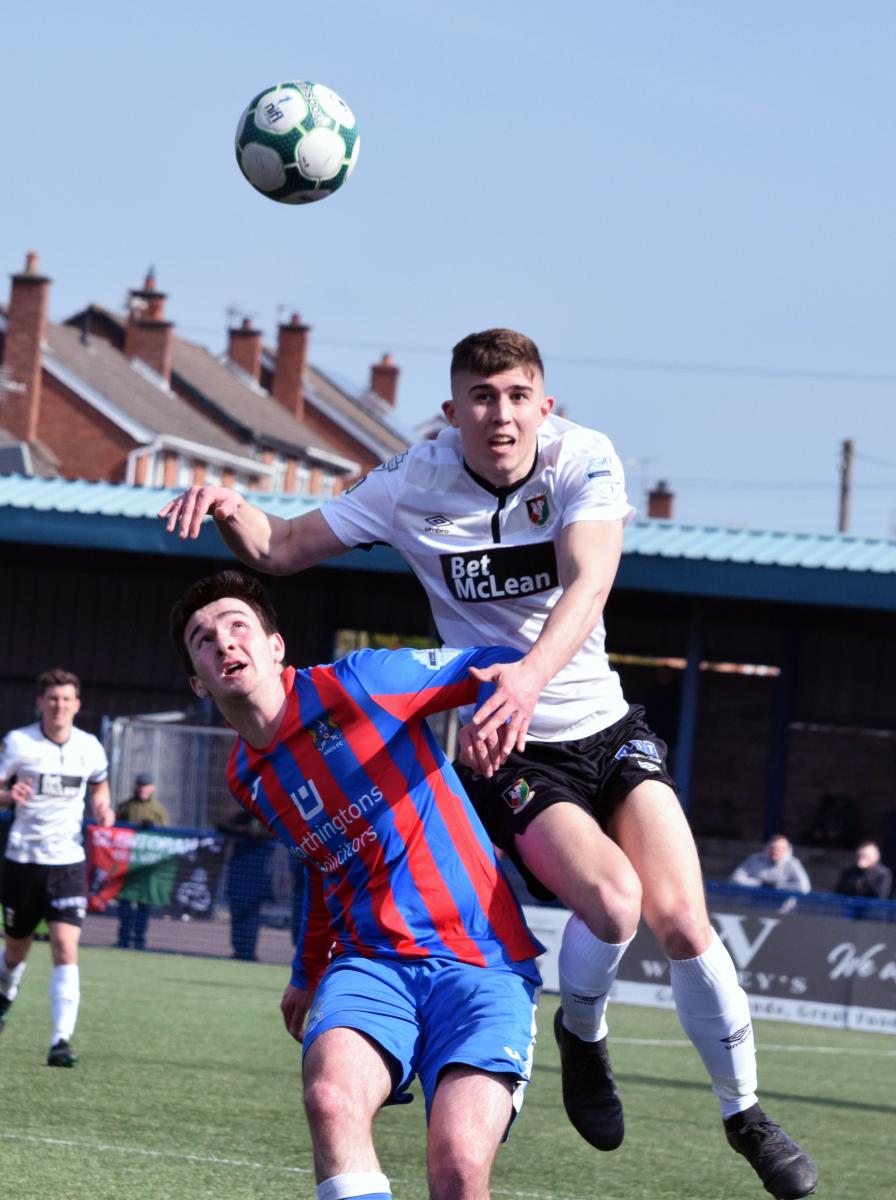 It was a difficult day to play football with high winds making things difficult for both sides. Glentoran started with the wind behind them and had by far the better of things in a goalless first half. How the Glens weren't in front was due to a mixture of some wayward finishing and some excellent goalkeeping by 'man of the match' Sam Johnston. 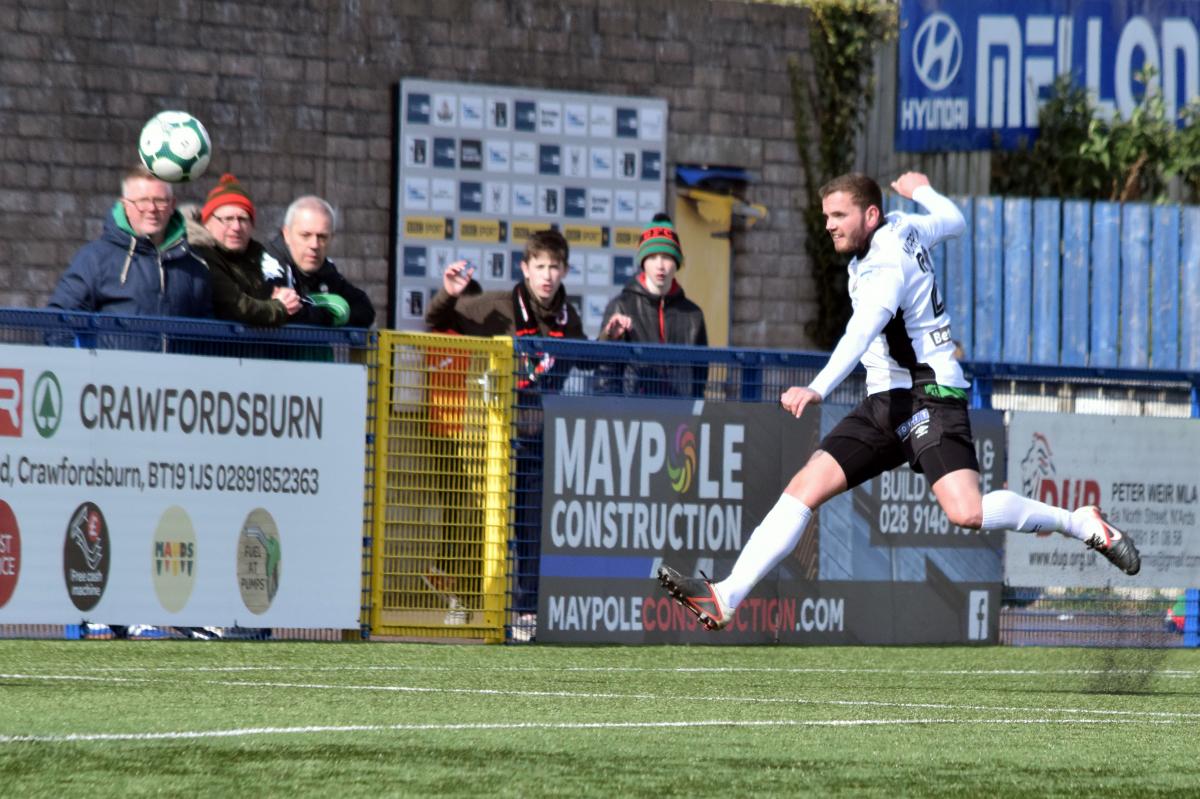 In the 4th minute a Chris Gallagher corner was headed goalwards by Gavin Peers but it was cleared off the line. Moments later Marcus Kane was caught by an arm to the face. Referee Anthony Clarke awarded a free kick but surprisingly there was no card shown! On 12 minutes a Marcus Kane effort hit the inside of the post and flashed across the goal. It fell to Paul O'Neill but his shot was blocked on the line. It took 21 minutes for the 'home' side to register their first attempt on goal, McAllister's shot deflecting off Steven Gordon for a corner. 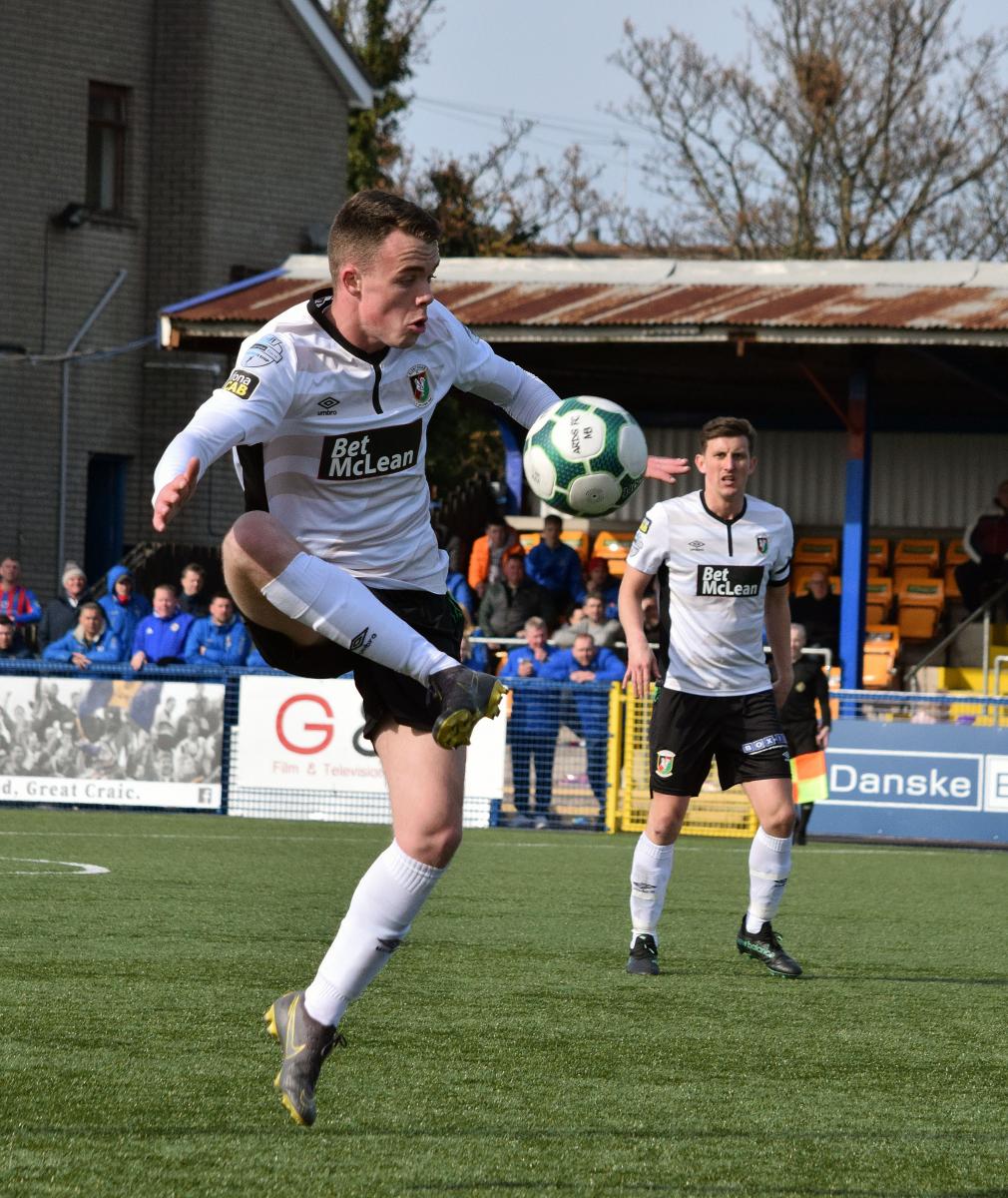 Former Glentoran defender, Jonny Taylor received a yellow card for a poor tackle from behind on Gallagher (27), something that would come back to haunt him later in the game. 10 minutes from the interval Glentoran again missed the chance to break the deadlock. Darren Murray set up Curtis Allen but the Glentoran number 9 was denied by a great save by Sam Johnston. Murray picked up the ball again and again found Allen. The Ards custodian would not be beaten though and saved from Allen once more. On 40 minutes a superb ball from the back by Gavin Peers found Darren Murray. Murray controlled the ball well but Johnston was there again to keep the game scoreless.

With less than a minute played in the second half Connor Pepper was felled in midfield by another poor challenge; referee Clarke yet again unmoved! Pepper tried to continue but on 53 minutes was forced to leave the field. A minute later the Glens fell behind. The normally reliable Elliott Morris spilled a shot straight into the path of Michael McLellan who bundled it over the line. On the hour mark the Glens were denied the chance to draw level. Curtis Allen beat a defender in the area and was clearly pulled back. Perhaps Allen should have gone down but he tried to stay on his feet only to lose possession. Referee Clarke may have been unsighted but the assistant was right beside it! 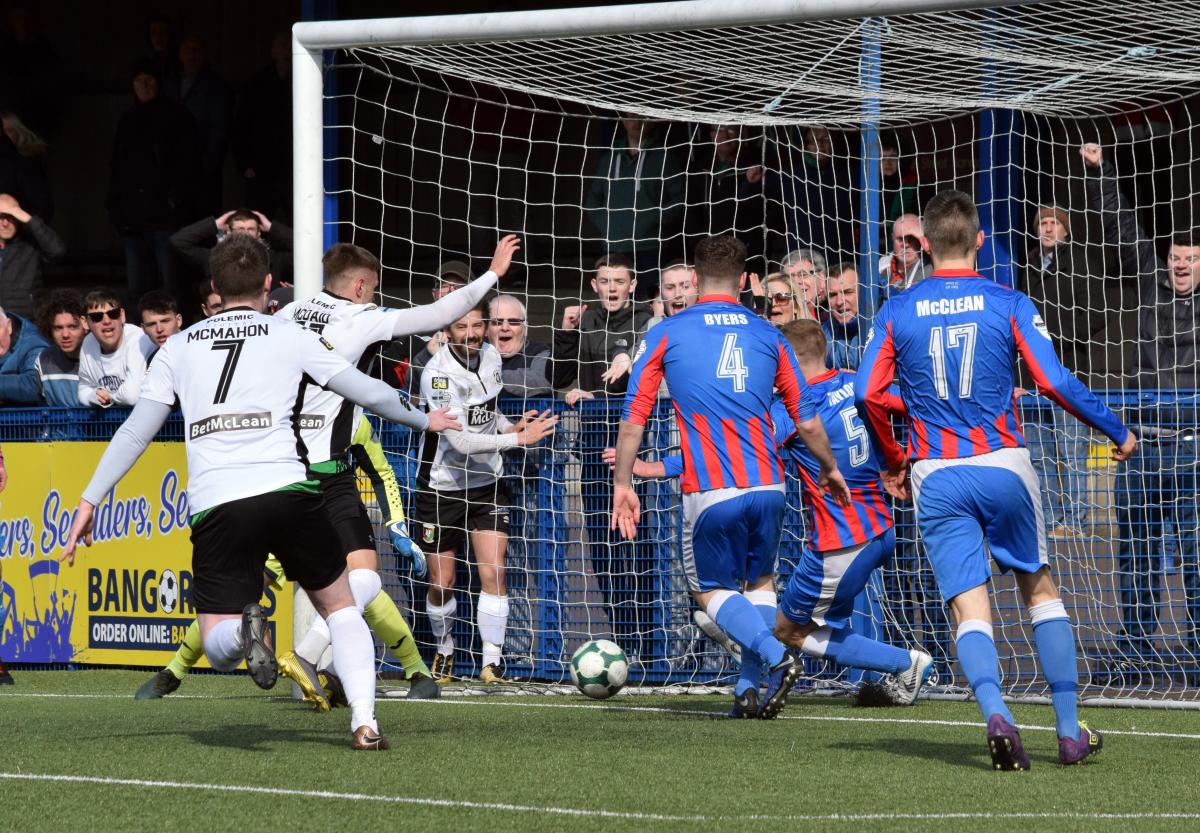 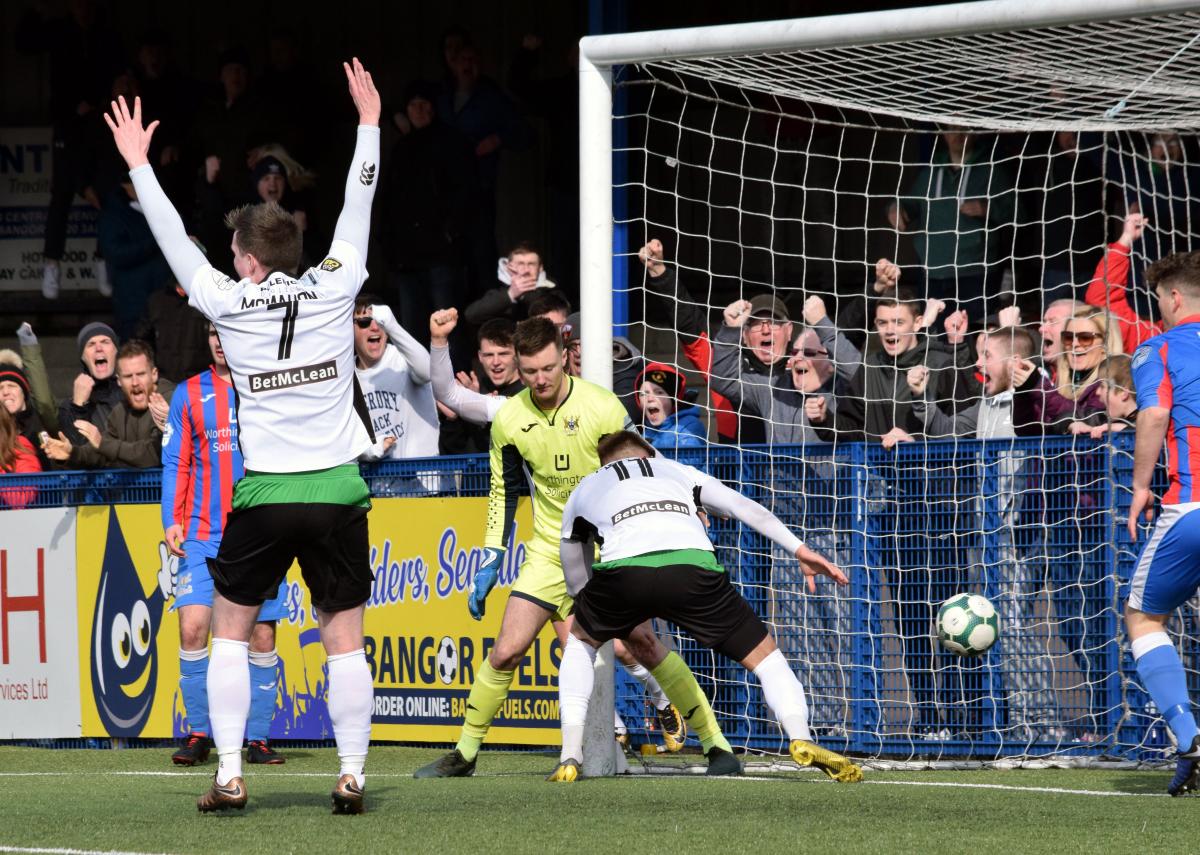 A long throw-in from Darren Murray was flicked on at the near post by Marcus Kane but as the ball flew across the 6-yard box there was no Glentoran player on hand to put it in the net. With 15 minutes remaining Allen and Murray combined again to create yet another opportunity but Murray was unable to convert. On 78 minutes manager, Mick McDermott made his final change with Nathan Kerr replacing Steven Gordon and Glentoran going to 3 at the back with Kerr and McMahon filling the wide midfield slots. It was Kerr, 2 minutes after coming off the bench, who put in a fabulous cross from the right. Curtis Allen rose to meet it at the back post and his header was forced over the line. It was hard to see who got the final touch with Robbie McDaid and a couple of Ards defenders all involved but it was a deserved equaliser nevertheless. 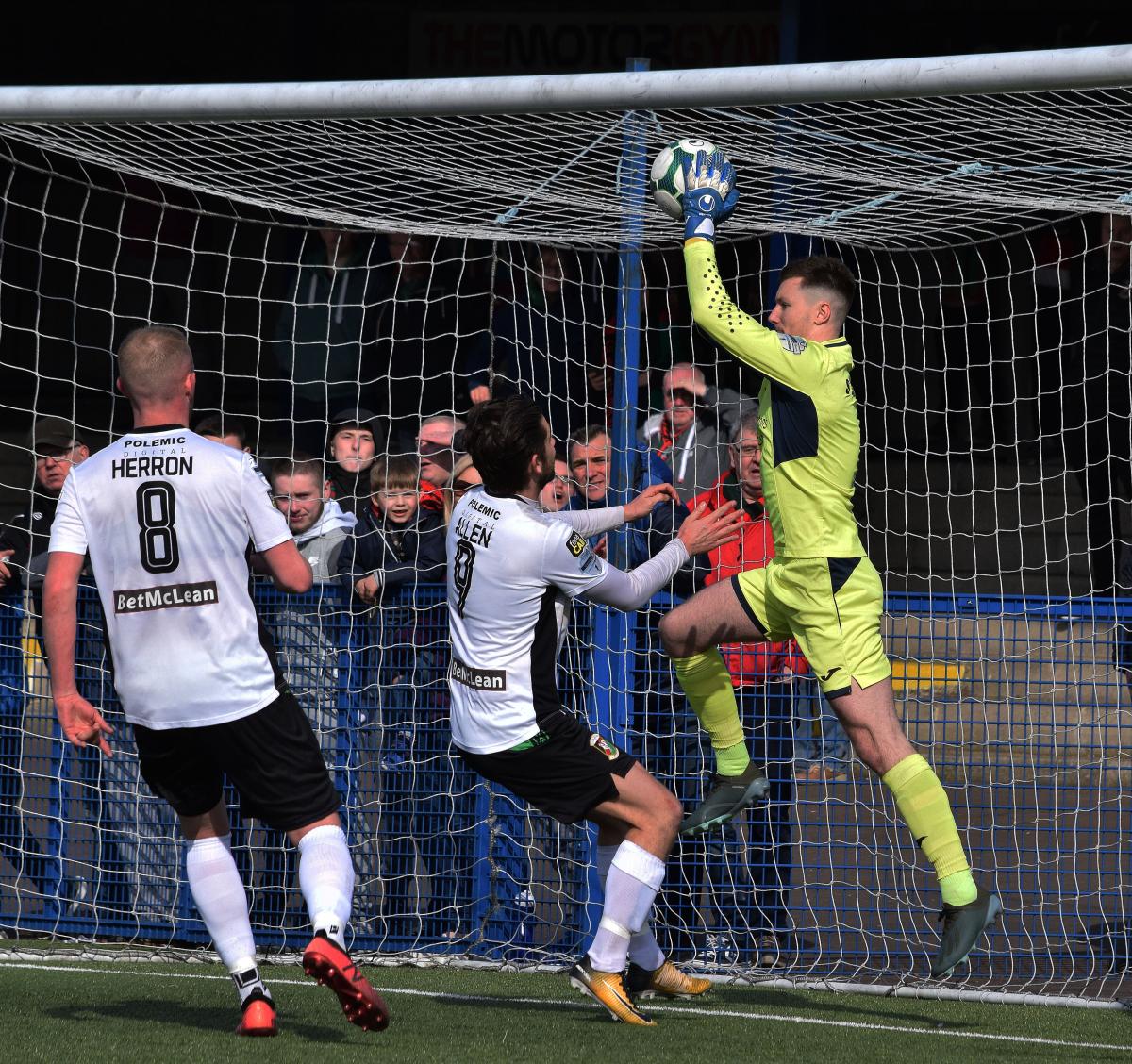 Glentoran pressed for an equaliser but despite the dismissal of Jonny Taylor 4 minutes from time (2nd yellow) a winner could not be found. Next up for Glentoran a tricky trip to Newry City on Friday evening. 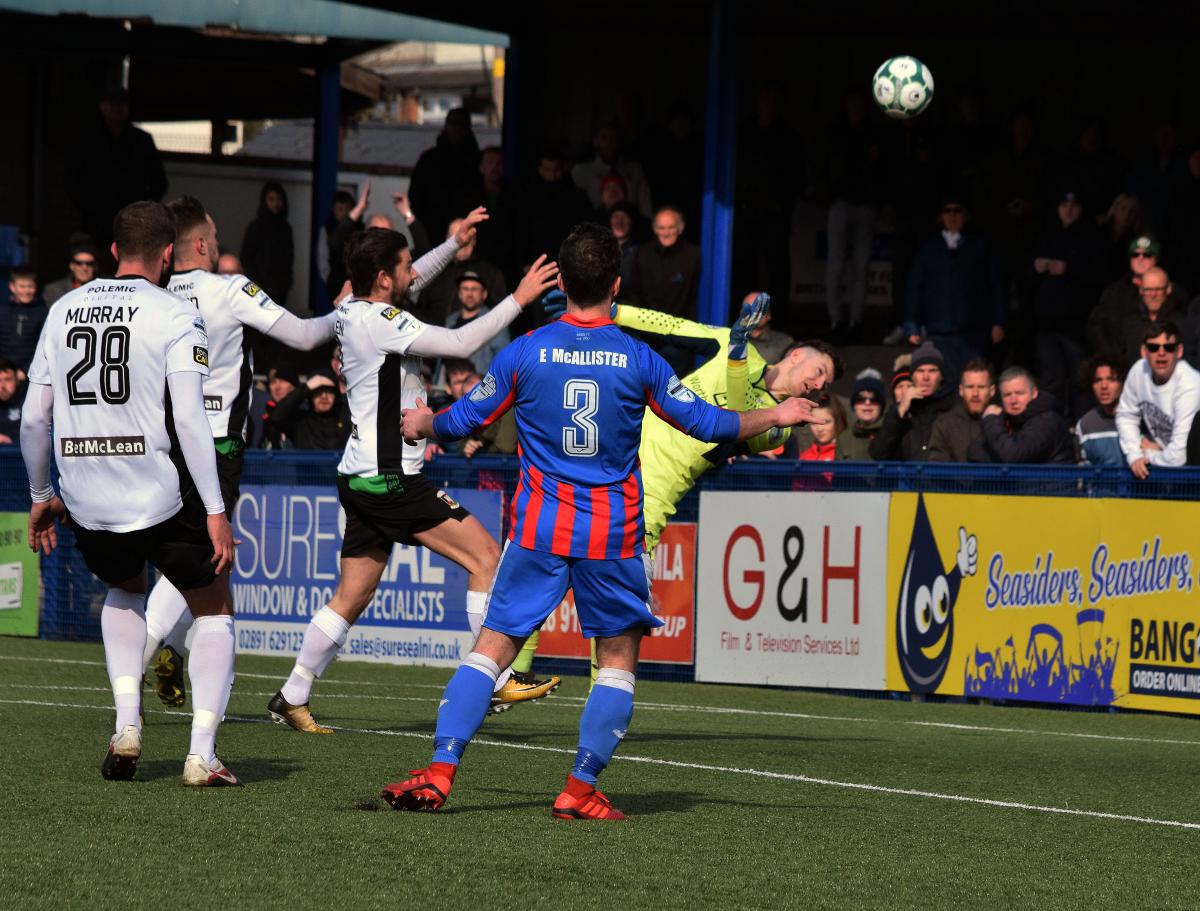