Curtis Allen's early goal was enough to secure all 3 points for Glentoran in their Danske Bank Premiership match away to Ards. 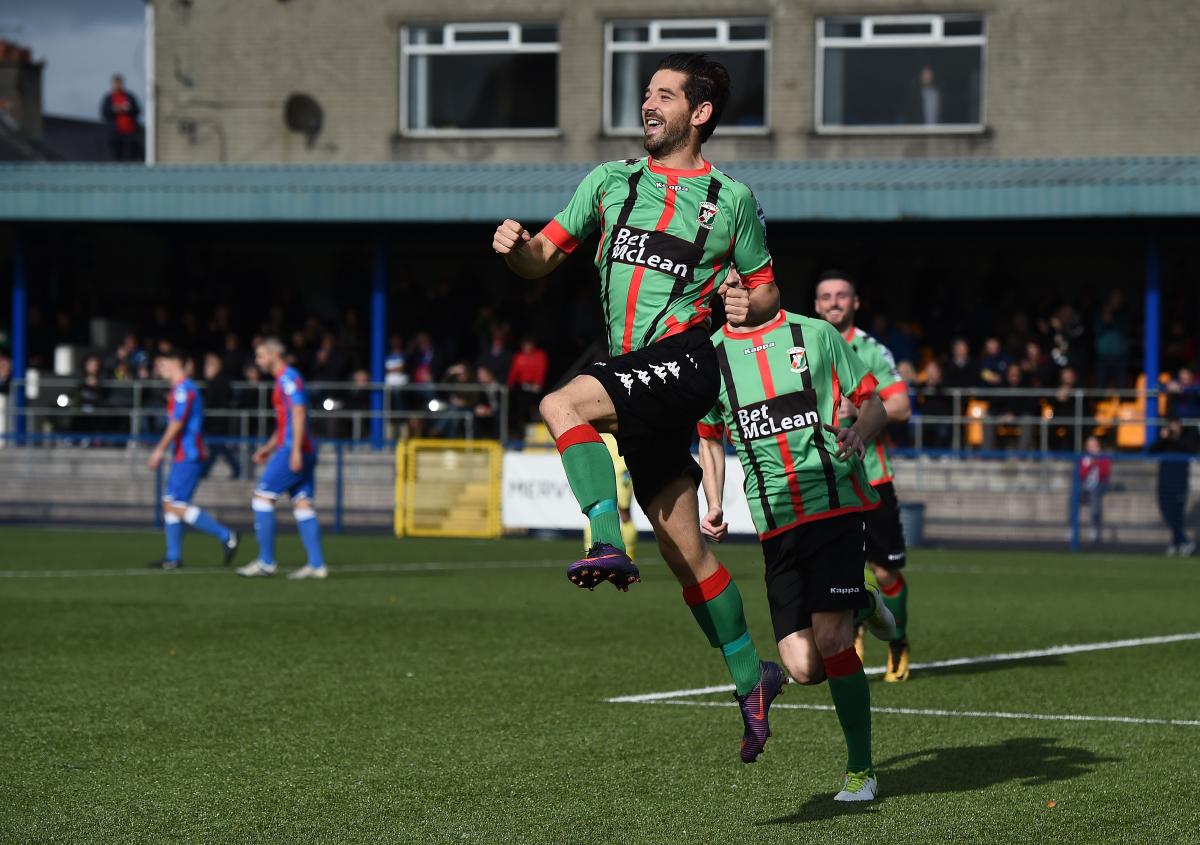 Following the wind down of the camera lights and the comprehensive defeat to Crusaders on Monday night, it was back to reality with a trip to the seaside to face Oval legend Colin Nixon’s Ards side.

Manager Gary Haveron made three changes to Monday night's midfield with Eoghan McCawl and Tiarnan McNicholl starting alongside James Knowles who was playing just in front of the back four.  Within the first thirty seconds of the game, it looked as if the Glens were going to be caught early napping again when straight from the kick off, Ards attacked up the left hand side with the resultant cross finding an unmarked Gary Ligget who should have done better when he fired wide. However just seconds later the ball fell to the in Curtis Allen, who in ample space chipped the ball into the top left corner of the Ards net,;one nil to the Glens. 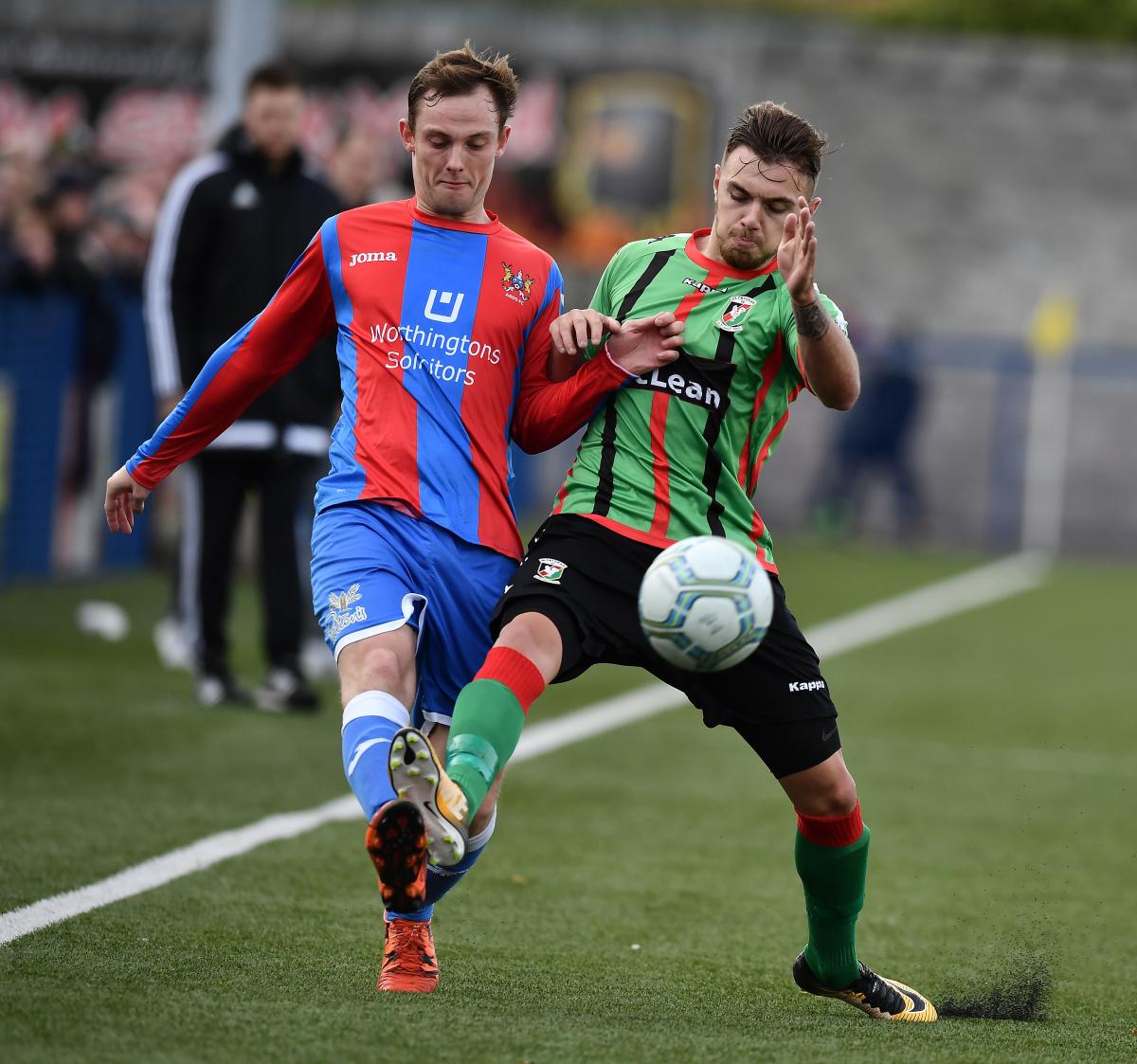 Minutes later, a free kick was awarded to Ards, where the yet again unmarked Gary Ligget seen his free header from the cross rebound off the bar. Following the frenetic start, the game was starting to settle down, with both sides pushing forward which was making for an entertaining encounter.   In the 19th minutes, Robbie McDaid was booked for an alleged dive, a harsh decision which would prove costly for him later in the game. Although it was the Glens who looked more dangerous, Ards were by no means out of the contest.  In the 26th minute following a good build up involving Ligget, Jonny Frazer headed just wide of the post. 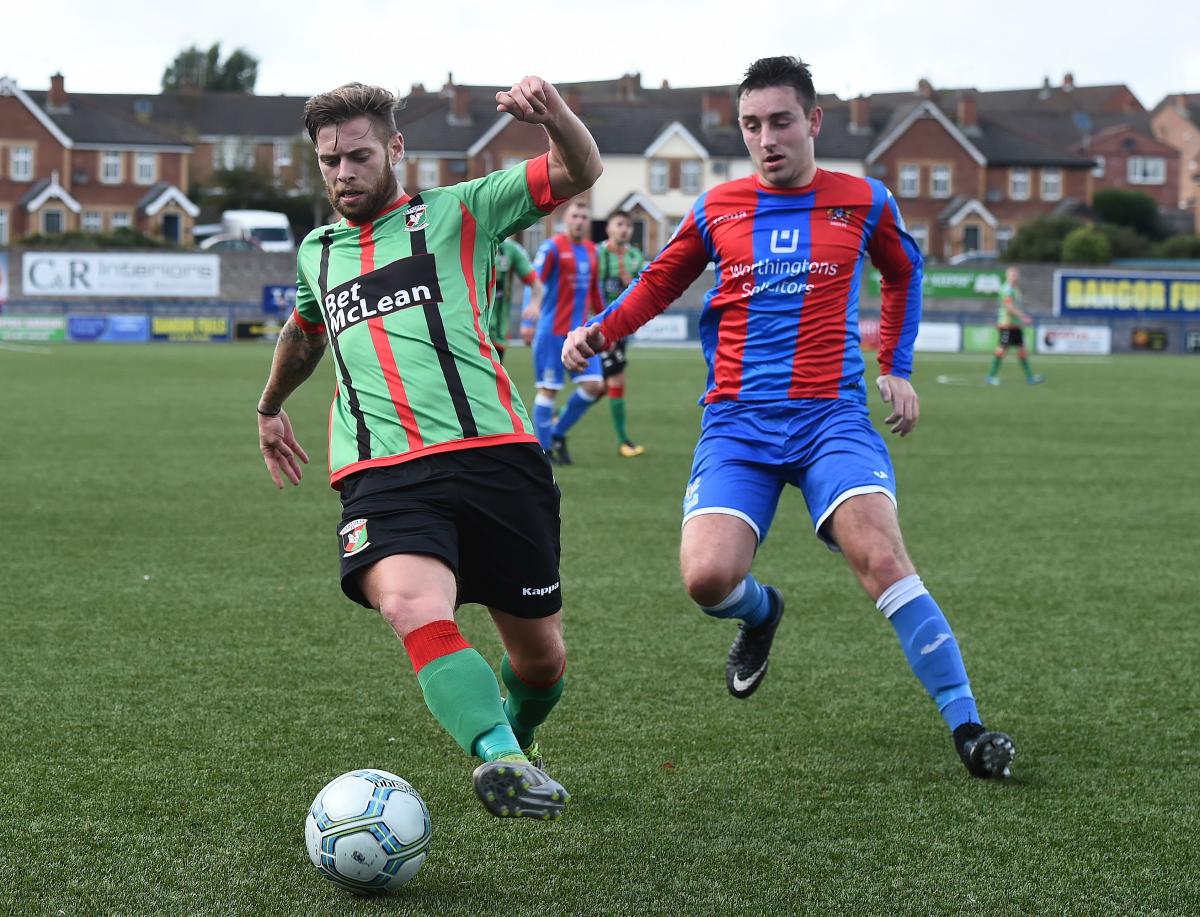 A feature of the game were the excellent corner kicks coming in from James Knowles which put constant pressure on the Ards defence.  It was Knowles on the 32rd minute who produced a fine piece of ball control into Ards box, with Marcus Kane heading just wide of the far post.  At the other end of the pitch, it was Calum Birney who came to the Glens rescue with an excellent last ditch tackle on Ligget who was about to pull the trigger. Five minutes from the break, the Ards keeper got his hand to a back pass with the resultant free kick just yards from the goal line causing no real problems for the Ards defence.  Just before the ref sent the players in for half time, the experienced Ligget yet again caused concern when he broke between the two Glentoran central defenders.  After clattering down from the joint attention of Birney and Addis , the referee rightfully judged no penalty. 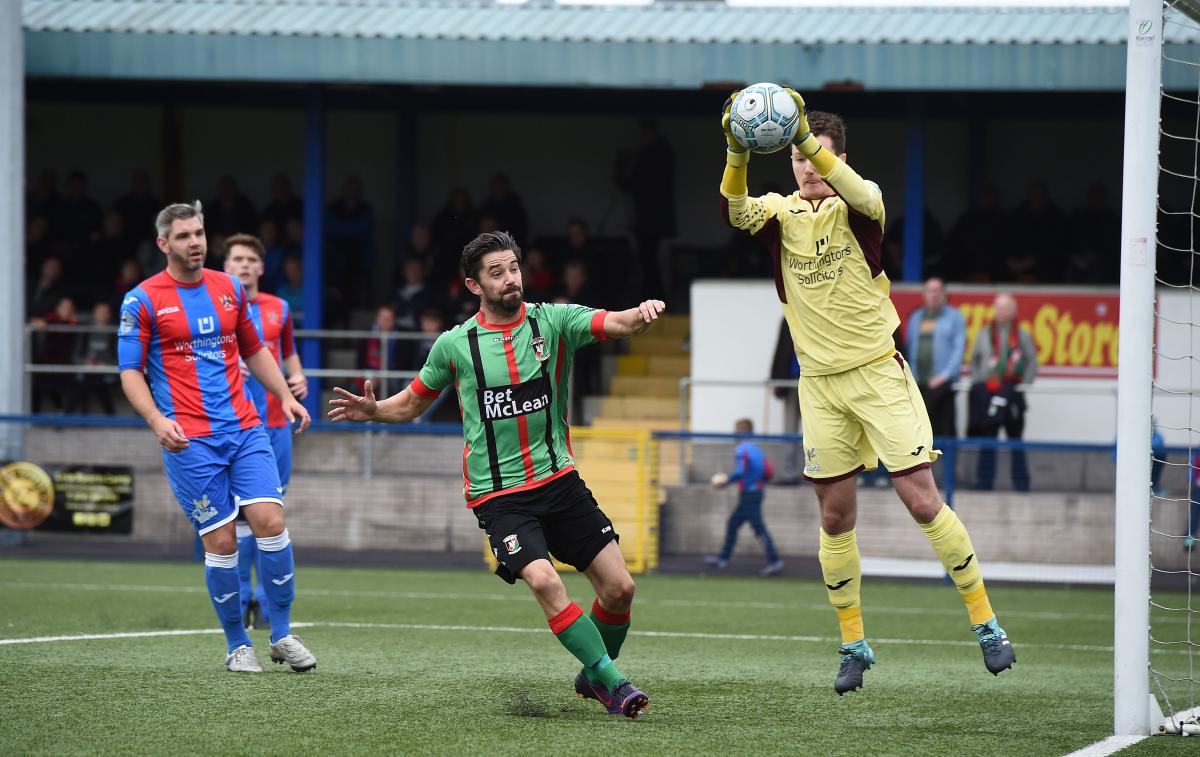 The second half started in some style for the Glens, with Nathan Kerr heading just wide from a good McNicholl cross.  Five minutes later, McDaid made a strong run towards the box but was cynically body checked just outside the box by the ever present Elbert.  A fiercely whipped in corner from Knowles resulted from the free kick, with McDaid seeing his header cleared off the line by the Ards defence. 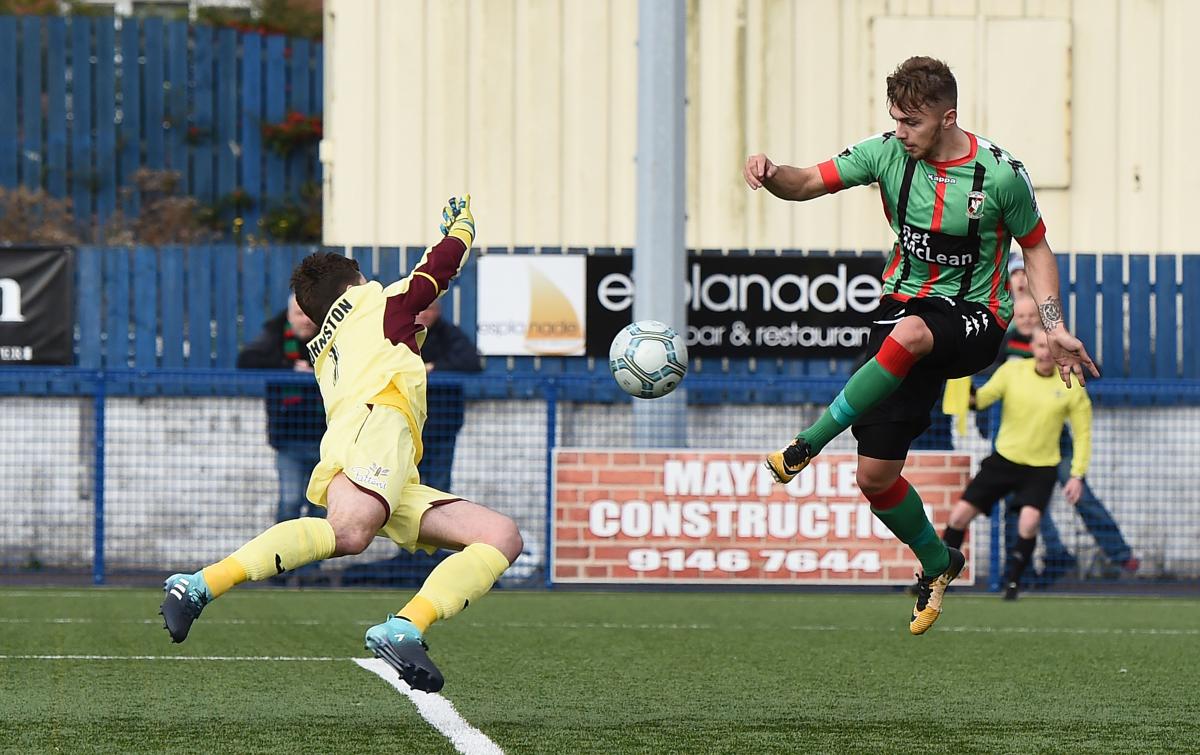 Ards retaliated minutes later with the Glens needing Ross Redman to be on his metal following a goal bound attempt by McAllister.  On the 19th minute, it was the Glens who yet again had another chance.  From twenty five yards out, McCawl hit a low hard dive.  The Ards keeper spilled the powerful shot, only for the rebound to be neatly tucked away by McDaid.  The travelling support joy was however short lived when the linesman flagged for offside.  Just a minute later, the flow of play had changed direction with Frazer hitting a long range pile driver which was well deflected by an ever alert Elliott Morris. 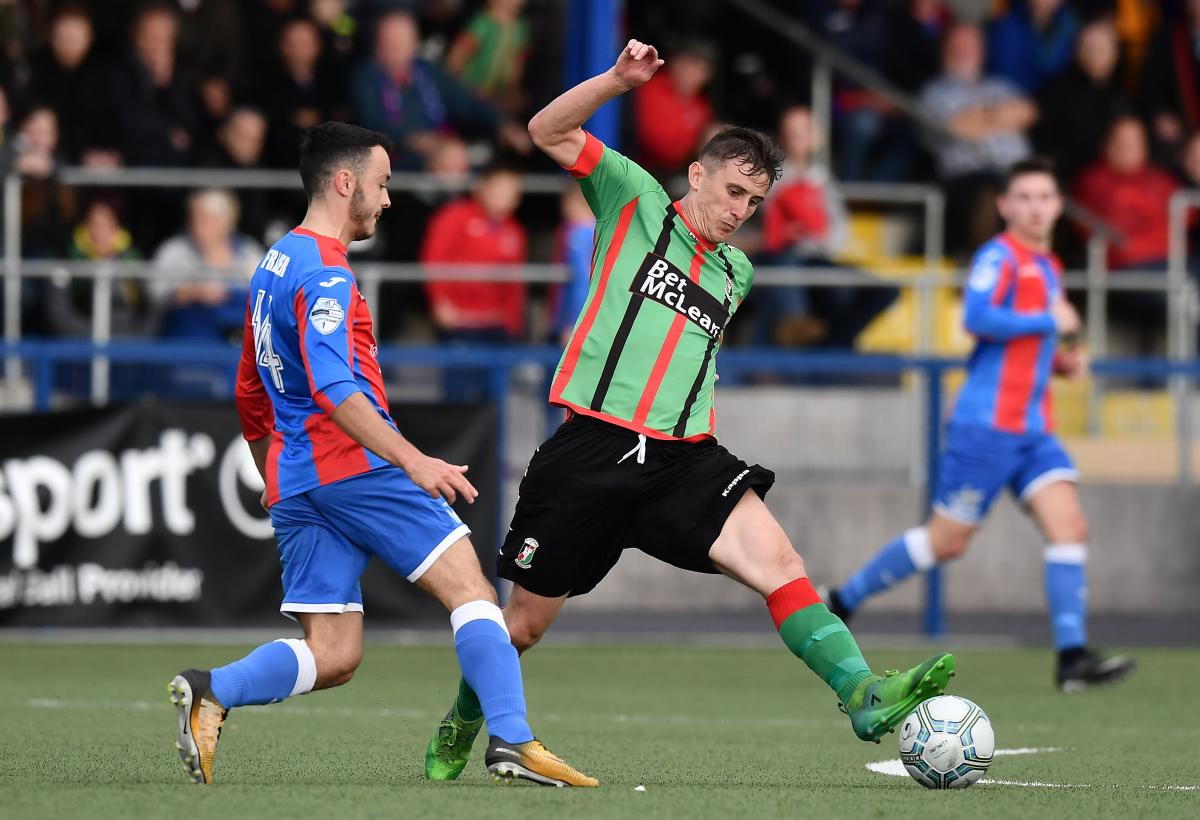 The next period of play was broken, being dominated by substitutions for both teams, Conal Delaney and Stevie Gordon replacing McNicholl and McCawl respectively.  With ten minutes to go, it started to look like the Glens would play out time by keeping control of the ball.  However, by falling back deeper they were allowing Ards to push forward in their quest to seek the equaliser.   In the 88th minute, Ards attacked down the left hand side with a clumsy tackle resulting in an Ards free kick which they instinctively wanted to take early.  McDaid was adjudged to have been slow retreating the 10 yards from the ball and following words with the linesman received a yellow card.  Following a time delay, the referee remembered he had already booked McDaid, with the red card subsequently being pulled out of the pocket.  A harsh decision for the in-form striker especially given the circumstance of his first yellow.  When the free kick was eventually taken, Ards were lucky not to equalise with the ball striking the base of the post, with Elliott Morris beaten. 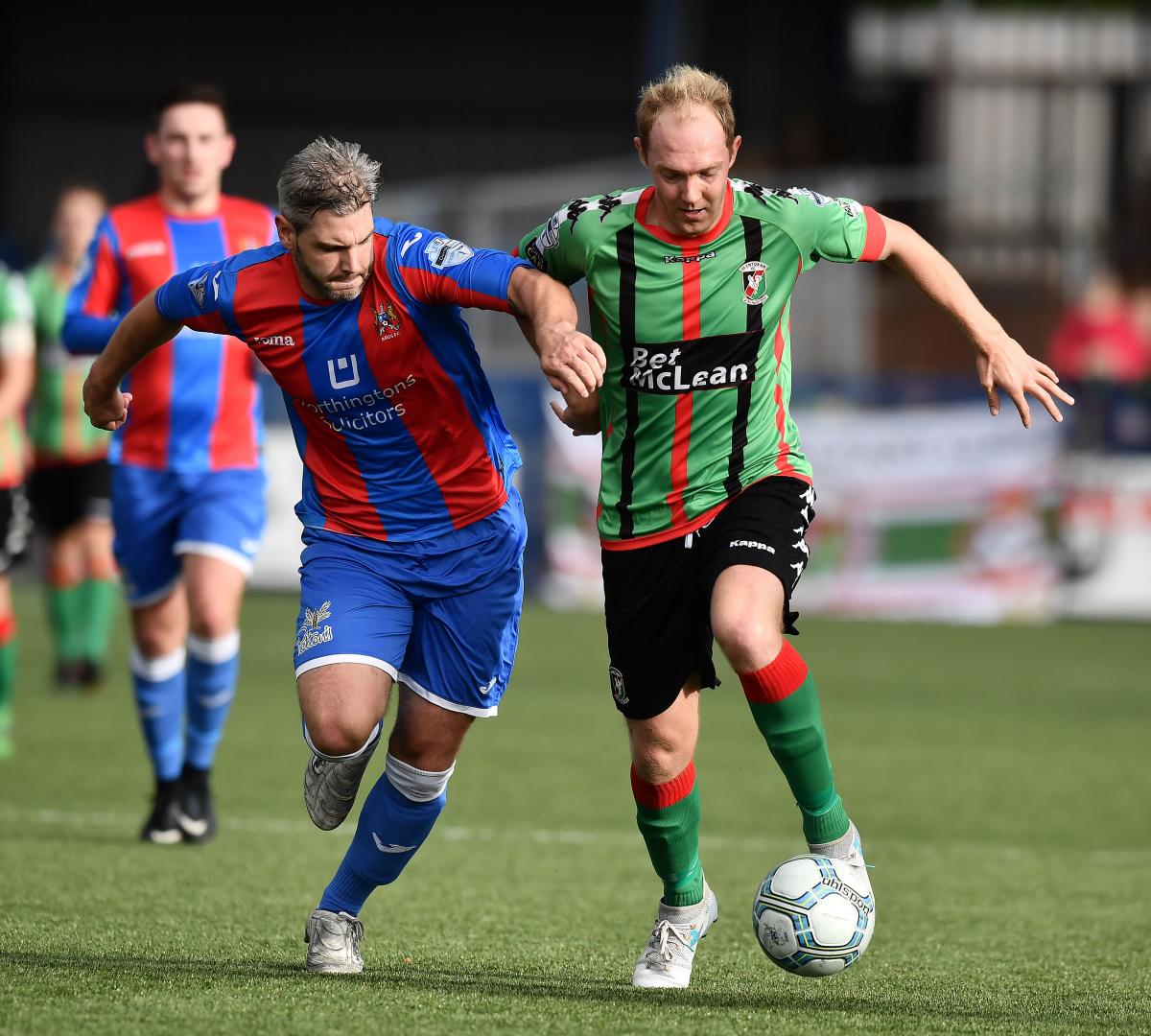 The fourth official indicated a surprising four minutes extra time, with the Glens ten men hanging on as Ards started to throw caution to the wind.  However, against the run of play, Delaney broke clear on the left and raced towards goal, and at the last minute just before he reached the box, Frazer upended him with a professional foul.   The referee had no hesitation in producing the red card much to Colin Nixon’s fury.  Straight after the resultant free kick, the final whistle blew.

Three hard earned points secured.   This was a game that had most of its talking points in the first and last ten minutes, but was still entertaining in the intervening minutes - who says low scoring games are boring! 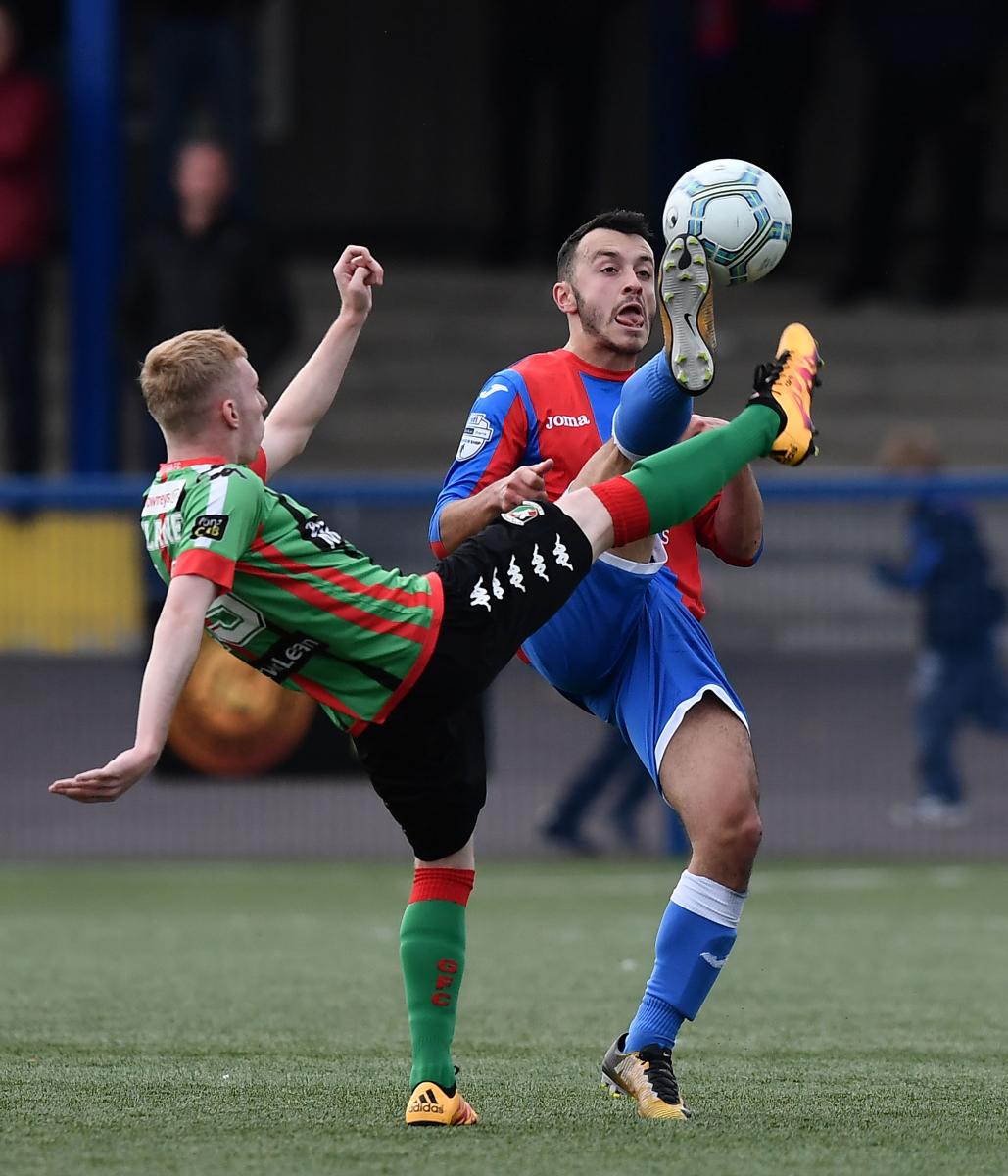