10 man Glentoran take a point off the league leaders

Glentoran played most of this top of the table clash with 10-men and although they didn’t take the 3 points which would have put them top of the Danske Bank Premiership, they did retain their unbeaten record and kept their first clean sheet of the campaign. 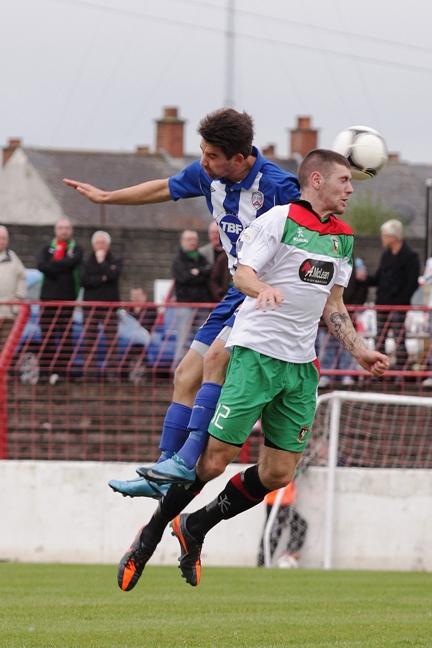 Both teams started the game cautiously and other than a couple of long range efforts from David Scullion (3) and Jim O’Hanlon (6) there was nothing to threaten either goal in the first quarter of an hour. Glentoran’s leading scorer, Andrew Waterworth broke away on 16 minutes and totally outpaced David Ogilby. The big defender pulled him back on the edge of the area and received a yellow card. The Glens went close to opening the scoring on 20 minutes when they were awarded a free kick down the left hand side, level with the 18-yard line. Stephen Carson fired the ball into the area and it looked destined for the top corner but Gavin Cullen made a decent save. On 35 minutes good link up play between Richard Clarke and Jim O’Hanlon ended with O’Hanlon shooting over. The whole pattern of the game changed on 37 minutes when referee Raymond Crangle dismissed Mark Clarke for a dangerous tackle. It was the 6th red card of Clarke’s career; 5 of them coming from Crangle!

At the break Eddie Patterson introduced David Howland to central midfield, Howland replacing Jim O’Hanlon. Coleraine had the chance to go in front on 49 minutes after Curtis Allen found space in the area. As he was about to pull the trigger, team mate Stephen Lowry tried his luck but his shot was well off target. A minute later Allen went down in the area and appealed for a penalty. The referee waved away the appeals but opted not to take any action against Allen. Michael Hegarty 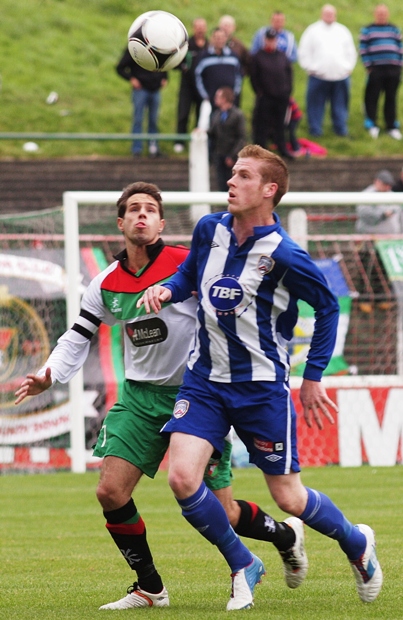 went into Mr Crangle’s notebook on 52 minutes following another late tackle on Richard Clarke. 6 minutes later Heggarty committed a similar tackle on Clarke but somehow escaped further punishment. In between those two incidents Elliott Morris made two excellent saves. The first came when a dangerous ball into the area from Ryan McIlmoyle was deflected and Morris did well to hold on to it. Moments later Darren Boyce looked to be in on goal but Morris was quickly off his line to smother the ball. Jason Hill bizarrely found himself picking up a yellow card after an excellent tackle on the edge of the Coleraine area on 57 minutes and the home fans were understandably frustrated. On 68 minutes substitute, Richard Gibson’s effort broke to Andy Waterworth. Waterworth made room and slotted the ball past Cullen only to be denied by an offside flag. In stoppage time a deep cross into the Glentoran area glanced off the head of Curtis Allen and went narrowly wide of the far post. A minute later Andy Waterworth burst into the Coleraine box but a last ditch tackle from David Ogilby denied Andy, what would have been, a dramatic winner.