Ten man Glentoran moved into third place in the table after continuing their impressive run of form with this hard fought victory at Stangmore Park.  Manager Eddie Patterson was forced into one change from last week’s trip to Ballymena, Stephen McAlorum coming in after suspension to replace Jim O’Hanlon who was suffering from a hamstring injury.

There was little to choose between the sides in the opening exchanges with neither goalkeeper troubled until Elliott Morris comfortably saved a Jamie Douglas free kick in the 10th minute.  Seven minutes later James Costello was denied by a superb last ditch challenge from Jason Hill on the edge of the six yard box.  Approaching the half hour mark the game finally sprang into life and it was Glentoran’s man of the moment, Jordan Stewart, who lit the blue touch paper.  The young winger’s trickery along the left bamboozled three Dungannon defenders and he was only stopped by a crude challenge from James Costello, the number ten picking up a yellow card from referee Arnold Hunter.  The resulting free kick was swung in by McAlorum and home ‘keeper Niall Morgan made a hash of his attempted catch, dropping the ball at the feet of Marcus Kane who was able to poke home from close range.  Unfortunately for the visitors their lead was to last only a minute as the defence wasted several opportunities to clear, allowing Douglas to make a run into the box where he was brought down by a clumsy challenge from Richard Clarke.  Referee Hunter pointed to the spot and former Glentoran striker Darren Boyce stepped up to confidently drive the ball into the roof of the net.  Before half time Dungannon’s Terry Fitzpatrick was perhaps fortunate to receive only a yellow card for another crude challenge on Stewart. 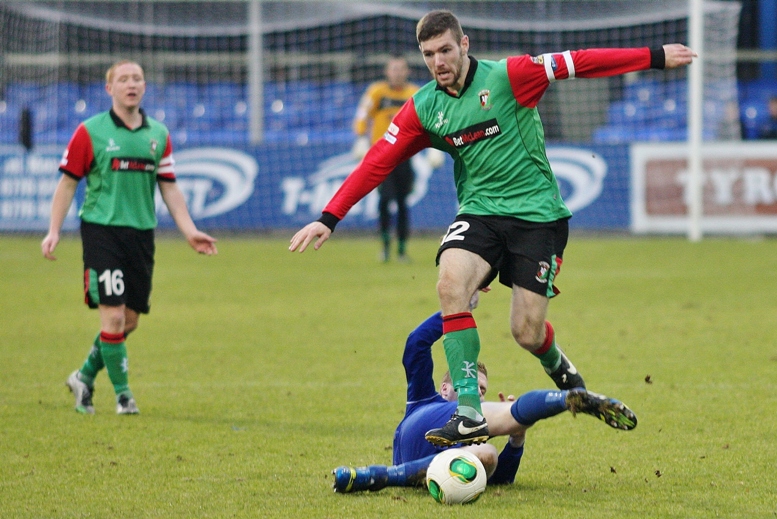 After the break the pattern continued as, within a minute of the re-start, Stewart was the target of two scything challenges as he went on a trademark run.  Thankfully the emerging star was nimble enough to avoid them or he could have suffered serious injury and Adam McMinn became the third Dungannon player to go into the referee’s notebook for a challenge on him.  The Glens had started the second period very much on the front foot but 7 minutes in their task became much more difficult.  Jimmy Callacher chose to try to control rather than clear a long ball from the Dungannon defence but gave away possession to Douglas.  As the Dungannon striker bore down on the Glentoran box Callacher brought him down from behind, a clear yellow card which, added to one he had received for dissent in the first half, saw him sent to the dressing room.

For a brief period the Glens were clearly rattled and could easily have gone behind, McCaffrey striking the bar with the resulting free kick and three minutes later Boyce should have put Dungannon ahead when he capitalised on a mistake from Mark Clarke but pulled his shot badly wide.  Patterson decided to plug the gap at the back, bringing on Jay Magee in place of Richard Clarke and the visitors began to get a foothold on the game once again.  Despite being a man down the Glens were enjoying some good possession but there was little threat to the Dungannon goal save for a Stewart shot which was easily dealt with by Morgan.  However with 8 minutes left they snatched a winner from the unlikeliest of sources.  A Jason Hill corner was only partly cleared and the Glens kept possession with some neat passing.  The ball was finally delivered by Marcus Kane to the far post where Hill had remained unmarked and the veteran full back sent a first time left foot volley high into the net much to the delight of the travelling support.  In the closing minutes Dungannon pushed forward in search of the equaliser but the Glens defence held firm, the only nervous moment coming in the third minute of stoppage time when Boyce had a half chance but sent his header over the bar.

So another impressive display on the road and Eddie Patterson will be hoping that his players will bring that sort of form to the Oval for the visit of Glenavon next Saturday. 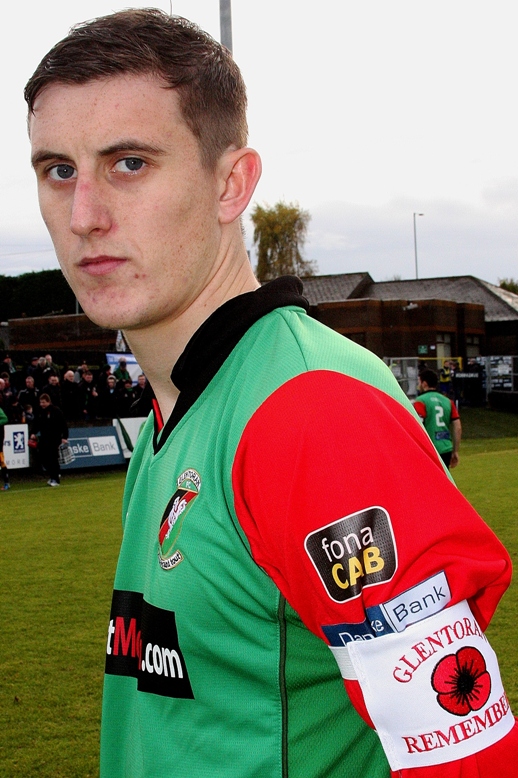