Glentoran produced an excellent performance at Shamrock Park this evening with Conor McMenamin, Hrvoje Plum and Jay Donnelly all on the scoresheet. 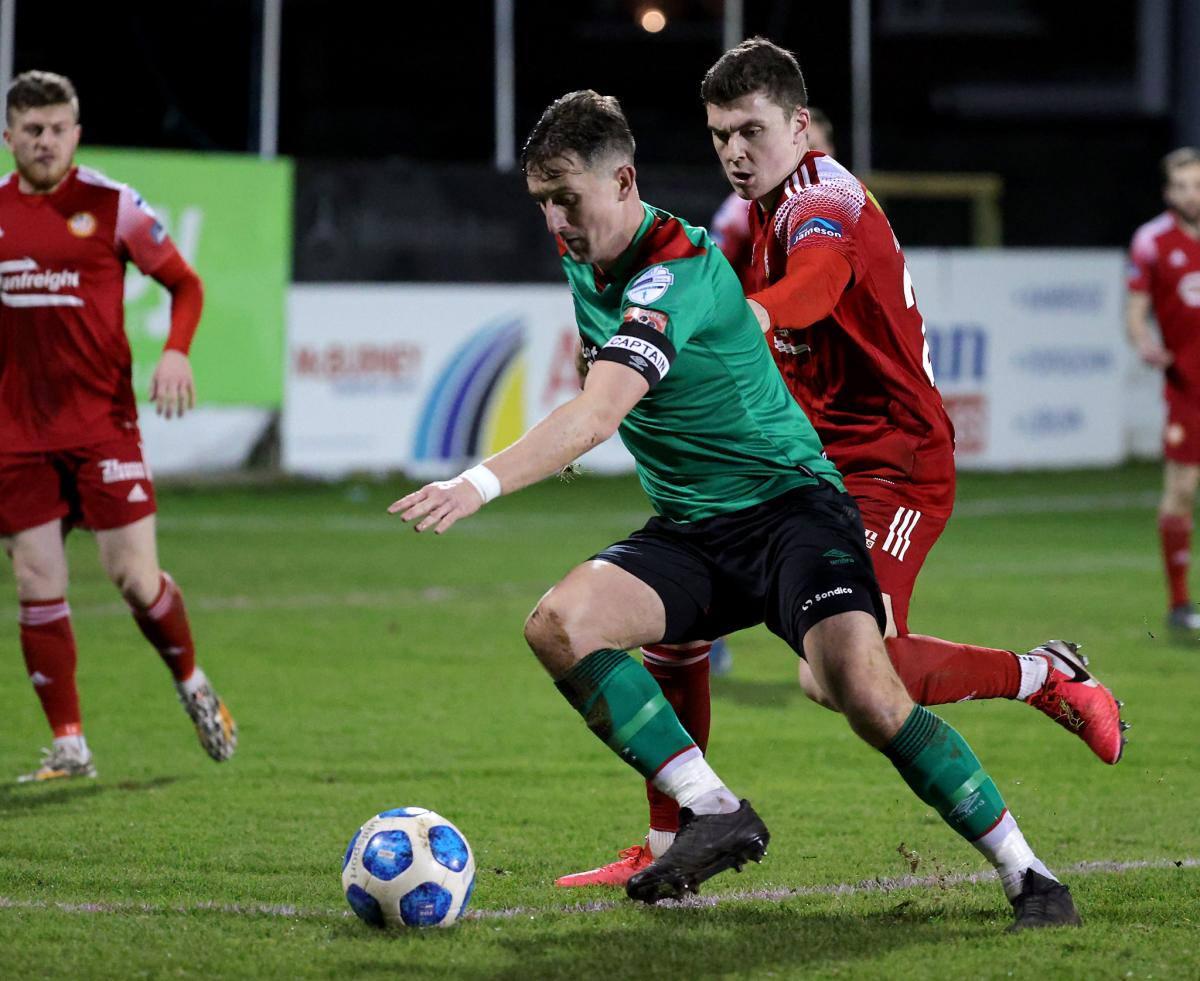 Manager, Mick McDermott was able to field his frightening strikeforce of McDaid, Jay Donnelly and McMenamin for the first time and the home side struggled to live with them for the majority of the 90 minutes.

Perhaps the only negative on the night was the number of missed chances but the three points were comfortably secured and Glentoran moved into the top six with games in hand on all the teams above them. 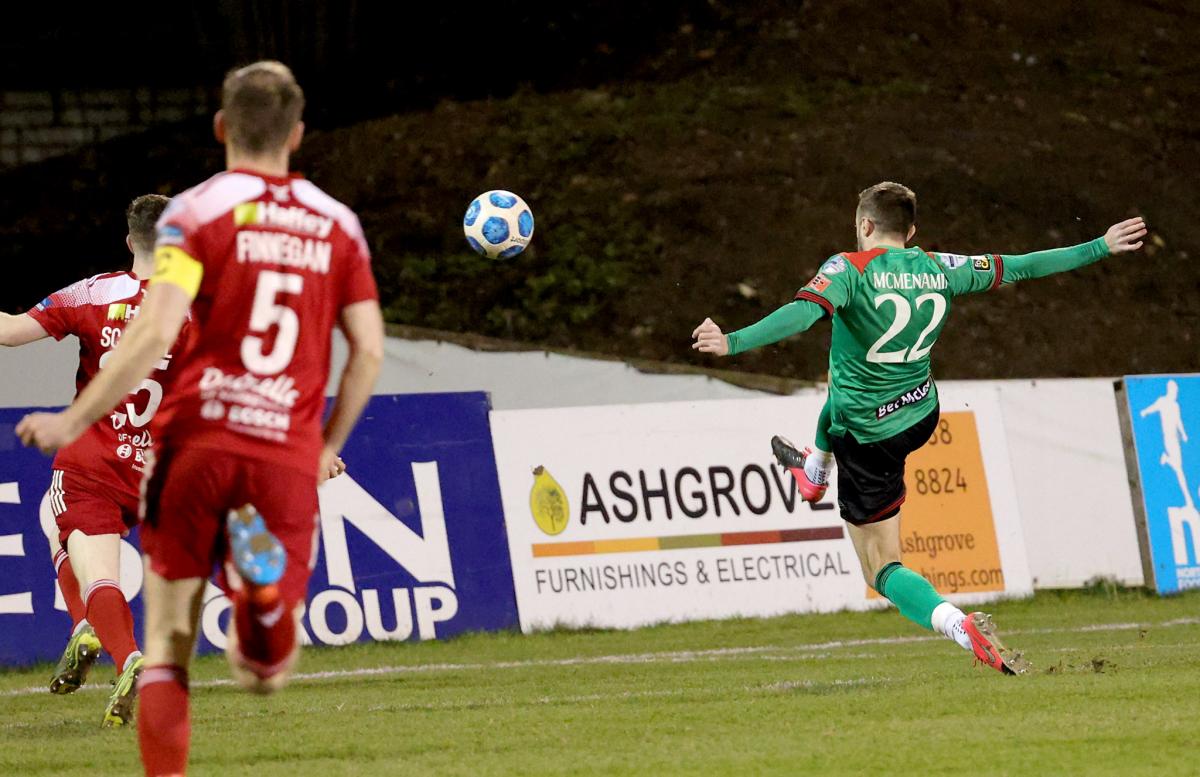 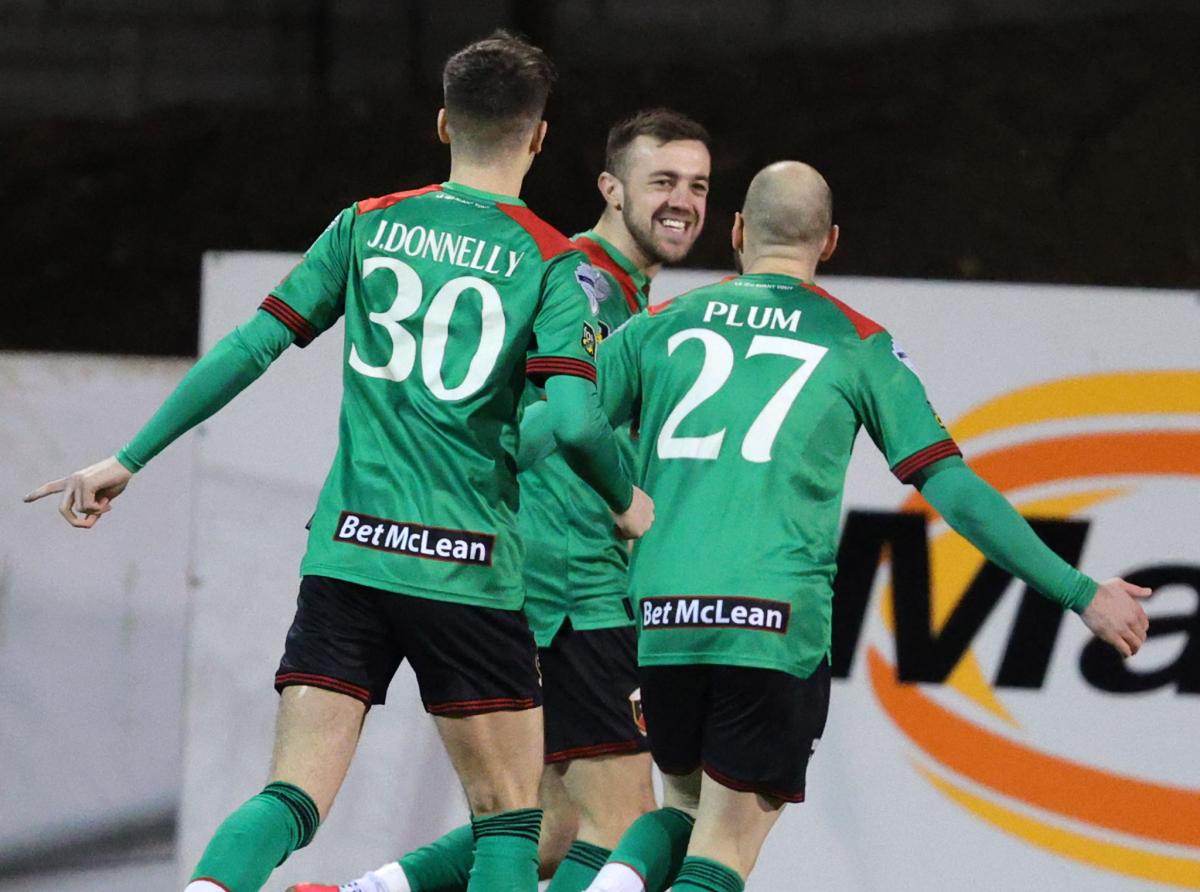 With just 2 minutes played the Glens stormed in front with a magnificent goal. Hrvoje Plum played a majestic pass to Robbie McDaid on the left and his driven cross was met by Conor McMenamin who volleyed it back across the keeper and into the corner of the net from 6 yards out.

Portadown responded though and after Cricky Gallagher was penalised the home side's free kick into the box was headed goalwards only for Dayle Coleing to produce an excellent save. The Glens then went straight down the other end and McMenamin's cross was turned just over his own crossbar by Ports skipper, Paul Finnegan. On the quarter hour mark there was another decent chance for the home side; Ruairi Croskery connecting with a cross from the right only to see Coleing produce another fine stop. 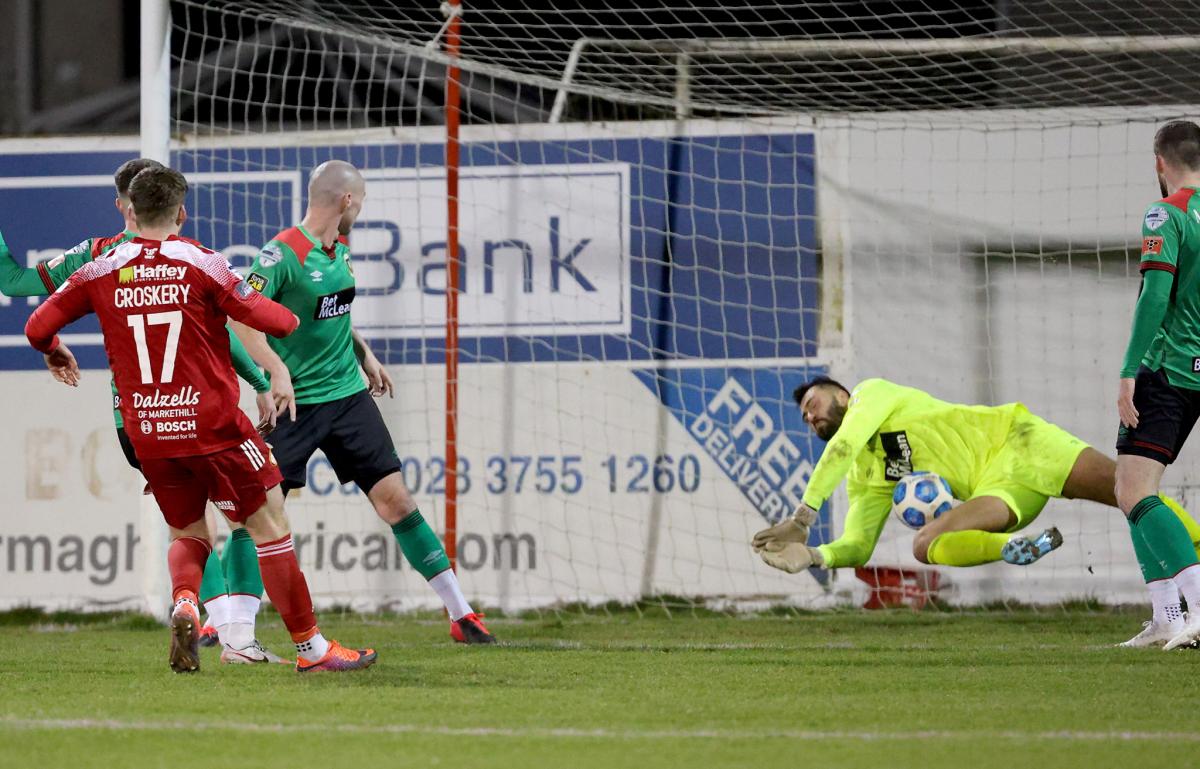 On 21 minutes Rhys Marshall, deputising at right-back for the ill Caolan Marron, produced a great driving run, going past a couple of defenders and then feeding Hrvoje Plum. The Croatian's driven cross was deflected past the post though for a corner. 3 minutes later another cross from the right from Plum was only half cleared and Conor McMenamin smashed it goalwards. His effort struck the inside of the post and went straight across the goal line before being cleared. 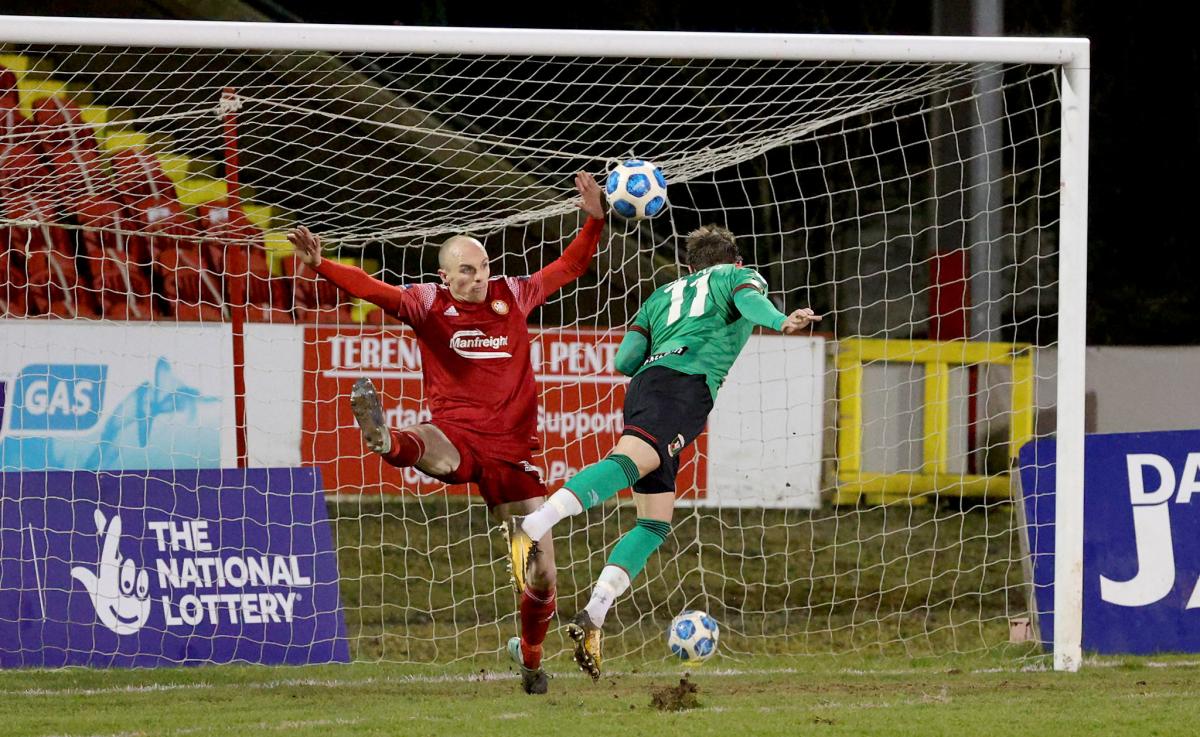 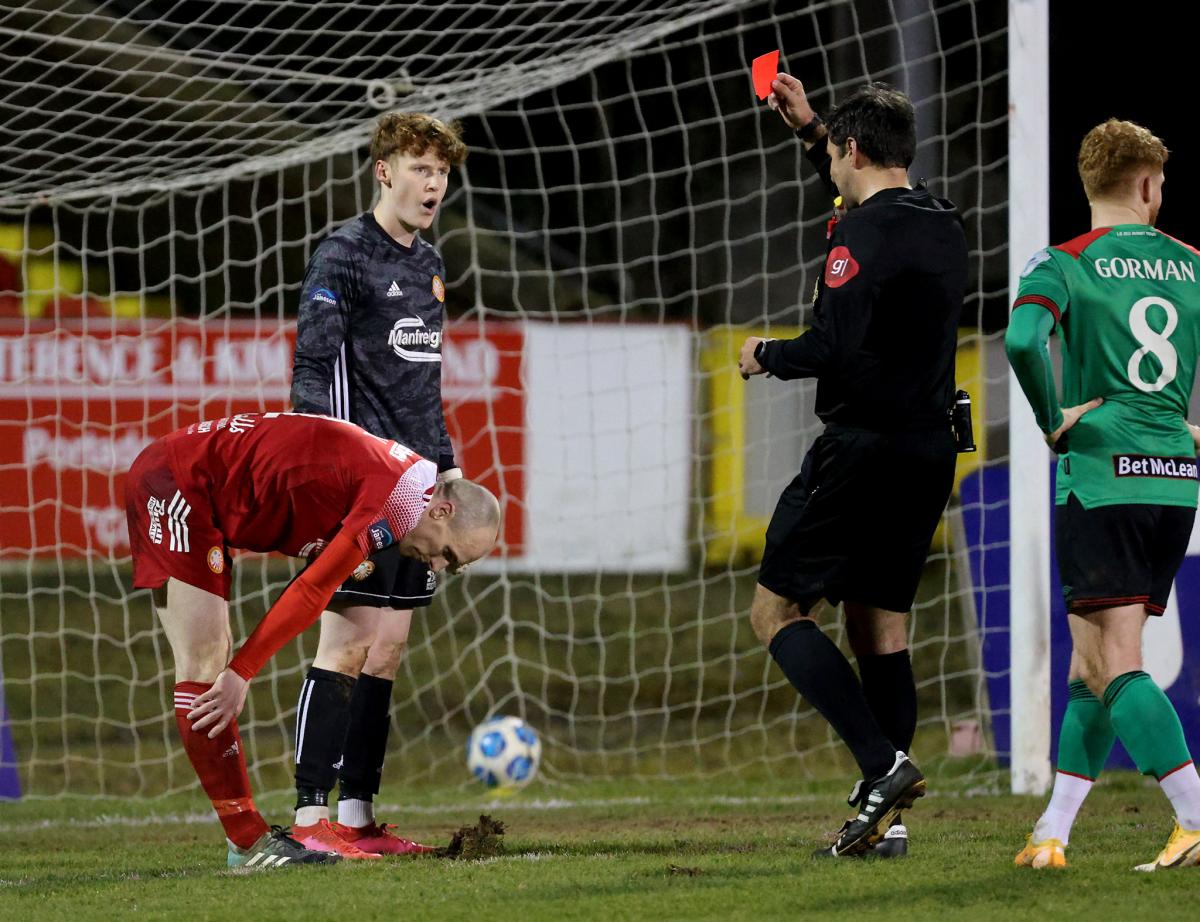 Glentoran doubled their lead from the penalty spot just before the half hour. An excellent long ball by Rhys Marshall was gathered by Jay Donnelly. He picked up the ball close to the junction of the goal line and 18-yard box, beating young Ports keeper Jacob Carney before crossing to find Robbie McDaid in the 6-yard box. McDaid met the ball perfectly but saw his goalbound effort kept out by the hand of Ports defender, Greg Hall. Referee Andrew Davey immediately pointed to the penalty spot and also produced a red card for Hall. Hrvoje Plum took the spot kick, finding the bottom corner to double Glentoran's advantage. 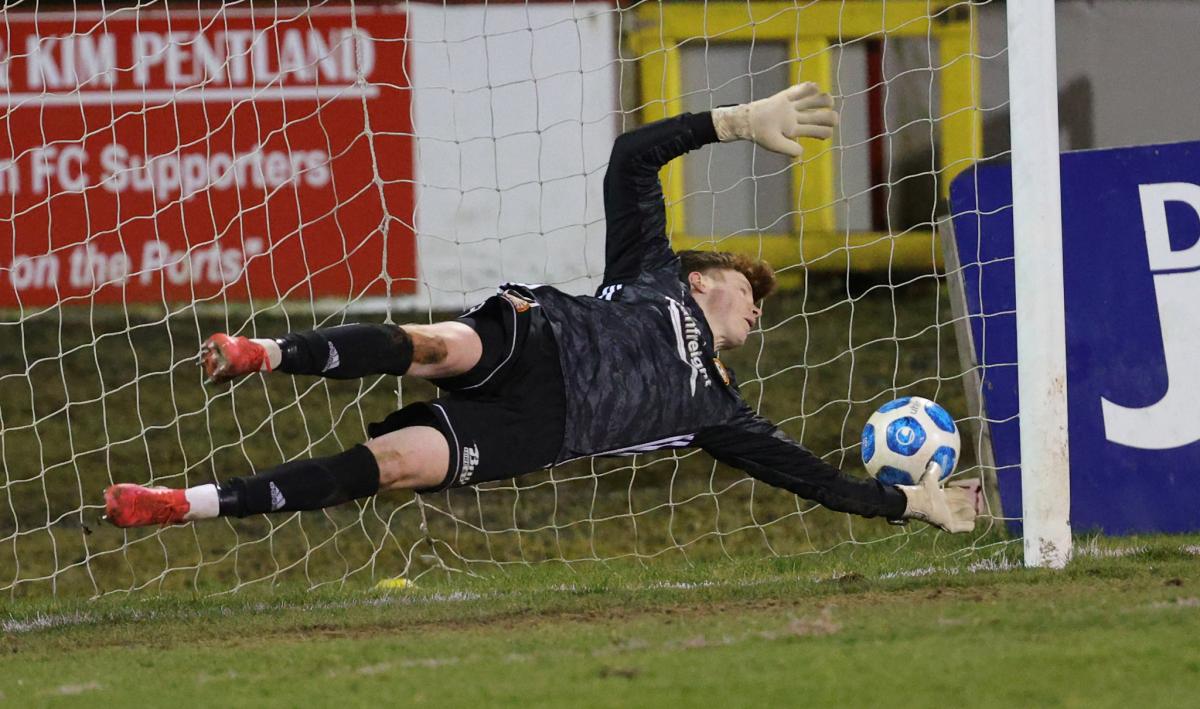 With the home side down to 10 men and trailing by 2 goals it wasn't surprising to see the Glens take a firm grip on the game, dominating possession and passing the ball around confidently. Conor McMenamin saw another shot go just wide on 33 minutes and 3 minutes later Robbie McDaid was also just wide of the target. Jacob Carney's kick out was poor though and the ball was won by Jay Donnelly who outpaced Finnegan and was left with a 1 v 1 situation with the keeper. Young Carney redeemed himself though, saving with his legs however the ball broke straight to Hrvoje Plum who uncharacteristically put the ball wide of the target.  Right on the stroke of halftime a McDaid cross was cleared to Dale Gorman on the edge of the area. He went for goal but his effort was just too high. 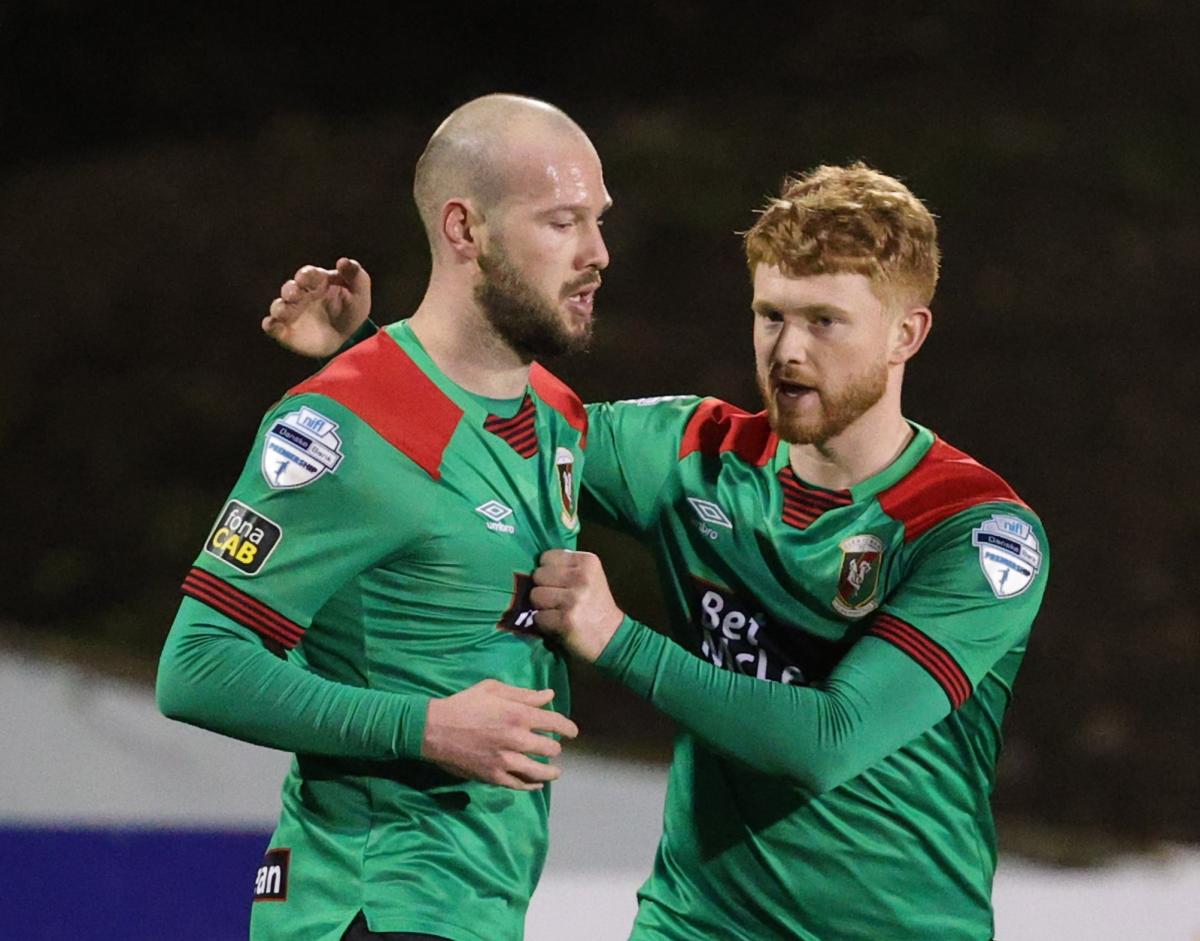 The Glens should have went 3 up 2 minutes after the interval. An outsanding through ball from the imperious Luke McCullough found Jay Donnelly however the young striker's first touch saw the ball run just too far in front of him and the keeper was able to gather. Portadown pulled a goal back on 49 minutes. A long punt down field by Jacob Carney was miscontrolled by Patrick McClean and Lee Bonis pounced to win possession and then fire past Dayle Coleing. Despite conceding, Glentoran continued to boss the game. McMenamin had another couple of decent efforts on goal on 50 and 53 minutes, the first being well held by the keeper and the second being turned behind for a corner. 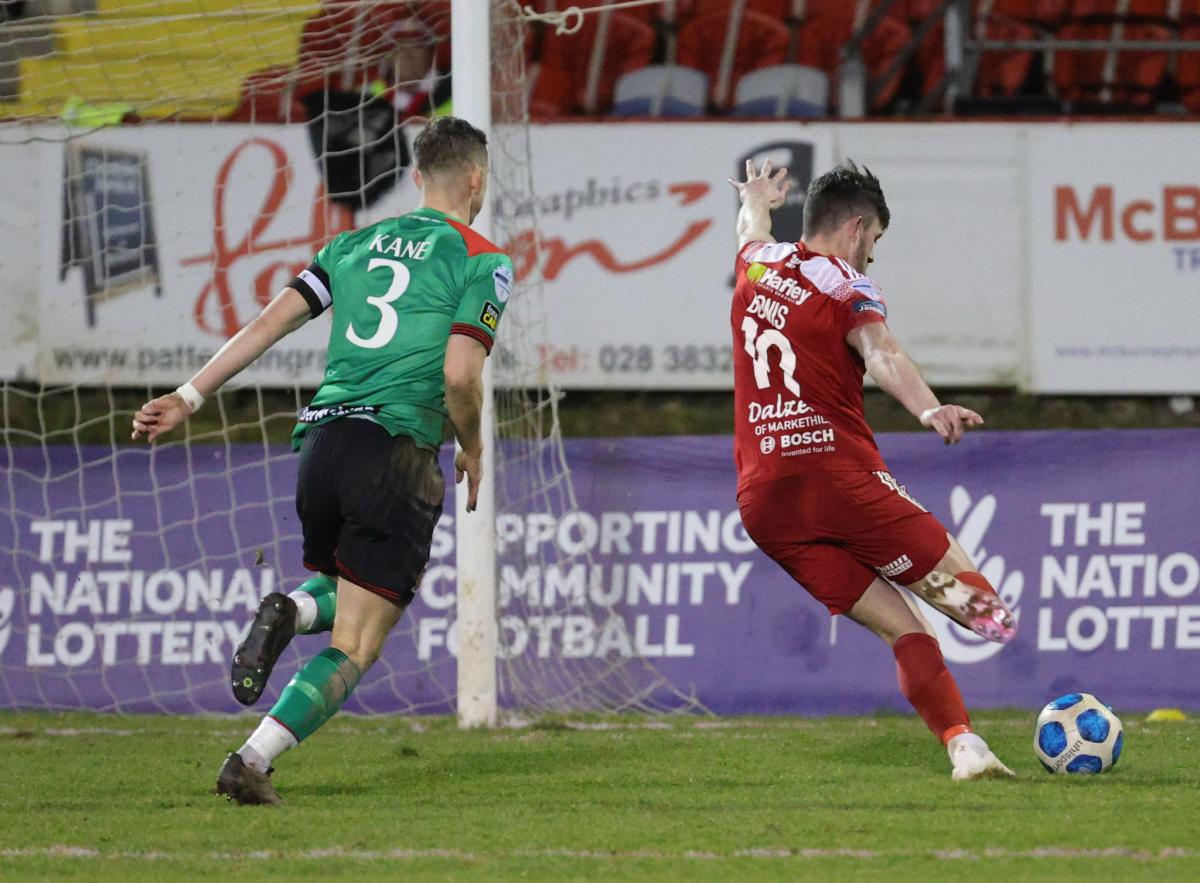 Jay Donnelly saw his header from a Plum corner blocked and then the same player had another effort deflected behind. From the resulting corner the ball was met by Luke McCullough beyond the far post. His header back across goal picked out Paddy McClean but he couldn't hit the target, heading wide of the far post. On 65 minutes Glentoran finally got the third goal their play deserved. McCullough found McMenamin about 30 yards from goal. He played the ball through to Plum who took it to near the by line before crossing into the 6-yard box where Jay Donnelly turned it home. 2 minutes later a neat passage of play between Plum and McMenamin ended with a ball over the top for McDaid to run on to. Unfortunately though, Robbie dragged his shot just wide of the post. 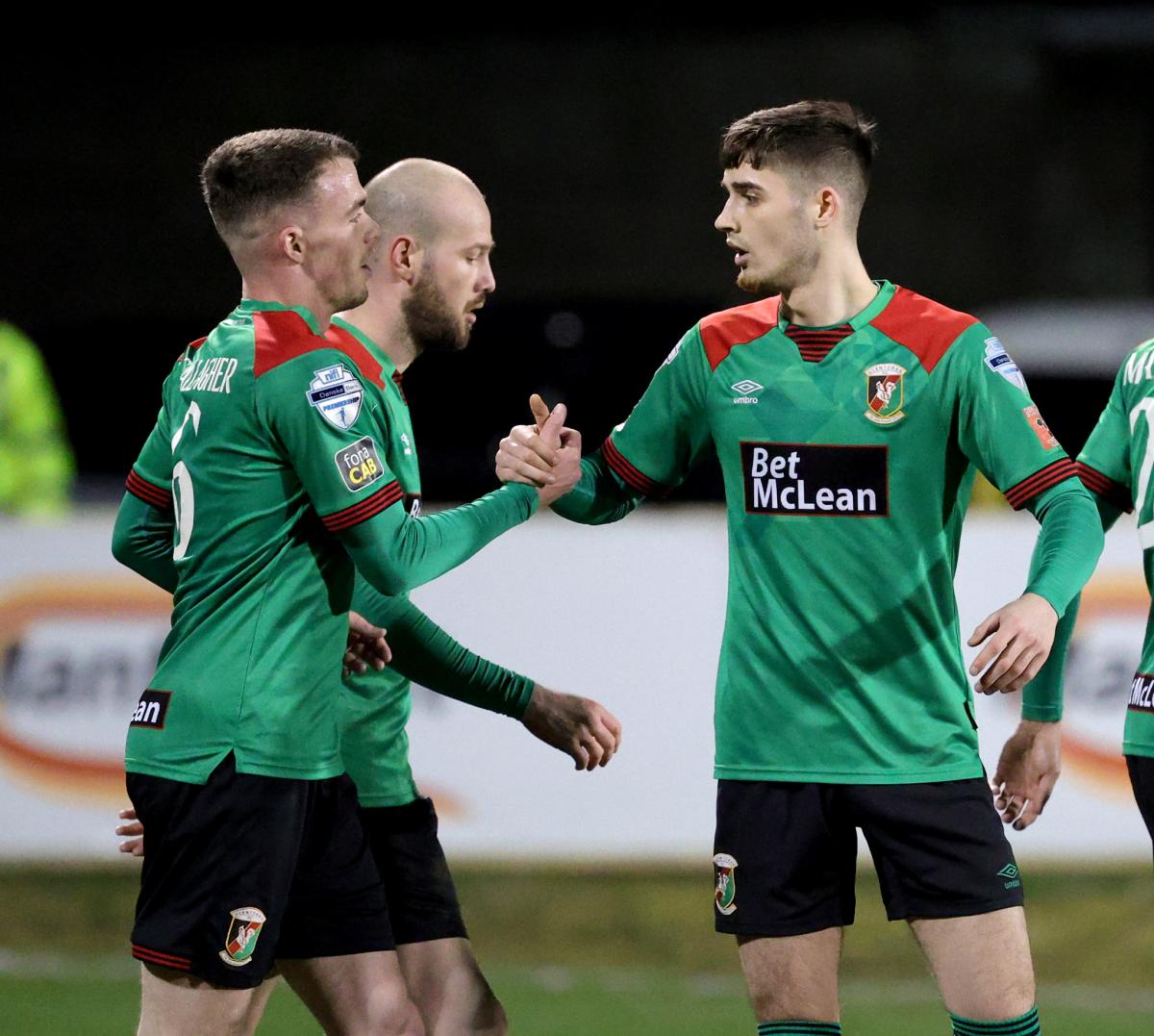 Rhys Marshall fired over the top (74) and then followed that up with an excellent run before cutting the ball back to Conor McMenamin who shot wide. McMenamin then almost turned provider on 80 minutes picking out substitute Ciaran O'Connor in the area. O'Connor met it perfectly but with Carney beaten the ball was headed off the goal line. Another substitute, Gael Bigirimana then saw his 25-yard free kick deflected over the bar. He took the resulting corner and when the ball was played back to him, flashed a cross shot right across the face of goal. That was quickly followed by another left wing cross from Marcus Kane. Jay Donnelly met it but his header was well saved by Carney. 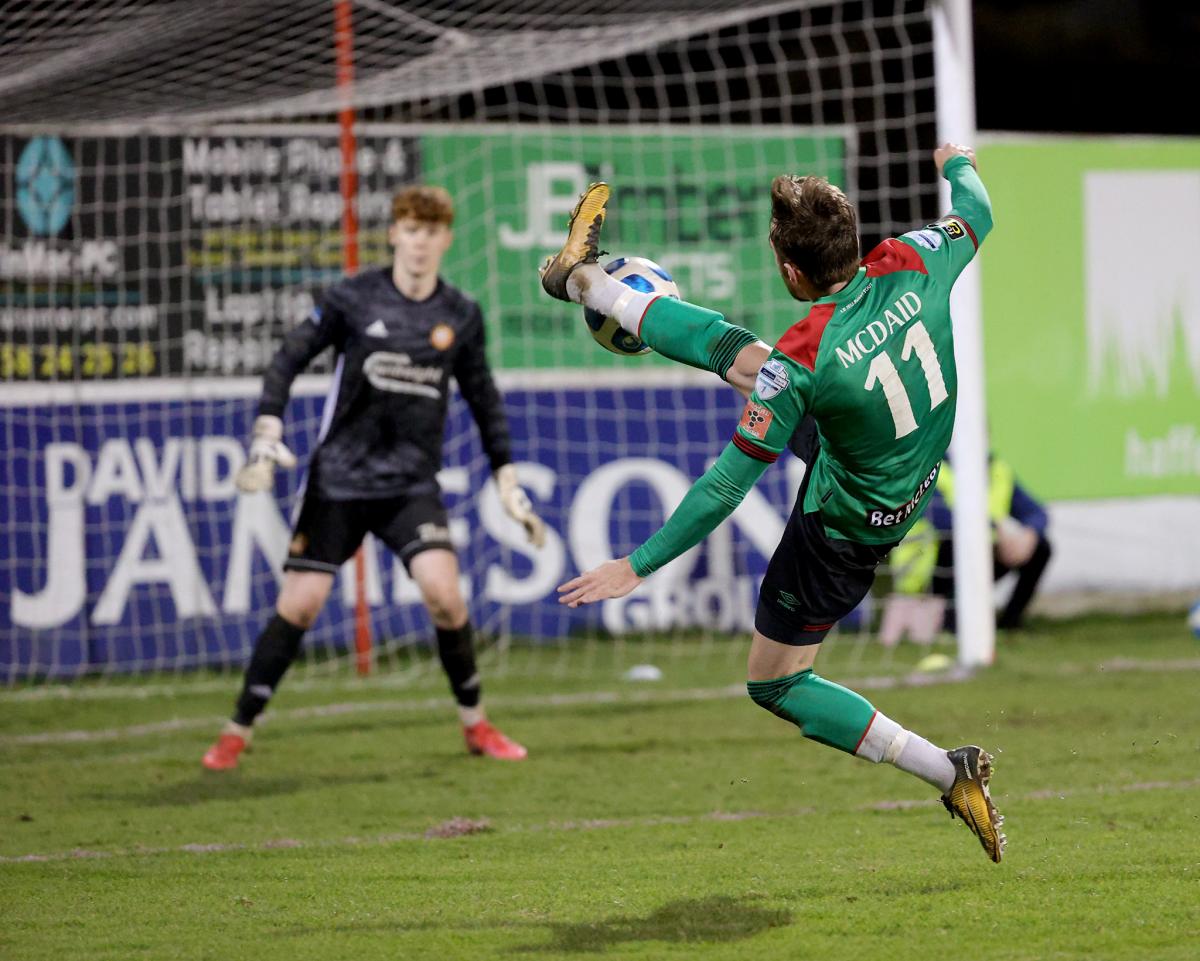 In the final minute Bigirimana went for goal again, this time stinging the hands of the young Ports keeper. Then in stoppage time skipper Kane fired just wide of the post before finally getting his head on a cross from O'Connor which the keeper saved comfortably. 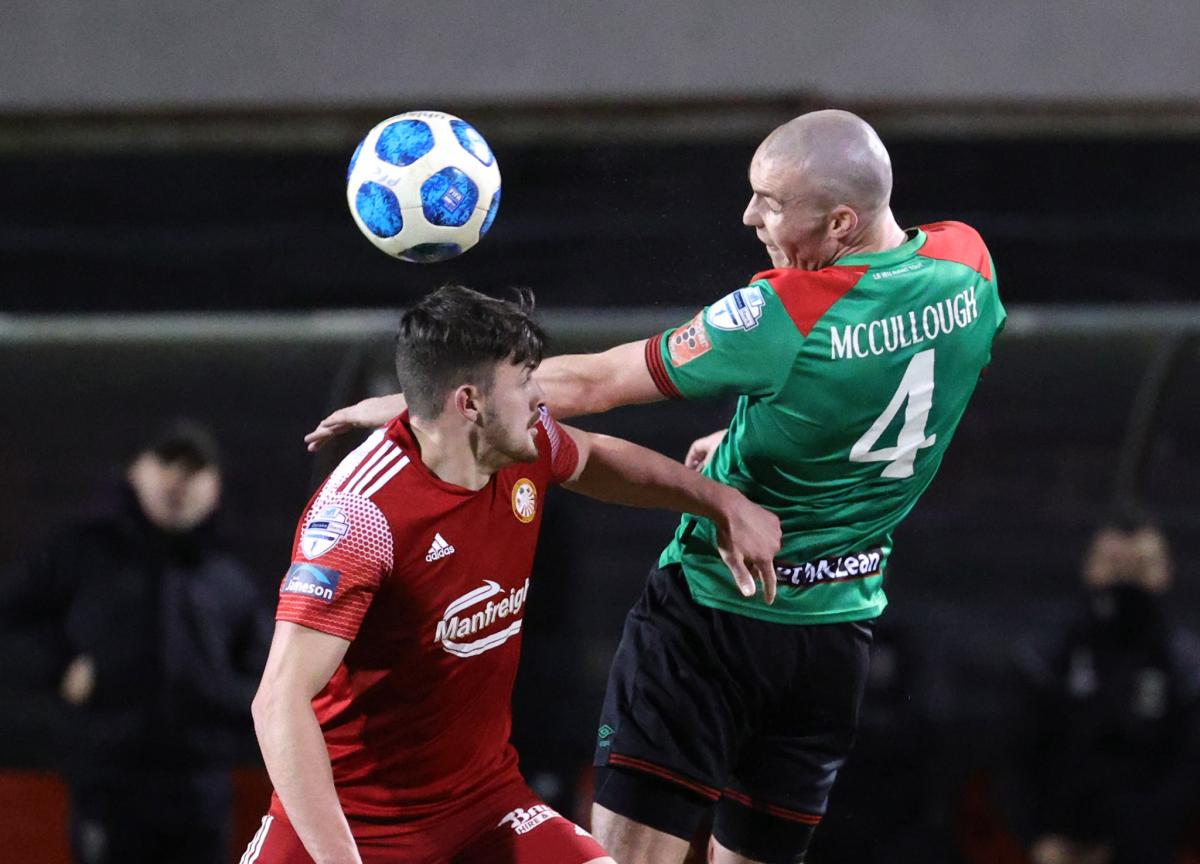 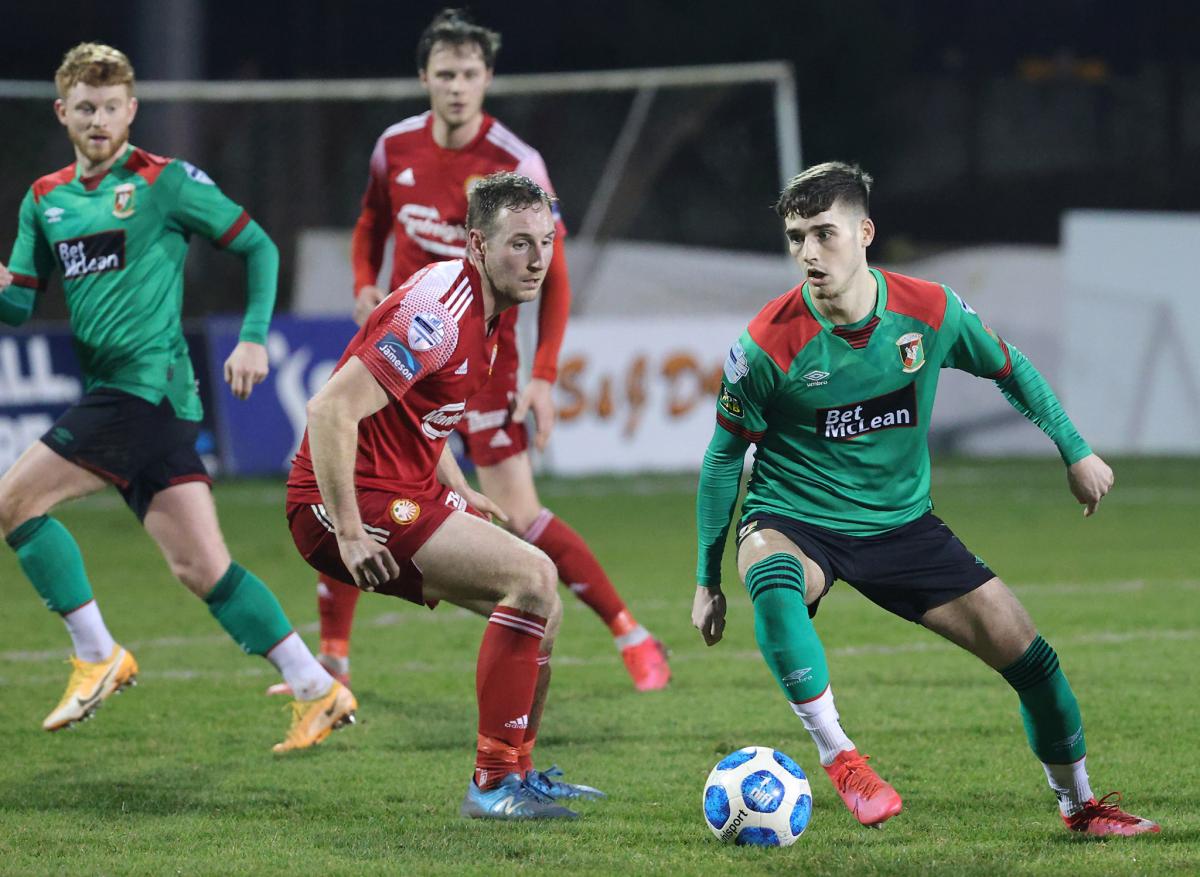