Tomorrow we head to Inver Park for the first time in twelve seasons to face Larne for the third time this season and the second time in four days.

Our last visit to Inver Park was in February 2008 when a Gary Hamilton hat trick secured a 3-0 win for Alan McDonald’s Glens. However, that was a very different Inver Park and a very different Larne FC from the ambitious, well resourced club, recently promoted from the Championship.

Our impressive extra time win on Tuesday night was preceded by a 2-1 home win last month goals from Paul O’Neill and Marcus Kane cancelled out an early opener from Jeff Hughes. We are currently two points and two league places ahead of tomorrow’s opponents so a third win on the bounce will clearly be the objective as we work to strengthen our current fifth place. 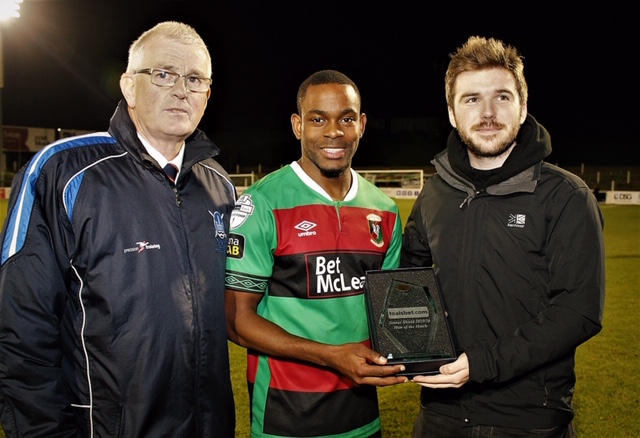 Mick McDermott: “I couldn’t have been happier with our outstanding performance against Larne in the County Antrim Shield on Tuesday night. They started very well, as I thought they would, but after the first fifteen or twenty minutes I thought we controlled the game. We had the better chances throughout but as with the past few weeks we missed more of them than I would have liked. But we deserved Darren’s winner. With the heavy fixture list we’ve had recently it was nice to bring on fresh legs to make the game safe. Darren had done very well up to that point and I thought Cameron led the line very well when he came on and give the Larne defence plenty of trouble when they wanted to push for a late equaliser. Elvio made a massive contribution when he came on with his goal and assist. People earlier in the season questioned some of our signings but the quality of the substitutions we’ve been able to make show clearly why we need a big, talented squad.

We never look far beyond the next game and we know Larne will have worked hard since Tuesday to regroup and prepare for this one. They’re a talented team who play good football and they’re probably at a similar stage of development as we are. I’m looking forward to the game as Larne are a talented, honest team and it should be another good one for the fans.

We have a full-strength squad available apart from a couple of longer-term injuries. Robbie McDaid wasn’t risked on Tuesday night after picking up a knock in training, while Gavin Peers should be okay after resting a minor injury for the Shield match. Paul O’Neill is back from international duty and available. He was at Tuesday night’s match but wasn’t long back in Northern Ireland after a few intense days, so we gave him a rest.

Parking and other information for travelling fans here