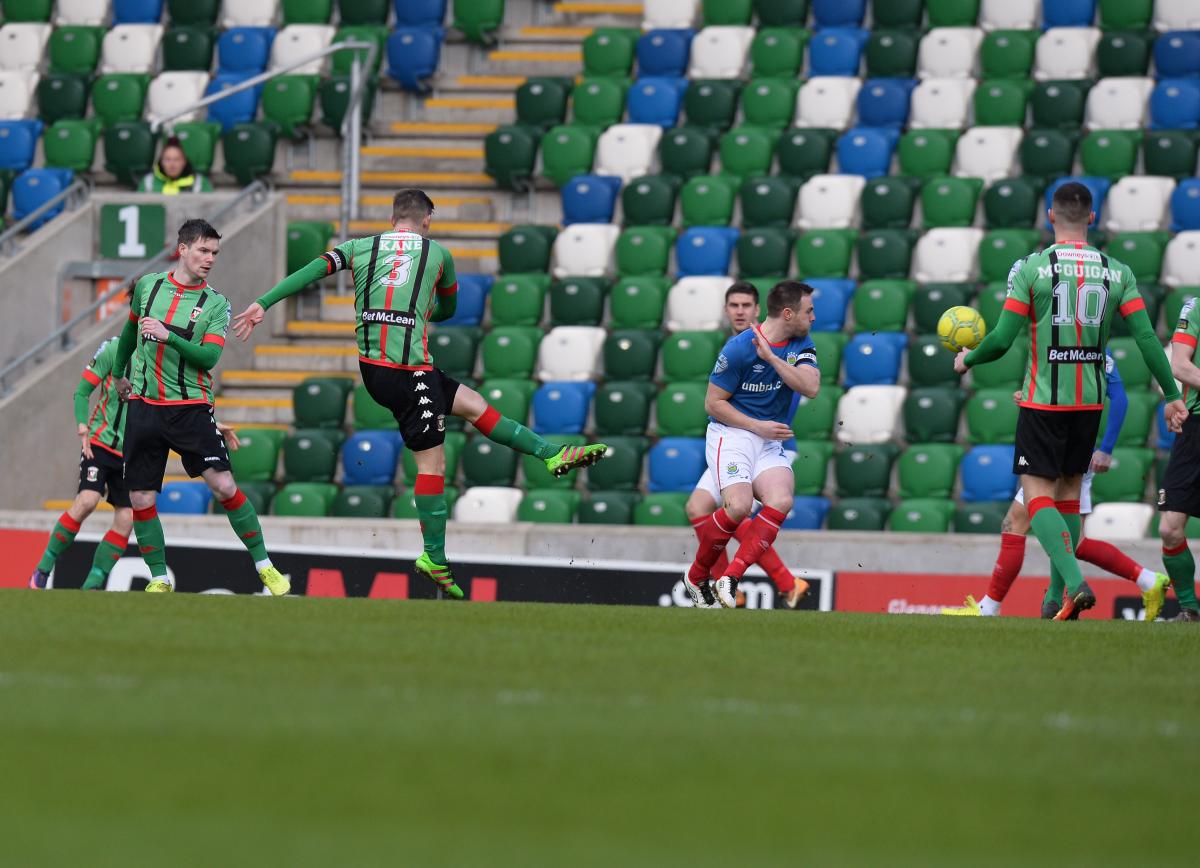 The Glens carried on where they left off last Tuesday night - in attack mode. In the opening minute a poor clearance by Jimmy Callacher fell to Steven Gordon and he tested Moore in the Linfield goal with a 25 yard drive. Moments later and the East Belfast side went in front. 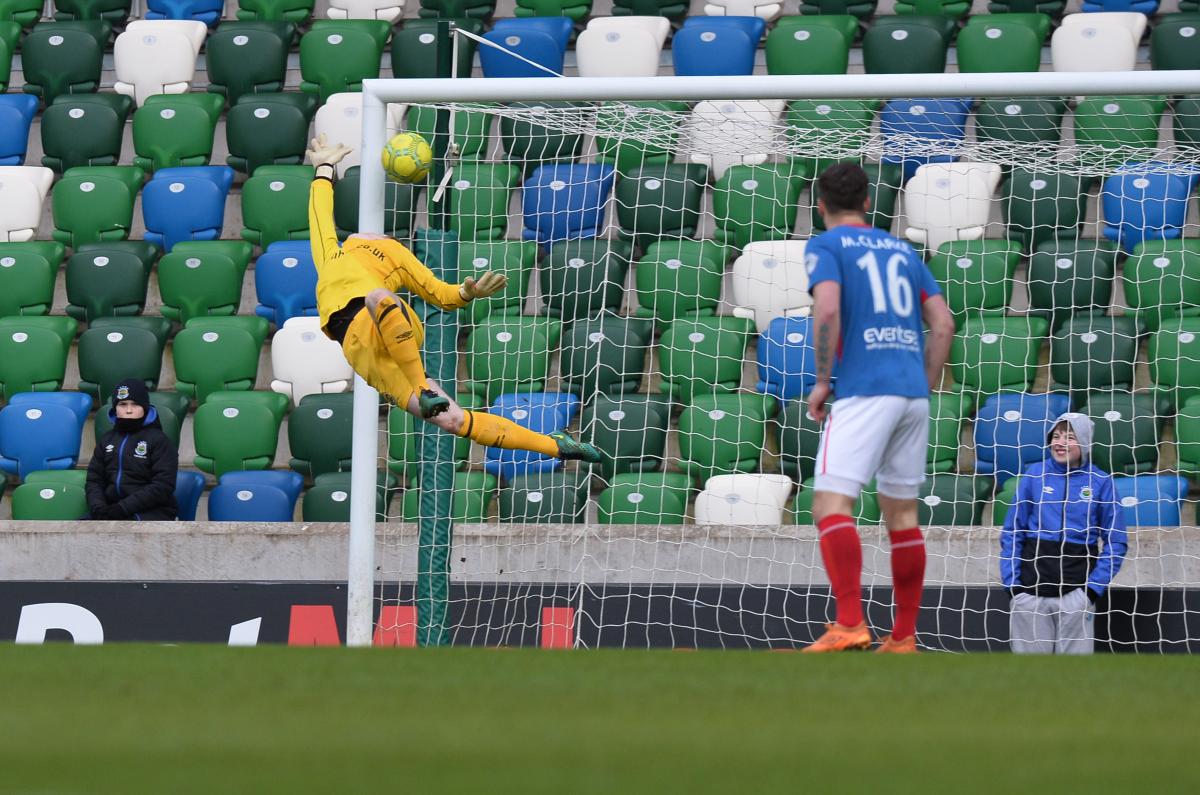 Jonny Addis fired in a cross from the right which seemed to be headed away from danger by Mark Haughey. Not so! Glentoran skipper Marcus Kane latched onto the ball and his stunning left foot strike found the top corner of the net to send the North Stand into raptures. Everyone remembers Kane's strike away a Carrick a couple of seasons back - this was even better! It almost got even better for the Glens on 9 minutes. John McGuigan drove towards the Linfield penalty area but was crudely hacked down 25 yards out. Curtis Allen took the free kick and was desperately unlucky to see his shot crash off the bar with Moore nowhere. 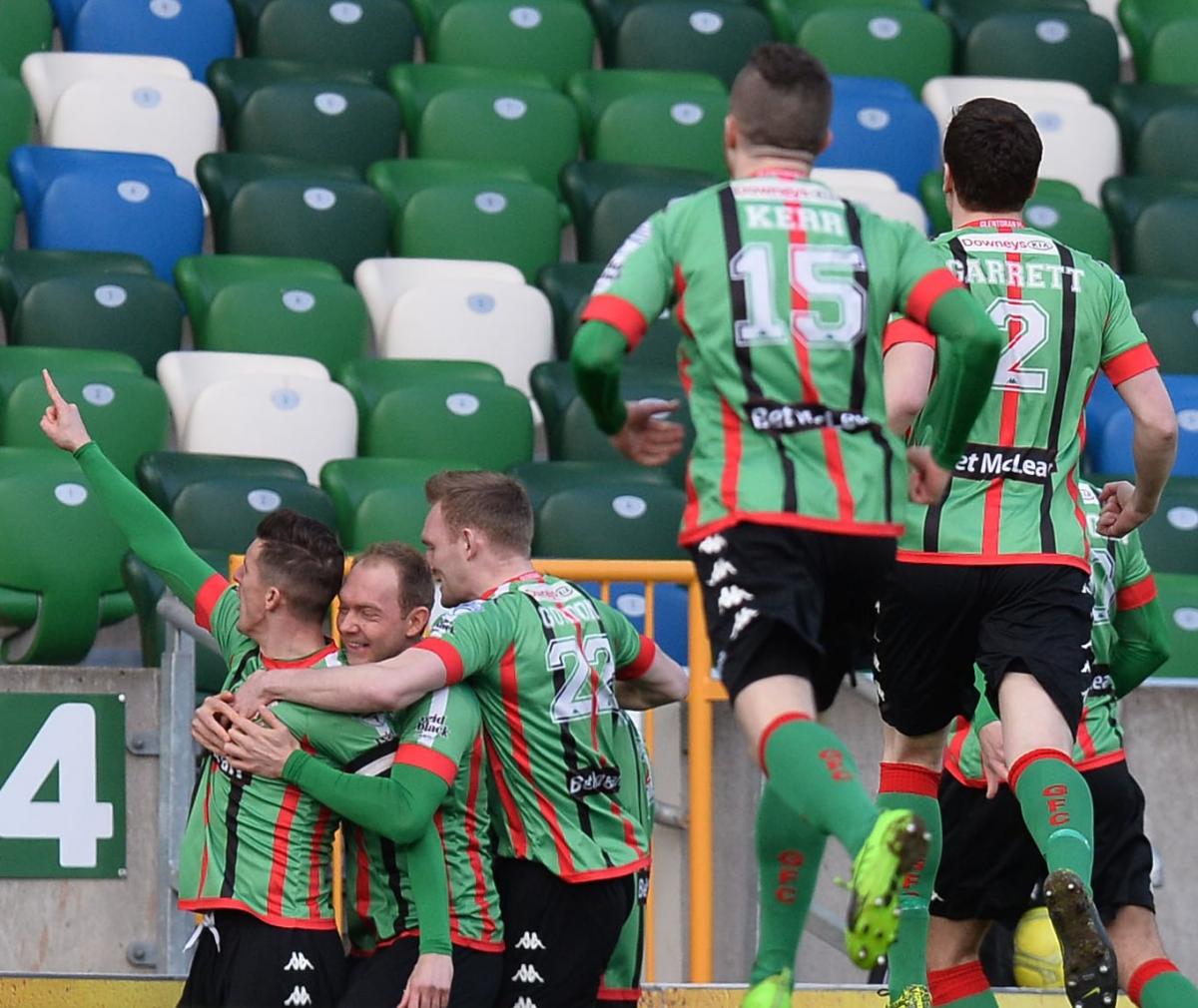 Mark Stafford had a chance to level things up on 13 minutes but his close range header was blocked by a Glens defender and then gathered by Elliott Morris. Andy Waterworth then tried his luck from around 20 yards but his weak shot was easily gathered by Morris making his 687th appearance for Glentoran. Midway through the half, with Glentoran on the attack, Marcus Kane appeared to be fouled close to the penalty area however referee Keith Kennedy ignored the visitors' claims for a free kick and the Blues broke forward. Kirk Millar crossed from the left but amazingly Kurtis Byrne failed to convert with a free header from only 5 yards out! On 27 minutes the home side had another chance from a corner but Nathan Kerr was on hand to clear Mark Haughey's effort. 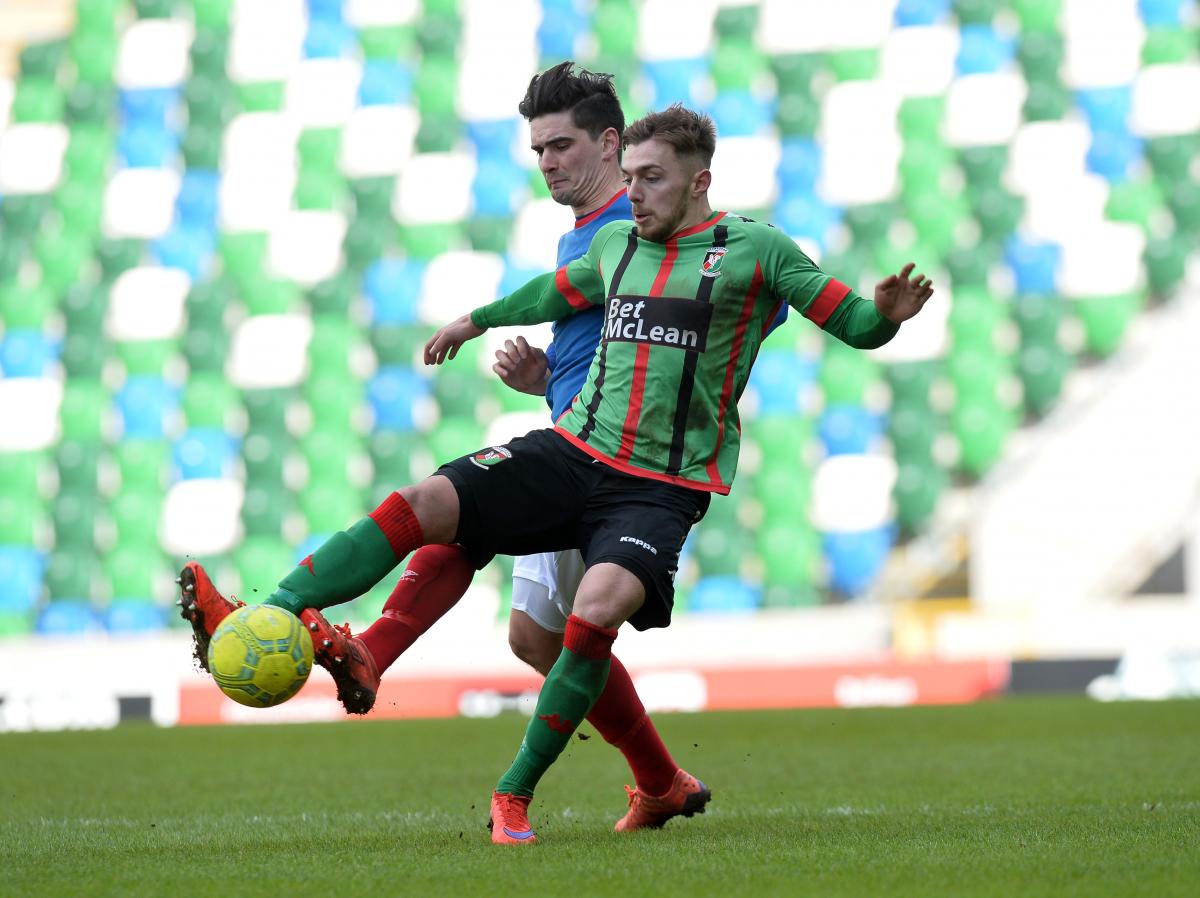 On 32 minutes the lively Robbie McDaid broke towards the Linfield goal but as he approached the area he was cynically taken out by Stafford, the Linfield defender picking up a deserved yellow card. Ross Redman took the free kick but it was scrambled clear. 10 minutes from the break John McGuigan tested Moore in the home goal with a 20 yard shot before Steven Gordon shot wide from the edge of the area. Just before the break Gordon picked up a booking following a late tackle. The Glentoran support weren't amused with referee Kennedy with Blues midfielder Robbie Garrett having committed two such challenges without action being taken! 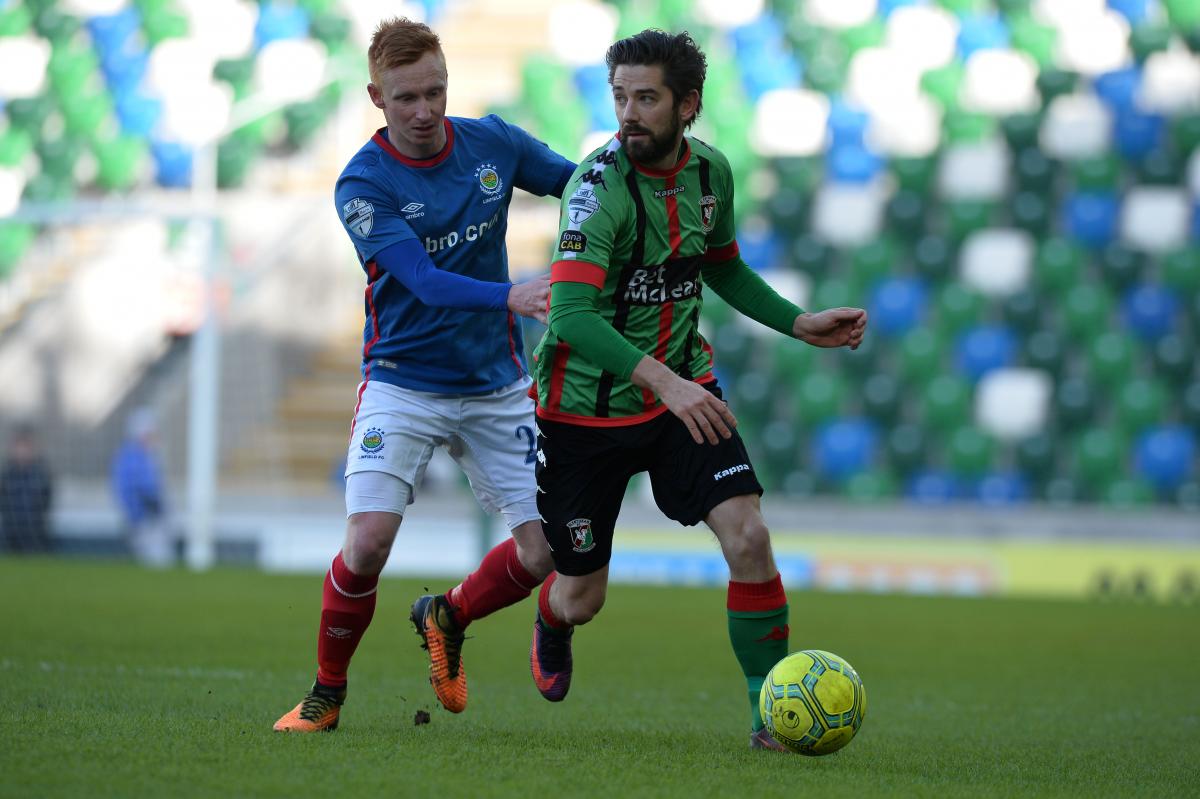 The Glens started the second half brightly and almost grabbed another quick goal. Peter McMahon played a great ball in to Curtis Allen but the Glentoran number 9 saw his shot flash inches wide of the post. Linfield almost levelled 4 minutes into the second period; Jimmy Callacher's header from a corner, hitting the top of the bar. On 52 minutes it was 1-all. A cross from the right by Kirk Millar wasn't dealt with and the ball sat up for Robert Garrett who headed home from close range. Kurtis Byrne sa his header go well wide whilst at the other end Marcus Kane was denied a second goal by a fine block. At this stage Linfield looked the more likely to edge in front but Glentoran manager, Ronnie McFall made a couple of changes in order to tighten things up. Indeed many of the Glens problems stemmed from some careless play, giving the ball away far too easily at times. 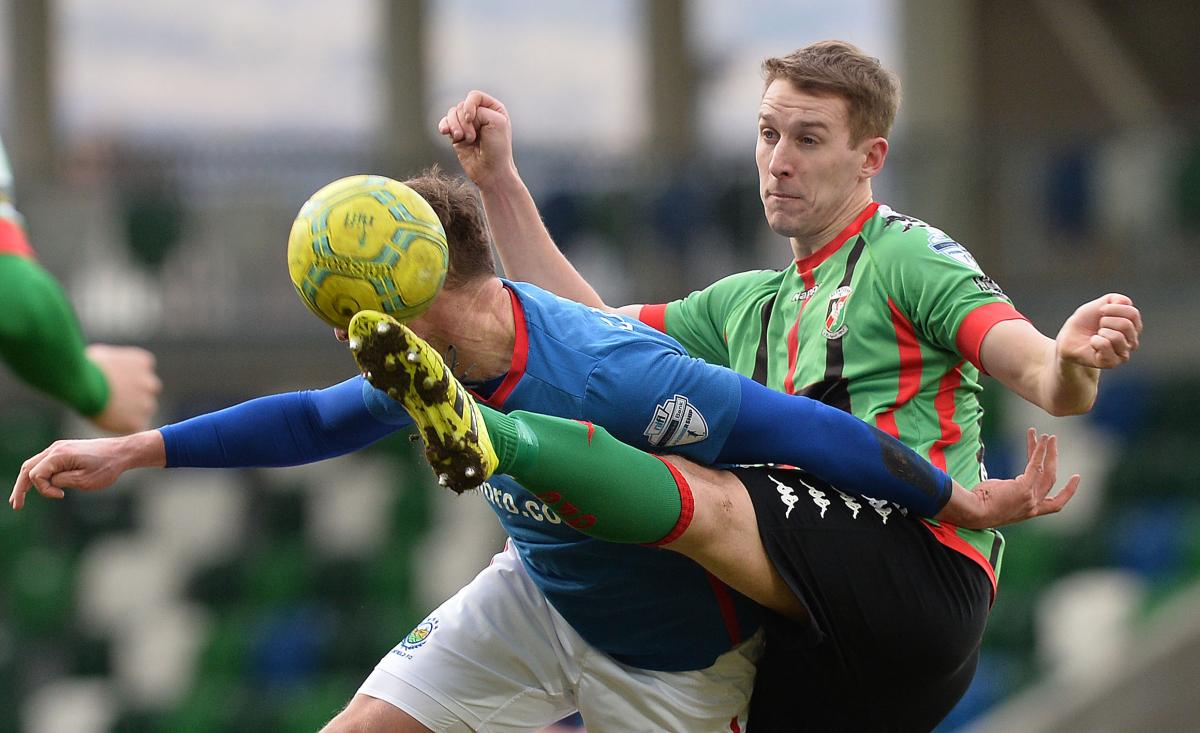 As the game entered the final 10 minutes Glentoran finally started to create more pressure on the Linfield goal. Dan Kelly found fellow substitute Dylan Davidson and the young midfielder's 25 yard drive brought a decent save out of Moore. Ross Redman was causing the Blues plenty of problems on the left, forcing a corner on 82 mins and then almost picking out Curtis Allen with a great free kick. Both teams had half chances during the 5 1/2 minutes of added time. A 30-yard effort from Robbie Garrett was well covered by Elliott Morris and just before the game ended, Curtis Allen's cross from the right just failed to pick out Dan Kelly in the area.

So Ronnie McFall's unbeaten run in the Danske Bank Premiership continues and his target of securing a top 6 finish was boosted with Warrenpoint Town securing a 3-1 win at Ballymena United. The Sky Blues travel to Solitude on Tuesday night before meeting the Glens at the Oval next Friday evening.