Jeff Stelling on the march in Belfast in 2019

Jeff’s March For Men challenge in aid of Prostate Cancer UK will bring him to Belfast on Friday September 6, with dates in Glasgow, Cardiff and London plotted either side of his trip across the Irish Sea as he aims to march through the £1m fundraising barrier as he travels to Glasgow, Belfast, Cardiff and London from 5-8 September, 2019. He will visit Belfast on

The long-serving Sky Sports television presenter has already completed 25 walking marathons for the leading men’s health charity in 2016 and 2017, raising close to £800,000, and

After boarding a flight from Glasgow at the end of the opening leg, Jeff will be marching to all four senior stadia in Belfast, starting at Seaview, up to Solitude, across the Lagan to join us in East Belfast then finally Windsor Park to finish his day. He urges the Belfast public to join him for at least part of his march in support of Prostate Cancer UK’s efforts to reduce the impact of this killer illness.

The exciting four-day event is part of Prostate Cancer UK’s wider walking programme, March for Men, which returns bigger and better in 2019 with 10 City Walks across the UK in June – including, for a first time, a family-friendly event at the Stormont Estate on 9 June.

Over 9,000 men in Northern Ireland are currently living with and after prostate cancer so this is clearly a major issue for our community. 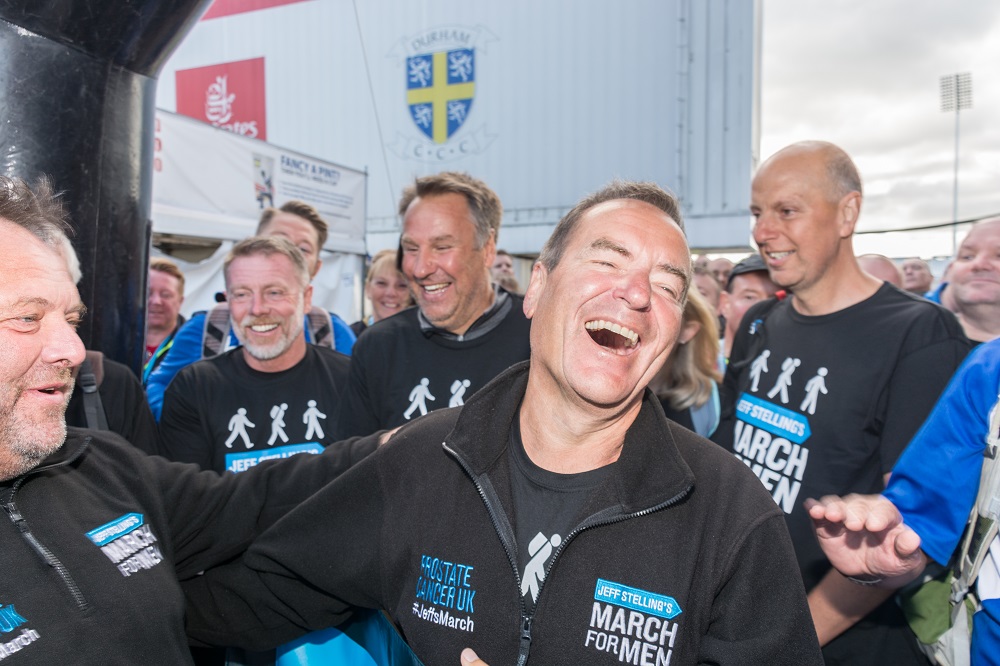 Jeff said on launching this year’s initiative: “It’s three years since I started this life-saving journey at the gates of my club, Hartlepool United, but there is still so much work to do,” said Jeff, who regularly wears the Prostate Cancer UK Man of Men pin badge on Soccer Saturday.

“Prostate cancer is the most common cancer in men, with one man dying every 45 minutes from this disease. That’s unacceptable, and that’s why I’m walking again.

“It’s an indiscriminate disease, affecting men and their loved ones across the UK. I’ve walked alongside many of them and am proud to call some friends. Their reaction and positive outlook despite being dealt the toughest of hands is simply unbelievable. I’m marching for them – and everyone affected – in a bid to fund the research to change the game.

“That’s why I’m taking our walk across into Northern Ireland and all four home nations and would love the public to join me en route. I live in England and work in London but the wonderful work of Prostate Cancer UK stretches into Scotland, Northern Ireland and Wales, so I will be pounding the pavements in four historic cities – and it wouldn’t be a football march without popping in on some iconic football clubs along the way.”

As ever, he wants company as he marches to a million, with walkers invited to join him across all four routes and help him reach his fundraising target. You can find out more via http://marchformen.org. 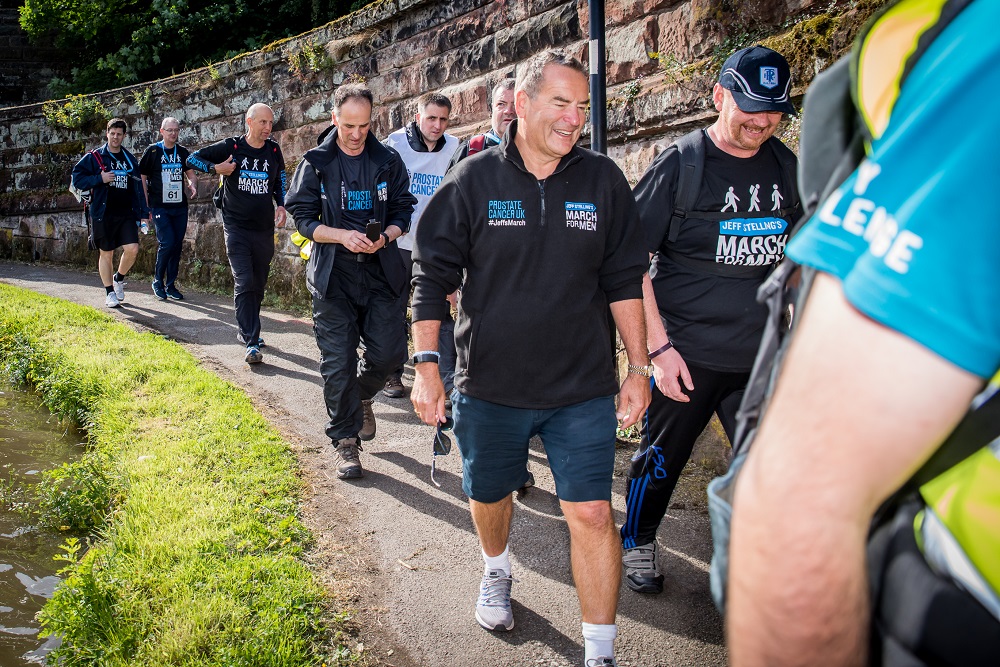 Now in its third year, Prostate Cancer UK’s March for Men series has grown bigger with ten organised walks including returns to Bristol, Glasgow, Leeds, Liverpool, London, Manchester and Nottingham and new walks in Belfast, Birmingham and Cardiff.  The family-friendly ambles are held over circa 2km, 5km and 10km and supporters are also encouraged to organise their own walks.

Prostate Cancer UK Chief Executive Angela Culhane, who has walked more than 130 miles alongside Stelling across the 2016 and 2017 March for Men events, said: “We’re thrilled that Jeff’s amazing journey will continue this year and are incredibly excited he will be spearheading our drive to raise awareness and funds for vital research across the four nations.

By visiting Glasgow, Belfast, Cardiff and London and walking to some of the country’s iconic stadia alongside fans and people affected by prostate cancer, Jeff’s epic challenge will extend our footprint in football, and prove again the power that sport can have in breaking down barriers and shaping tangible change.

“The fight against prostate cancer, a disease that kills one man every 45 minutes, is a purpose worth uniting for, and we want to continue making strides to combat this disease. That’s why we’re so grateful to Jeff for dusting off his walking boots and plotting another ‘unbelievable’ adventure. Our March for Men walking programme is bigger and better than ever this year with 10 city marches in June, Jeff’s amazing four-day adventure and supporters continuing to organise their own walks, and we are urging people to get involved.

“We are constantly inspired by the incredible men, women and children who come out to support us, each with their own story and personal challenges to conquer. We will be proud to walk side by side with them and together we can add to the real momentum building in the fight against this disease. The vital next step is to fund more ground-breaking research and find the tools needed for a screening programme, in order to catch more prostate cancers early and save more lives.”

Many people are unaware that prostate cancer is the most common cancer in men. It’s a huge issue that cannot be ignored. One man will die from prostate cancer every 45 minutes in the UK. That’s over 11,500 men a year.

To sign up and join Jeff or to find out more information about the March for Men programme go to http://marchformen.org.