David Scullion's 90th-minute winner sent Glentoran through to an Irish Cup quarter-final tie with Glenavon following Saturday's Sixth Round replay with Armagh City at the Oval.

After Armagh's impressive performance in the original game, in which some may argue that the Championship Two side were unlucky not to progress at the Glens' expense, the returning Eddie Patterson will have been under no illusions of the capability of his Holm Park opponents. Nonetheless, the early exchanges belonged to the home side as Aaron Boyd and Curtis Allen looked to tantalise the City defence - the latter firing the first shot of the game straight into Armagh keeper Sean Morgan's grateful gloves after 12 minutes.

It was clear to see that the away team had been sent out to get in the faces of their Premiership opponents as they racked up the foul count early on, but Glentoran continued to pile the pressure on the City End goal with Allen again coming close on 24 minutes with a header sailing straight into Morgan's hands when he really should've done better and four minutes later Philip Donnelly sliced an effort well wide to remind the Glens that they needed to take their chances. Scullion and Boyd were combining well for the east Belfast outfit though and with five minutes to go to the interval Boyd rifled a thunderous drive goalwards only to see Morgan palm it onto the crossbar.

However with just a minute of normal time remaining Glentoran's number 10 ran towards goal, skilfully cut inside the box and was scythed down - the referee having no hesitation in pointing to the spot. In the previous Irish Cup games the Glens have been awarded penalties but Allen, who hit both of them, could convert neither. This time though the pressure was placed on Jay Magee's shoulders - the big centre back having never missed a competitive penalty in the famous red, green and black strip. Magee confidently blasted his spot-kick straight down the middle just as the half-time whistle was on the blow. 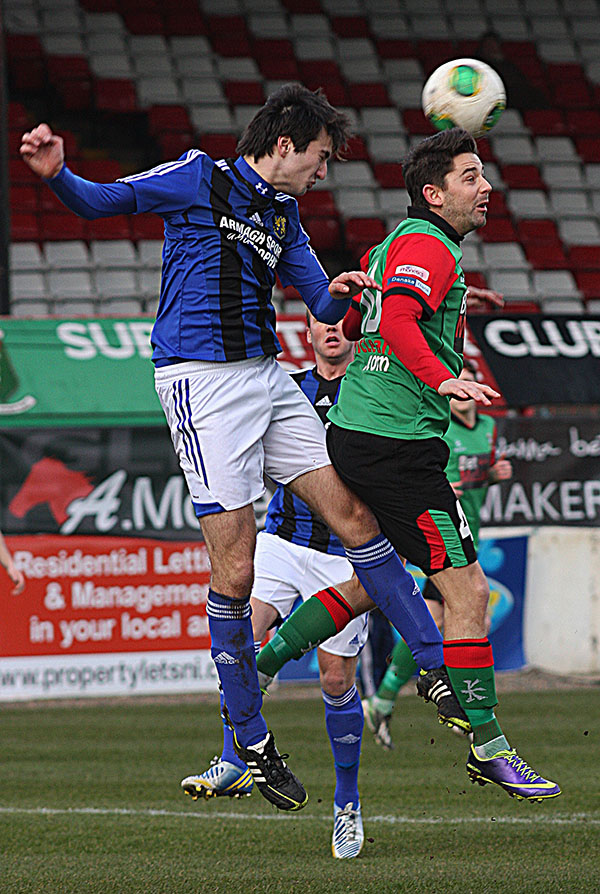 The second half began much as the first had ended with the Irish Cup holders on the attack. On 48 minutes Morgan handled outside of the box and received a yellow card, though Allen blazed his free-kick inches over the upright. Three minutes later and the striker had the ball in the net - but his cool header was correctly ruled out for offside. The former Inverness Caledonian Thistle striker was made to rue that miss though, because Armagh sensed that their chance had come and the exceptional Stephen Murray smashed a volley just over from close range on 67 minutes, before the big number 9 equalised with ten minutes left on the clock as a blistering counter attack saw him cooly slot underneath the onrushing Morris.

A frantic final few minutes was thrown up with both teams desperately attempting to reach the last eight of the competition. On 87 minutes Donnelly's snapshot forced a brilliant low stop from Elliott Morris and with Murray closing in on an empty net, Calum Birney made a vital clearance to prevent a certain goal. As the clock ticked ever closer to 90 Stephen McAlorum nearly scored the goal of the season. The former Donegal Celtic dynamo, who has never scored for the Glens, controlled the ball 25-yards out, flicked it up and lobbed Morgan with his left foot. As the entire ground went silent, willing the ball to drop just below the woodwork, it slammed the crossbar to everyone's disbelief.

Extra time seemed inevitable, but as the injury time board went up the holders won it courtesy of the excellent Scullion. Substitute Jim O'Hanlon's cross found Curtis Allen who was forced wide but the forward laid it off to Willie Garrett and his dipping ball to the near post was turned home by the winger to spark intense relief and celebrations among all connected with Glentoran. 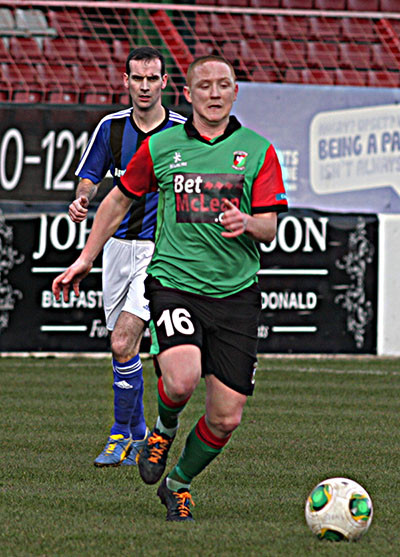 The home side held on for the three minutes of injury time to win their first game since 14th January and progressed to the quarter finals where they will meet Glenavon on Monday 10th March at the Oval (7:45pm kick-off) and the victors of that will play Crusaders in the semi-final, with the other last-four game being Queen's University Belfast vs Ballymena United. Glentoran's next game is a Danske Bank Premiership tie against Ballymena at the Oval this Friday (7th March) night with a 7:45pm kick-off.