Debutant Glentoran manager Gary Haveron and his side can count themselves unlucky not to have taken at least a point against old rivals Linfield at the Oval this afternoon.  For the second Saturday in a row it was a game of two halves for the Glens as they came storming back from a goal down at half time to take the game to Linfield.  Haveron made three changes to last week’s line up at Ballymena, bringing in Calum Birney, Marcus Kane and Ciaran Caldwell in place of Tiarnan McAuley, Ross Redman and Jonny Smith and pushing Steven Gordon up to support Curtis Allen in attack. 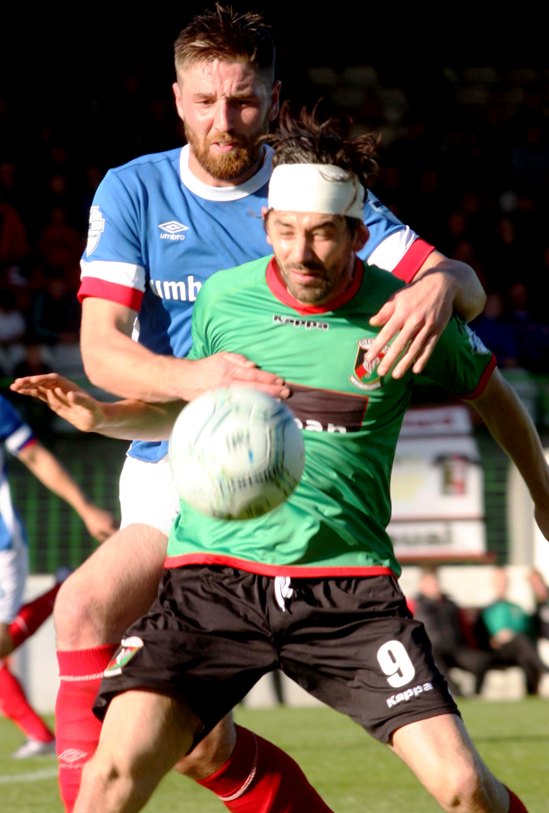 The game started in a niggly fashion with Paul Smyth going in late on Elliott Morris in the opening seconds and referee Arnold Hunter having to sort out a bout of pushing and shoving as the players lined up for a Linfield corner after just five minutes.  When it was eventually taken by Kirk Millar the ball was cleared back out to him and as he drove it low back across the six yard box it came off Marcus Kane right on the line for an own goal.  The Glens had started sluggishly and looked off the pace from the start and this setback seemed to add a dose of nerves to the mix.  Linfield were dominating possession, despite creating few chances of note, and the pressure was starting to build.  However it was the Glens who had a chance of an equaliser on 17 minutes when Chris Lavery forced a bad mistake in the visitors’ defence, the ball falling to Gordon on the edge of the box in acres of space but he delayed his shot too long, allowing a defender to block. 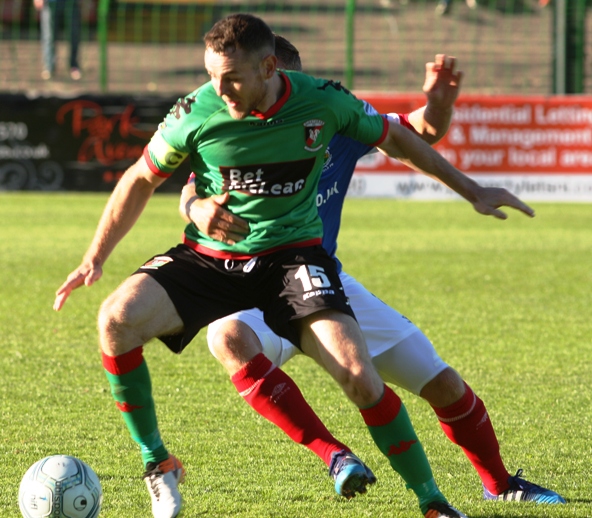 Chances then started to come for the Blues with Aaron Burns heading narrowly over, Sammy Clingan’s long range effort beaten away for a corner by Elliott Morris and Mark Stafford again heading over from a Clingan free kick.  The Glens had no penetration going forward save for a couple of Eric Foley efforts that were easily dealt with by Roy Carroll in the Linfield goal.  Most in the home end would have settled for going in just a goal down at the break but Linfield almost doubled their lead on 40 minutes as Millar turned on the edge of the box but his shot was pulled just wide. 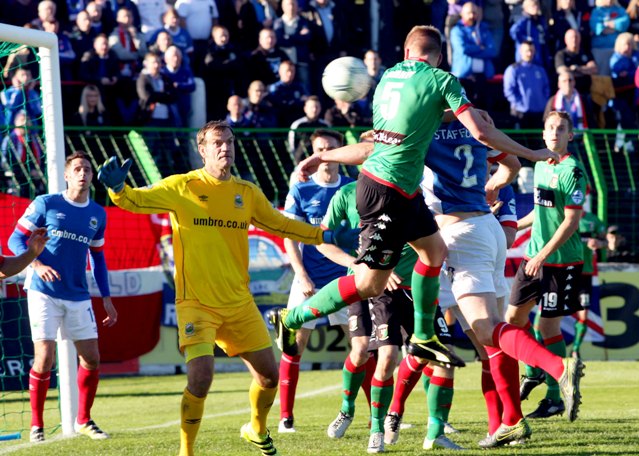 Whatever was in Gary Haveron’s first half time team talk must have had the desired effect as the Glens came out for the second half a rejuvenated side.  They seemed to have suddenly found an extra gear, pushing forward at every opportunity and finding plenty of space in midfield.  On 53 minutes James Ferrin came close to his first Glentoran goal forcing Carroll to save after being played in by captain for the day Aaron Harmon, although the officials inexplicably awarded a goal kick.  However it wasn’t long before the Glens grabbed their equaliser.  Chris Lavery’s superbly driven corner was headed goalwards by Jonny Addis and, although it may have been going in anyway, Curtis Allen was on hand to make sure and poke it over the line from a matter of inches. 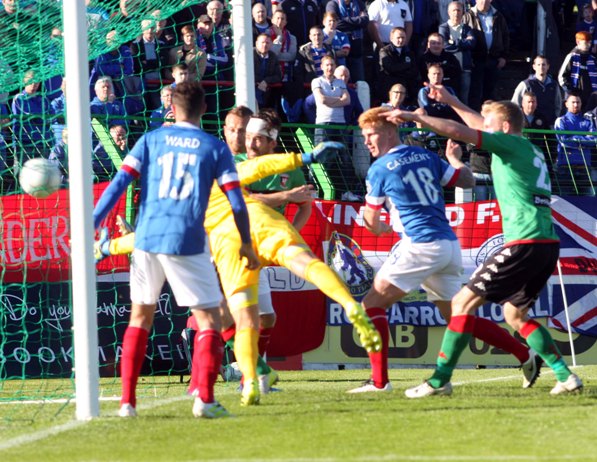 The Glens didn’t rest on their laurels but went in search of a second with a Jonny Addis long throw causing panic in the Linfield defence just a couple of minutes later.  Gordon also had a good chance when set free by Ciaran Caldwell but elected to try a lob when a direct shot may have been the better option.  He was also involved in a moment of controversy when challenging Carroll quite legitimately in trying to get on the end of an Allen cross.  The Linfield ‘keeper took exception to the challenge and swung out at him, but referee Hunter took the easy option and awarded a free kick to the defending side.  Allen then shot just over after a neat lay off from Caldwell and with ten minutes left Calum Birney headed agonisingly wide of the post after another well placed Lavery corner. 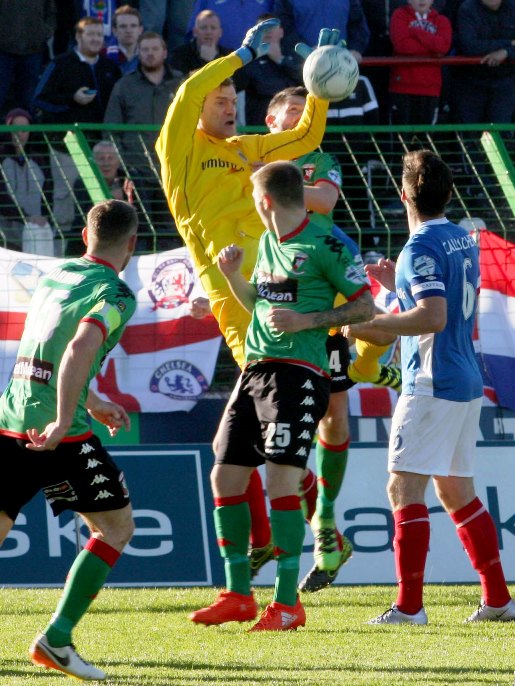 As the final whistle approached it was the Glens that looked the likely winners but with just three minutes of the ninety left Linfield won a corner which Millar swung in from the left and Jimmy Callacher was left free to head powerfully past Morris.  It was a desperately disappointing goal to give away and undeserved after all the efforts of the second half.  There was to be a further set back in stoppage time as Birney let his frustration get the better of him as he put in a scything challenge on substitute Niall Quinn and could have no complaints as the referee produced the red card. 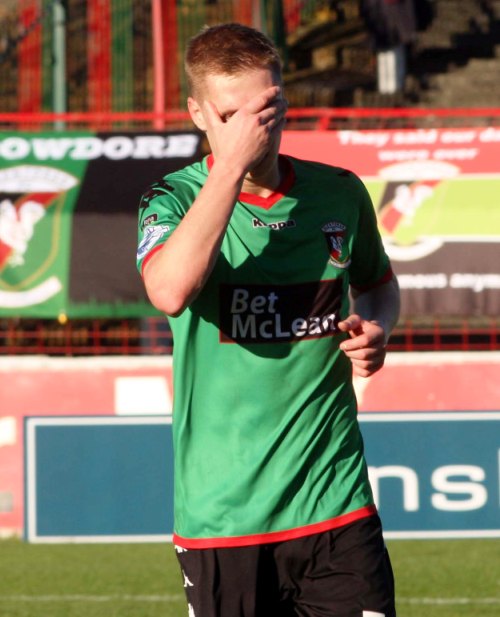 So a disappointing end to the game but new manager Haveron can take plenty of positives from it after an excellent second half performance.  With the side having produced a similar display in the first half at Ballymena last week sustaining this for ninety minutes could see us climb the table, starting with a home game against Ballinamallard United next week. 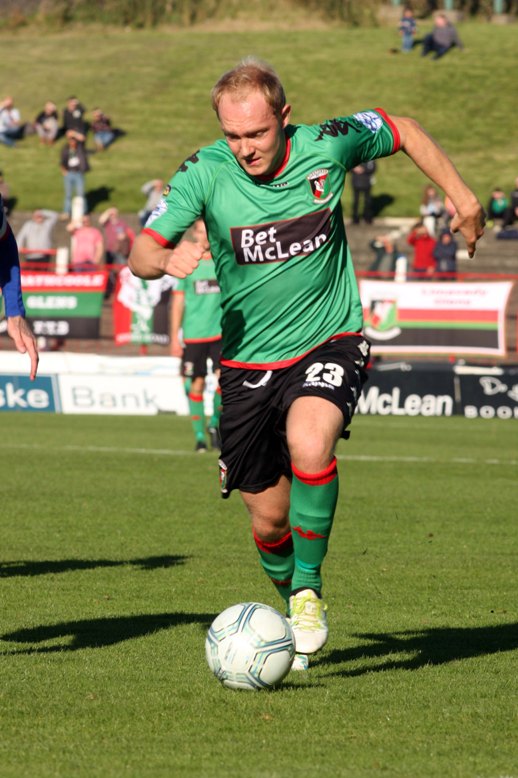