Glentoran ensured that October's league record remained without defeat after they withstood a Cliftonville onslaught in the final minutes following a fiery game that saw several bizzare refereeing decisions.

In September, the Glens faced up to their title-holding opponents on two occasions; conceding seven and replying just once in return. However, a vast, vast improvement in east Belfast has ensued since that shocking Solitude showing and Eddie Patterson's side were looking to complete their fourth successive league victory. The rain poured down as the spectators filtered in and an unchanged Glentoran side from last week's impressive victory in Coleraine was read out over the tannoy, though Jay Magee and Stephen McAlorum returning to the home dugout was a welcome sight for all connected with the Oval club.

The match began at a frenetic pace, with both sides having decent early chances to open the scoring. Firstly, after 3 minutes, Elliott Morris was caught in no-mans-land and would've been relieved to see Mark Clarke's header sail safely over his own crossbar. Then, minutes later, Jim O'Hanlon blistered brilliantly past former Glenman Jaimie McGovern only to be hacked synically down inches outside of the box with Jordan Stewart begging for a tap in across the six yard line. Whilst the arguments will continue as to whether McGovern's challenge was inside or outside the area, the fact that he received no punishment baffled everyone in the ground! After a stoppage in play as Elliott Morris, Jimmy Callacher and a Glentoran ballboy all collectively fixed a hole in the home net, the away fans were furious following Jimmy Callacher's challenge on Joe Gormley inside the box saw nothing more than a goal-kick given. Gormley though made no appeal to the officials.

The blood began to boil and both sets of players were soon flying recklessly into challenges as Mark Miskimmin, Ronan Scannell and Mark Clarke were all booked within a ten minute spell. In that scrappy period of play neither team managed to forge an opening, however on 32 minutes Marcus Kane will have been disappointed not to have done better with his header when well-placed, and Callacher's effort suffered a similar fate a minute later as the Glens pressed for that precious opener. Indeed, their efforts were duly rewarded as two minutes into first-half stoppage time Kane's deflected cross fell favourably to the waiting Miskimmin to tap in for his fourth league goal this campaign. 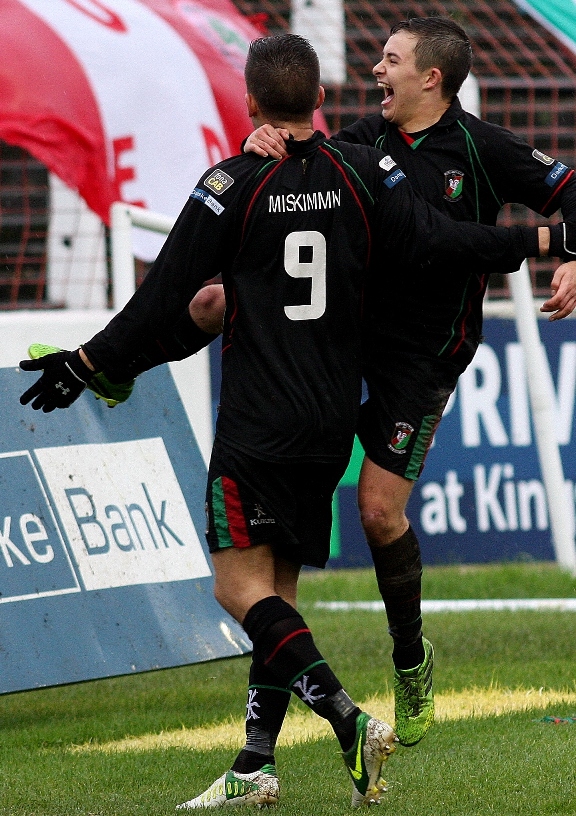 After a delayed start to the second half because of more repairs to the Sydenham end goal, McAlorum made his return to the red, green and black strip after a spell on the sidelines to rack up his 50th appearance for the east Belfast outfit since joining last summer. However, just seven minutes after crossing the white line, referee Mervyn Smyth baffled all around him by sending the former Donegal Celtic dynamo off! It seemed to be a genuinely jaw-dropping decision, as at the time neither set of players seemed to appeal for a dismissal, and it must be said that arguably worse challenges had been committed earlier in the game. Although McAlorum appeared to raise his studs slightly as he went in for the 50-50 with Chris Curran, a red card still seemed rather harsh. 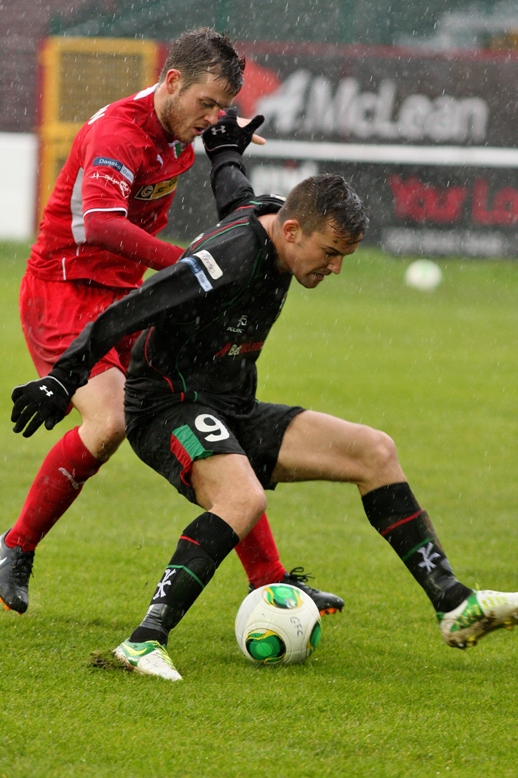 The temperature on the pitch began to rise as both players refused to back down, and on 66 minutes Richard Clarke, making his 200th appearance for the Glens, released O'Hanlon after a swift counter-attack, however the winger failed to trouble Ryan Brown in the Reds' goal. Then, just 8 minutes later, the referee stunned everyone again with, what the home side considered, a dreadful decision. From a Cliftonville clearance, Callacher rose higher than Ciaran Caldwell and headed the ball down to Clarke. However, Smyth decided that the minimal contact on the Reds' midfielder was far too boisterous and amazingly awarded a penalty to the away side! Justice seemed to be done after Morris guessed correctly and beat away George McMullan's tame strike from twelve yards, however 20 seconds later Caldwell volleyed home from inside the Glentoran area; the home side failing to clear their lines following the spot-kick. As the final whistle drew ever closer, Ryan Catney and Curran both had chances to snatch it for the Reds whilst Jordan Stewart, Mark Miskimmin and Jimmy Callacher could've claimed all three points for east Belfast however none managed to convert. The supporters enthusiastically roared the Glens off the pitch though, and on another day it might've been a much different story. Next weekend we travel to Ballymena United looking to start November in similar fashion to October, hope to see you all there. 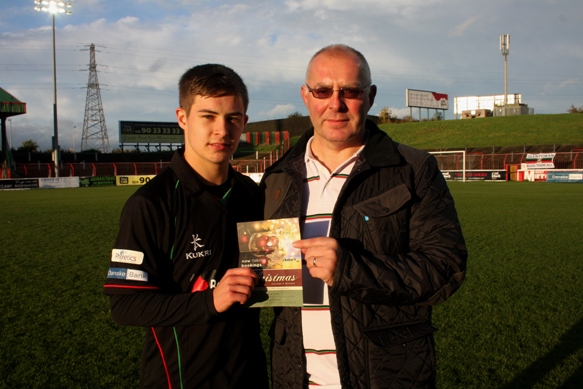