First half goals from Richard Clarke and David Howland secured the points for Glentoran at the Oval on Saturday.

The opening half hour of this game saw the Glens produce probably their best football of the season and in that time should have been in front by more than the two goals they’d scored. As early as the 3rd minute, Andy Waterworth was clean through on goal but dragged his shot wide of the post. On 6 minutes the first goal arrived. Jason Hill broke down the left flank and did really well to pick out David Howland in the penalty area. Howland found Richard Clarke and his left foot shot beat Alvin Rouse, creeping just inside the post. Mallard’s captain, Mark Stafford picked up a yellow card on 14 minutes and Stephen Carson’s free kick was headed just wide by Jay Magee. Moments later Waterworth broke clear again but this effort was deflected into the side netting. The Glens continued to press and were rewarded with a second goal on 17 minutes. Mark Clarke’s cross to the back post was headed back across goal by Colin Nixon where 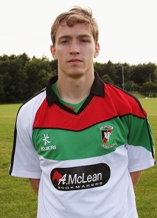 David Howland got a touch to beat Rouse from close range. Jimmy Callacher (19) went close with a long range shot and then Waterworth (26) was unlucky to see his shot deflected for a corner. Ballinamallard United pulled a goal back on 32 minutes; the ball falling to James McKenna from a corner kick and he beat Elliott Morris from 8 yards. On 41 minutes a superb pass from Magee sent Hill clear on the left. He found Carson but his cross was grabbed by Rouse at the back post. David Kee had a chance from a well worked corner on 43 minutes but Elliott Morris tipped his 25 yard drive over the bar. From the corner Kee had another opportunity but this attempt was easily held by Morris. In first half stoppage time Andy Waterworth rounded the keeper and was unlucky to see his shot cleared off the line.

The second half saw Ballinamallard produce a spirited fight back and on 51 minutes Elliott Morris did well to save an effort from Jason McCartney at the second attempt. Morris made an outstanding save on 54 minutes to preserve Glentoran’s lead. Chris Curran picked out Andy Crawford in the area and the big striker looked certain to level things up but for the excellence of Morris. There were half chances for Callacher (57) and Waterworth (59) but both failed to test the keeper. McKenna got his head on a free kick on 64 minutes but it went straight at Morris. Morris denied Stafford (81) as the Mallards continued their search for an equaliser but Jimmy Callacher almost made the game safe on 82 minutes; his 25 yard free kick going inches wide of the post. It was a nail biting end to the game for the home fans as Ballinamallard forced a couple of corners during the 5 added minutes but the Glens defence held firm to secure all 3 points and move within a point of both Ballinamallard United and Coleraine. 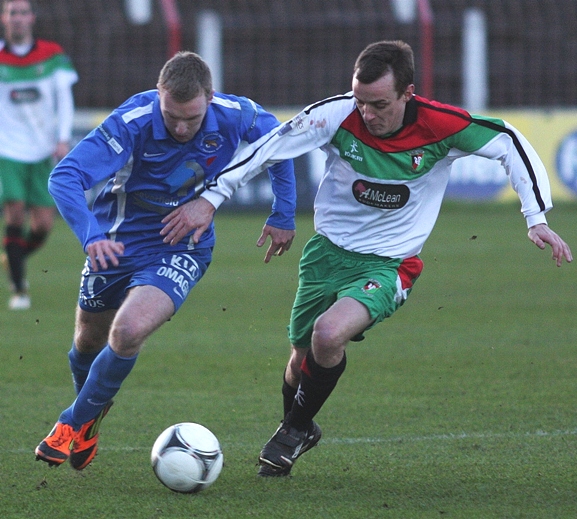