Glens up to 4th after Glenavon win

Glentoran have climbed above Coleraine to 4th in the Danske Bank Premiership following a 2-1 win against Glenavon at The Oval. Glentoran's performance was never particularly convincing and never comfortable but nevertheless the ability to win whilst not at our best is a quality most teams strive to have.

Glentoran started the game with two holding midfielders in Mark Clarke and Jimmy Callacher and seemed to lack width in the forward line. The game started slowly with neither side being able to control possession. Colin Nixon had the first chance of the game on 17th minute when he broke into the box and got on the end of an Andy Waterworth cross only to blaze over. Shortly after Callacher went close from an overhead kick but Glentoran mostly seemed unable to create enough chances. Glenavon started to grow in the game and Elliott Morris was forced to deal with a number of threatening corners. Following Glentoran's failure to clear the ball from our area, Sean Ward was forced into a header clear off the line.

The biggest moment of the first half however came on the 28th minute when a penalty was awarded much to the shock of The Oval. Glenavon had swung a corner deep into Elliott Morris' 6 yard box where the ball was cleared. It was then to the majority of fan's great surprise that the referee pointed to the spot for some form of contact in the area. It was difficult to see anything from the stands that justified the decision and the bemused look on the Glentoran player's faces told of their opinion on the decision. Perhaps justice was done though as Elliott Morris dived to his right and kept Guy Bates' penalty out. 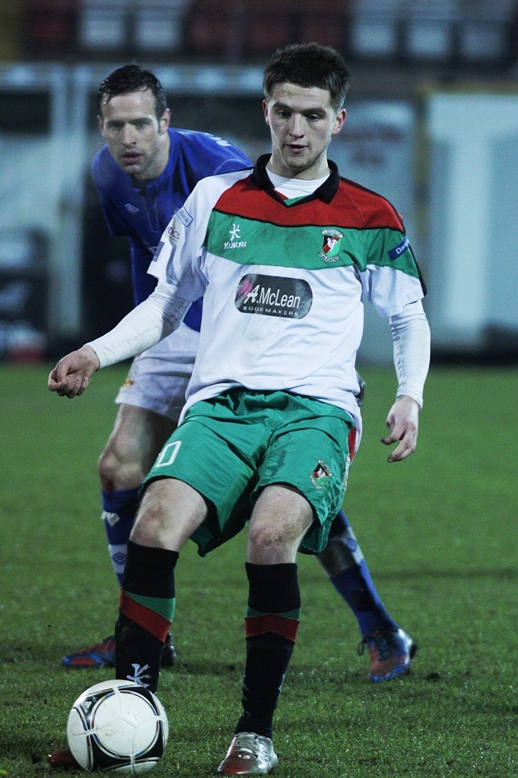 At half time Glentoran introduced more width through Jim O'Hanlon in place of Jimmy Callacher. Glentoran seemed to settle more into the game and Stephen McAlorum saw his flick across the 6 yard box creep wide. It was Glenavon again who were being the more threatening however as Elliott Morris misjudged the flight of a cross on 62mins only for the free header to go over the bar. Again, former Glentoran player Ciaran Martyn escaped the offside trap only for Morris to tip superbly wide.

It was a game that seemed whatever direction the first goal would go would prove decisive and that was the case on 71 mins when Andy Waterworth got the breakthrough. After some excellent work from Stephen Carson who cut in from the wing before lobbing an excellent ball through the defence, Waterworth maintained his composure and fired home to send Glentoran into the lead. The game was killed off as a contest not long after as Stephen Carson curled in a beautiful free 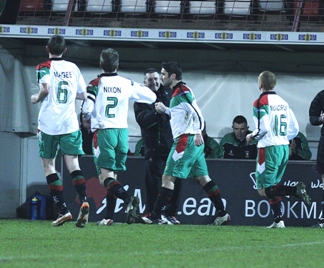 kick from 25 yards which went in off the post.

Glentoran could have made it 3 when McAlorum fed Waterworth with an excellent pass but Waterworth's shot was well stopped. Jim O'Hanlon also could have made it 3 but was stopped by the keeper as well. It seemed Glentoran were coasting to 3 points when Gary Hamilton broke clear in stoppage time and squared for Ciaran Martyn to make it 2-1. This caused a nervy last couple of minutes but Glentoran saw it through and climb to 4th in the Danske Bank Premiership table.