Glentoran's U12 team paraded the Foyle Cup at the Oval yesterday ahead of the Danske Bank Premiership game between Glentoran and Coleraine. 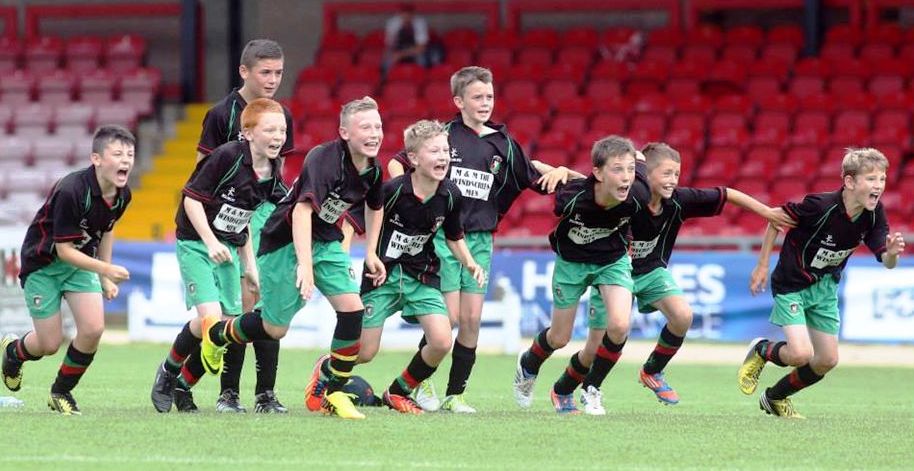 The 2001 born lads are making a big name for themselves throughout Ireland, having won the Irish Cup 2 years in succession, and subsequently securing qualification to their 2nd All-Ireland Champions Cup Final next Saturday in Dublin.

The Foyle Cup win is undoubtedly their most prestigious achievement to date though given the standard of opposition the boys faced during a gruelling week of fixtures in the North-West, coupled with all of the excursions enjoyed such as Go-Karting, Bowling, Arcades, trips to the Beach, the Cinema, Chinese Restaurants, and much more!

Drawn into Group A along with Donegal School Boys, Dergview, and The Bertie Peacock Youth League, and with only top spot in the group guaranteeing qualification to the Knock-Out stages, the management team knew it would be a big ask for the boys to stay in the competition proper past Day 3.

But to finish top against the odds is just what the boys done, remarkably winning 3 out of 3 against some of the toughest teams they have ever faced.

The campaign kicked off on Tuesday 23rd July against The Bertie Peacock YL, and within 90 seconds we found ourselves 1-0 down, a sign of the task lying ahead of the lads. But 3 points were secured with a great come back in the 2nd half through goals from David Sloan, Matthew Strain, and new signing Josh McAteer. 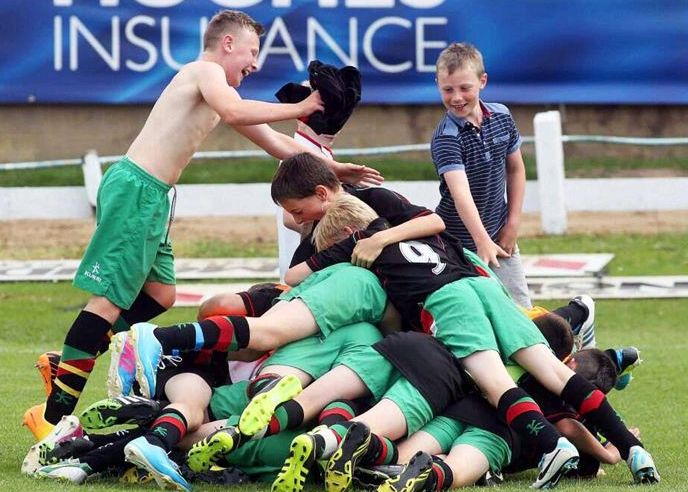 Match day 2 saw the wee Glens take on Dergview, a team they had not previously heard of let alone know anything about, and again it proved another titanic struggle against the big country lads. There were huge sighs of relief as Ben Cushnie bagged his brace and the winning goal 2 minutes from time.

The Big Test – Day 3 will live long in the memory for its Epic conclusion. Donegal Schools are undoubtedly the best team the boys have ever come up against, a very big strong physical team with an abundance of pace in their forward line and an ability to pass & move the ball very quickly. The boys struggled early on to get to grips with the high intensity of the Southern lads movement, and lack of time on the ball due to being closed down extremely quickly by physically stronger kids. But amazingly they defied the odds again and kept the score at 0-0 when they really could have been 3 down. As the game wore on the Glens began to pick their opponents off on the counter attack and grow in confidence, resulting in them taking the lead through Centre-Back Lewis McGarvey with one of his trademark long range free kicks. Donegal struck back however to make it 1-1, before Josh McAteer restored the Glens lead with 5 minutes to go.

Surely that was it, just hold on now and the boys were home free… They always have to do things the hard way though, and allowed Donegal a soft equaliser in the 2nd minute of stoppage time. With a draw not enough to guarantee a best runner up spot on goal difference, there was huge disappointment amongst the parents & fans. But the beauty of this young team is that they never believe they are down and out until they hear the final whistle. Last throw of the dice and a long ball forward from Keelan Quigley forced a throw-in on the edge of the Donegal box. Full–back Cameron Beacom-Hurle launched it goalwards, and Ben Cushnie with his trickery created an opening for the unselfish Eoin Brown to lay the ball back to Josh McAteer who slammed it into the roof of the Donegal net. When the game restarted from the centre spot the referee immediately blew the final whistle and qualification to the Knock-Out round was secured in dramatic fashion! Memories of Sean Armstrong with the header flooding back!

The Quarter Final on the Friday morning was largely uneventful and proved a welcome break from the tough games faced to date. Finishing top of the group seeded the Glens in the draw for the next round, and a fairly comfortable 4-0 win over Newry & Mourne District paved the way to a Semi Final clash with Cavan/Monaghan later that night. Goalscorers were Ben Cushnie, Eoin Brown, Matthew Strain and Odhran Connolly.

One step away now from the Big Day out at The Brandywell, the boys recuperated with an afternoon nap, followed by a relaxing stroll on the beach, before heading off to the game. 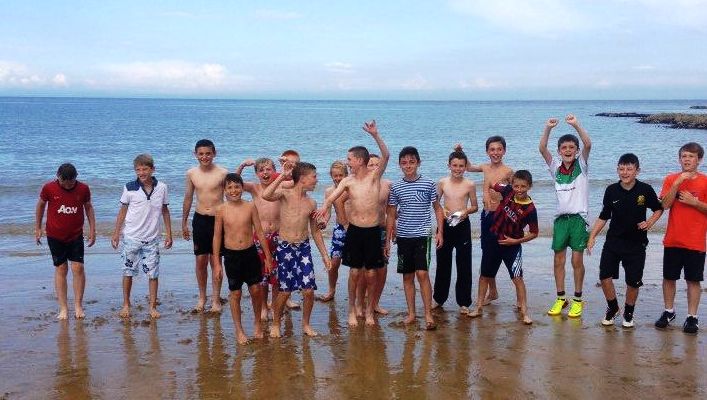 On seeing the Cavan/Monaghan side arriving at the venue, the Glens management team had to completely revise their game plan and starting line-up. This was the biggest  11 year olds ever seen, the number 14 in particular not far from 6ft tall. The wee Glens as always though did not let their club down and from the first whistle played out the game much the better side. Against the run of play however, they found themselves 1-0 down after 10 minutes of play, with a poor refereeing decision resulting in a Cavan/Monaghan free kick finding the head of the 6ft Number 14 at the back post. Despite their best efforts it looked as though this was going to be a bridge too far for the boys as with only a few minutes remaining they didn’t really look like finding a way through the enormous Cavan/Monaghan defence. But amazingly and yet again with the chips down, the Glens battled right to the end and got their reward! Deep into injury time Malachy Smith sent a glancing header goalward from a last ditch corner kick, only to see a Cavan defender punch it off the line, the referee pointing straight to the spot awarded the penalty. Dead-Ball specialist Lewis McGarvey hammered home to level the tie and give the Glens the psychological edge going into the dreaded penalty shoot-out. No extra-time in this competition, straight to penalties we went and the Glens converted all 5 through Lewis McGarvey, Ben Cushnie, Ethan Warnock, Eoin Brown and Matthew Strain. Goalkeeper Paul McLaughlin was the hero saving Cavan/Monaghans last kick and sparking scenes of celebration!

The bus journey back to the Uni Halls was both loud on the coaches’ ears, and eventful to say the least!

Onto the final itself and we faced a familiar old foe in Dungannon Swifts having played them in the Irish Cup Final a few weeks previous. The team enjoyed the Cup Final build up at the famous Brandywell Stadium, home Derry City FC. The pitch was immaculate, the sun was out, and the conditions perfect for a good game of football by two great sides. Unfortunately though, as has proved in the past with these two teams, their brand of tactical pass & move football ended up more like a game of chess with each team cancelling each other out. But again, as with the Irish Cup Final, the young Glens shaded the match on chances with Eoin Brown missing an open net in the first few minutes, and Ben Cushnie also firing over from close range when better placed to score. As the 2nd half wore on Eoin Brown really began to come to life, driving forward and taking men on at will, the Dungannon lads just couldn’t live with him as he went by 3 and 4 at a time, cutting in towards goal Eoin unleashed a ferocious shot from 20 yards which cannoned off the base of the post. He followed this up with a similar effort 5 minutes later but the keeper smothered it comfortably. Dungannon then began to threaten in the closing stages, and again it was playmaker Fergal McGarrity doing all the damage, but besides one penetrating passage of play in the closing minutes, they failed to trouble Paul McLaughlin with any real clear cut chances. With the two sets of players running on empty after a long hard week, there was a feeling that both were glad to see the Final whistle, even though it meant a third penalty shoot-out in 2 years against one another. With the Glens having defeated Dungannon on penalties in the Irish Cup Semi Final in 2012, and Final in 2013, could we really make it 3 in a row? It looked as though our luck was out on this occasion with Lewis McGarvey and Josh McAteer both missing the target, but yet again as he has done so many times in the past goalkeeper Paul McLaughlin came to the rescue. Paul brilliantly saved two Dungannon penalties, and then scored one himself. Ben Cushnie scored his spot kick, but when Dungannon made it 2-1, the responsibility fell to young Dylan Bell to land the clubs 2nd Foyle Cup in history, and wee Dinger did not disappoint as he stepped up and slotted the ball home with ease! 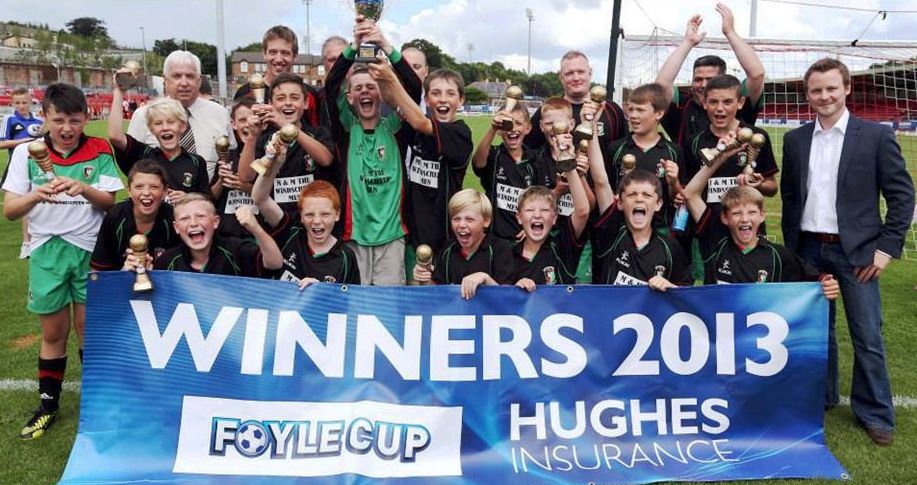 And so the wee Glens had created their own little piece of history for Glentoran FC, and best of all they came home like a band of brothers after, in their own words, the best week of their lives! 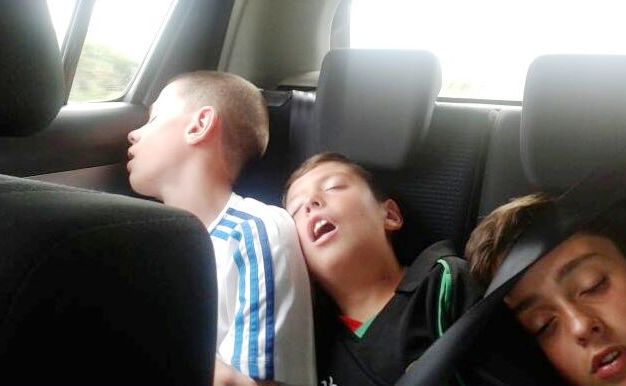