Today's installment in 'Cup Final Countdown' reviews two of Glentoran's most famous Cup Final wins. It was 30 years ago to this very day when Glentoran and our cockerel mascot brought the 1983 Cup back to East Belfast.

After a decade of disappointment the Irish Cup finally came back to the Oval in 1983. We got our cup campaign underway with an emphatic 4-nil victory over Ballymena Utd and followed that up with a 2-nil home win against Ballymoney Utd. The quarter-final draw wasn’t too kind; a trip to the Coleraine Showgrounds. But Glentoran had one of the most feared strikeforces in local football and two of them, Ron Manley & Gerry Mullan, added to Barney Bowers’ goal to see us through 3-2. The ‘big-two’ were kept apart in the semi-finals, Glentoran facing Ballyclare Comrades under the Windsor Park lights on a Friday evening. Cleary, Jameson & Manley were all on target in what turned out to be a comfortable 3-nil victory. Linfield were to defeat Ards the following day to set up a repeat of the 1973 final.

Windsor Park was once again the venue for the decider on Saturday 30th April 1983. Gerry Mullan gave Glentoran the lead but a Lindsay McKeown penalty levelled things up. Late on Johnny Jameson scored what we thought was a winner but the officials decided that he committed some kind of infringement and disallowed the goal. The replay took place at the Oval a week later. A large cockerel bedecked with red, green & black ribbons, strutted around the Oval prior to the kick-off. It was to prove a lucky mascot too! Two goals in quick succession by Johnny Jameson (30 & 33 mins) were decisive and although Martin McGaughey pulled one back 15 minutes from time there was to be no denying the Glens. The only downside of the day was the late dismissal of Jim Cleary but even that could dampen the excitement in East Belfast. The Cup was back home. 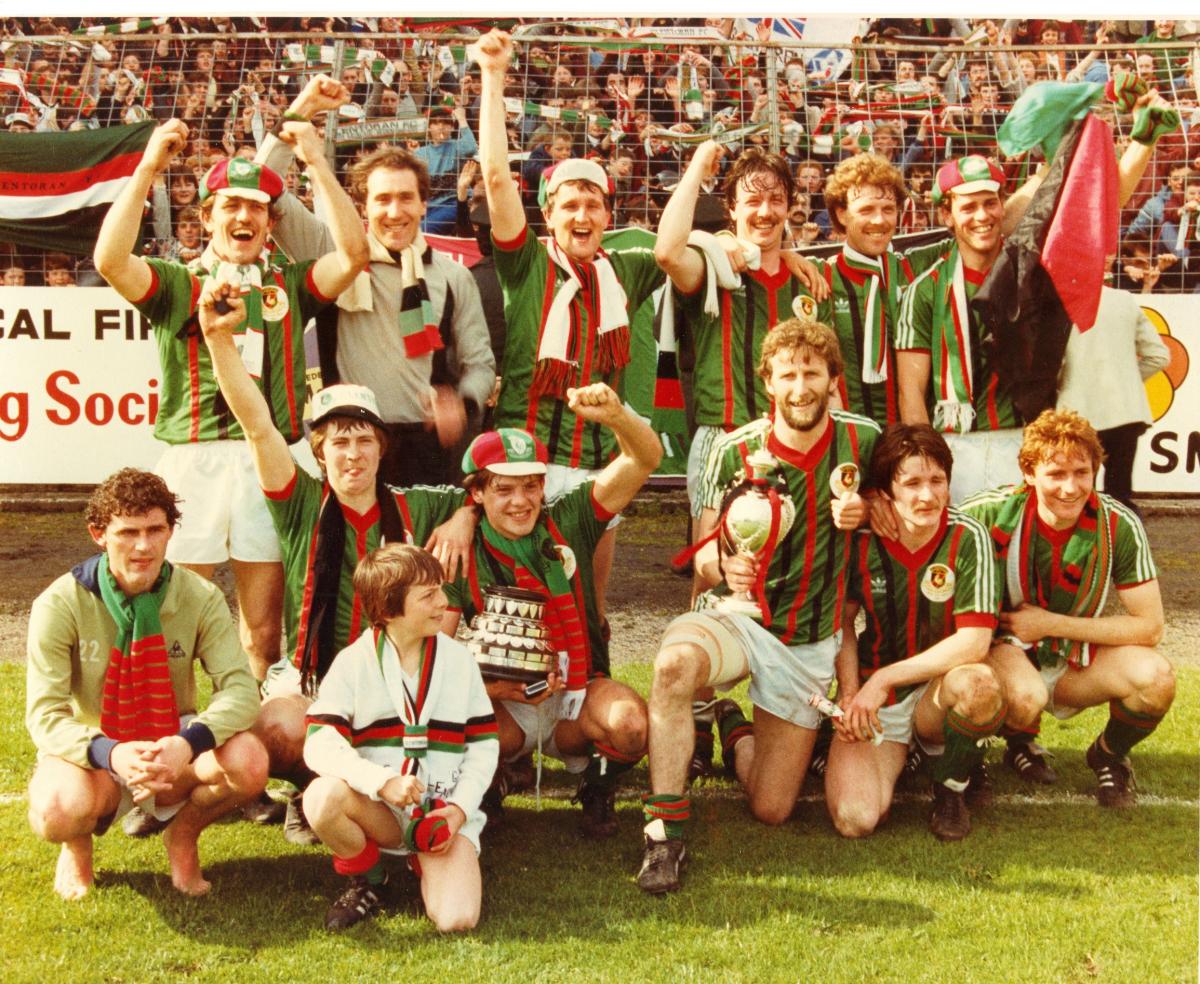 In 1985, Glentoran wanted to make up for the disappointment of losing to Carrick in 84's semi-final and we drew Carrick again in the first round. There was to be no repeat of the semi-final defeat of a year earlier. This time the Glens were 3-nil winners; the goals coming from Gary Blackledge (2) and Gerry Mullan. Billy Johnston had taken over the managerial reigns after Ronnie McFall's sacking by the time we faced Ballyclare Comrades in round two. The tie required a replay after a 2-2 draw at Dixon Park (Blackledge & Cleary) and although Comrades took the lead at the Oval, a Gary Blackledge hattrick was enough to put Glentoran safely through.

A trip to Distillery in Round 3 turned out to be a bit of a formality; the Glens scoring three times without reply (Cleary, Moore & Bowers pen.). That set up a semi-final against Coleraine at Windsor Park. The Bannsiders had much the better of the game and probably deserved to make it through but sometimes a team gets the feeling that their name might just be on the cup. Felix Healey put Coleraine ahead straight from a corner kick in the 44th minute and then on 51 minutes McCoy had an open goal and looked to have made it 2-nil. Terry Moore’s leg got in the way however and the Glens retained hope. On 81 minutes a Gerry Mullan effort hit the post but Raymond Morrison was on hand to net an equaliser. ‘Nuts’ struck again 2 minutes from time and although McCreadie hit the bar, Glentoran held on to make the final. Linfield stood once again between them and the Irish Cup.

Glentoran won the toss for the final venue and on 4th May 1985 the cockerel was back strutting his stuff on the Oval pitch. He’d a mate with him this time; a blue pig! If only the game had been as interesting! As in ’83, Gerry Mullan gave the Glens the lead only for a George Gibson header to level the tie at 1-1 on 44 minutes. The second half couldn't produce a winner and so it was back to Windsor Park a week later for a replay. A single goal decided the destiny of the cup. In the 36th minute full-back, George Neill found Gerry Mullan and his cross-shot was turned into his own net by Paul Mooney. Linfield tried in vain for an equaliser but it wasn’t to be and Glentoran maintained their record of not having lost to Linfield in an Irish Cup final since 1945. The cup was at the Oval for the 11th time. 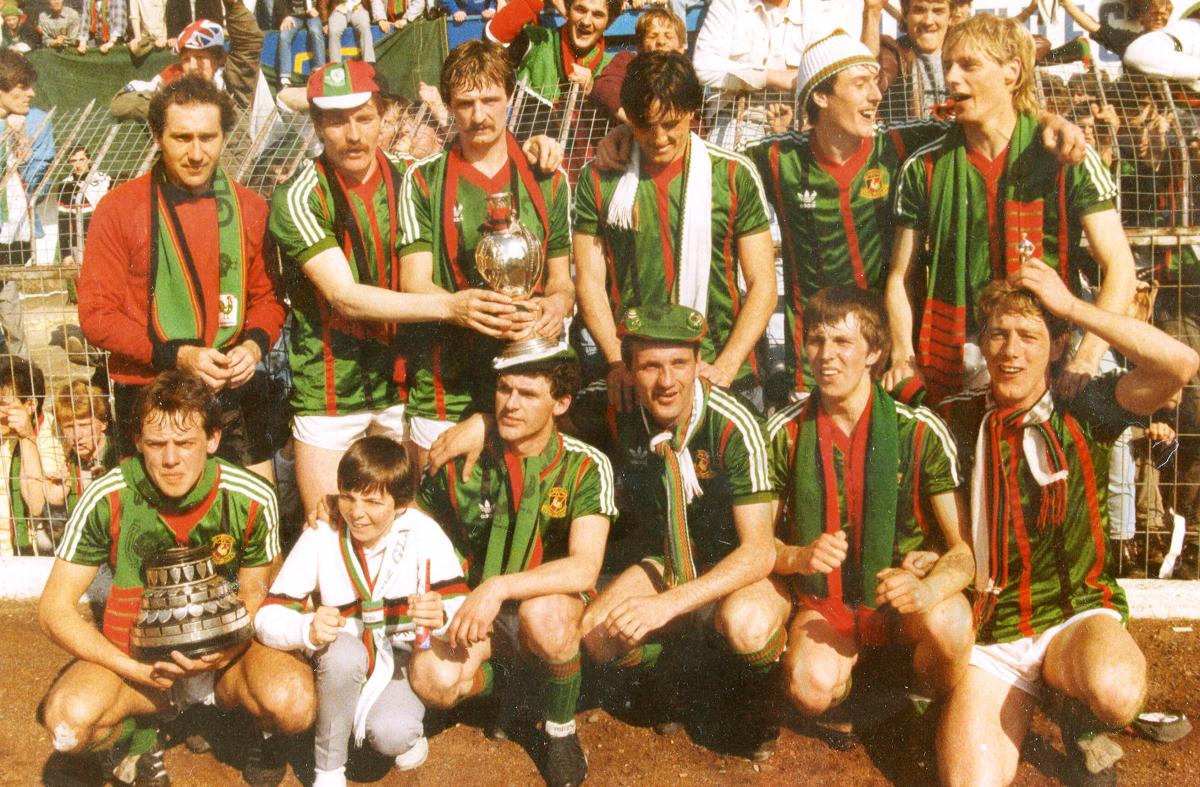