Despite an early goal from Alex O'Hanlon, Glentoran were well beaten by Danske Bank Premiership leaders, Crusaders this afternoon. With Willie Garrett having picked up an injury on Tuesday evening's narrow victory over Ballinamallard Utd, Jonny Addis came back into the centre of the defence alongside Calum Birney. Kym Nelson returned at left back with Ross Redman dropping to the bench and also amongst the substitutes was John McGuigan, the attacking midfielder also picking up an injury in the midweek fixture. 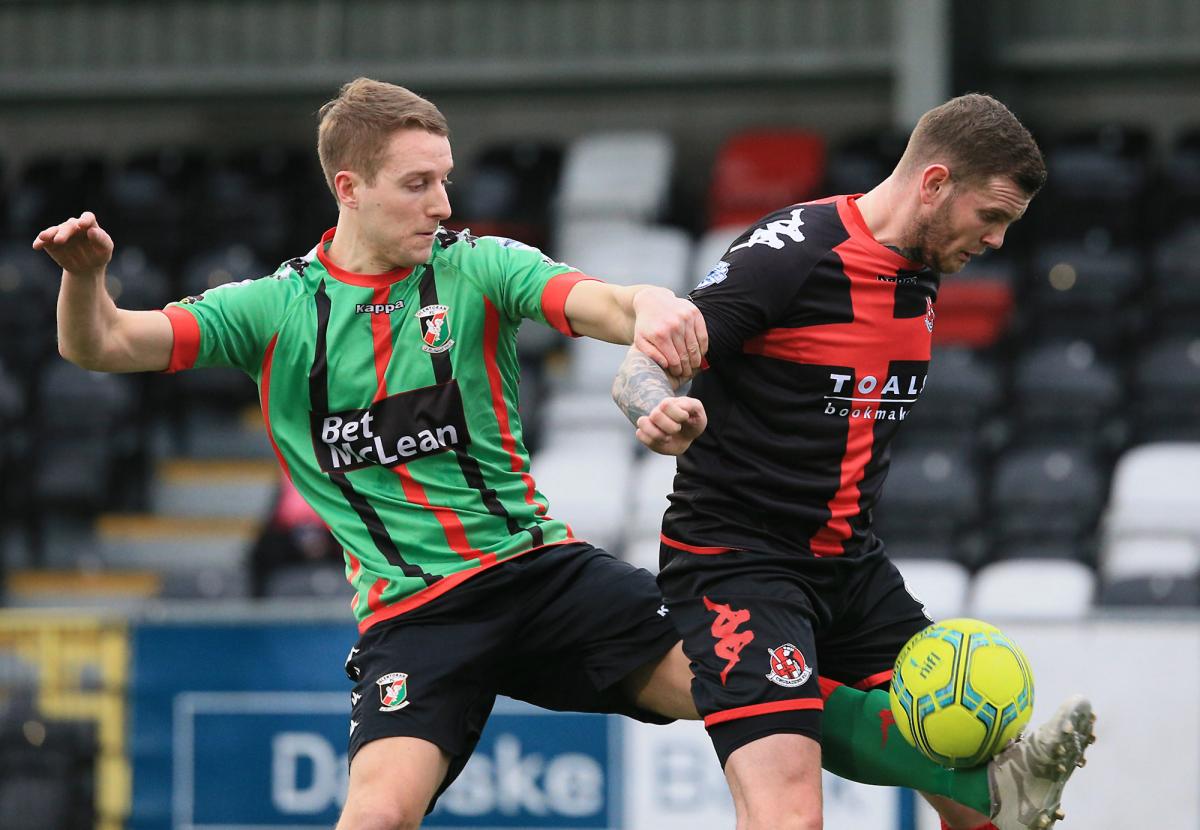 5 minutes into the game the Glens went in front. Alex O'Hanlon's sweet strike from the left corner of the 6-yard box was the result of persistence from Dylan Davidson to get his cross in from the left and Curtis Allen's neat lay-off into the path of Glentoran's recent signing. O'Hanlon's low, left footed drive left Brian Jensen rooted to the spot as the ball found the bottom corner of the net. A minute later there was a long range attempt by Curtis Allen but this time Jensen was able to gather comfortably. For the remainder of the half it was the home side in the ascendency though with the Glentoran goal, at times, leading a charmed life. Before we'd reached the quarter hour mark Darren Murray and Jordan Forsythe had both tested Elliott Morris whilst Jordan Owens headed over from just 6 yards out. Peter McMahon did have a chance on 16 minutes when he got on the end of a Kym Nelson cross but although he controlled the ball well, he couldn't keep his shot down. 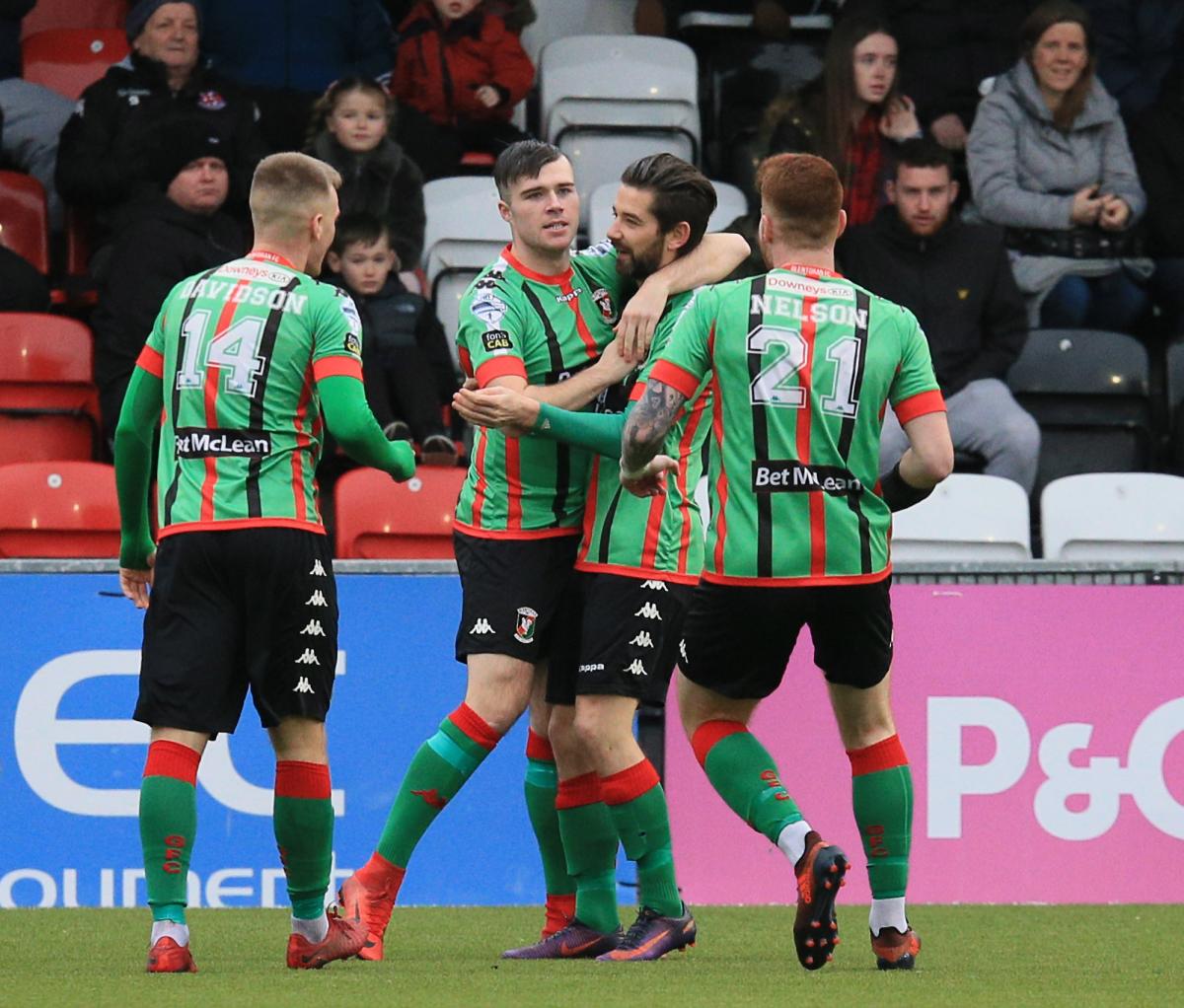 On 20 minutes Crusaders thought they'd levelled things up when Darren Murray's overhead kick hit the underside of the bar and bounced down before being partially cleared. Murray appealed in vain that the ball had crossed the line but play continued. It almost didn't matter as a lethargic Glentoran defence failed to pick up Owens and his shot from the resulting play crashed off the post. Heatley had a shot deflected for a corner on 25 minutes but it was only a matter of time before the equaliser arrived and it came on the half hour mark. A 25-yard shot from Billy Joe Burns struck the far post with Morris beaten. The defensive clearance was then met by Burns who headed back into the danger area and Owens got the better of Birney before poking home from 6 yards. Owens had the ball in the Glentoran net 10 minutes later, heading home a cross from the left but he was clearly offside and the 'goal' was ruled out. The Glens failed to hold on until half time though, Crusaders going ahead on 43 minutes. Marcus Kane lost possession to Burns on the left touchline, about 10 yards inside the Crusaders half. Burns played the ball to Gavin Whyte and he skipped past Kym Nelson before driving, unchallenged right across the 18-yard line. He cut the ball back across goal and Birney failed to intercept it, leaving Burns, who had continued his run, the simplest of tap ins at the back post. 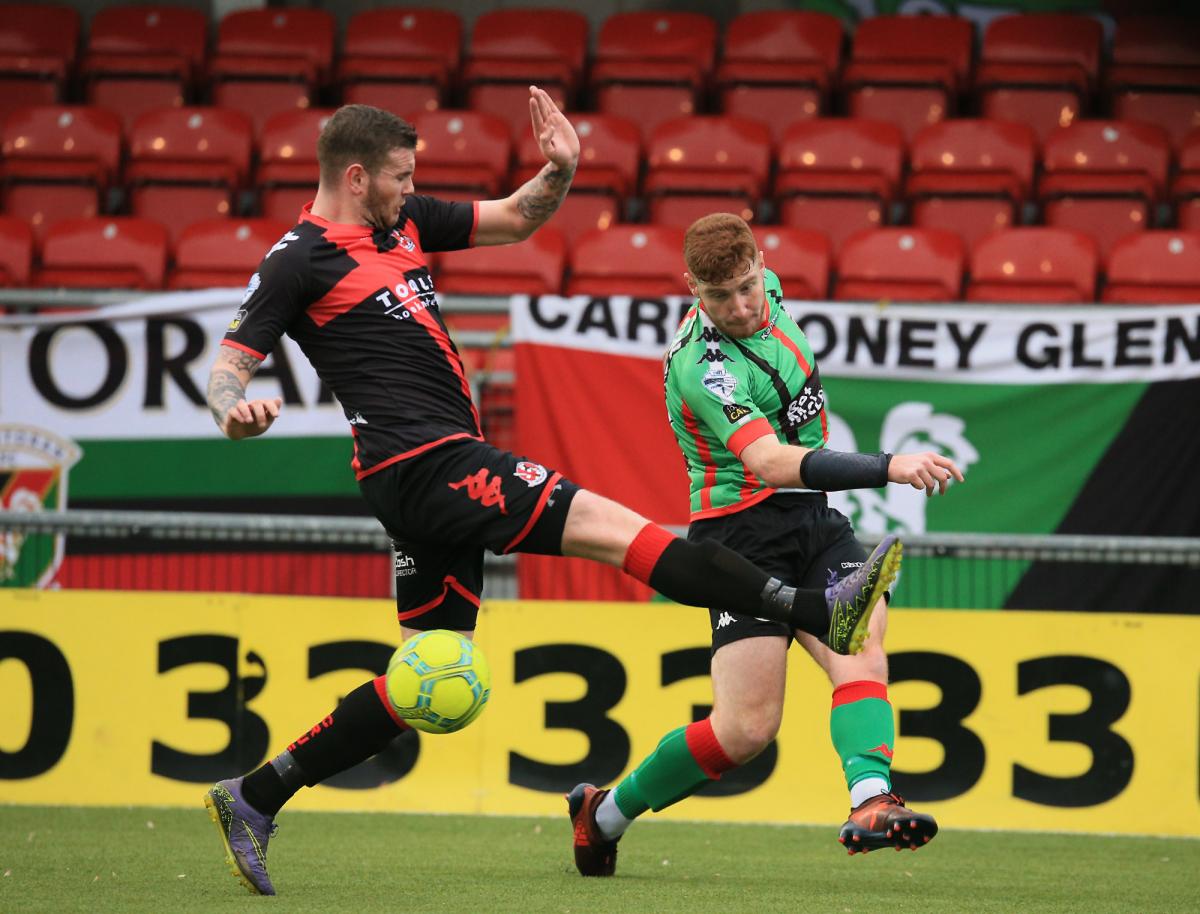 Two goals early in the second period ended the game as a contest. On 51 minutes a corner from the left was headed home by Colin Coates and then on 53 minutes another ball into the area found Gavin Whyte. Whyte got clear of substitute Ross Redman before crashing his shot past Morris from an acute angle. Game over. At times it seemed to be attack against defence as Glentoran were unable to hold the ball up in midfield or string more than one or two passes together. Dylan Davidson was the exception, the youngster working hard on the left flank but all too often ploughing a lone furrow. 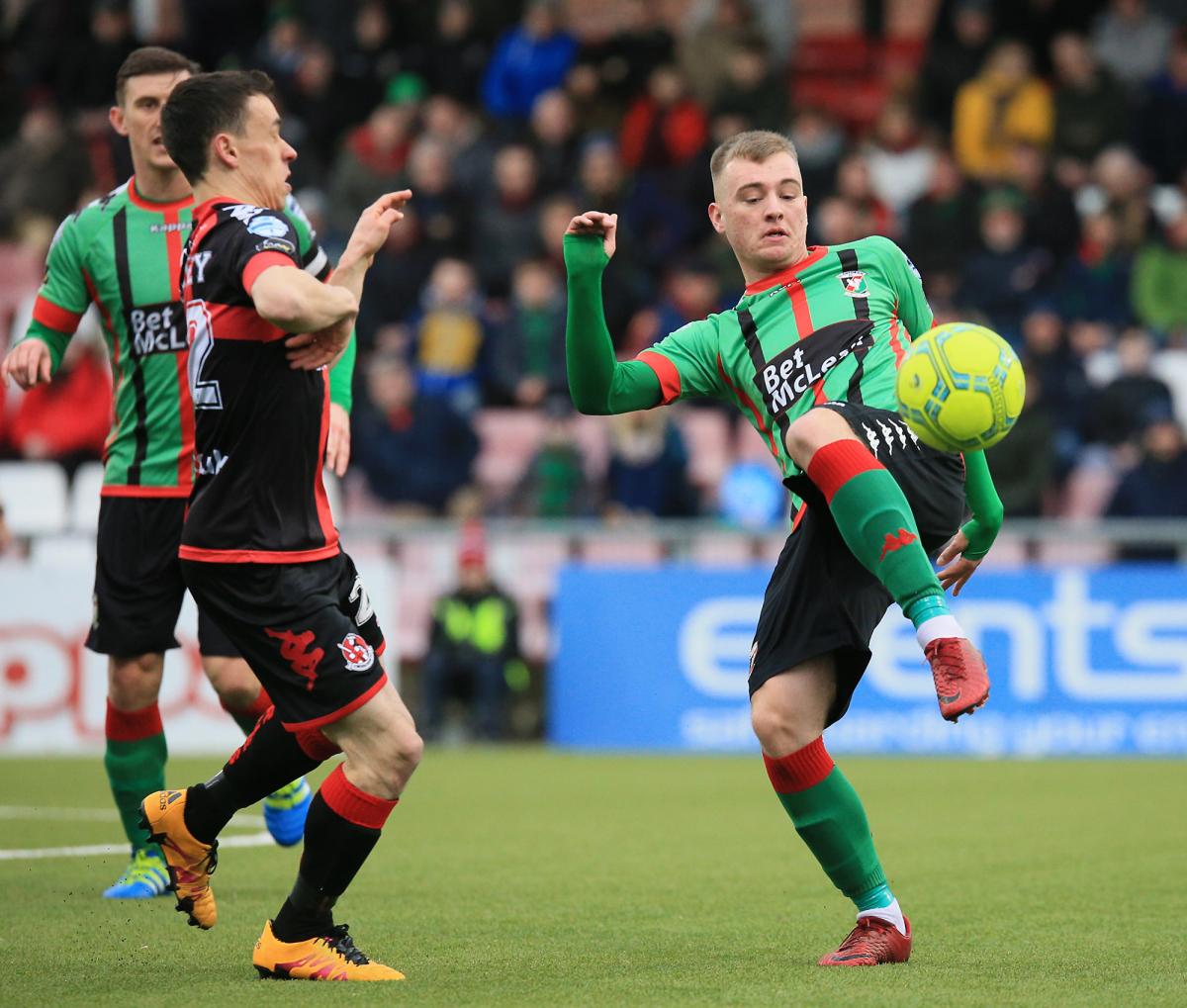 Crusaders, with the points safe, then made a couple of changes and in the latter stages Glentoran began to create a few more opportunities. Again the main provider was Davidson. From one of his corners, Curtis Allen was unlucky to see his header his the underside of the crossbar. Substitute, James Knowles perhaps should have done better with a direct free kick just outside the area. Crusaders were still dangerous on the break and Heatley almost made it 5-1 in the dying minutes but he was only able to find the side netting. In stoppage time Glentoran did get a second goal and what a good finish it was from Robbie McDaid. A long ball forward was chased down by the Glens striker and with Brian Jensen rushing out, McDaid kept his cool and calmly lifted the ball over the big keeper and into the unguarded net. 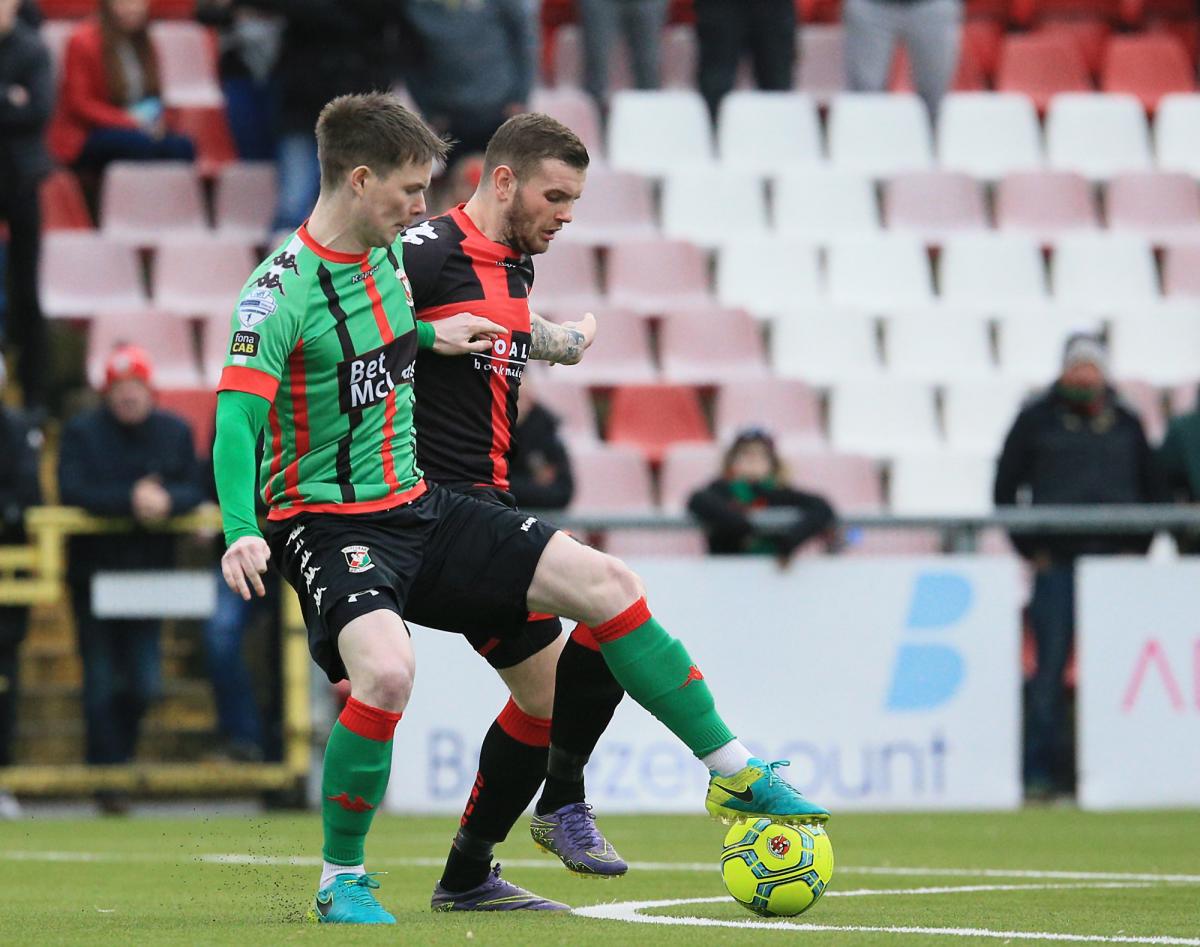 So Glentoran failed to close the gap on 6th placed Ballymena United. A big week awaits with games against Carrick Rangers and Ards. Gary Haveron's side cannot really afford any further slip ups. 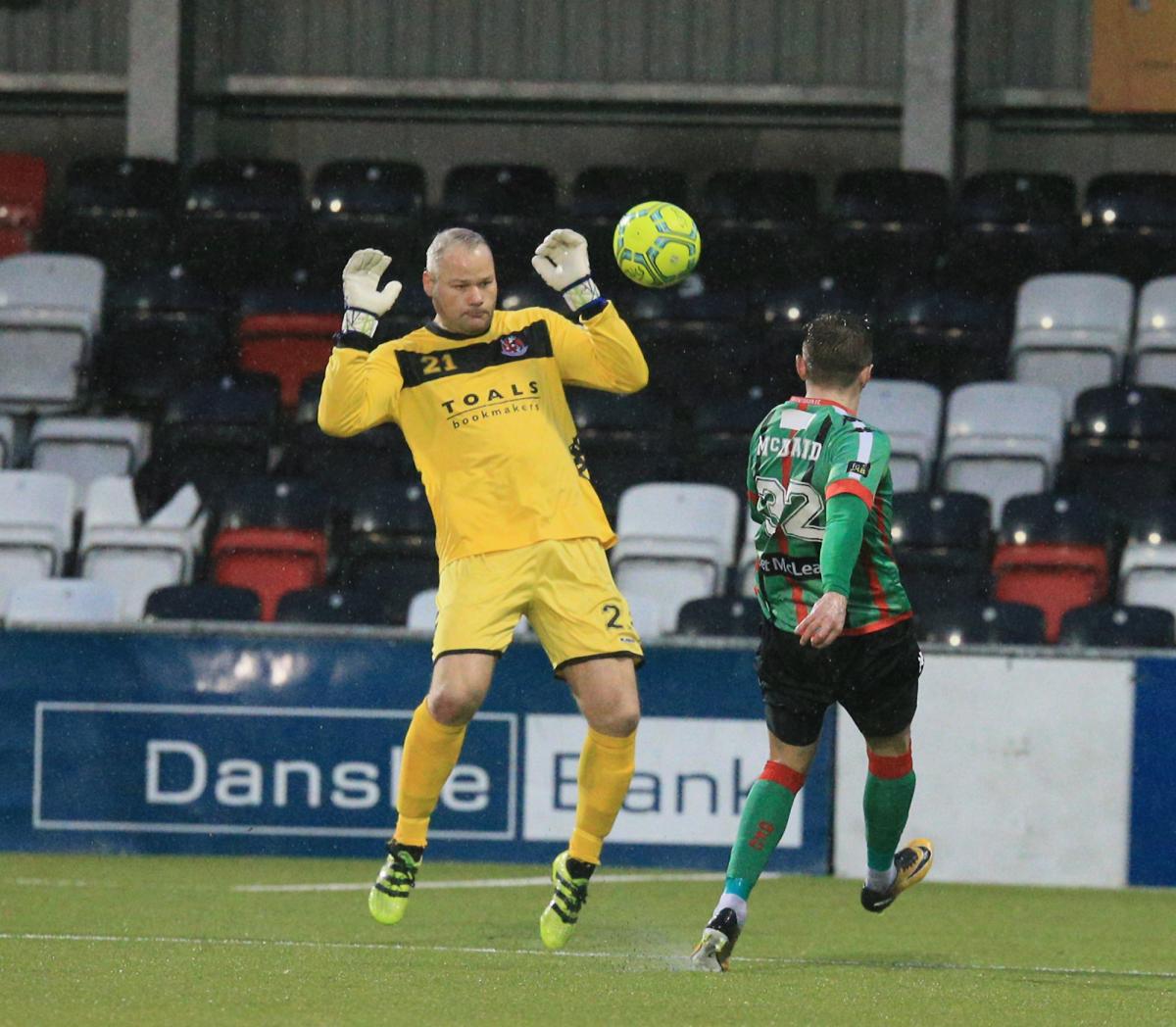 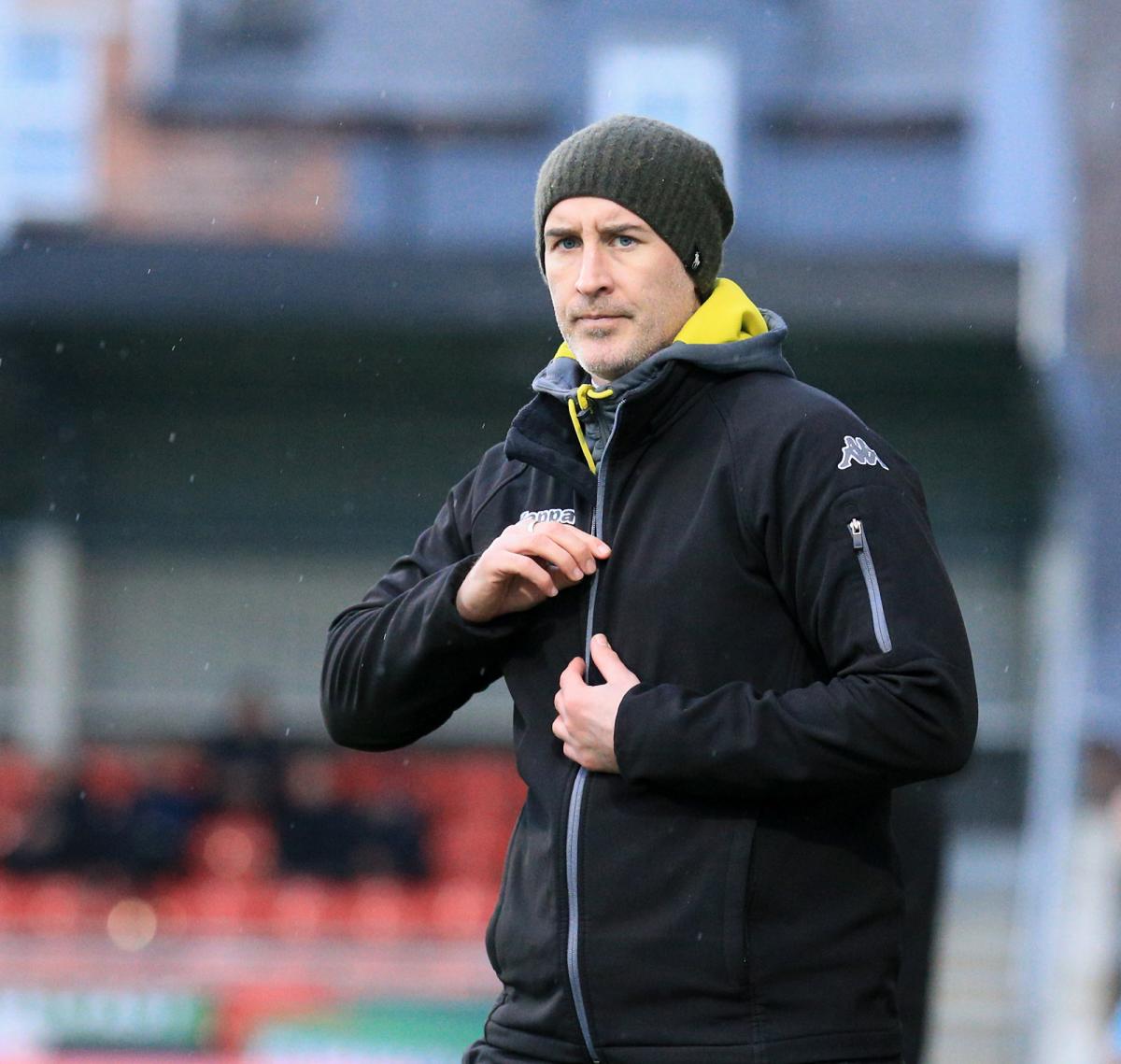