There were only 4 survivors from the eleven who started against Cliftonville last Friday night for this evening's Bet McLean League Cup tie at the Coleraine Showground - Pepper, Kane, Stewart and Gallagher. However, the youthful, much changed side put up a battling performance and were perhaps unlucky not to take the tie to extra time, especially considering they had to play over an hour with 10 men following the dismissal on 28 minutes of James McCarthy.

The first quarter of the game was pretty much incident free, bar a yellow card for McCarthy on 17 minutes; both sides struggling to create any real clear-cut chances. A difficult task became much harder when McCarthy received a second yellow card just before the half hour mark following a needless challenge 10 yards inside the Coleraine half. Coleraine began to take advantage of their numerical advantage and on 33 minutes a cross from the left found Bradley unmarked in the 6-yard box, but the striker managed to head the ball out of the ground! Jarvis hada great chance 2 minutes later but Glentoran's returning keeper, Elliott Morris produced a fine stop to deny him. 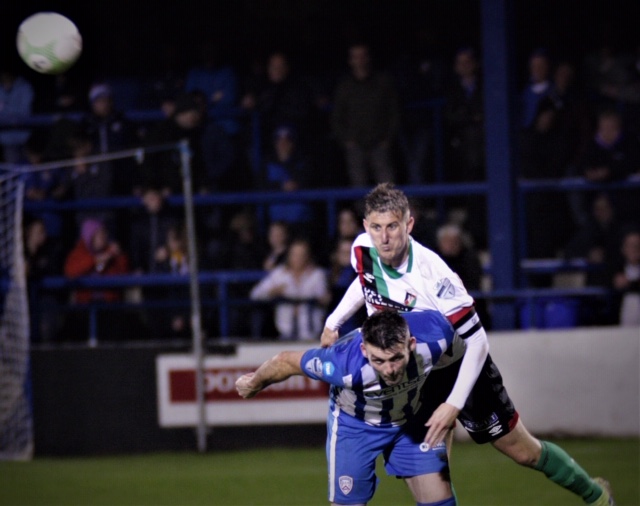 To restructure following McCarthy's dismissal, the unfortunate Salou Jallow was then substituted as manager Mick McDermott changed the side to a 4-4-1 formation with Plum replacing Jallow, Byrne and Frazer occupying the wide midfield positions with Gallagher and Plum in the centre.  Marcus Kane moved to left back and Joe Crowe back to centre half alongside Cameron Stewart. Glentoran's first effort on target came from Plum on 40 minutes but although his long-range shot was on target it lacked the power to trouble Johns in the home goal. At the other end Morris did well to tip Glackin's shot over the bar.

Just before the interval the home side were perhaps lucky not to have Jarvis dismissed when he took exception to a tackle from Pepper and grabbed the Glentoran full back when he was on the ground. Referee Hunter saw the incident , stopped play and awarded the Glens a free kick but strangely kept his cards in his pocket! Less than a minute later as the glens cleared a corner, Gallagher was breaking forward when he was taken down by Jarvis. Again, a free kick but bizarrely no caution! 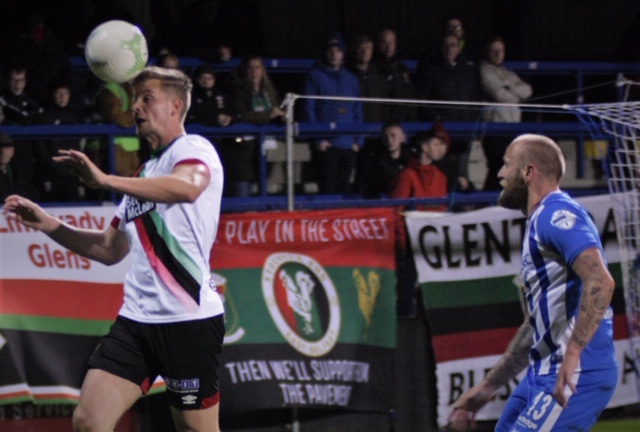 A long throw in from Marcus Kane was only partially cleared by the Coleraine defence and Plum's shot was well kept out by Johns. On 59 minutes the home side broke the deadlock when Parkhill's cross from the left was headed home by Glackin. The Glens thought they'd drawnlevel 3 minutes later but Johnny Frazer's  well headed 'goal' was ruled out by Hunter, apparently for an infringement by Stewart. It was a bad couple of minutes for Stewart as on 65 minutes he tripped Glackin in the area and Doherty tucked away the penalty.

That looked to be game over, but McDermott made a couple of changes, Van Overbeek and debutant Navid Nasseri coming on for Byrne and Duric, and we began to create some decent opportunities. The first of these fell to Van Overbeek when he latched on to Plum's superb through ball. The Dutchman drove the ball at Johns though when he really should have scored. On 72 minutes it was game on though when Frazer found Pepper and his pass to Nasseri gave the debutant the simple task of tapping the ball home.

The home side should have been reduced to 10 men on 76 minutes when Frazer was cynically taken down by McConaghie. The Glentoran number 7 was clear and it was undoubtedly a goal denying opportunity, but Hunter deemed the rash challenge worthy of just a yellow card! Plum fired wide from 30 yards and then with 81 minutes on the clock Van Overbeek's cross was almost turned into his own net by the Coleraine number 4. Johns kept the ball out, but the inrushing Jonny Frazer smashed it home only to be denied by a raised linesman's flag. 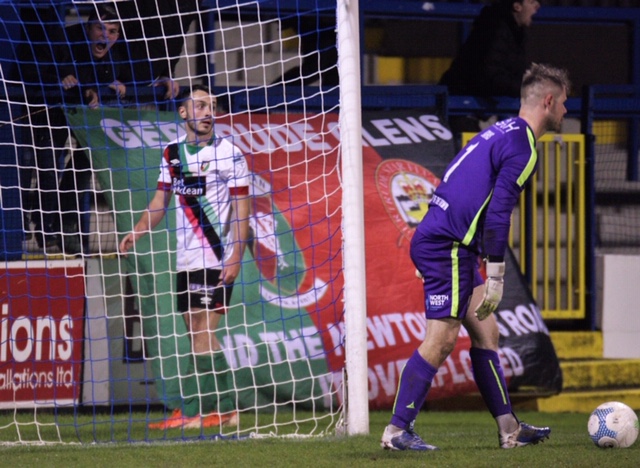