Glentoran produced an excellent performance at the Ballymena Showgrounds to claim all three points in today's Danske Bank Premiership fixture. The win moved the Glens into 7th spot and that coveted Europa League qualifying position. 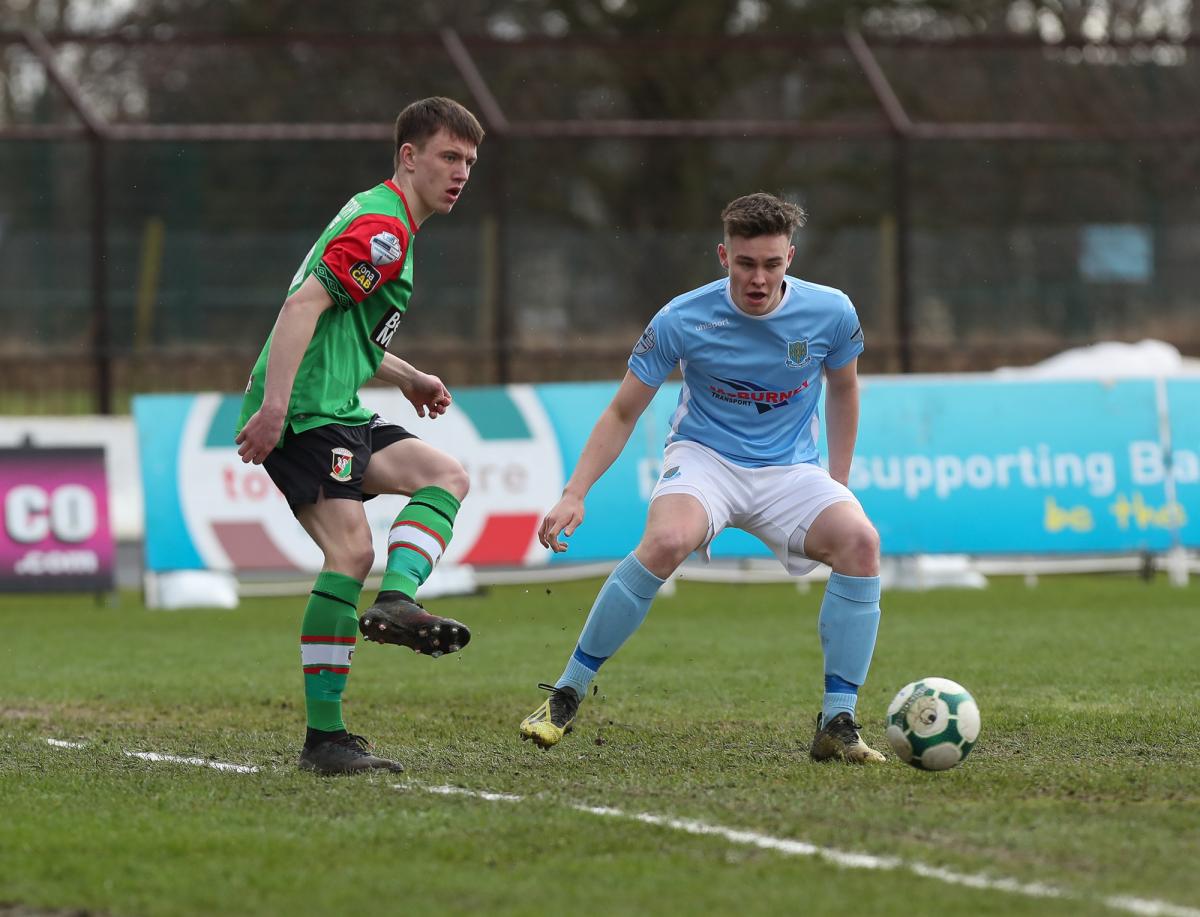 As the delighted Glentoran fans streamed towards the exits, Phil Collins was blasting from the tannoy. The song, 'Against All Odds' was probably appropriate because with Glentoran suffering with both injuries and suspensions, it was a makeshift side which faced up to a team who still had a dream of a first ever league title and who had not been beaten at home all season. 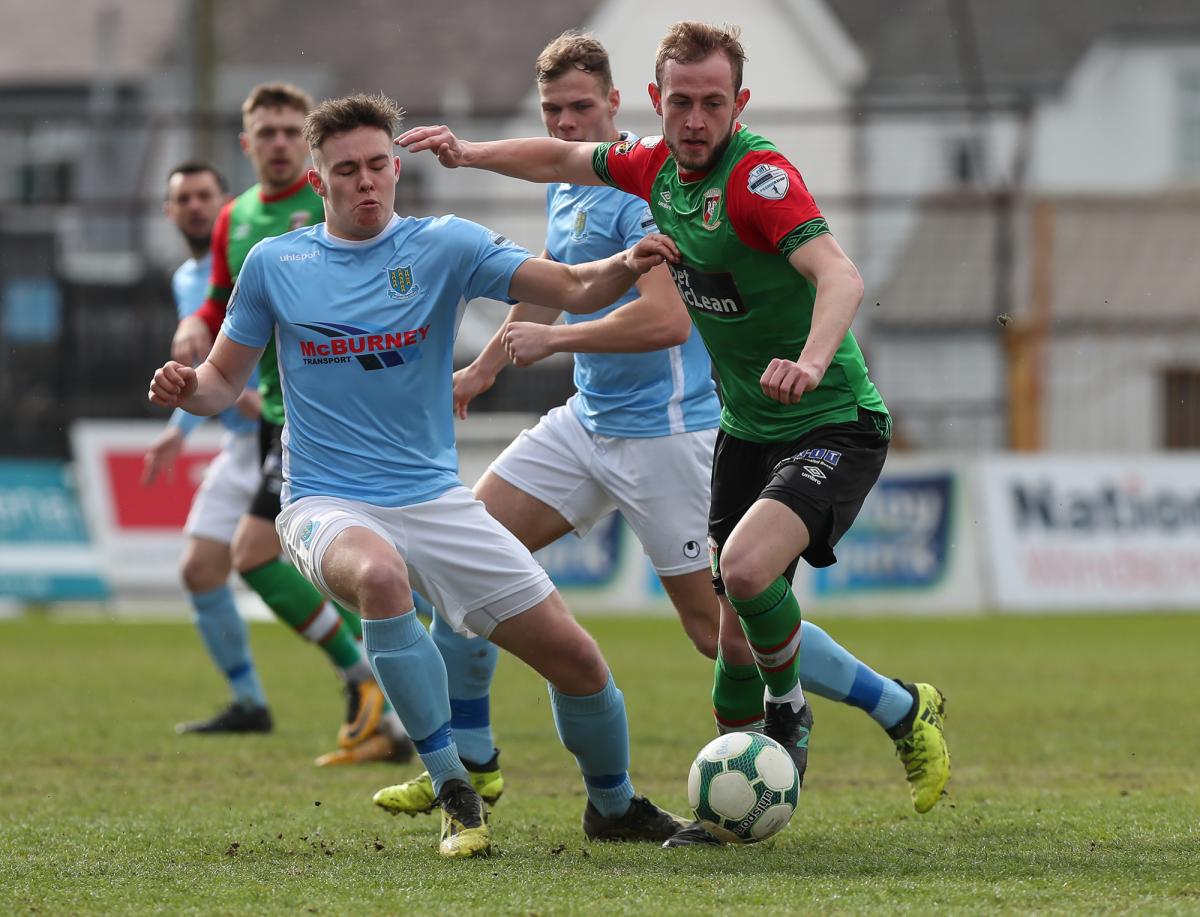 With Dwayne Nelson injured, Elliott Morris was back in goal. In defence Redman (foot) and Birney (groin) were out injured and Willie Garrett was suspended. Manager Gary Smyth opted to move skipper Marcus Kane to centre back alongside Gavin Peers with James McCarthy starting at left back. Midfield dynamo Connor Pepper was also missing due to injury and up front the prolific Darren Murray also missed out through suspension. Paul O'Neill made his first start of the campaign. 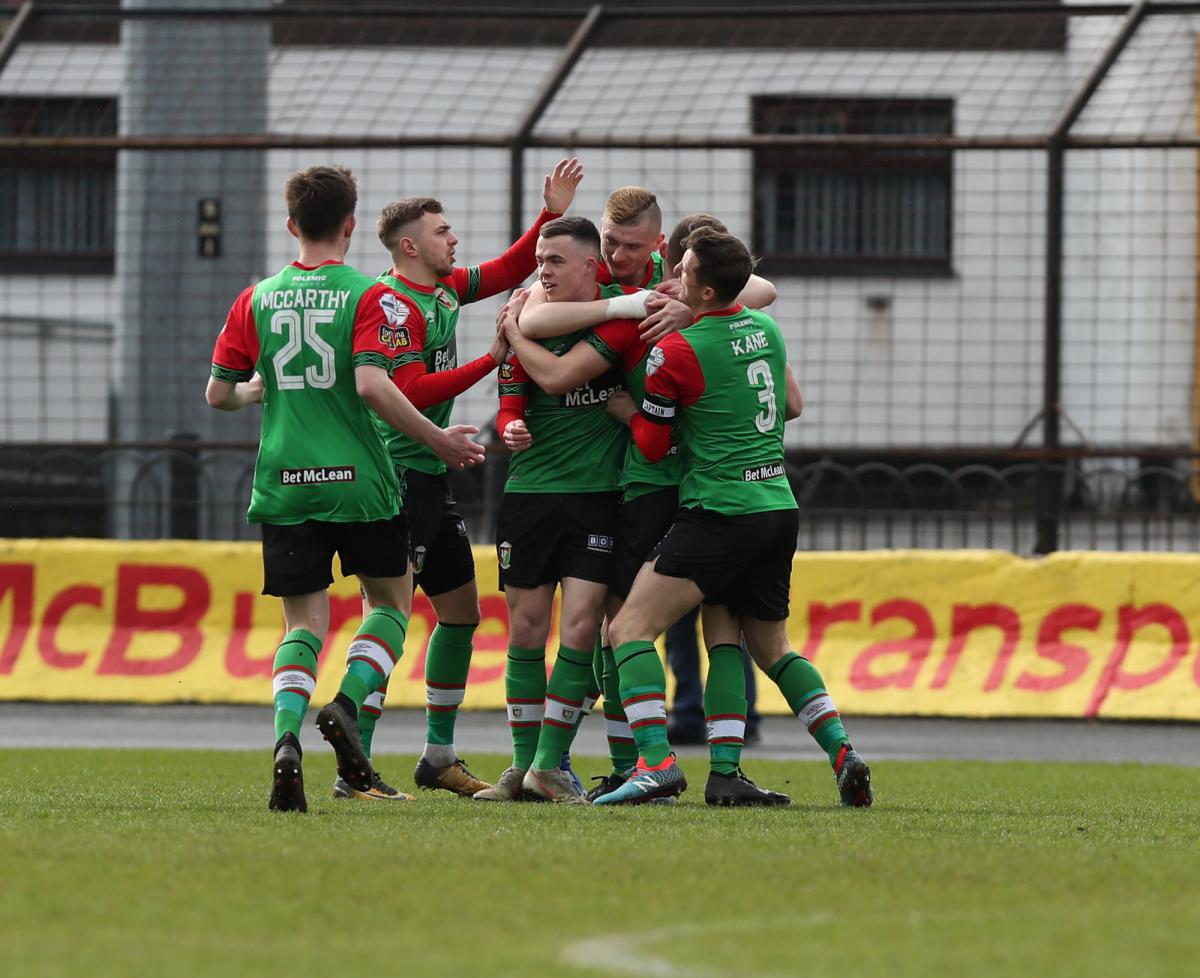 The Glens almost went in front on two minutes when a left wing cross from McCarthy found Robbie McDaid but the club's joint top scorer was just wide of the target. Less than a minute later though Glentoran went in front and what a finish it was from Paul O'Neill. McCarthy's ball down the left was picked up by Curtis Allen. His cross looked to have been over hit but O'Neill stretched and hooked the ball past the keeper and into the far corner of the net. John Herron also had a half chance with just six minutes on the clock but his twenty yard effort went wide of the post. 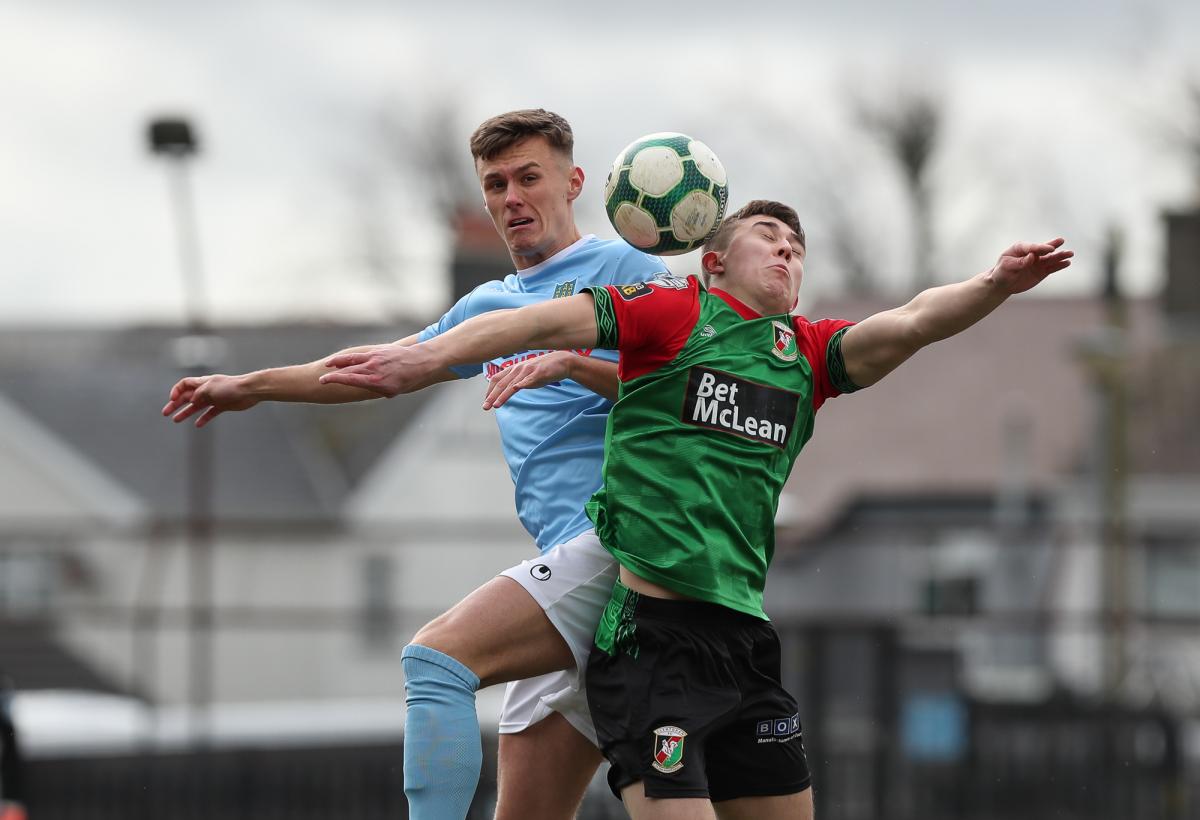 The home side's first attempt on goal came on thirteen minutes but Kofi Balmer's effort didn't trouble Elliott Morris. Midway through the half Glentoran were on top and pushing to extend their advantage. James McCarthy put two excellent crosses in from the left in quick succession but both were well defended by the home side. Paul O'Neill was also causing the United defence plenty of trouble and Albert Watson in particular was guilty of several fouls on the young striker, most though going unpunished as the linesman on the away side of the ground appeared reluctant to give anything other than throw-ins or the occasional offside decision. Just before the half hour mark, following good work on the left by Robbie McDaid, the Glens created another opportunity but Chris Gallagher saw his 25 yard drive go just over the crossbar. 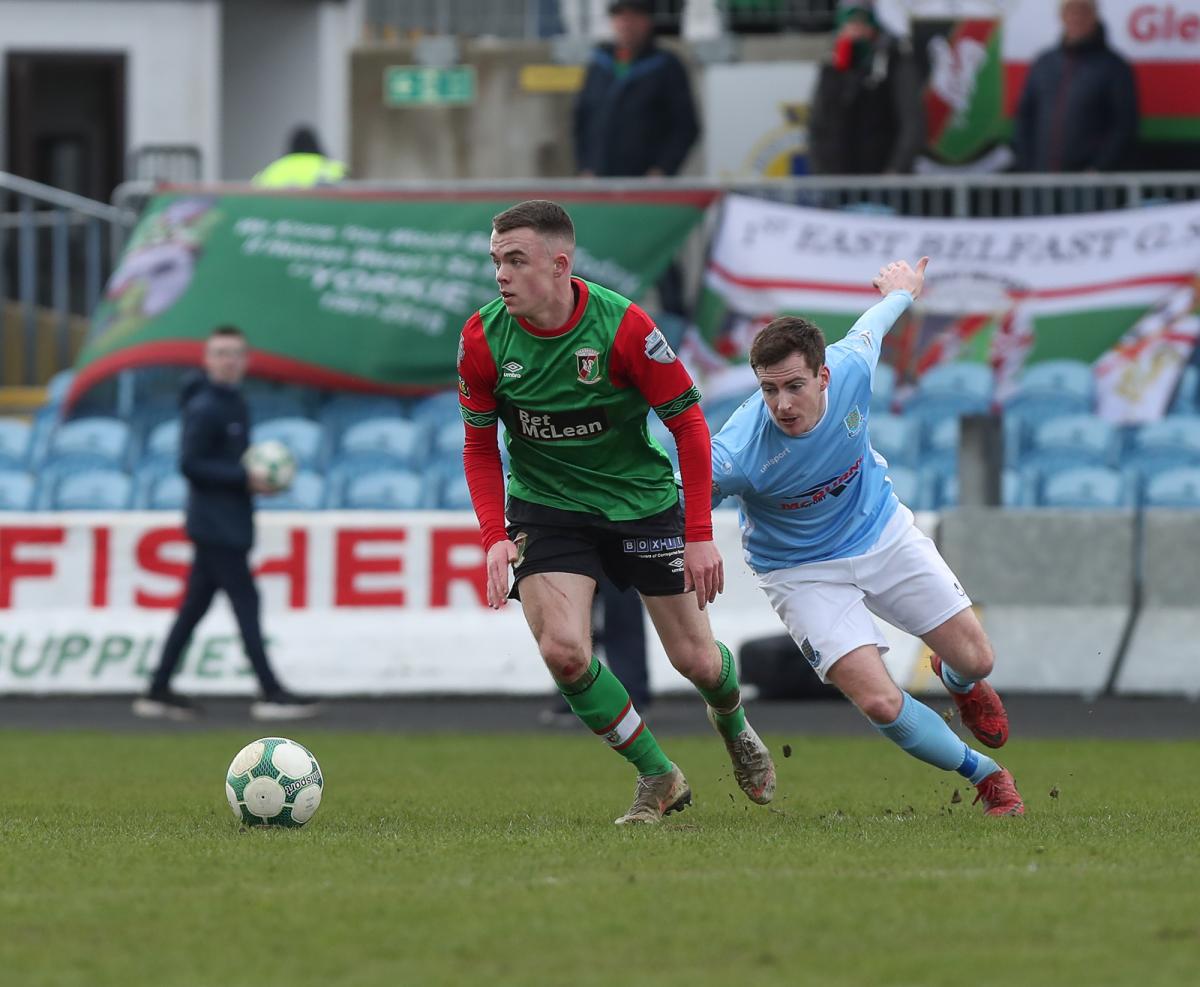 On 33 minutes Curtis Allen also had a pop from 25 yards. His shot was on target but was comfortably saved by Ross Glendinning. McDaid and O'Neill then linked up to create another chance for Allen but his dipping shot was just too high. Three minutes from the break Glendinning pulled off a great save to deny Robbie McDaid. The Glens striker had been sent clear with an excellent through ball from John Herron and his shot seemed destined for the far top corner of the goal before Glendinning got his fingertips to it. 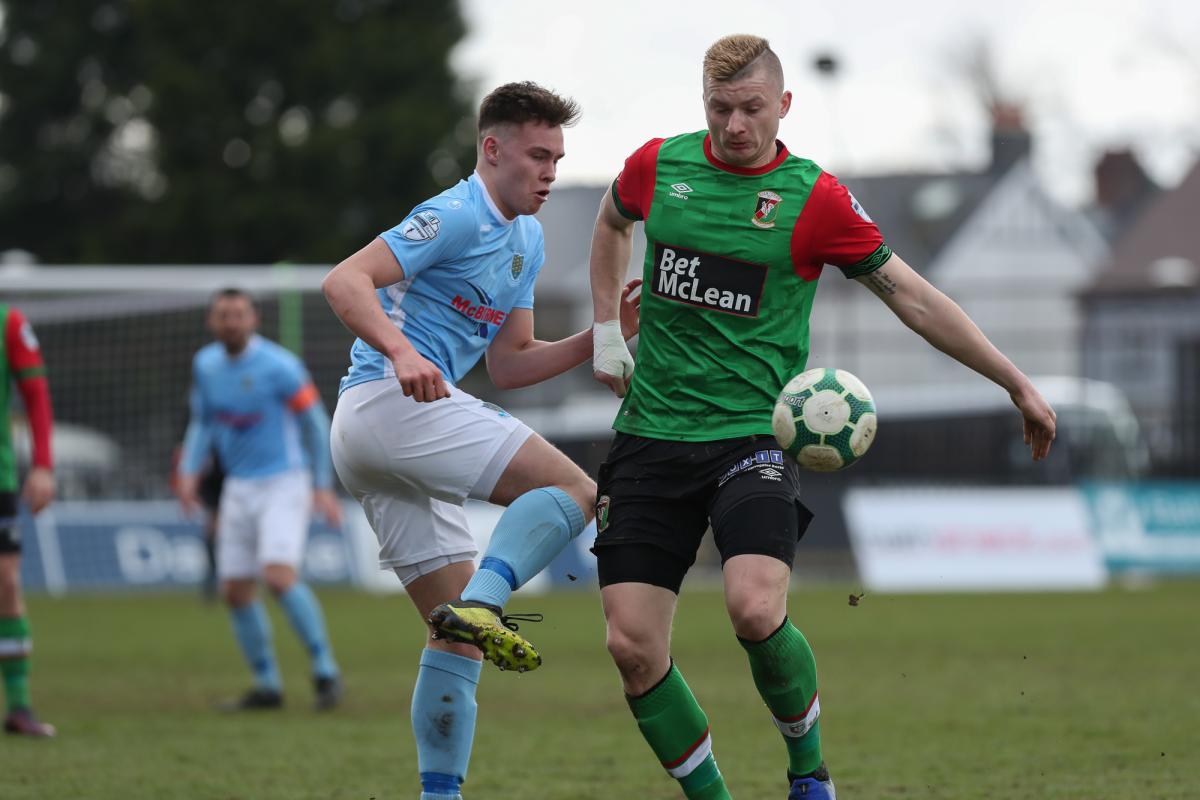 The Sky Blues almost levelled things up on 47 minutes but Elliott Morris was quick off his line to deny McGrory. The Glens then broke straight down field and Curtis Allen's cross broke for Robbie McDaid but the Glentoran number 11 shot wide. The home fans thought that they had a equaliser on 50 minutes when a cross/shot from Watson eluded everyone and almost crept in at the far post with Morris stranded. Their cheers were strangled though as the ball passed the post and hit the advertising boards. 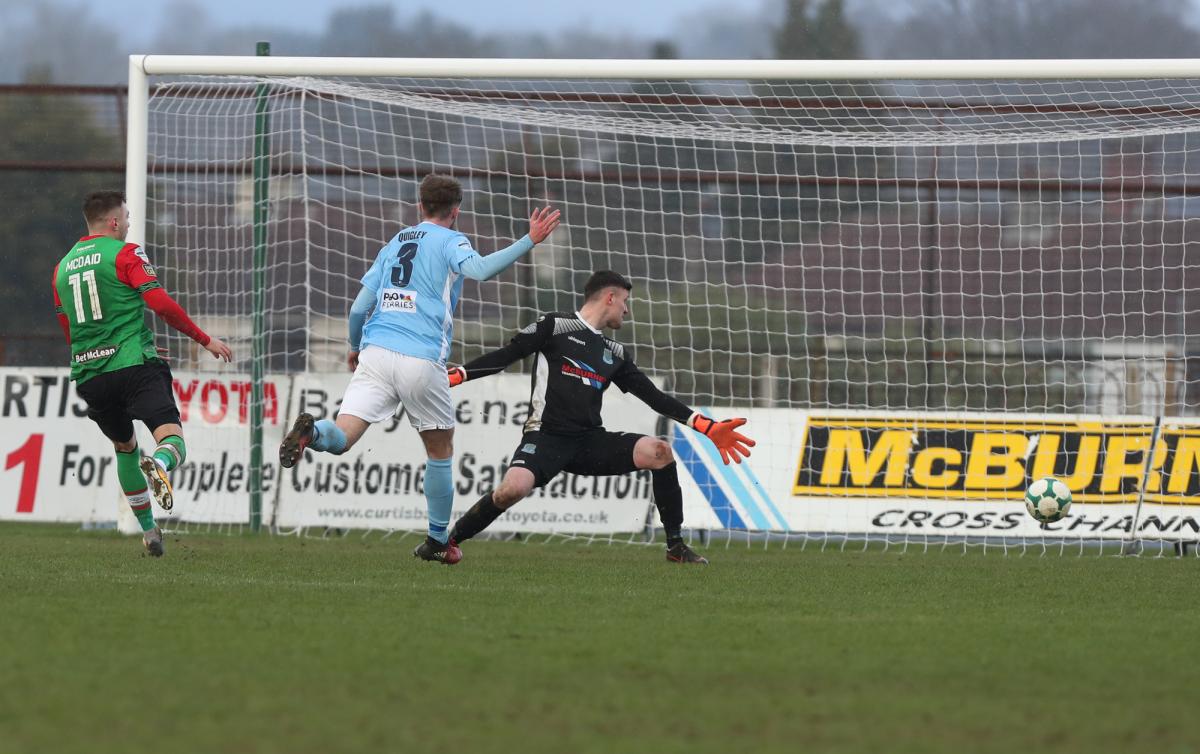 On the hour mark the Glens doubled their lead. McCarthy's long ball found O'Neill and his first time pass picked out Herron. Herron's through ball found McDaid coming in from the right and having picked up the pass 20 yards from goal, McDaid drove forward before calmly slotting past Glendinning. Moments later Glentoran should have had another chance to score when Curtis Allen was felled from behind 20 yards from goal. Bizarrely referee Shane Andrews saw nothing wrong with the challenge! Jonathan McMurray's shot was turned around the post by Elliott Morris but it was one of very few stops the Glentoran custodian had to make all game with United's forward line struggling to create many clear opportunities. 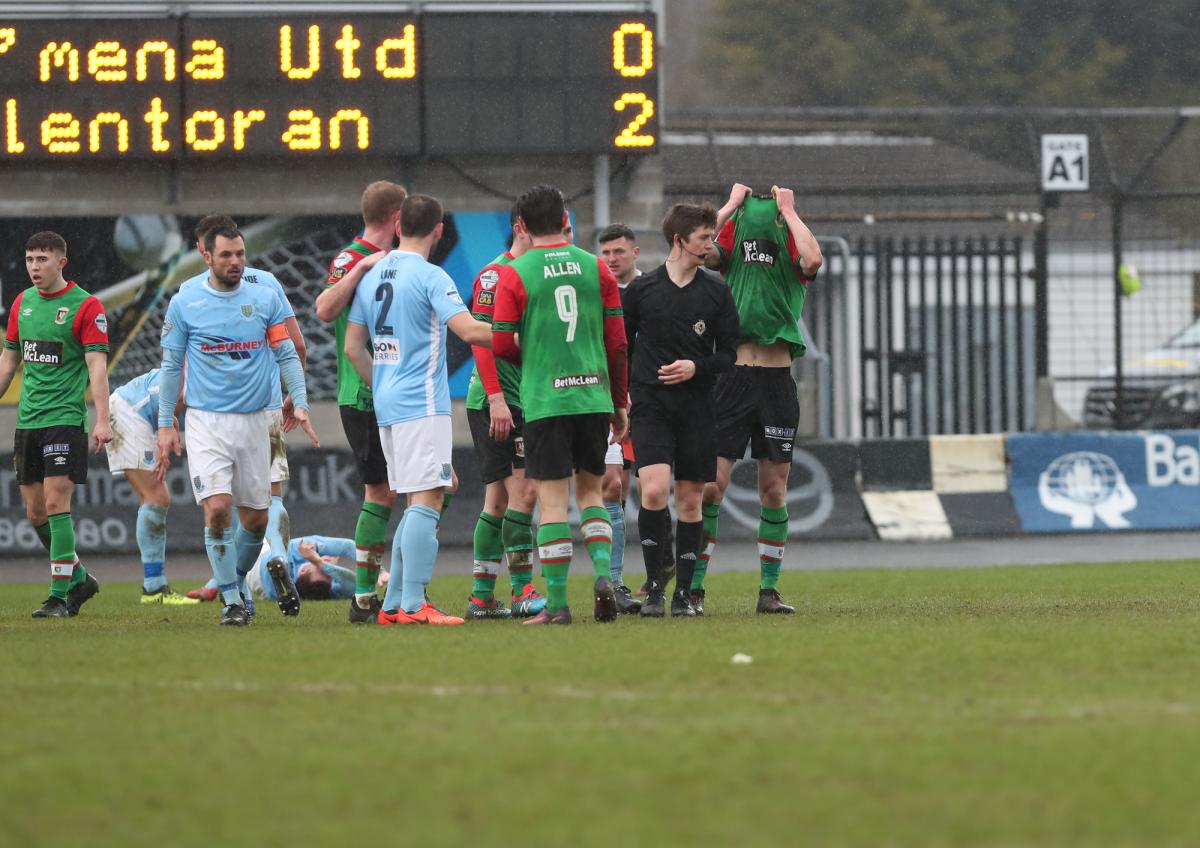 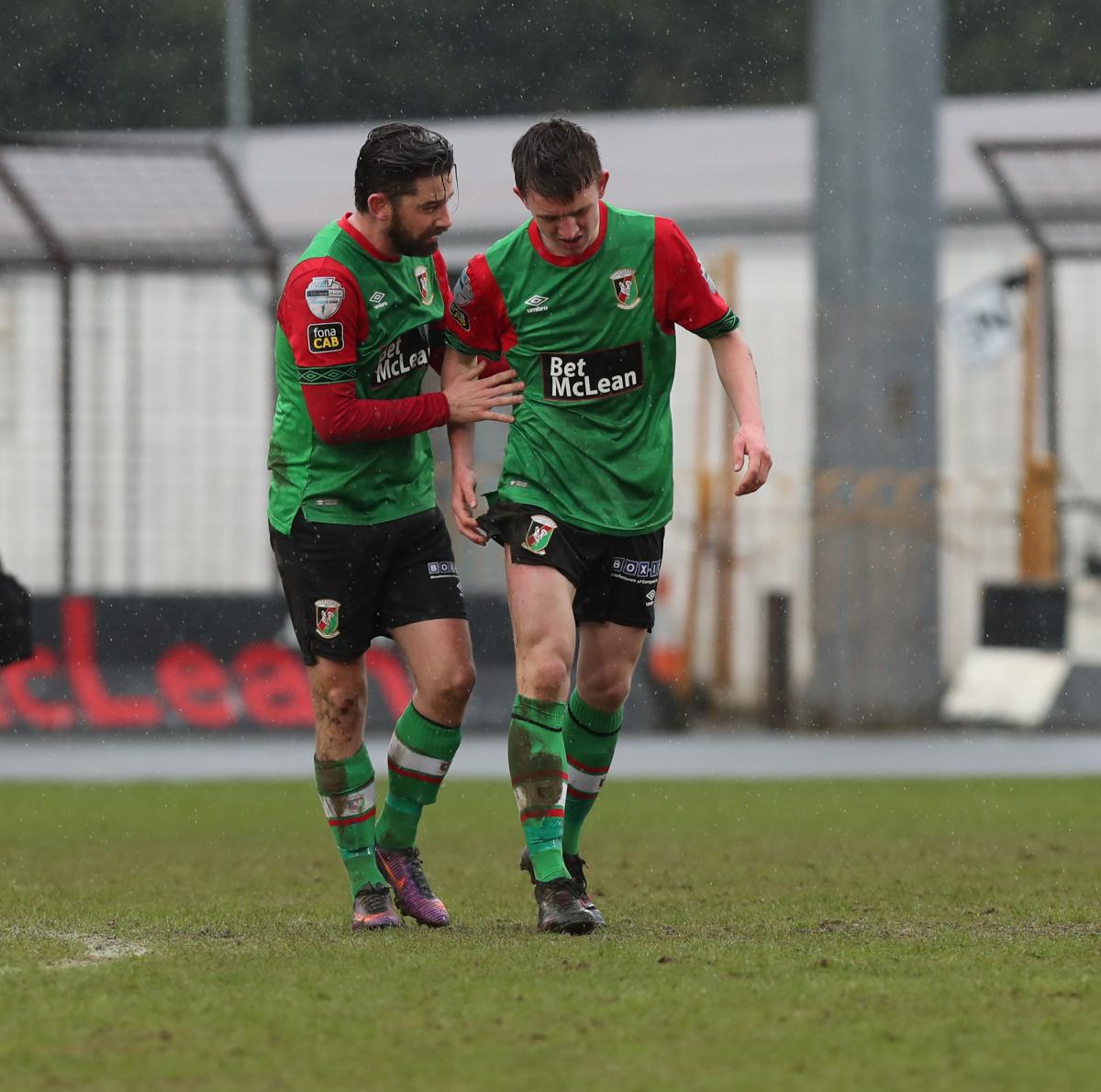 On 72 minutes though their chances of getting back into the contest when James McCarthy was shown a red card following a rash challenge on McGrory. It was a disappointing end for the young defender after he had produced an almost faultless display but having played a one-two with McDaid, McCarthy tried to reach the ball which was short of him and his lunge gave the referee a decision to make and it meant an early bath for the left back. Two minutes later Ballymena United were perhaps fortunate not to also be reduced to 10 men when a reckless high challenge saw Paul O'Neill kicked in the face. Referee Andrews deemed this only worthy of a yellow though despite O'Neill being unable to continue and having to be replaced by Steven Gordon. 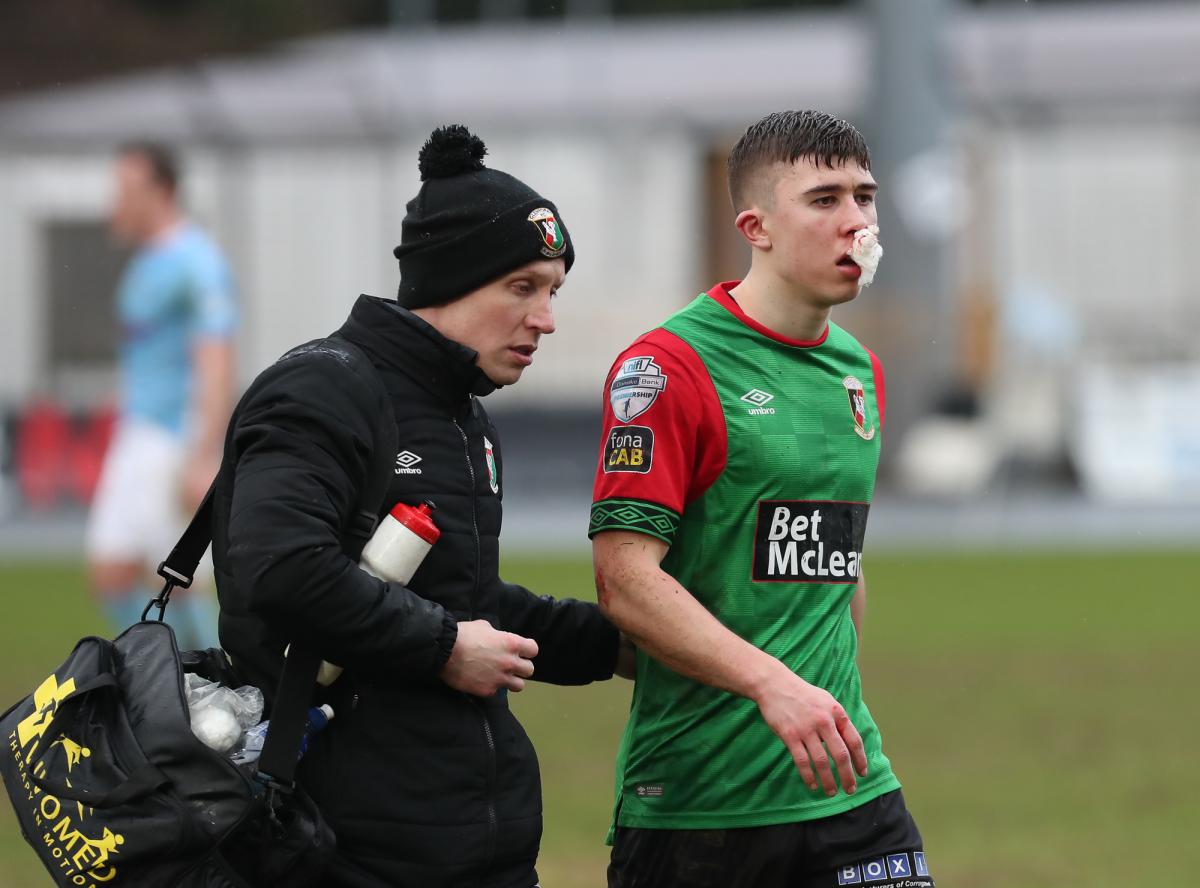 Despite the extra man the Sky Blues failed to penetrate the Glentoran back line, superbly marshalled by Peers and Kane. Deep into the five added minutes at the end of the 90, Nathan Kerr was hit late off the ball but although Andrews awarded a free kick he took no additional action. So Glentoran's battling performance brought them a deserved three points. It was a performance greatly appreciated by the travelling support and a display where it was impossible to award a 'man of the match' - quite simply a great team effort. 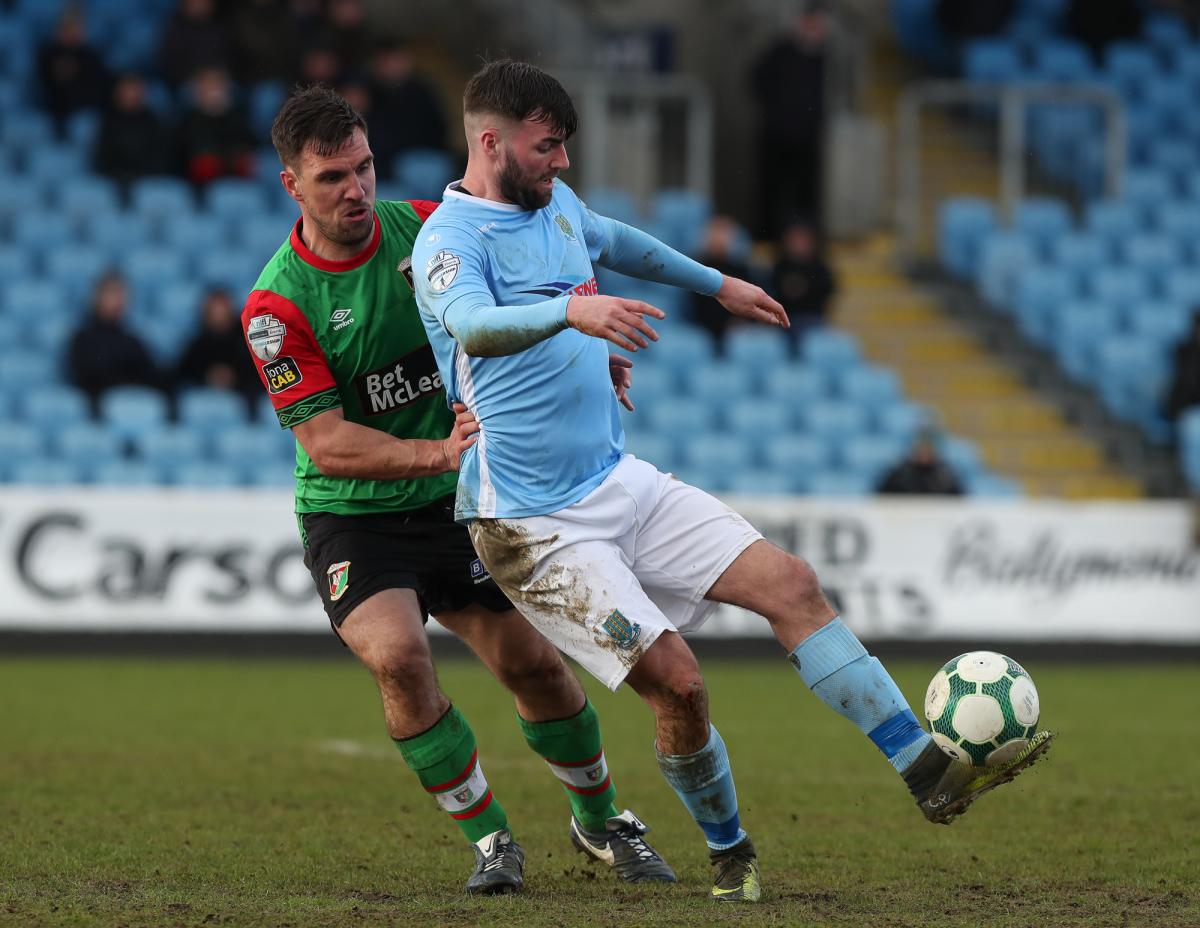 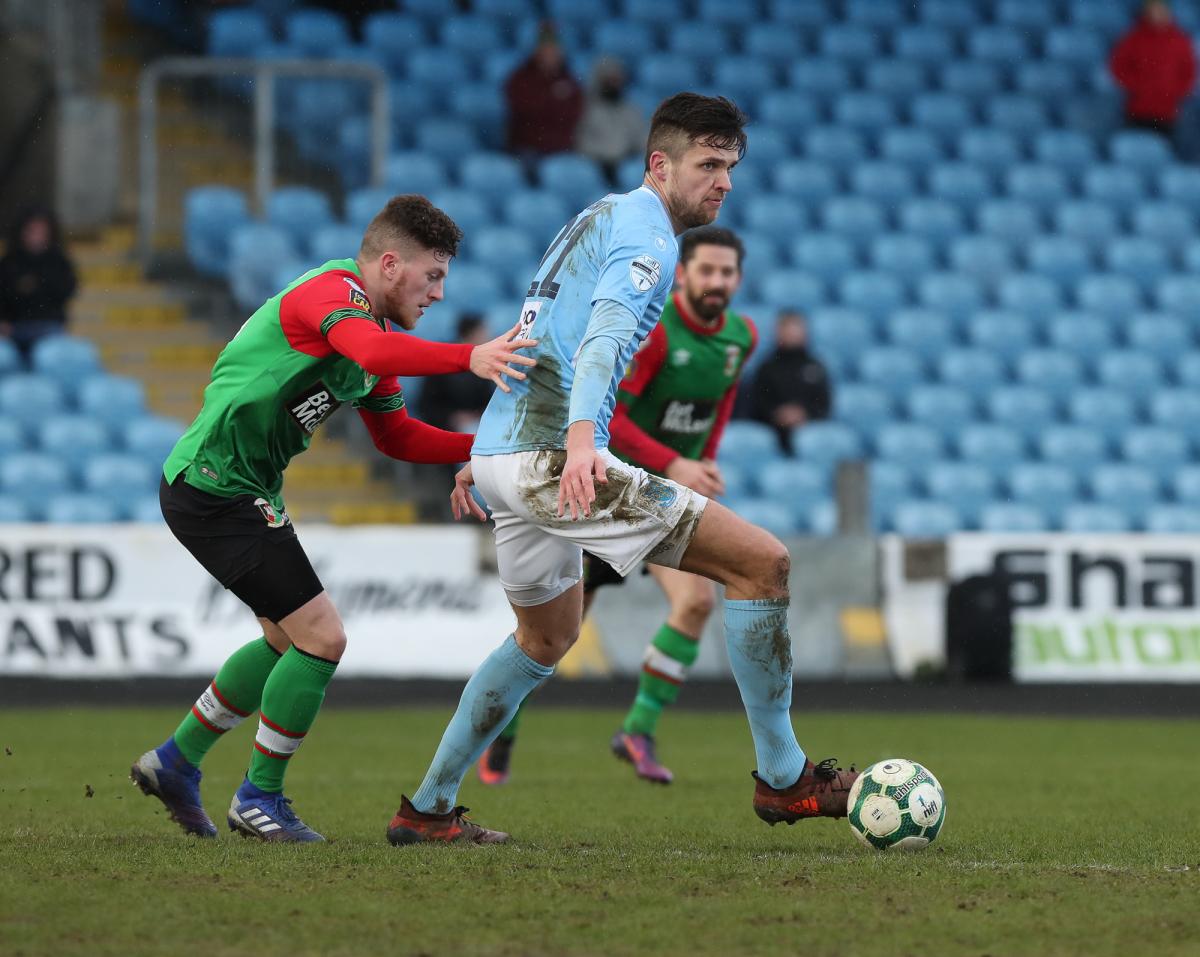 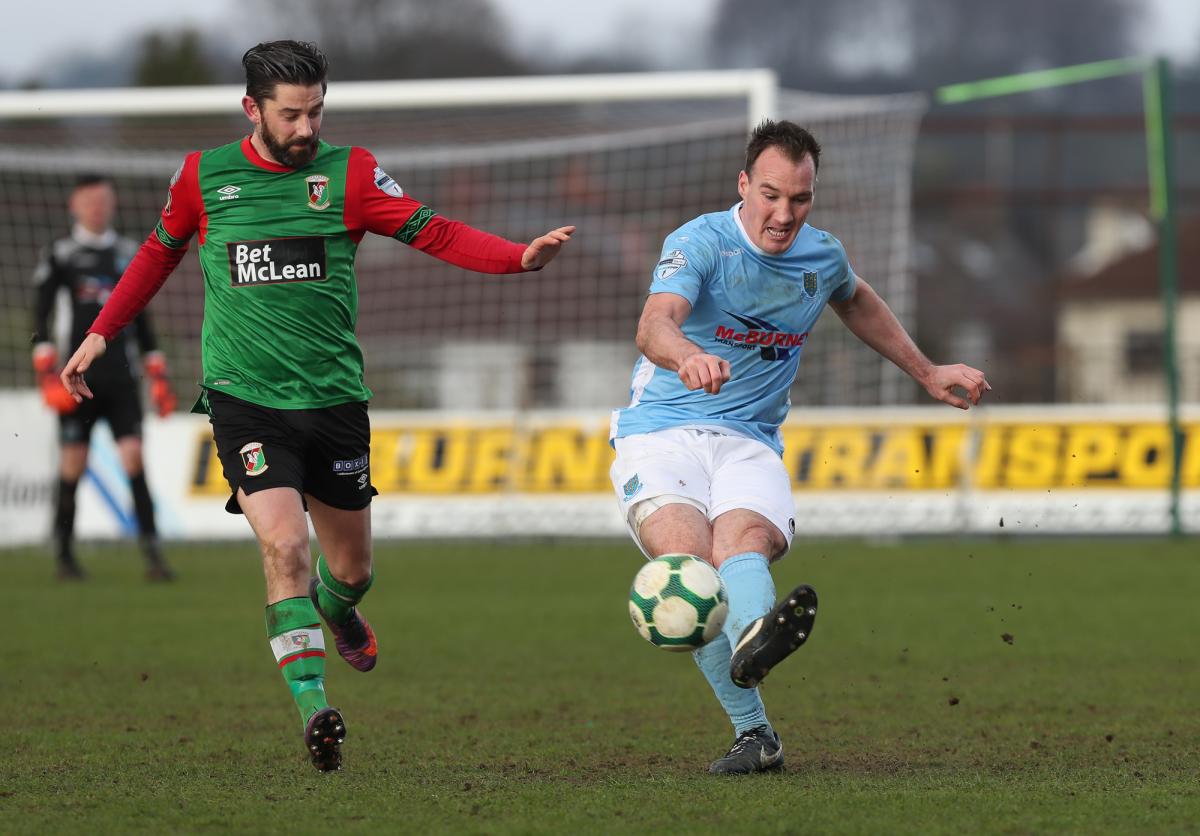