A hat-trick from Curtis Allen and a close range header from Steven Gordon gave the Glens a much needed three points at the Ballymena Showgrounds this afternoon. The result moved Glentoran to within a point of 7th placed Dungannon Swifts and the race for that Europa League play-off place is very much alive. 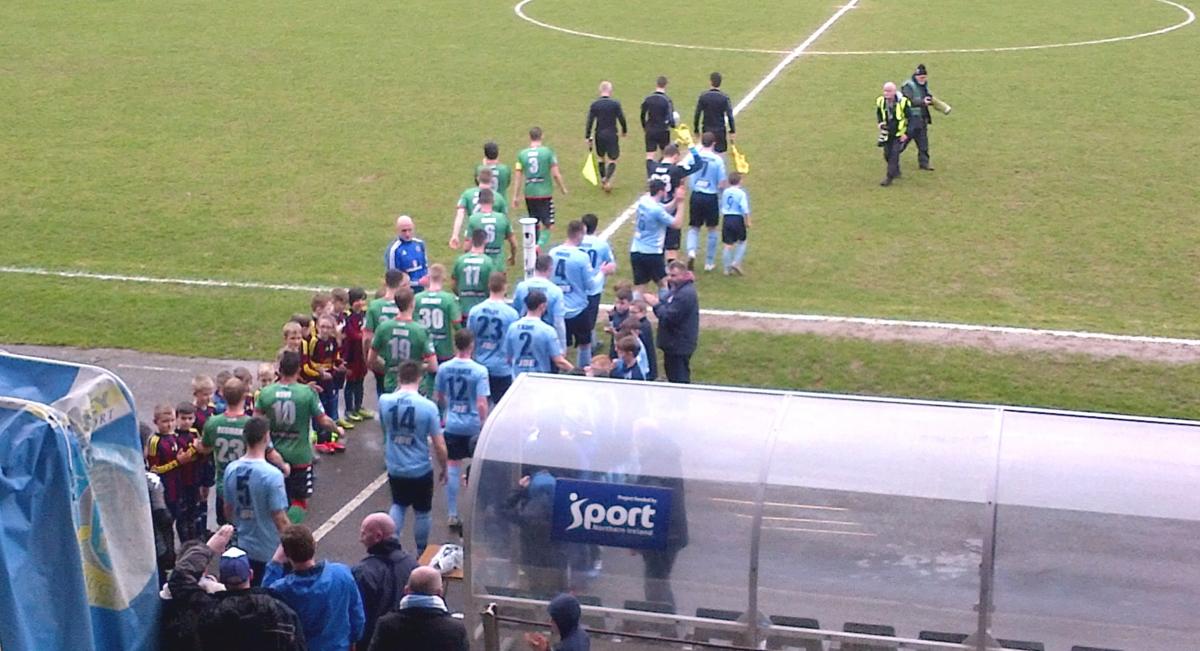 Whilst the goalkeeper and back four was the same as last week, manager, Gary Haveron changed virtually the entire midfield; only Marcus Kane retaining his place from the Coleraine defeat. Young Conal Delaney made his debut on the right with Marcus Kane replacing Chris Lavery on the left. The central partnership was Steven Gordon and Jonny Addis, Addis returning from a one match suspension and filling in for Stephen McAlorum who missed the game due to illness. In a 4-4-2 formation, Nacho Novo started up front with Curtis Allen. 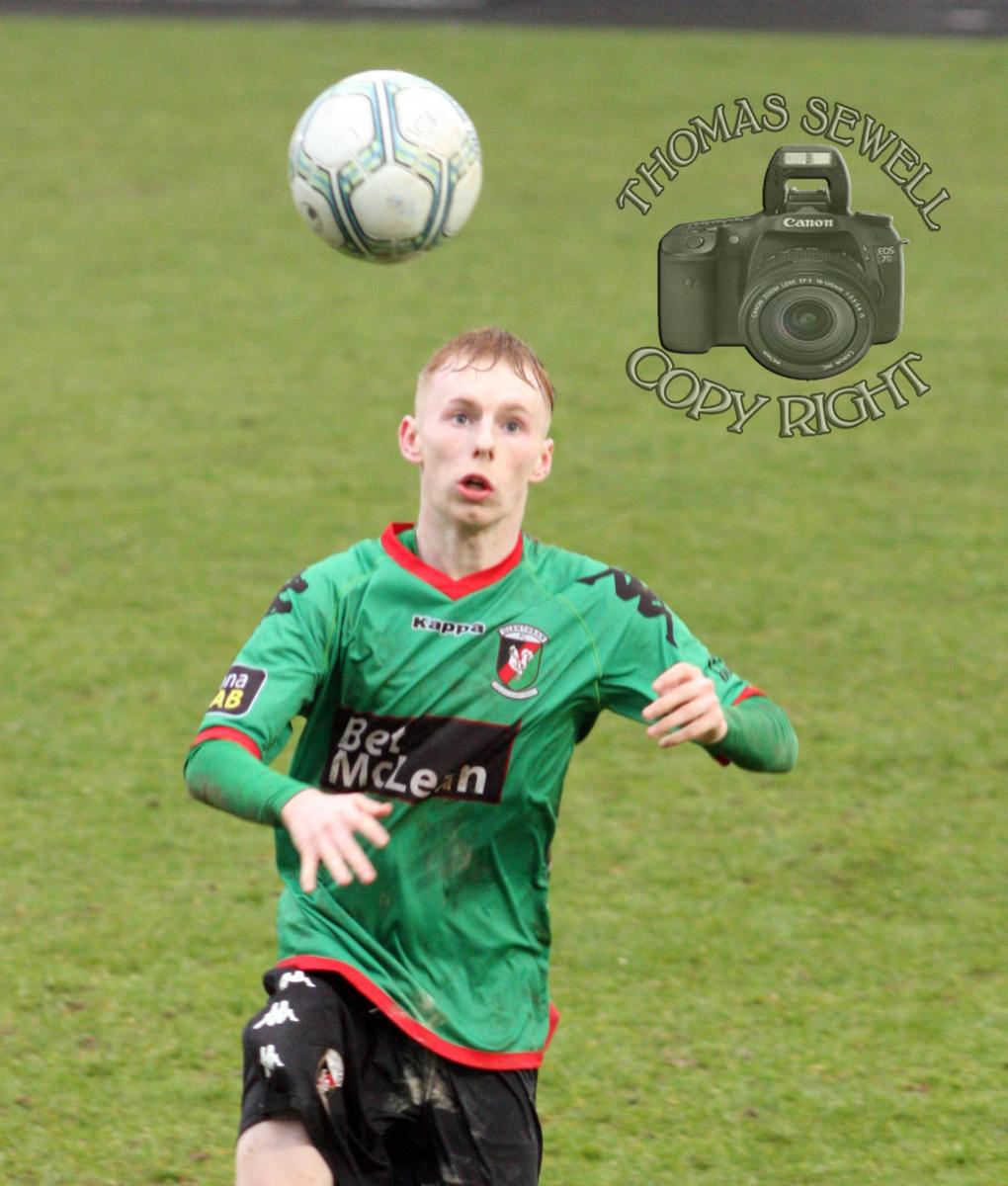 Glentoran started shakily with the home side getting a couple of early opportunities. An underhit pass from James Ferrin to Tiarnan McAuley saw United gain possession and when the ball was fired into the box Cathair Friel's shot was just inches wide of the post. A minute later the Sky Blues were awarded an indirect free kick just six yards from goal when referee Andrews harshly adjudged that Steven Gordon had passed the ball back to keeper, Elliott Morris. The Glentoran defence stood firm though and blocked Kevin Braniff's shot. Just three minutes gone and we could have been 2-nil down! We weren't though and slowly began to assert ourselves on the game. On nine minutes excellent link up play on the left involving Redman, Novo and Kane resulted in skipper Kane delivering an excellent cross. Curtis Allen got on the end of it and was unfortunate to see his header tipped onto the crossbar by Tim Allen in the home goal. Two minutes later a corner from the right, taken by Nacho Novo, was met superbly by James Ferrin but the big defender's downward header bounced over the bar with the keeper helpless.

On 21 minutes Curtis Allen again tested Tim Allen with a 25 yard effort which the keeper did well to turn away. The hungry Glens continued to press forward though and finally went in front on 29 minutes. Another Novo corner from the right was met by Steven Gordon but a United defender handled the ball and referee Andrews pointed to the spot. Up stepped Curtis Allen and the Glentoran number nine duly dispatched the ball into the bottom left hand corner of the net. Three minutes later things got even worse for the Sky Blues when they were reduced to ten men. A Tony Kane free kick had been deflected for a corner and from the resulting set piece Cathair Friel appeared to strike Marcus Kane. The referee, after consulting his assistant, brandished a red card to Friel and the home side were really up against it. Another United corner saw Kyle Owens send a header flashing towards goal but Elliott Morris saved superbly. In the run up to half-time both Steven Gordon and Curtis Allen had chances to increase Glentoran's lead whilst at the other end Kevin Braniff flashed an effort just over the crossbar. 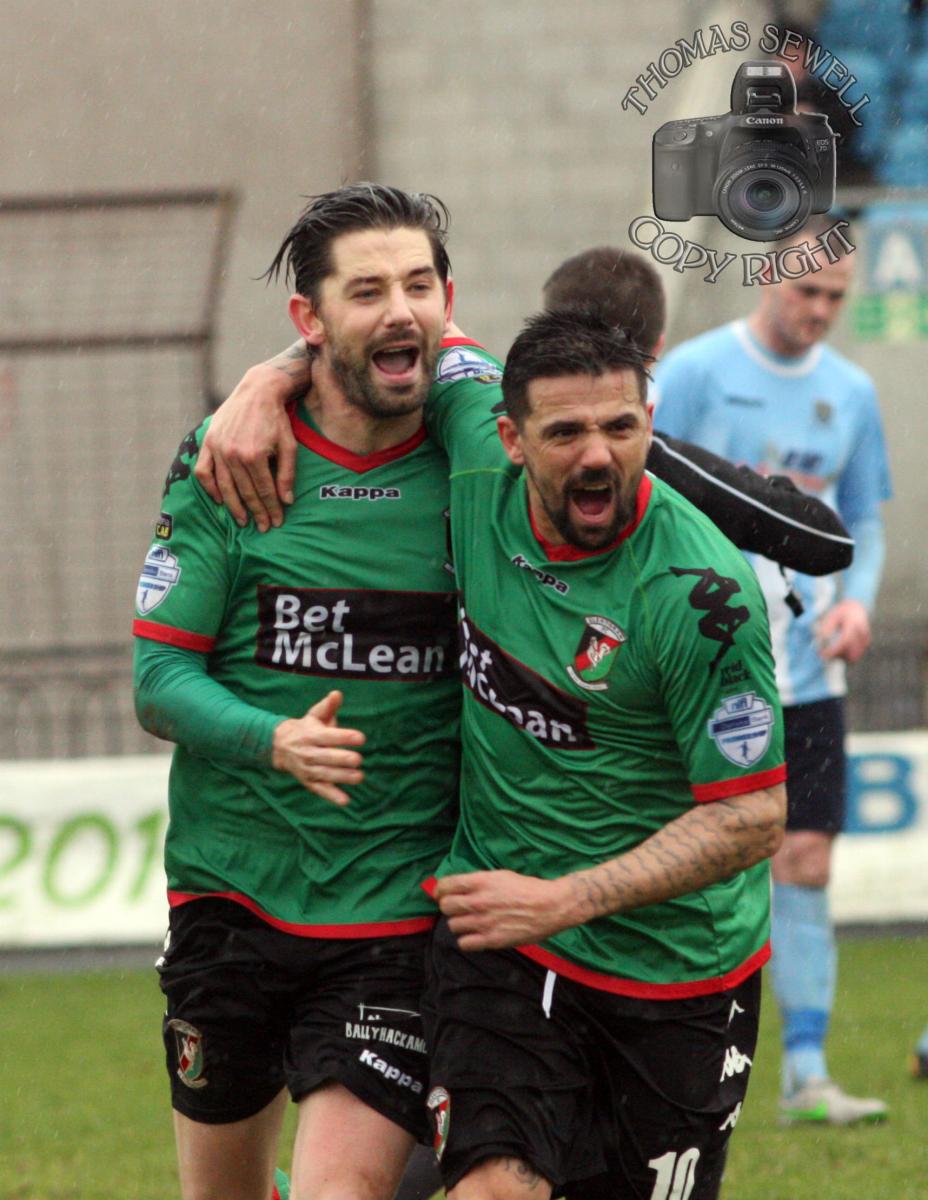 Having twice led at half-time against Ballymena United earlier in the season you felt that the Glens really needed to score the next goal in this game. It should have come on 47 minutes when Marcus Kane sent Ross Redman away down the left. Redman's excellent cross found the head of Nacho Novo but the veteran Spanish striker's header went wide of the target. Novo tried his luck from long range on 49 minutes and then on 54 he was unlucky not to get a proper connection on Magee's long ball. Ballymena United drew level on 58 minutes when Tony Kane's free kick was headed home by Jonathan Flynn. How would Glentoran react? Just four minutes later we were back in front. Jonny Addis, who had an excellent game in midfield, took a quick free kick, sending Marcus Kane clear. Kane had Redman overlapping on the left but instead opted to fire the ball in to Curtis Allen who found the bottom corner from around ten yards out. Kane and Gordon had further chances to increase Glentoran's lead but a two goal cushion was achieved on 72 minutes when Steven Gordon headed home from six yards from Nacho Novo's left wing corner. 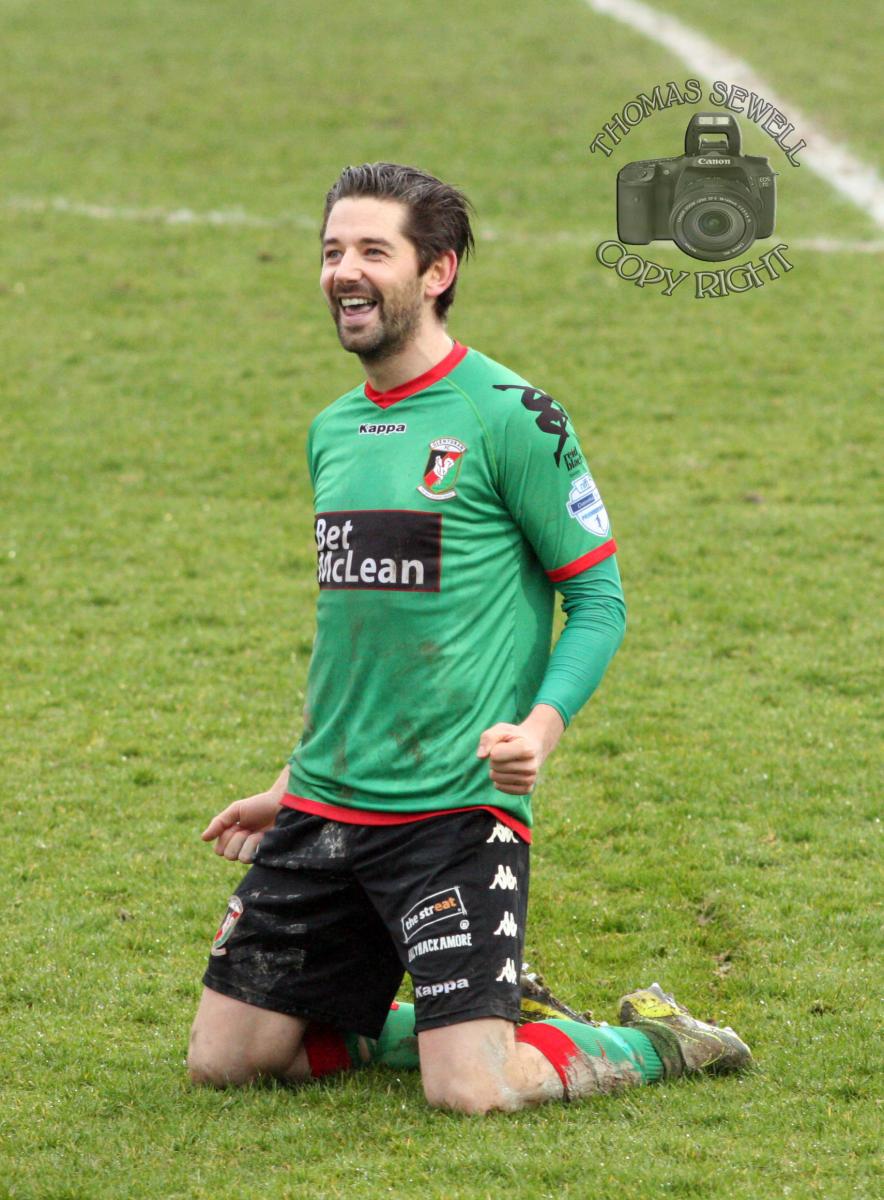 Novo then produced the pass of the game, if not the season, on 76 minutes to put Curtis Allen in on goal again. The move began back near the Glentoran goal line, Ross Redman clearing the ball to substitute Chris Lavery. Lavery found Novo and his superb ball left Curtis Allen to drill the ball beyond Tim Allen to complete a superb hat-trick. On 84 minutes Nacho Novo came close to making it five but his shot from a tight angle whistled just past the far post. Fra McCaffrey's cross found the head of fellow substitute Conor McCloskey but McCloskey's header was straight at Elliott Morris. The same pair combined again in the final minute. This time McCloskey should have scored but dragged his shot hopelessly wide of the left hand post. Steven Gordon thought he'd grabbed a second goal, turning the ball home from about a yard out but he was denied by the assistant's raised flag. In the final minute of added time a long range free kick from Tony Kane was pushed away by Morris but it ran straight to McCloskey who atoned for his earlier miss by firing the ball home to make the final score Ballymena Utd 2-4 Glentoran. 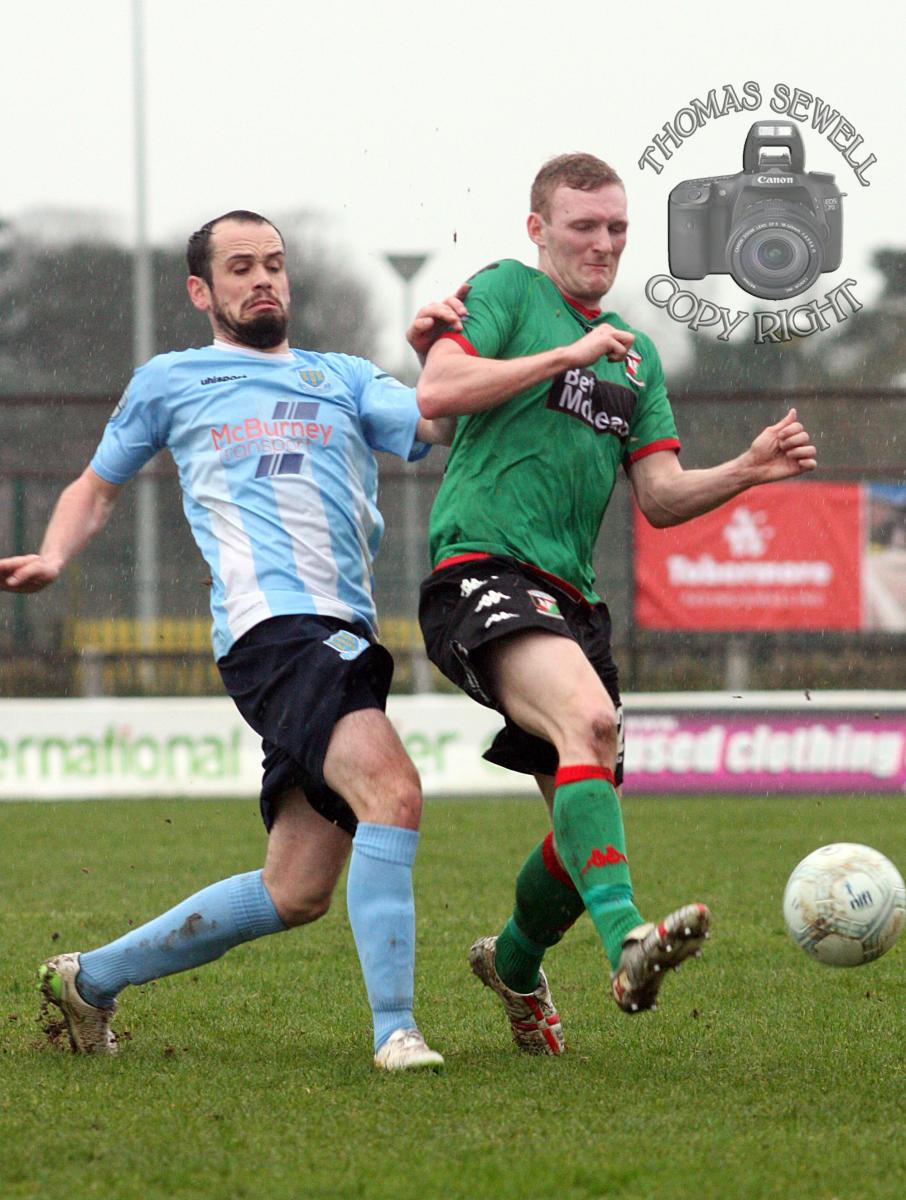