Glentoran, who took just a solitary point from their 4 meetings with Ballinamallard United last season, deservedly left Ferney Park this afternoon with all 3.

Manager, Gary Haveron was without close season signing Dan Kelly with Kelly serving a one game suspension, carried over from last season. Calum Birney and James Ferrin lined up in the centre of the defence with skipper, Marcus Kane, moving into central midfield. 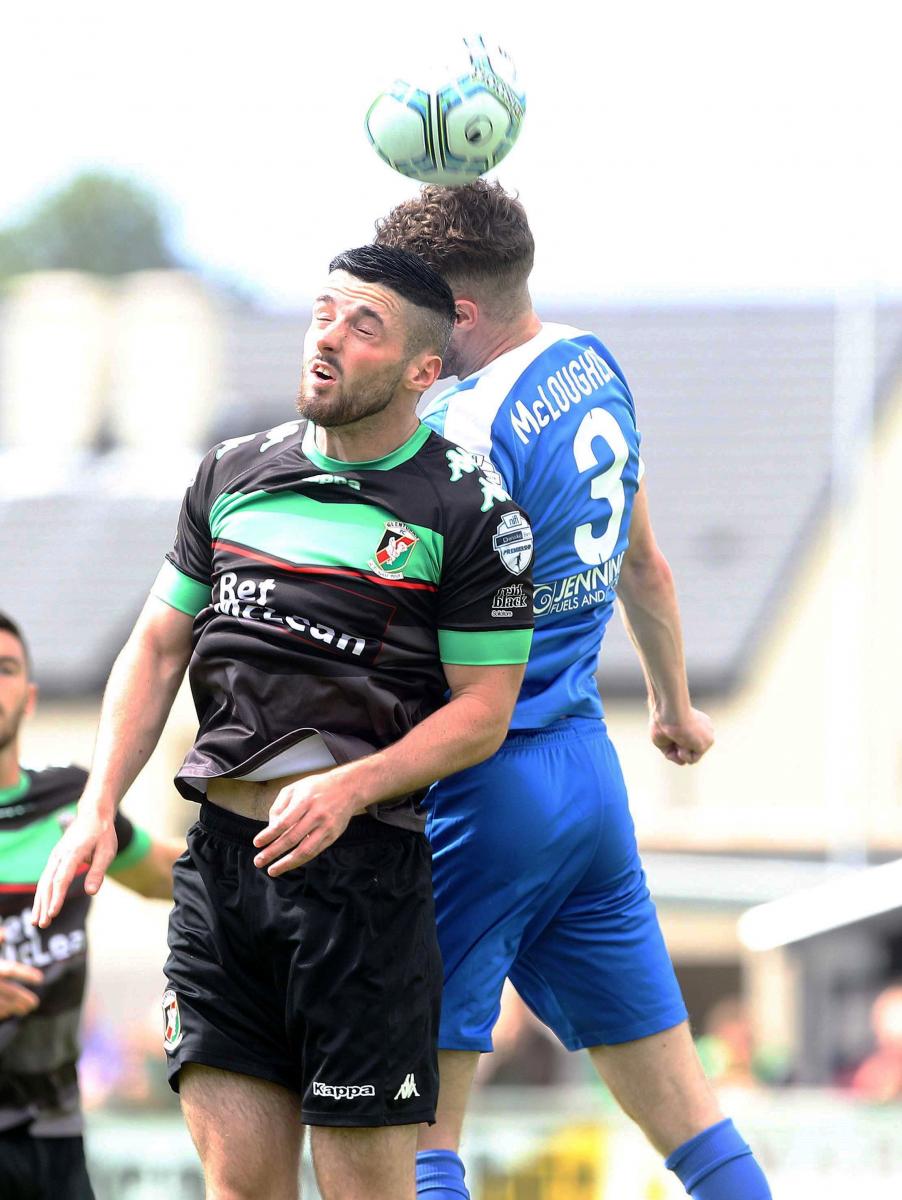 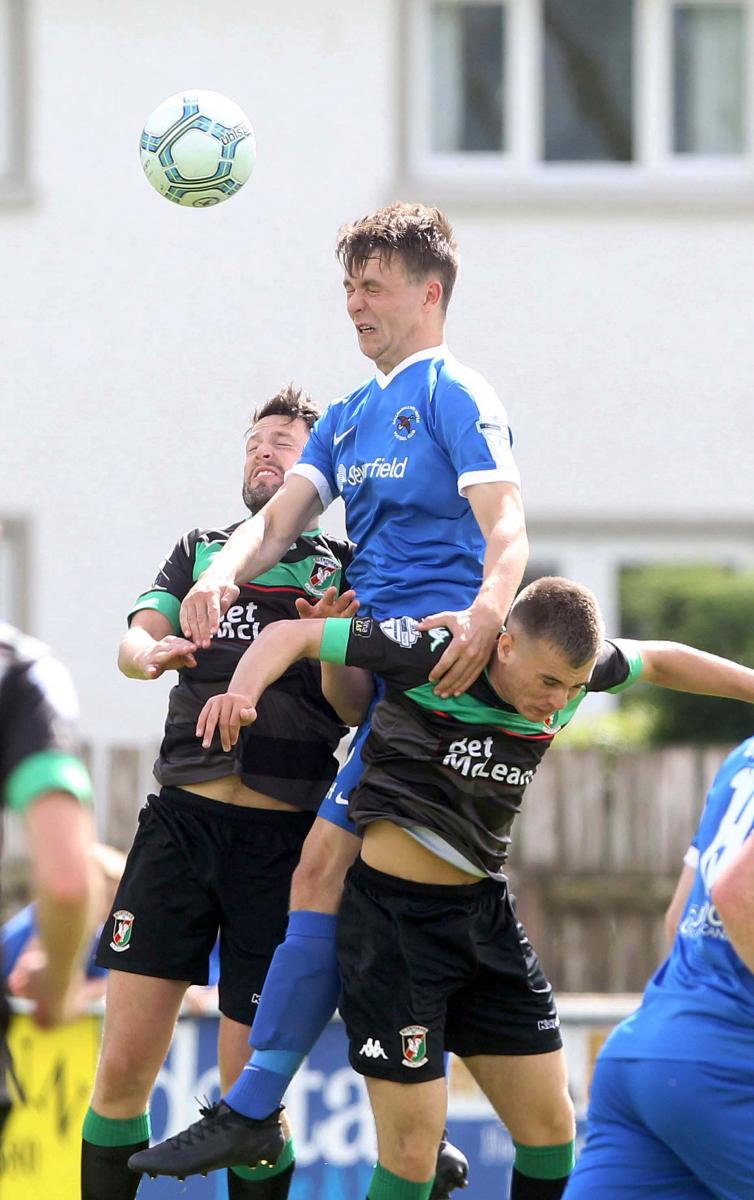 The Glens started brightly and should have been in front early on. Following Curtis Allen's 25 yard shot which went well wide of the goal, the Glentoran number 9 put John McGuigan away with just 4 minutes on the clock. McGuigan raced into the area but although his shot beat Richard Brush, it could only find the side netting. The Mallards then missed a great opportunity to open the scoring when a long ball into the Glentoran penalty area was headed down by Josh McIlwaine to Ryan Curran but the striker completely fluffed his shot. John McGuigan and Curtis Allen were linking up well and causing problems for the home defence. On the quarter hour mark McGiugan's cross was met by Allen but his header lacked power. Minutes later the same combination ended with Allen bringing a save out of Brush.

Another long diagonal ball into the Glentoran area almost led to a chance for Josh McIlwaine but his control let him down and the danger was cleared. On 24 minutes, excellent work down the left by Dylan Davidson saw the debutant whip in a dangerous cross. The fingertips of Brush took the ball away from Allen but it then fell to Tiarnan McNicholl but his shot flew over the crossbar. On the half hour mark and against the run of play Ballinamallard United went in front. A cross from the left was headed up in the air and as a number of players challenged for the ball McIlwaine went down under the challenge of Corey McMullan. Referee Steven Gregg pointed to the spot and Ryan Curran drilled the ball down the middle to put the Mallards in charge. 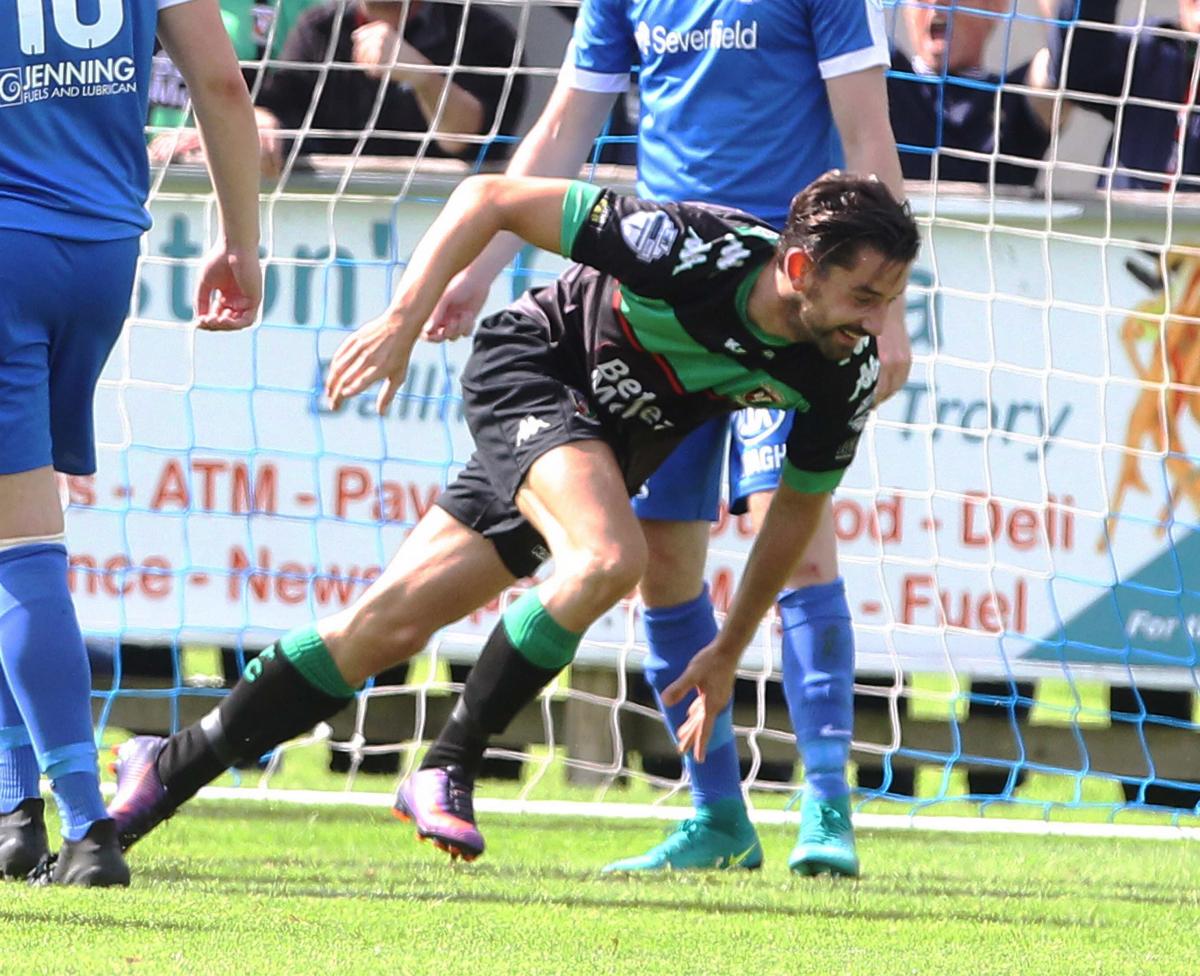 The Glentoran side of a year ago might have felt hard done by and buckled but Haveron's young team upped the pace and were level again on 38 minutes. John McGuigan's corner form the left found James Ferrin at the back post. Ferrin headed down to Allen who spun and fired home from inside the 6-yard box. The goal lifted the Glens and in the run up to half-time they kept the pressure on the home side but without adding to their tally.

A minute after the interval it really should have been 2-1. The Glens appealed in vain for a penalty after Mallards defender, Matty Smyth went right through the back of John McGuigan in the area. The ball broke to Dylan Davidson and his low drive was spilled by keeper Richard Brush into the path of Curtis Allen but with Allen looking certain to score, Colm McLaughlin denied him with an excellent challenge. 5 minutes later a poor clearance from Brush fell to Allen. Glentoran's number 9 took a touch before curling a wonderful effort inches past the far post. The Glens, in control at this stage, were almost hit with a sucker punch but Niall Brennan's 20-yard effort went narrowly over. As we approached the hour the impressive McGuigan was felled on the edge of the area. Tiarnan McNicholl took the free kick and it was scrambled around the post by the Mallards' keeper. From the resulting corner Calum Birney was unlucky to see his goal bound header cleared off the line. 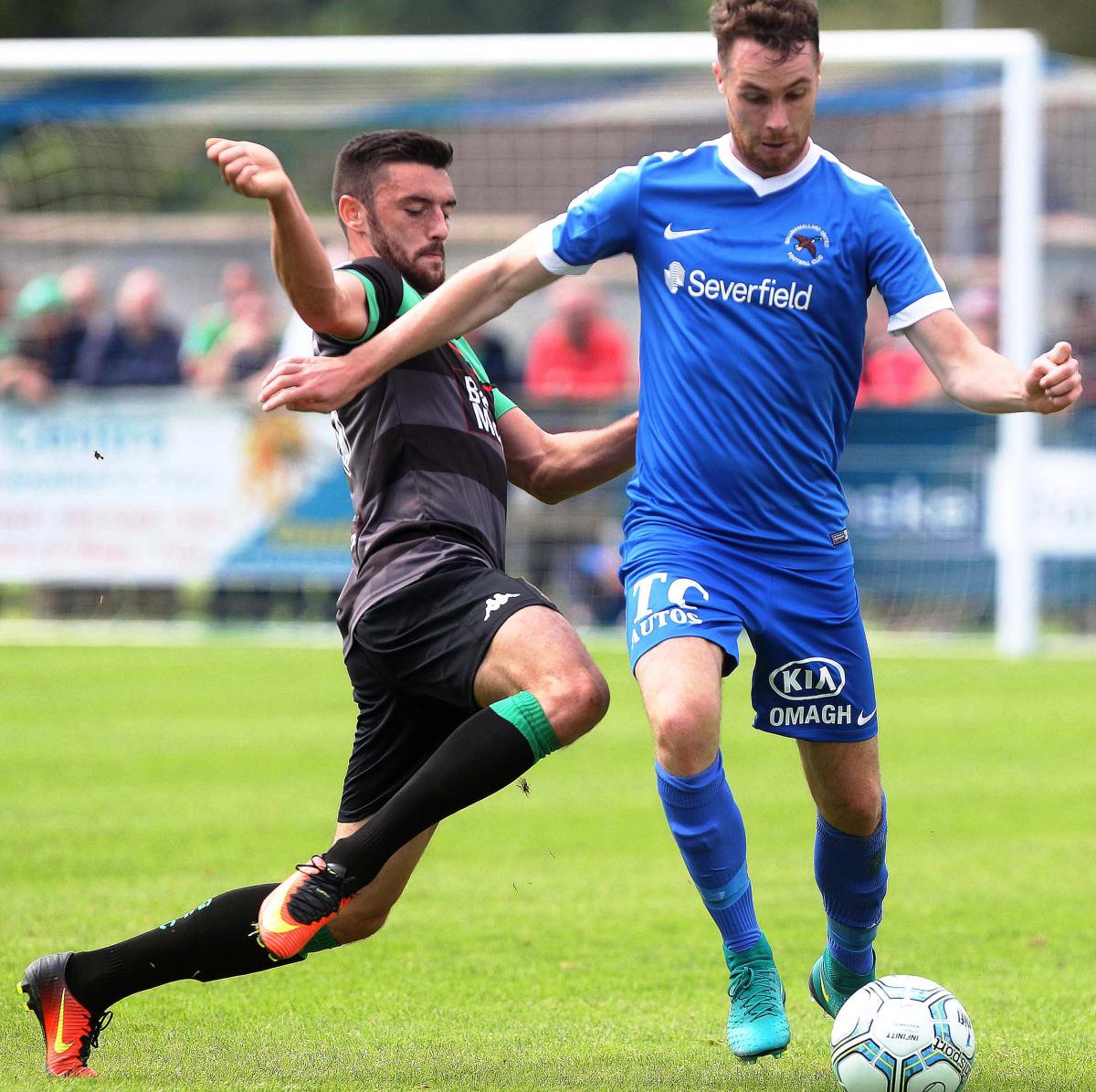 On 68 minutes we saw one of the best moves of the game with Redman, McGuigan and Allen all linking up before Ross Redman's cross was turned behind for a corner. From this set piece James Ferrin almost scored, his header just clearing the crossbar. Conall Delaney replaced Tiarnan McNicholl on 75 minutes as the dominant Glens pushed for a winner. McGuigan was inches away with a superb effort on 78 minutes and then on 82 his drilled cross was almost met by the inrushing Allen. 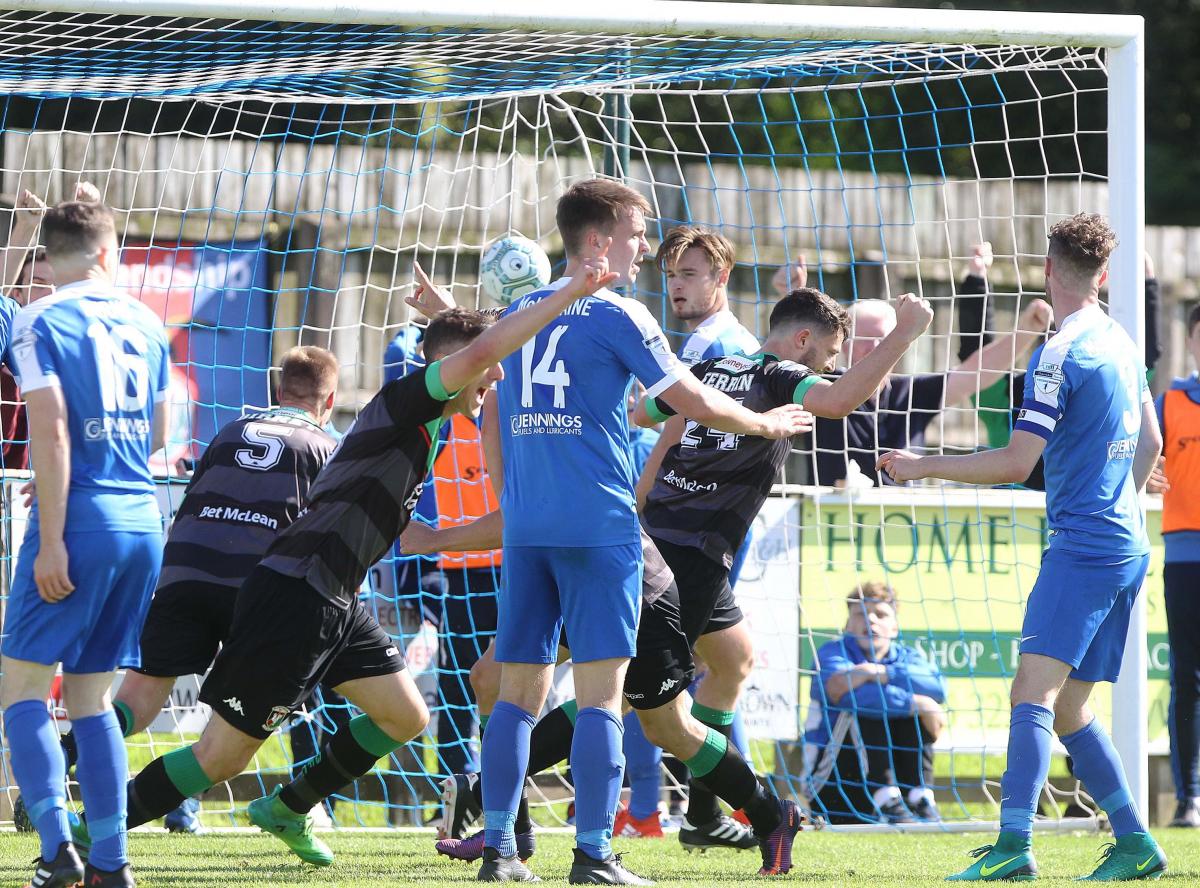 With just 2 minutes remaining the winner finally arrived! Again both McGuigan and Allen were involved with the former's left wing corner being touched home by Allen. The Ballinamallard United defenders were convinced that Allen had used his hand to put the ball in but referee Gregg was unmoved. On 90 minutes Conall Delaney made a superb interception and put Allen in again. With hindsight Allen will know that he should have squared the ball to the unmarked McGuigan but few strikers on a hattrick don't want to go home with the match ball! Allen took a little too long to get his shot away and it was blocked by a United defender. Deep into stoppage time Delaney brought another good save out of Brush. A third goal would have given the scoreline a more realistic look but in the end it was a controversial one which clinched the vital 3 points. 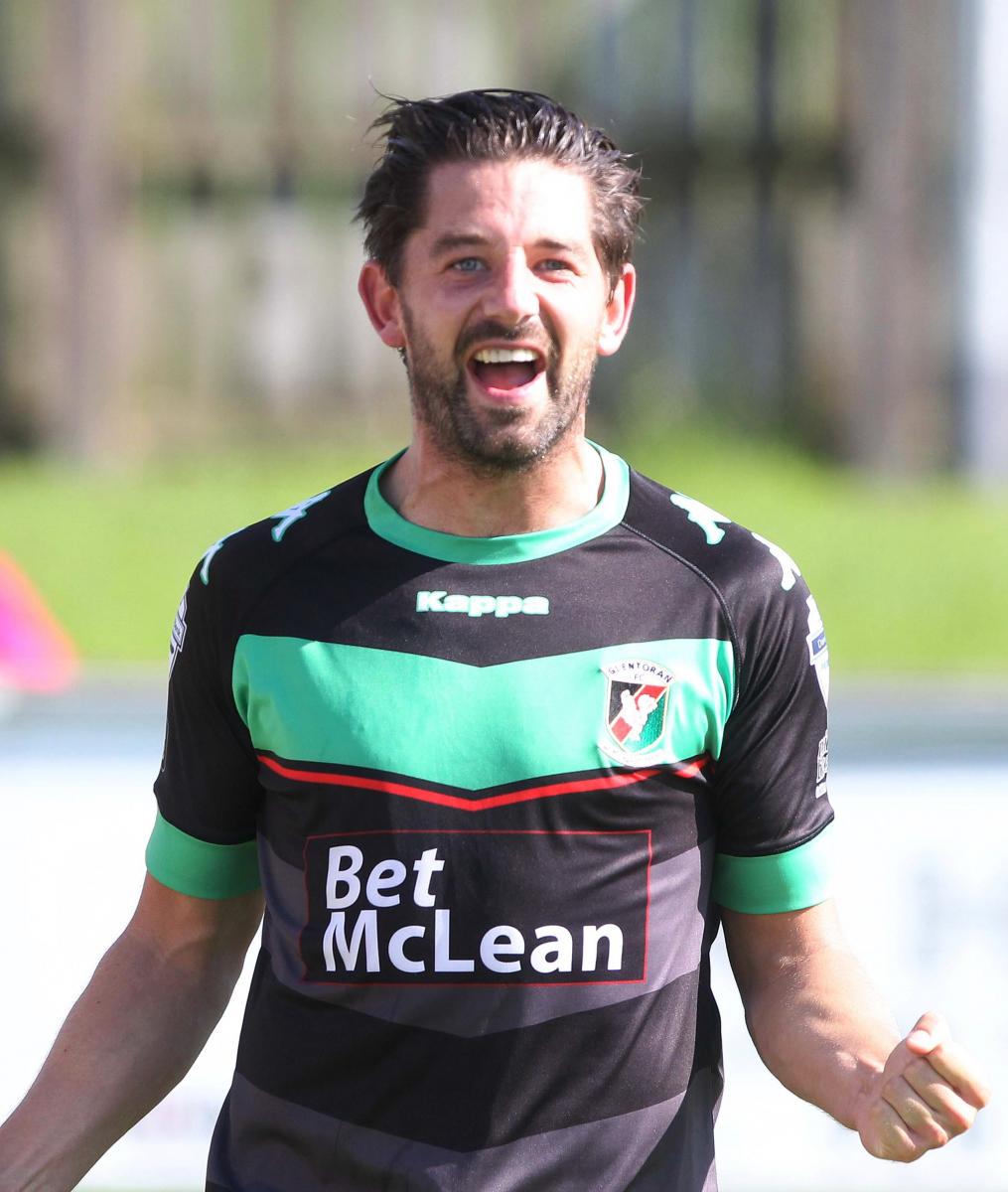 Next up for the Glens is a home Danske Bank Premiership game against Dungannon Swifts. That fixture is on Tuesday night at the Oval with a 7:45pm kick off.