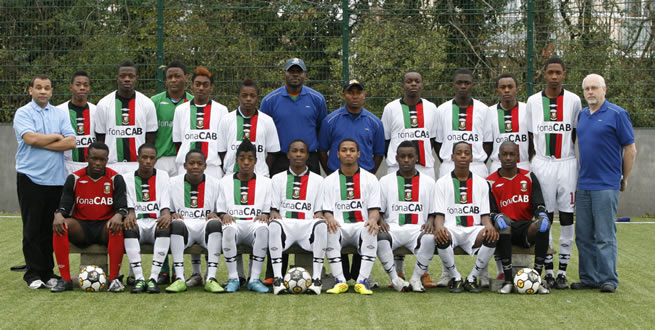 Glentoran Football Club strengthened its unique bond with the Insaka Academy in Dublin by providing their Under 17 squad with last season’s Reserve Team Kit.

The Insaka Academy U17 squad will wear the Glentoran Kit as they compete in their first season in the North Dublin Soccer League and they will be hoping to emulate the Senior Insaka squad who won the NDSL Senior League and Cup last season at their first attempt.

The Insaka Academy is an intercultural football club based in Dublin made up mainly of players from the African Diaspora and other migrant nations. The Club aims to successfully manage young footballers and integrate them into society through the power of sport.

Glentoran Football Club has developed a unique partnership with the Insaka Academy with the Glentoran Academy providing kits and training gear, and participating in a number of prestigious friendly matches. A number of the Senior Insaka squad have also been invited to participate in trial sessions at the club.

The Glentoran Academy and Insaka Academy U17 squad’s recently participated in an innovative ‘United Through Sport’ educational workshop and exhibition match aimed at promoting social inclusion and cultural integration through sport.

Ken McCue, International Officer for Sport Against Racism in Ireland and co-founder of the Insaka-Glentoran Academy, said: “We would like to thank Glentoran, and in particular Stephen Lowry and Jim Morgan from the Reserves, for their generosity in supplying our U17 Squad with a Glentoran kit for this season’s league campaign.

“The partnership with Glentoran has provided the Insaka Academy with a tremendous boost and it has built up a real affiliation for Glentoran amongst all our players, and we look forward to further developing our relationship with the Belfast club.”