Cup in the Community 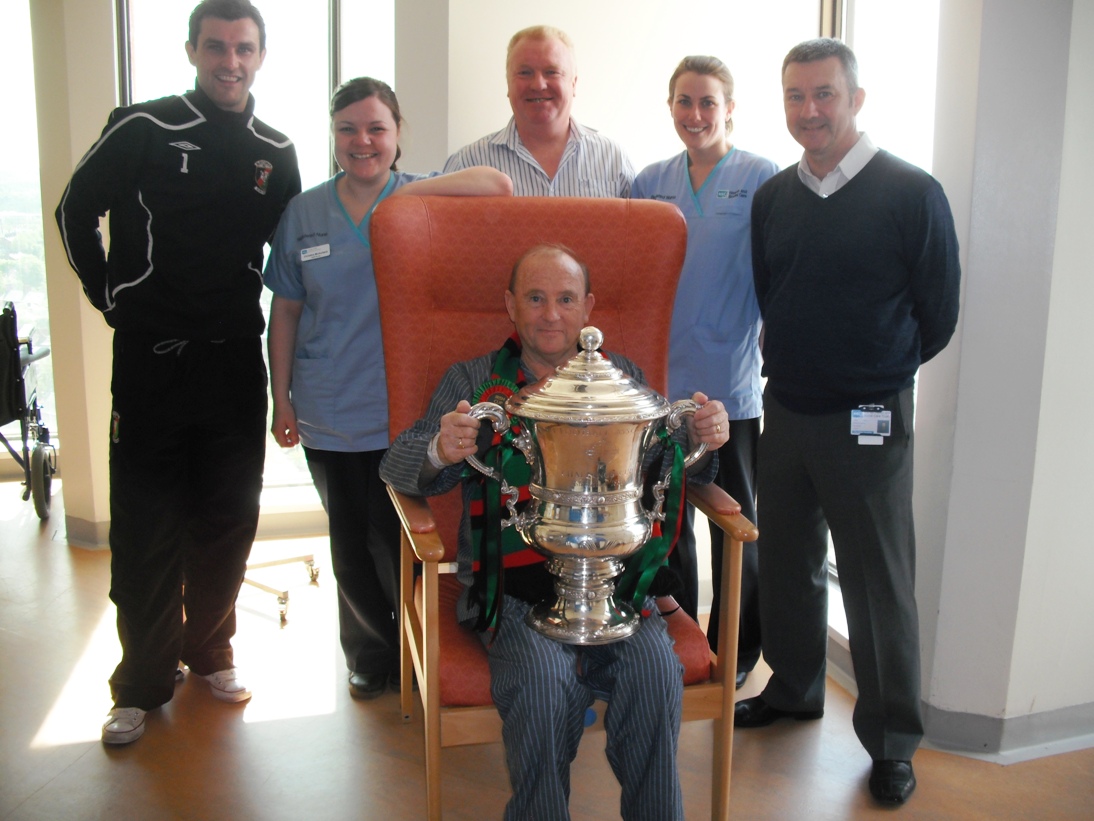 “You are no longer suitable for transplant.” A devastating statement for someone to hear from their consultant but that’s exactly what Michael was told in July 2012.

Michael had kidney problems since the late 70’s but in 1981 was fortunate to get a transplant. The new kidney changed his life and for the next 18 years he was able to live a reasonably normal life; getting married, having children and continuing his job. For a transplant recipient though there are always issues. A person’s body will fight to reject the new organ and this internal battle needs to be managed by increasing and/or changing medication. In the late 90’s Michael’s situation deteriorated to the extent that the medication was doing him harm and the kidney he’d received had to be removed.

A long and often difficult road followed. A strict diet, a limit of 500ml (small bottle of coca-cola size) of fluid per day and the need to attend hospital for dialysis three times a week (Monday, Wednesday and Friday from 2pm – 6.30pm) became the norm for Michael. And it wasn’t like he could miss one of those sessions. Well he could but the consequences would be extremely serious, if not fatal.

Throughout all this time Michael lived in hope of a transplant; another new kidney from someone who had registered as an organ donor. Someone who wanted to give a fellow human being the chance of a better life. 1999 became 2000 and then as the years ticked by we were into 2009. A decade had past. No kidney! You have to be strong to go through something like this; really strong. You need dedication too. Your life is literally in your own hands. 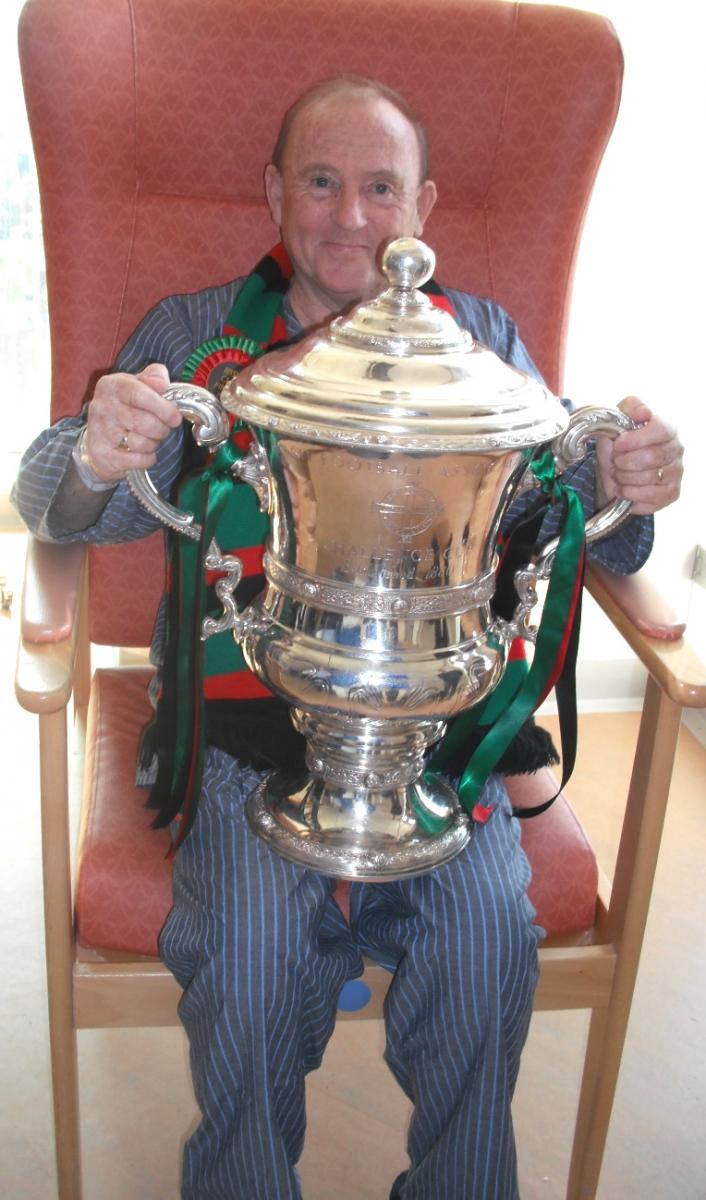 Football can be a great release for people. It can take you away from your problems, even if it is for only 90 minutes. Your mind is focussed on the game and everything else is forgotten. As well as working alongside Michael in Ordnance Survey, our sons played for Boyland FC in East Belfast. In the early 90’s I introduced them to Glentoran and they became season ticket holders. Cup finals, League titles, winning and losing – all shared together.

Back to July 2012 though and Michael hearing those words from the consultant; “No longer suitable for transplant.”  Why? All the medication Michael had been on had messed up his body. There were too many anti-bodies in his system and whilst he could be ‘cleaned’ it would take too long. A kidney needs to be transplanted into the recipient within 24 hours. Cleansing the anti-bodies would take much longer.

All hope gone? Was the rest of Michael’s life going to be this long and difficult regime? Well actually there was one other possibility – a live donor. There are around 70+ live organ donations in Northern Ireland each year, with the most famous one covered in the local media being the Joe Brolly / Shane Finnegan story (http://www.bbc.co.uk/news/uk-northern-ireland-19955914 ). When Michael broke the news to his family they all volunteered to be tested for suitability. Two of Michael’s sons, Cain and Damien were a good match. Cain was 23 years old and Damien 19. The medical experts decided that although Damien’s match may have been slightly better, they opted to use one of Cain’s kidneys.

There were numerous tests and meetings to go through before the operation could take place. I accompanied Michael to one of those meetings. Apart from work we had another link. My mother was also in the City Hospital Renal Unit in the late 70’s at the same time as Michael awaiting a kidney transplant. Things didn’t work out for her though and she died aged 48. It was emotional to return there and meet one of the nurses who had treated both her and Michael. The date of the meeting was 24th January; her birthday. I just knew that this was all going to work out ok. The transplant was scheduled for 22nd February 2013. Michael took ill though and it had to be postponed. It was rescheduled for 22nd March. Again there were problems and it was called off. Michael and Cain were given a new date and understandably they didn’t want to share it. There had been too many disappointments.

In late April I was talking to him on Facebook. He was asking what I was up to. I replied, “Getting measured up for my cup final suit!” “This will be the first cup final I’ll have missed since I started following Glentoran.”  I made him a promise there and then. “If we win the cup, I’ll bring it to you.” The transplant took place on Monday 29th April 2013, the start of cup final week. I visited Michael a few days later on the top floor of the City Hospital Tower Block. “Look out that window” he said. There was Windsor Park and between the stands you could see a section of the central area of the pitch.

On cup final day Michael had the match on the TV in his room. He’s also a pair of binoculars to view from the window. We spoke about an hour before kick-off. I’d picked a spot where I thought he could see me. We all know how the game panned out. I’d now a promise to keep. 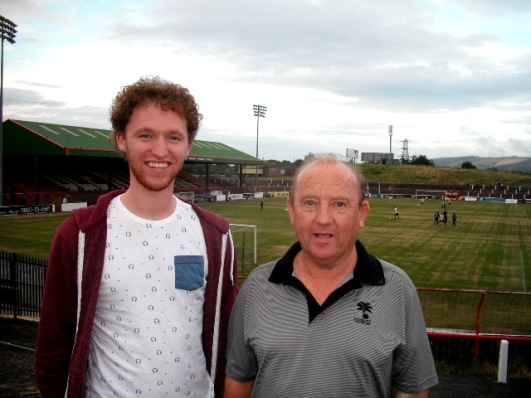 Both Michael and Cain made fantastic progress. Cain went home after a few days but Michael needed to be monitored for a while longer. He contacted me one Wednesday. “I’m getting home on Friday.” A couple of quick telephone calls and a dash to the Oval boardroom to get the cup. On Friday 24th May I arrived at the City Hospital, accompanied by Eddie Patterson and Elliott Morris.....and of course the Irish Cup.

With Michael’s immune system being weak he wasn’t allowed to go into crowds for a number of months. He did make it to the Oval though for the pre-season friendly against Liverpool U21’s, watching the game from his car parked beside the Control Room at the City End. He’s managed to get along to a couple of other games too, including the quarter-final defeat to Glenavon in this season’s Irish Cup. He’d really like another trip to Windsor Park for a final but it’ll have to wait at least another year. Life has changed dramatically for Michael and to have an organ donated by one of your own sons was a very special event; literally a life saving gesture. The past month has seen him retire from work and welcome his first grandchild into the world.........another Michael.