It was honours even at Windsor Park this afternoon in a game of few chances and with both sides finishing with ten men.  The tone was set for a niggly game when referee Arnold Hunter issued the first yellow card of the afternoon to Mark Clarke after just six minutes.

Linfield had the better of the early exchanges and in the opening quarter of an hour Billy Joe Burns and Matthew Tipton had shots well blocked by Stephen McAlorum and Jimmy Callacher respectively, while Michael Carvill curled a twenty yard free kick just wide.  The Glens finally carved out an opening on twenty seven minutes which turned out to be the visitors’ best chance of the game.  A flick on from Jonny Addis saw Stephen McAlorum run clear of the Linfield defence and, just as he was being closed down, slipped the ball through to Jim O’Hanlon.  The winger was left unmarked just inside the Linfield box but his shot lacked conviction and Linfield ‘keeper Jonathan Tuffey was able to save comfortably.  A couple of minutes later Linfield came even closer to taking the lead as Mark McAllister out-muscled Jimmy Callacher in the Glentoran box.  His clipped shot over Elliott Morris looked to be heading into the corner of the net but the ball came back off the post and Calum Birney was on hand to clear. 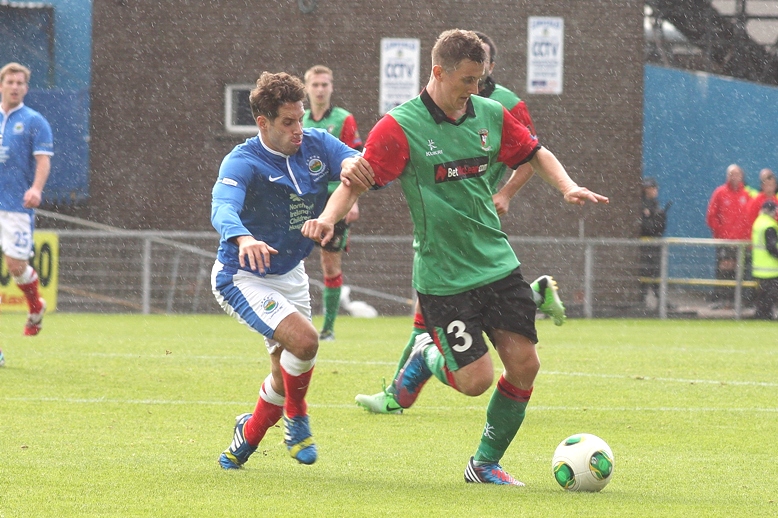 The complexion of the game changed on thirty one minutes.  As Linfield prepared to take a throw in Ryan O’Neill went down in his own area, seemingly after an off the ball incident with Aaron Burns.  Referee Hunter, or one of his assistants, had spotted the infringement and he issued a straight red card.  While Burns was keen to stay and continue the argument there appeared to be few complaints from his colleagues as they ushered him off the pitch.  Unfortunately the Glens were unable to capitalise on their numerical advantage and only had a Jimmy Callacher free kick, which was comfortably dealt with by Tuffey, to show for their efforts.  Indeed Linfield could well have gone in at half time a goal to the good when Niall Quinn’s free kick brought a great save from Morris in the final minute of the half.

The second half continued in similar vein with neither ‘keeper overly stretched but the home side creating a few half chances, Tipton, Mulgrew and Quinn all having shots comfortably dealt with by Morris.  Linfield’s most dangerous weapon seemed to be the corners delivered by Quinn from the right and midway through the half one of these evaded the defenders, came off Kyle McVey and back off the post.  With sixteen minutes left the Glens went down to ten men.  Jason Hill upended Michael Carvill as he made his way into the Glentoran box and, having received a yellow card earlier in the half, he was shown his second yellow and resulting red. 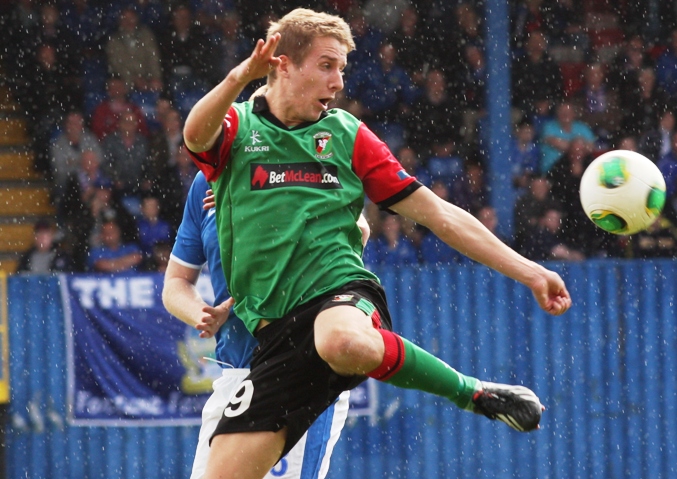 Despite being back on equal terms the Glens then seemed to get a greater foothold on the game.  Five minutes after Hill’s sending off a crisply timed McAlorum tackle sent Richard Clarke, on as a half time substitute for his namesake Mark, on a run towards goal and his shot from twenty yards brought a flying save from Tuffey.  This proved to be the visitors’ last effort of any note but things could have been a lot worse as Linfield should have clinched the three points in the final minute.  Niall Quinn was sent clear in acres of space and with only Morris to beat but skewed his shot into the side netting, much to the relief of the supporters in the North Stand.

So the Glens remain undefeated but, with bottom of the table Linfield a man down for a large part of the game, it’s really a case of two points lost and manager Eddie Patterson will be looking for a much improved performance for the visit of Ards on Tuesday evening.