Philip Stevenson has been named Glentoran SuperFan 2018/19 at an NI Football League awards ceremony this week at the National Stadium at Windsor Park.

From being a supporter of Glentoran since primary school days, to being a ball boy in the early 1980s, Philip Stevenson has also been a member of the Glentoran Supporters Committee (1923) – helping produce the award-winning matchday programme for the past 33 years as a contributor and editor.

Since the formation of the Glentoran Legends football team in 2008, Philip has helped organise friendly matches, raising funds for charities and other worthwhile causes. In 2015, he wrote an excellent biography on Glentoran legend John Colrain, with all profits going to the British Heart Foundation. Philip even manages to find time to pour tea for any fan who feels the cold on winter match days!

This evening a delighted Philip gave his reaction to the award and told his story to www.glentoran.com

“I’m genuinely humbled by this unexpected award. All volunteers at Glentoran just do the work for our club without looking for any return so that makes this so gratifying, though the term “superfan” is hard to take as there are so many people at the Oval who’ve done just as much as me and they all could’ve won it. It was very humbling at the presentation to see a young lad from Newry City who is disabled and goes with his mum every week, and a lad with autism who’s really just discovering football. I never thought I’d get an award just for doing work for the Glens. I’d like to thank Roy Downes who nominated me.

Glentoran means so much to me. My two-year-old grandson Ethan was brought to the Oval on my fiftieth birthday when he was two weeks old and is the fifth generation of Stevenson at the Oval and I met my wife Karen when she was secretary of the Raven GSC and also of the Amalgamation of GSCs. Just as well I was a Glenman as her Dad made it clear to her, he wouldn’t let her bring a Blueman into the house!

I would like to thank everyone who called me or sent me such touching messages of congratulations. I’ve had messages from as far afield as Glens seventies legend Victor Moreland in the USA and from former Irish League players Billy Millen and Gerry Clarke in Australia. Most touching was from my old friend Jimmy Carter on behalf of the 1923.”

Philip was brought to the Oval by his father as a small boy and the first game he remembers was the home leg against Brann Bergen during our legendary European Cup Winners Cup run in 1973/74. His first involvement with the club came when he joined the ball boy team in the unbeaten championship season 1980-81. 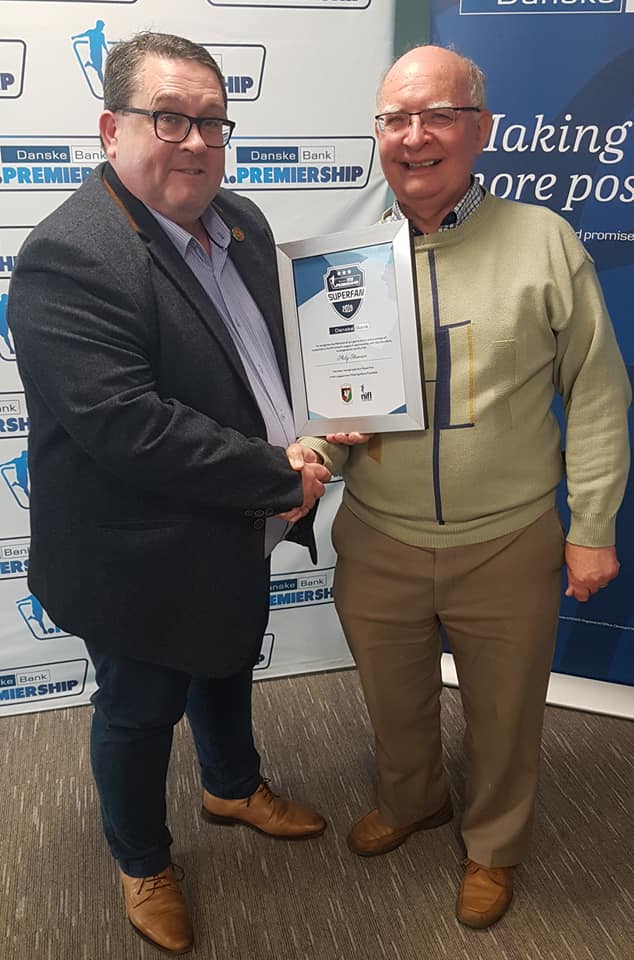 Philip and Roy Downes, who nominated him for the award

Philip is probably best known for his 33-year association with the Glentoran Gazette through his membership of the Glentoran Supporters Committee (1923). He joined the Gazette team in 1986 as a contributor, eventually succeeding Sam Robinson for a nine-year stint as editor. It was during his term as editor that the Gazette won the first of its so far unbroken run of nineteen years as the Northern Ireland Programme of the Year. As Philip says: “Nobody retires from the Gazette. Even over the past few years when we’ve been poor on the pitch, Blanch, Ian and I still love seeing the same people coming through the turnstiles week after week. Some of my best laughs over the years have been with the people who are now my friends while I’ve been selling Gazettes.”

Among his roles at the club were a stint helping with the seconds under Johnny Jamison and George Bowden – a seconds team that included Jason Hill, Sean Ward, Jamie Mulgrew and Andy Waterworth plus other lads who made it to the first team such as Conor Walsh and Damian McLaughlin. He and Karen were also regular members of Benefit Committees for players such as Alan Paterson, Jim Cleary (Philip’s favourite player), Barney Bowers, Billy Caskey, Terry Moore, Andy Mathieson, Justin McBride and John Devine. It was through his involvement in benefits that he took on the role of manager of the Glentoran Legends team, a role he still proudly occupies with the stellar squad that raises so money for charities and deserving causes across East Belfast and Northern Ireland.

Philip also took time a few years ago to write an excellent and very highly reviewed biography of the great John Colrain and has two more Glentoran related books well underway which he will finish if Glentoran and his family ever give him the time off.

Congratulations Philip. Someone who sets the benchmark for all of us Glentoran supporters. 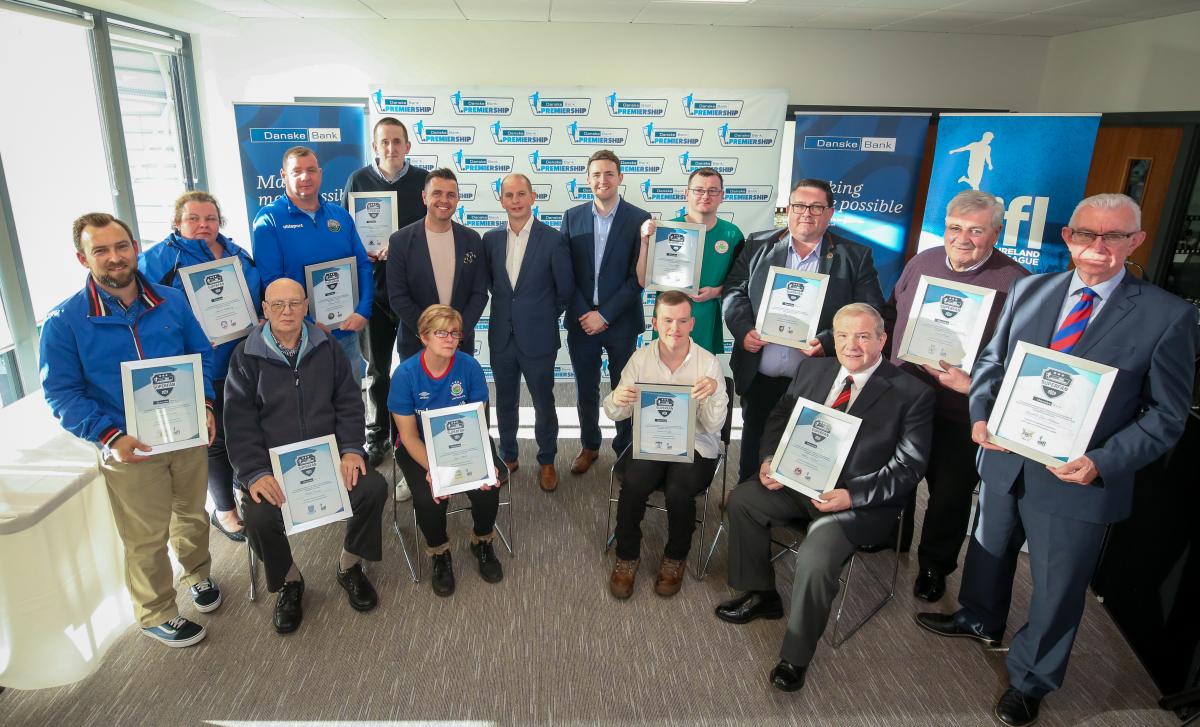