This is the fourth in a new weekly series we intend to highlight local – predominantly East Belfast – artists to help bring their music to a new audience through www.glentoran,com. If you can think of anyone deserving of this support and coverage please email media@glentoran.com and we will do our best to cover them.

Belfast-based Chillwave producer, David Ferris, aka Balcony Sunrise weaves together the two timelines of the 1980s and modern day to create a nostalgic yet hopeful experience for his listeners.

On January 22nd, he released his debut single, “Velvet Ocean” to rave reviews. The track got placed in Chordblossom's 'Fresh New Music from Northern Ireland' playlist on Spotify alongside some reputable artists such as Bicep, Joshua Burnside and Hannah Peel. It also got featured and was given shout outs in The Jumble Magazine, Stranger Dais and Yeo Magazine. The single began gaining attention in parts of America after uploading the track to SoundCloud which then led to getting featured on retrowave YouTube channels, 'Definition of Chill' and 'Electric Osmosis'. It even got a reaction video from Youtuber Jonathan Belle, who played 'Velvet Ocean' whilst driving his car through the snowy town of Bennington, Vermont.

Leading up to the release, 'Velvet Ocean' received its first review from Forged In Neon, which praised the track and described it as a 'beautiful song from a new artist on the block. We could all do with a little more chill and this track has it in spades.' The single also gained its first airplay on Nightride FM, an internet radio station based in Australia that is extremely popular within the synthwave community, with Ollie Wride (The Midnight) championing the station. 'Velvet Ocean' has since had placement in some notable Spotify Playlists such as Synthwave|Chillwave and Nostalgic Synthwave/Dreampop.

This track was inspired by the limitations of lockdown and using nature as an escape from the anxieties caused by the pandemic.

David says ‘Creating music is a real healer for me and so during lockdown, I got lost in the world of music production and created many demos during that time. As we all know, it’s quite an intense time at the moment, and so I wanted to make music to help relax not only myself but anyone who listens to it. Taking trips to the coastal areas around Northern Ireland played a big part in what inspired this track. There’s just something about looking out towards the sea and hearing the waves crashing, it’s very comforting during times like these. I also get a sense of hope when I’m by the sea and so that’s why I decided to name my first track ‘Velvet Ocean’. I wanted to imitate the meditating sounds of the ocean waves and so I tried to emulate that by using side-chained synth pads and a lot of white noise throughout the track.’

Produced in his bedroom studio, the nostalgic single ‘Velvet Ocean’ by Balcony Sunrise is now available on all major platforms!

You can find out more about the Balcony Sunrise on 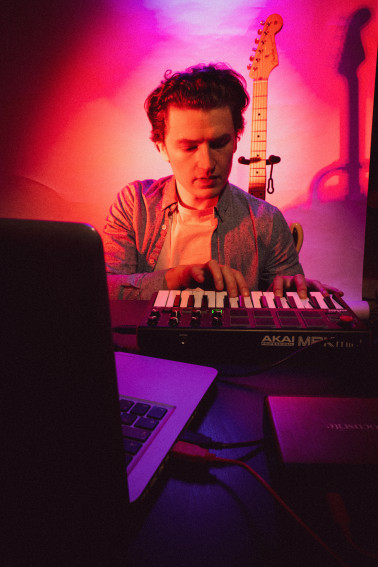