William and Glenn Kitchen from 1st Newtownards GSC present Conor and Robbie with their awards.

Before Saturday’s home win over Larne, 1st Newtownards Glentoran Supporters’ Club made an on-pitch presentation to Conor Pepper, the club’s Player of the Year for 2018-19, and Robbie McDaid, Young Player of the Year.

Chairman of the 1st Newtownards GSC, William Kitchen, said of the award winners:  "It's a great honour for 1st Newtownards to be able to award Conor our player of the year in his first season with the team. His impact is clear to see in every game he plays, both in terms of his effort & quality, but perhaps even moreso in terms of the impact he has on his teammates. He was the overwhelming choice of our membership, and fully deserves all the praise every fan bestows on him.

Robbie was also rightly chosen as our young player, and we're so pleased to be able to reward in some small way Robbie's undoubted commitment to the Glens. In every game he plays, his passion is remarkable; and this often spurs others on to give more. He's the type of player every fan loves, and we are so pleased to show our appreciation to him as a supporters' club.

As a supporters' club, like all others, we have quite a knack of picking true Glentoran greats for our awards. Since our formation in 82-83, some Glentoran stalwarts have won our trophy, like Bowers, Morrison, Caskey, McCartney, Little, Young, Walker, Nixon, Leeman. These names are the cornerstones of our great club. Here's hoping that Conor & Robbie follow in those very formidable footsteps. Congratulations to both”.

A very pleased Conor Pepper told www.glentoran.com : “I’m delighted to win the award obviously. After such a long time out to get so many games in first and foremost I was delighted, so to be given this award I’m very grateful. Everyone was great with me settling in and I’m hoping to follow it up with another good year with everything that is going on. Thanks again for anyone who voted. Your support means a lot.” 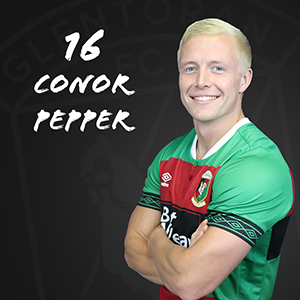