McDaid is January Player of the Month

Robbie McDaid, our top scorer so far this season, has won the supporter vote as Glentoran Player of The Month for January.

The ever popular Robbie, who scored twice in four appearances in a month where we won five of our six matches and went top of the league at this stage for the first time in a decade,  won 47% of the vote, Second was Hrvoje Plum, with  Cricky Gallagher, Paul O’Neill and Jonny Frazer polling well.

Robbie said on being told of his win: “It’s great to be voted player of the month for January, I would just like to thank everyone for their votes and also their support so far this season. January was another good month for the team and hopefully we can keep our good run of form going over the next couple of months for the end of season run in. The support has been immense all season and the fans have been the 12th man in many of our games and we as a squad will need that support more than ever with the exciting games over the next couple of weeks

Mick McDermott said of the vote: “It’s good to see Robbie win this award. As well as scoring so well for us so far this season, he’s a great presence in training and his work rate and enthusiasm rubs off on his teammates. We were delighted to get him tied down on a contract extension earlier in the season.” 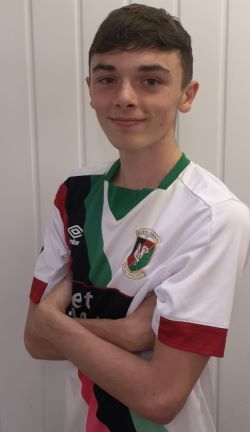 Glentoran U20 Player of the Month is Seamus Duffy

U20s Manager David Lowry: “Seamus has been getting better and better as the weeks go by this season as he is growing into this level. Seamus turns 17 next week and is still very young for the reserve team level but is now showing maturity beyond his years with his development as he is adding game intelligence to his precocious talent.

Seamus was man of the match in our game away to Larne where he was creator in chief in our 4-1 and he was also at his productive best in our 3-0 win over Institute. Seamus currently leads the way with most assists for the 20s this season so far”.