On Friday we look to return to winning ways with the visit of eighth placed Carrick Rangers to the Oval in the Danske Bank Premiership.

We have played and beaten Rangers twice so far this season, firstly in October at home, when two goals from Robbie McDaid and one from Hrvoje Plum gave us a 3-1 home win. In December we played a very tight match at the Belfast Loughshore Arena, with the teams only separated by a second half goal from Navid Nasseri.

Carrick, managed by Niall Currie, have confounded early season predictions to currently and deservedly sit fifteen points away from the relegation playoff spot and have surely done enough to consolidate their position in the top division. In recent weeks they have had good wins over Cliftonville and David Jeffrey’s floundering Ballymena United, and were considered unlucky to lose ten days ago against the Reds. In the January window they lost their highly rated forward Stewart Nixon to Coleraine and Gillaume Keke to Dungannon Swifts but replaced them with the loan signings of Alex Gawne from Coleraine and of course, Darren Murray from ourselves.

Carrick have a strong contingent of former Glentoran players in their squad, With Kyle Cherry, Lee Chapman and Daniel Kelly likely to feature on Friday. Aaron Hogg sustained a serious injury a few weeks ago, James Ferrin has been injured since our match in December, whole Darren Murray is clearly unavailable as a loan player. Both Chapman and Cherry were scorers in last week’s 2-0 win at Ballymena Showgrounds. 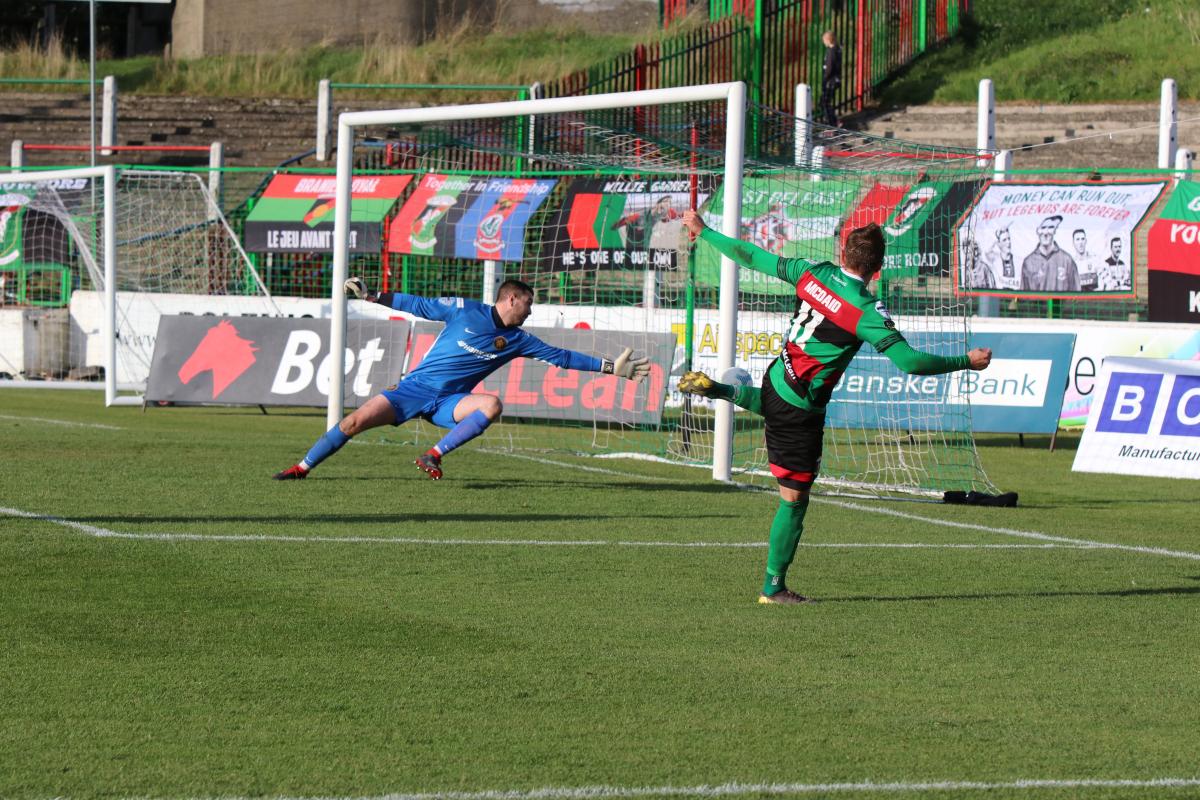 Mick McDermott: “It’s good to be back playing and to get the chance to put in a better performance than we did against Coleraine. We didn’t play well but, in those conditions, neither did they, particularly. I don’t think we adapted well enough to the conditions but even so it was always going to be a goal like that – totally influenced by the wind – that was going to settle the match. Unfortunately, it didn’t go our way.

I’ve said since I got here that the performance is what I’ll always focus on as the result should take care of itself. That will be very important over the next few weeks. We’ve got ourselves into a good position in the league and with eight matches left in the league we’ll see all the other top teams take points off each other so it’s the teams that put together the most consistently high level of performance who will be in there competing at the finish, Our players all understand that and I know our ever growing support will be loudly behind us from now until the end of the season.

Carrick tomorrow night will give us a game. There’s no doubt about that.  They’ll be up for it after a very good win against Ballymena last Saturday and proved in December that they’ve got a squad of players who deserve to be taken seriously any time we play them. But our players know what’s expected of them after a couple of performances that fell a bit below the standards we’ve set ourselves over the past few months.

Apart from the two long term guys, Hrvoje and Cameron. We’ve the full squad available for this one. Ruaidhri Donnelly is healthy and available after tweaking his back in training last Thursday. He was really looking forward to making his debut against Coleraine and we were looking forward to seeing him. But he woke up on the Friday morning and he'd tweaked his back, but he’s raring to go now.”

We offer expert car repair and car servicing across all makes and models, as well as MOT testing, diagnostics and 24-hour breakdown services. At Mosgrove & Sons we provide the best possible quality service in MOT prep, servicing, brakes, timing belts and clutches.  We also have the most up to date diagnostic equipment.  Roadside recovery, puncture repairs and tyre fitting are also available.