The Managers: Ronnie McFall (part one)

We’re currently running a number of articles here reflecting on great Glentoran players of the recent and not so recent past. But what of the managers? We’ve had our fair share of very diverse characters in charge of football affairs over the past forty years or so but while we get nostalgic about our favourite players, its very easy to forget the men who brought them to the Oval or who led them to their greatest successes or heartbreak. This new series by Ian Clarke will look back on a few of the most notable managers of the recent past and will get the managers’ own viewpoint and memories on their tenure. 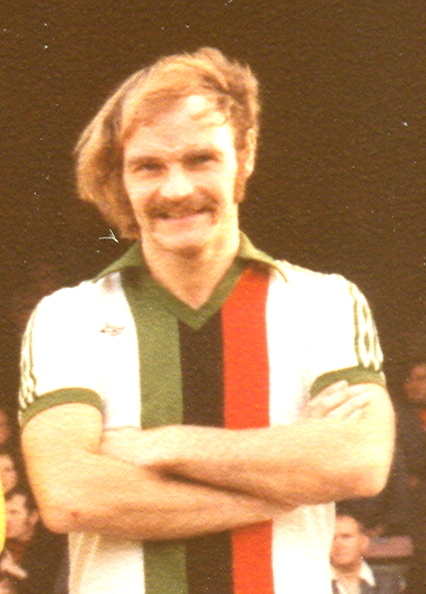 People obviously remember Ronnie McFall as a long serving manager of the Glens and Portadown. But he was also a player at left back in a very successful Glens team, prior to taking on the manager role in February 1979. I spoke to Ronnie about his nine years at the club.

“I started out at Portadown before moving to Dundee United in my early twenties. When there I was offered a contract at Fulham by Vic Buckingham, the former Barcelona manager. But I decided to come home and had a few years in good Portadown teams with some very good players, including a few who I later brought to Glentoran.

Towards the end of 1975, Billy McKeag packed it in, and Bobby McGregor contacted me to come to Glentoran. I was happy to get the chance at one of the big Belfast clubs and the Glens already had some very good players".

1976/77: A remarkble season for Glentoran by anyone's standards. It started in August with a 6-2 home Ulster Cup win over Linfield at the Oval, a 9-1 away win at Bangor, a very unlucky 3-2 home defeat by FC Basle in the UEFA Cup, then a magnificent 5-1 win over the Blues in the Gold Cup Final at Windsor. Goals were coming from everywhere, particularly 47 from Ulster Footballer of the Year Warren Feeney. It was one of those rare seasons when not one Glentoran supporter doubted we would win the league, eventually finishing five points ahead of Glenavon. We won seventeen of our twenty-two matches, finishing as highest scorers but also with the best defensive record in the league. 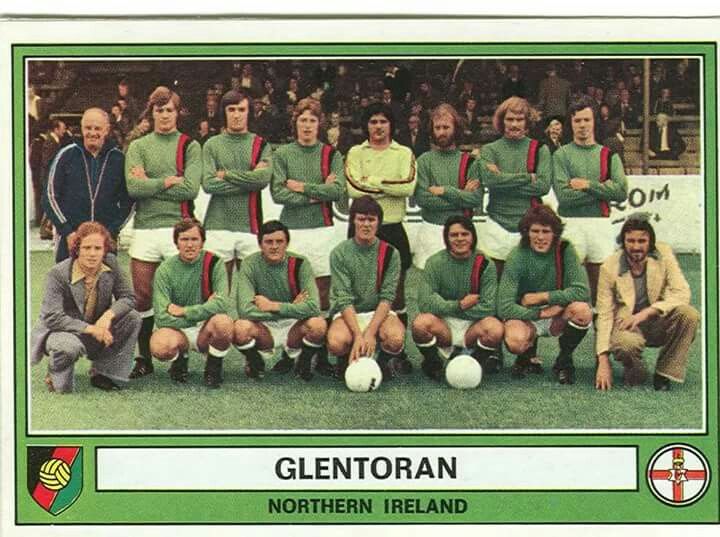 “In my first full season we added Dennis Matthews and Tom McVeigh and were outstanding from the start. That was a team full of leaders. Thre was a lot of quality already at the club when I was signed, like Rab McCreery, Johnny Jamison, Roy Walsh, Warren Feeney, and Alex Robson. Plus, we had a couple of young players in Billy Caskey and Victor Moreland who everyone knew were going to really make it. We were all mentally strong with a real hunger and desire and a good balance of youth and experience. It was a strong. tough team who all fought for each other and had a lot of fight. We started the season with really big wins over Linfield in the Ulster Cup and Gold Cup and kicked on from there. We were confident all season that we would win the league and we did pretty comfortably”.

1977-78: Bobby McGregor stood down as manager at the end of that season to be replaced as Manager by Oval legend, Arthurs Stewart. For a while things carried on seamlessly, retaining the Ulster Cup with a 3-1 Final win over Glenavon at Windsor Park.   Then there were the heroics of the home tie with Juventus in front of 30,000 supporters at the Oval. But an implosion was close, starting with the loss of newly appointed captain Alex Robson, released after an incident at the end of a home win over Larne in November 1977. A dramatic Boxing Day home defeat put Linfield into the driving seat and without the presence of Robson, we never seriously looked like catching up, finishing second, six points behind the Blues and adding only the County Antrim Shield at the end of the season.

“Obviously playing Juventus was a highlight of that season. We were playing virtually the entire Italian international team with players like Tardelli, Gentile, Causio, Bettega and Dino Zoff but we kept them to 1-0 that nigh. We definitely deserved a draw, but Warren Feeney picked a bad night to miss a penalty for us. Billy Caskey was playing centre forward that night and he battered them from start to finish. A fantastic appointment from the whole team but Caskey was different level, considering the stick he took from their defenders. That generation of players were very fortunate to get playing against teams of that category. They were sheer class both on and off the pitch. The way we were treated when we went to Turin showed us how real top clubs behaved. They looked after us very well from start to finish. I think we had something like a fourteen course lunch! It was a great experience. 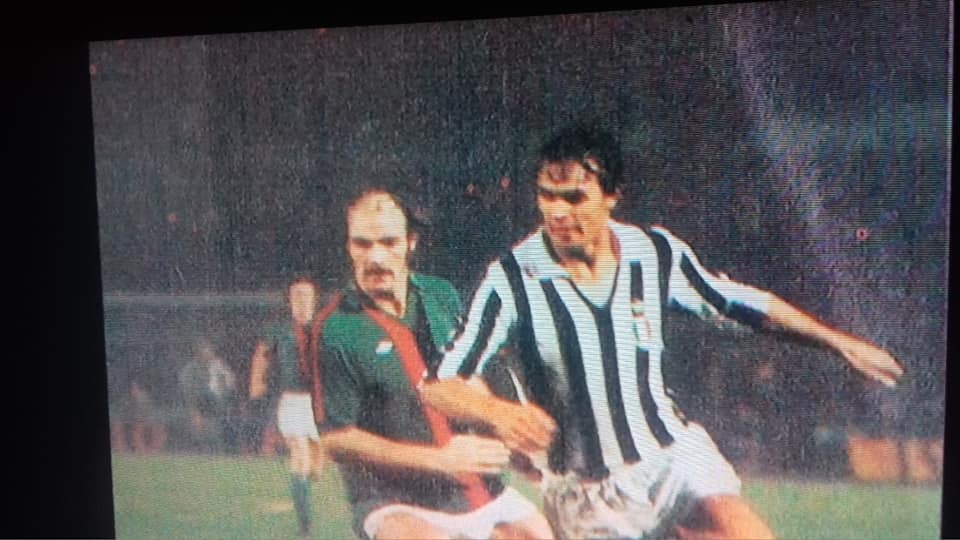 Ronnie in the away game v Juventus

It’s a pity that team broke up so quickly. Caskey and Moreland got a great chance to go to Derby then Tulsa and no one can ever hold young players back when they get a chance like that, But losing Robson was a massive blow and Tom McVeigh damaged his knee and had to retire. He was a good midfielder”.

1978/79: The following season started off in high controversy as a week in our top scorer Warren Feeney, who had scored eighty seven goals over the previous two seasons, fell out with the club in what looked like a manufactured row, and announced he wanted to join Roy Coyle at Linfield. A deal was done that brought Northern Ireland Player of the Year Jimmy Martin back to the Oval. Martin scored 22 goals in 22 games, but no one else hit more than five as the Glens limped along in mid table, using over thirty first team players over the course of the season. Only McFall, McCreery, Jamison, Walsh and Andy Dougan remained from the league winning team of a year before.

It was only a matter of time before Arthur Stewart resigned, eventually doing so in January 1979, taking up a coaching job in the USA. Favourite to replace him was former Glens player Jackie Hutton, then managing the revival of Cliftonville, double league winner Billy Johnston, then at Ballymena United, and Alan Campbell, whose Glenavon team were a few places above us at the time and had been runners-up in our title winning season. So, when the board announced the appointment of our left back at the start of February, it came as some surprise to the Glentoran Family. 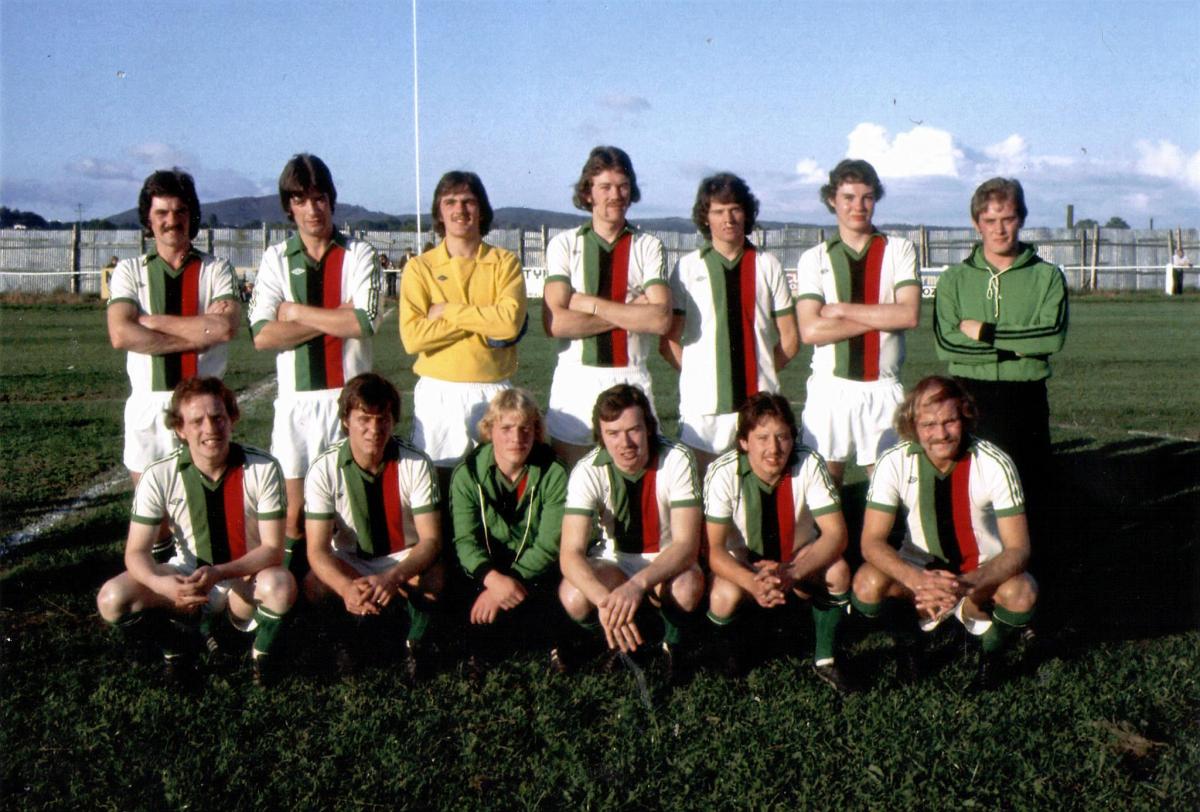 “I was still young when I applied for the job, but I’d always been determined to go into coaching or management. I’d been encouraged by Gibby McKenzie at Portadown and had gone to the FA Coaching Centre at Lilleshall to do my badges when I was 21. So, I was ready for it. Also, I think the Board wanted a fresh approach to things. I was very ambitious, and I think that suited them.

The team really needed rebuilt because we’d lost a lot of good players and some of the ones who were still there were getting older. Also, Feeney going to Linfield had left a lot of bad blood about the club, so I knew I had a job to do. The playing side was in a bad state but the board was a progressive one so I knew I would get the time and support I needed to build a good team.

First thing I did was sign Gary Blackledge in the first week I was manager. I knew Blackie would be a great signing for us. He was a great player with a real eye for goal. That was a good way to start.”

Ronnie Immediately retired from playing as he set out to rebuild the Glens from a very low base. We finished that season in fourth place, winning only nine of our twenty-two games but five of those came after McFall’s appointment as we lost just two of his twelve league games in charge.

1979/80: Despite the early signing of Blackledge, there were no high-profile signings in the summer of 1979. Only midfielder Alan Gracey from Glenavon came in, with the rumour doing the rounds that the fee was the old pitchside spiked railings from the Oval! The backbone of the team that season were new players like Gracey, utility hard man Norman Porter and youth prospects like Dean Irvine, Ron McCreery, Don Leslie, Ronnie Carleton and young midfielder Terry Moore, picked up from Larne. Roy Walsh replaced Johnny Jamison as captain with Matthews, Jamison and Rab McCreery still surviving from the last trophy winning side. The ray of hope came with the emergence of seventeen-year-old striker Ron Manley, promoted from the Seconds to make fourteen starts alongside Gary Blackledge, scoring three goals and doing enough to suggest he would be around for a while. 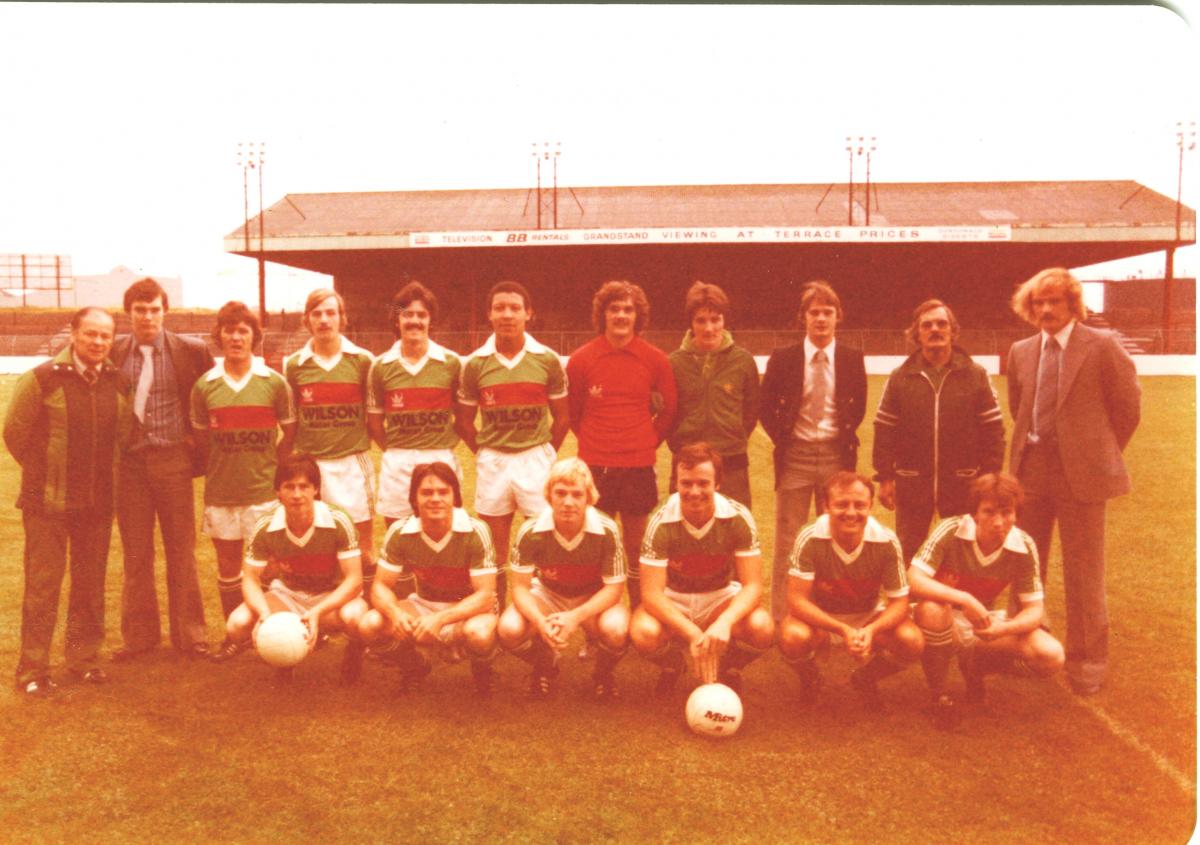 “The board – men like Johnston Nelson, Billy Stephens and David Chick – were very supportive but at that stage there wasn’t a lot of money around, so we had to try to develop young players from the Seconds and Colts. We looked pretty good for most of the season but when the tougher matches came after Christmas, we didn’t have the experience or the quality to stay up with the leaders. Then we lost our captain, Roy Walsh. Roy was a very good player, but he was around 24 or 25 when Swindon came in for him. He really wanted to go so there was nothing we could do to keep him. That was a blow. I think he was Ulster Player of the Year the season before, so he was a terrible one to lose.”

The Glens finished that season third, a point ahead of resurgent Cliftonville and three behind Ballymena United, with Linfield winning the title. Late in the season McFall signed a former Portadown team mate, full back Robert Strain, from Crusaders and appointed him captain to replace the departing Walsh. Strain was to stay at the Oval for fourteen years in a variety of roles, playing his part in the exciting chapter about to unfold.

We were about to have what most Glenmen and women over a certain age would say was the most exciting and one of the most pivotal summers in the club’s history, closely followed by a season ending in a never to be forgotten achievement.