A magnificent 7 for the Legends 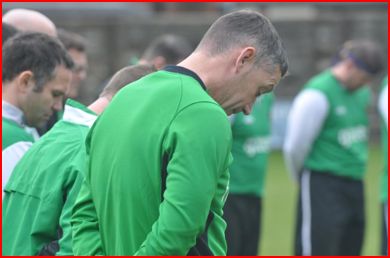 Last Sunday after many of their ranks returned to the Oval for the pre-game celebration the day before, the Glentoran Legends XI donned the Green, Red and Black once again in a very special fundraising game at Dundela in aid of Meningitis Research.  We all know the reason why the charity is close to our hearts and it was wonderful of the Dundela committee to offer to play the now annual charity game as a fundraiser for this most worthy of causes.  With that in mind some of the greatest names to have played for both Glentoran and Dundela in the last forty years or so went head to head again and put on a terrific display for the large crowd that attended.
Before the game there was minute's silence in honour of former Dundela player Gary Quinn who had passed away the day before , Michael Bowers , brother of Barney , who had passed away a week before and also for young Glentoran fan Stephen Kidger who had also passed away  last week. It was a very poignant moment for us and one that was impeccably observed. Both teams also wore black armbands.
Last year Dundela had triumphed in the first of the annual games, albeit by a dodgy last minute penalty, in a game that the Glentoran Legends should have been five or six up at half time. This time round it was a similar first half with the Glentoran Legends having most of the play but this time they went in 4-1 up at the break.  Goal scorer supreme Gary Blackledge showed he has lost none of his eye for a goal by scoring two of those four goals, with Raymond Morrison and Justin McBride notching the other two.  An ankle injury forced the withdrawal of Darren Parker, who was replaced by Barney Bowers, who wasn’t a bad replacement to have. 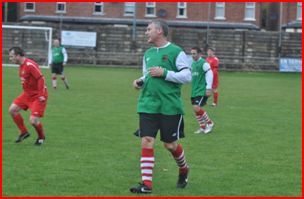 At the break a bit of a further shuffle of the pack saw some changes to the Legends line up with Gary Hillis coming on for Raymond Morrison and Tom Cleland replacing Jim Cleary, as they took a breather before returning later in the game. Darren Finlay also came on for Andy Mathieson who had aggravated a back injury.  Dundela also made a few changes and they seemed to settle that bit quicker and soon the score line was 4-3 to the Legends. Suddenly, the Legends found their way again and that man Blackledge completed his hat-trick then followed it soon after with his fourth and the Legends sixth.
There was one particularly funny moment in the second half as Darren Finlay attempted a bicycle kick , that well lets just say the photo doesn’t do it justice as it looks better in the photo than in reality. Needless to say the laughs on the Legends bench went on for quite a while after.
The final gloss on the performance game in the dying seconds when Johnny Jamison , now on for Gary Blackledge , rounded off a great move by slipping the ball past the full back and then clipping the ball over the keeper. A great moment and one that Jami will dine on for some time!! 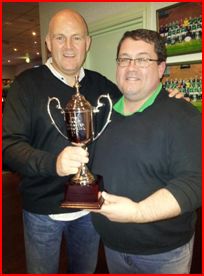 All in all another great display and great entertainment for the large crowd who were in attendance, most of whom retired to the clubrooms for the afternoon of cabaret and further fundraising in aid of Meningitis Research.  Whilst in the clubrooms Dundela manager Mark Snodden thanked everyone for their support on the day and proudly announced that £2000 had been raised for the charity, which was a fantastic amount and will be put to some very good use by the charity. Whilst on his feet Mark also had the honour of handing over the David Mc Master Memorial Trophy over to the Legends captain on the day Jim Cleary which in turn he passed on to myself as Chairman of the 1923 who proudly sponsor the Glentoran Legends.  The trophy will now be proudly on show in the 1923 Clubrooms alongside the Butterfly Club trophy won by the Legends in Scotland in August.  Incidentally, that £2000 takes the amount that the Glentoran Legends have helped to raise for charities to just under £50,000 in four years. Well done everyone.

For the record the Legends squad last Sunday was –

Next up for the Legends is a four team tournament, in aid of the Northern Ireland Hospice, at Seaview on Friday 26th October when the Glentoran Legends will be up against their counterparts from Linfield, Crusaders and Cliftonville. The event is sponsored by Umbro and there will be a cup up for grabs for the winner on the night. It should be a great occasion. Further details will be posted on the Glentoran website closer to the time.