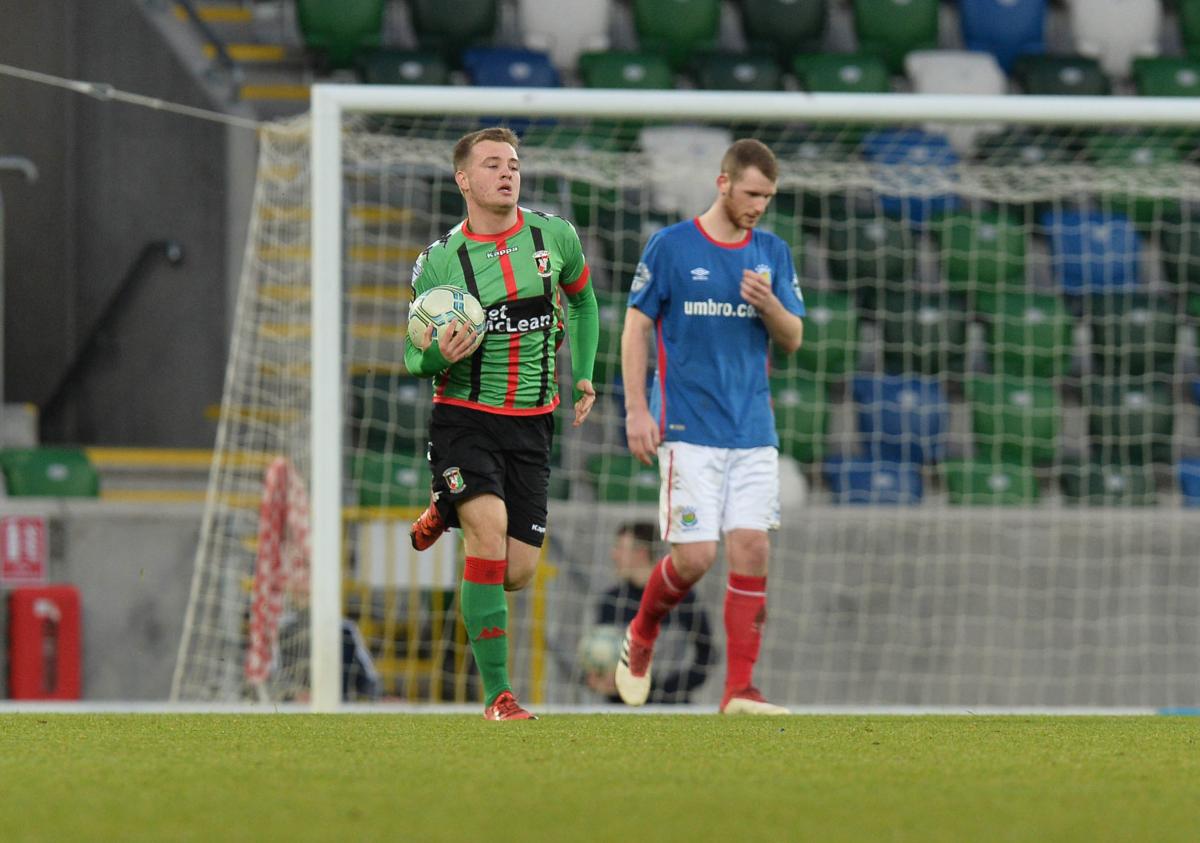 Glentoran went into this game as underdogs having finished 16 points behind their ‘Big Two’ rivals in the Danske Bank Premiership but form often goes out the window in these fixtures and that was certainly the case at the National Stadium on Wednesday evening. 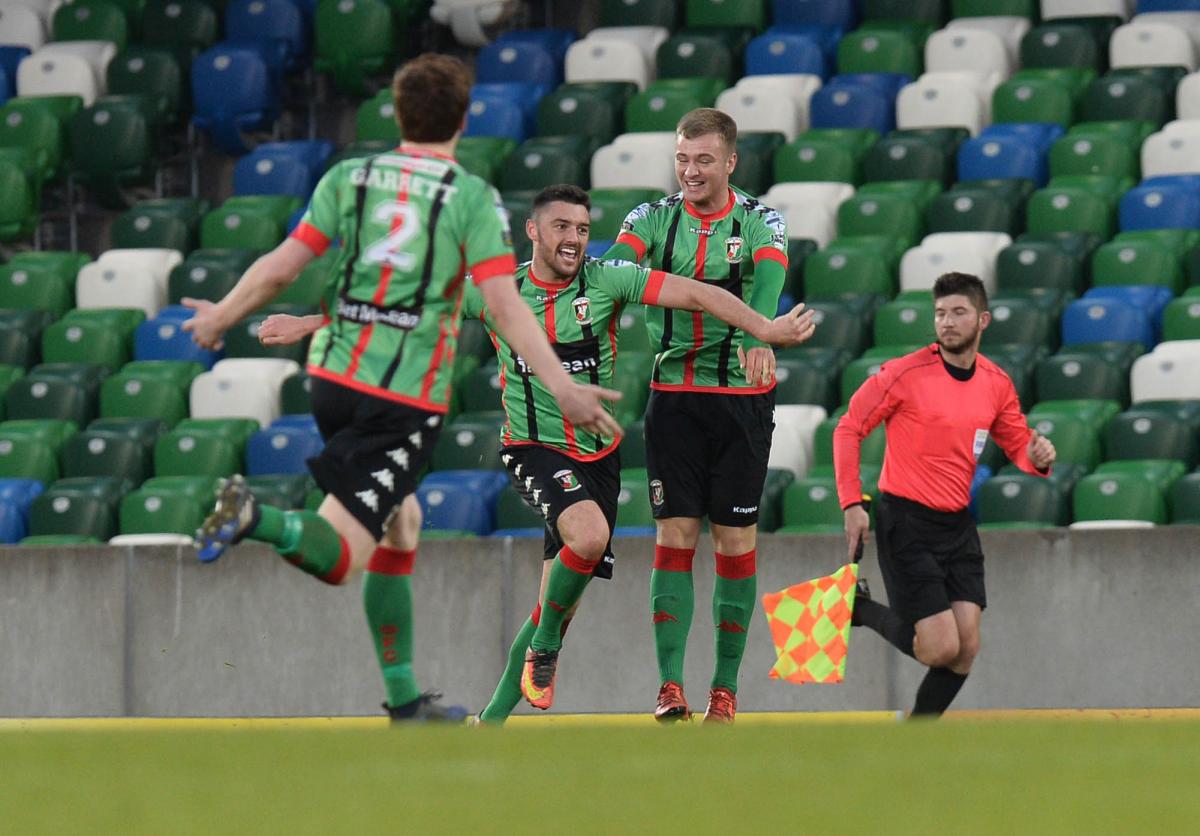 The Glens started brightly and dominated the opening 20 minutes but without testing young Alex Moore in the home goal. The best chance in that opening spell came just 3 minutes in when John McGuigan and Robbie McDaid linked up well but McGuigan’s shot was blocked and the ball cleared. On 21 minutes Linfield broke forward. Andrew Waterworth looked suspiciously offside but the assistant referee didn’t flag and it was left to Elliott Morris to produce a stunning save to keep the game scoreless. A long throw in by Jonny Addis was then flicked on by Calum Birney and the ball eventually broke to Glens’ skipper, Marcus Kane. The visiting fans in the North Stand were on their feet as Kane drove the ball across goal and towards the far corner but unfortunately it drifted inches wide of the post. 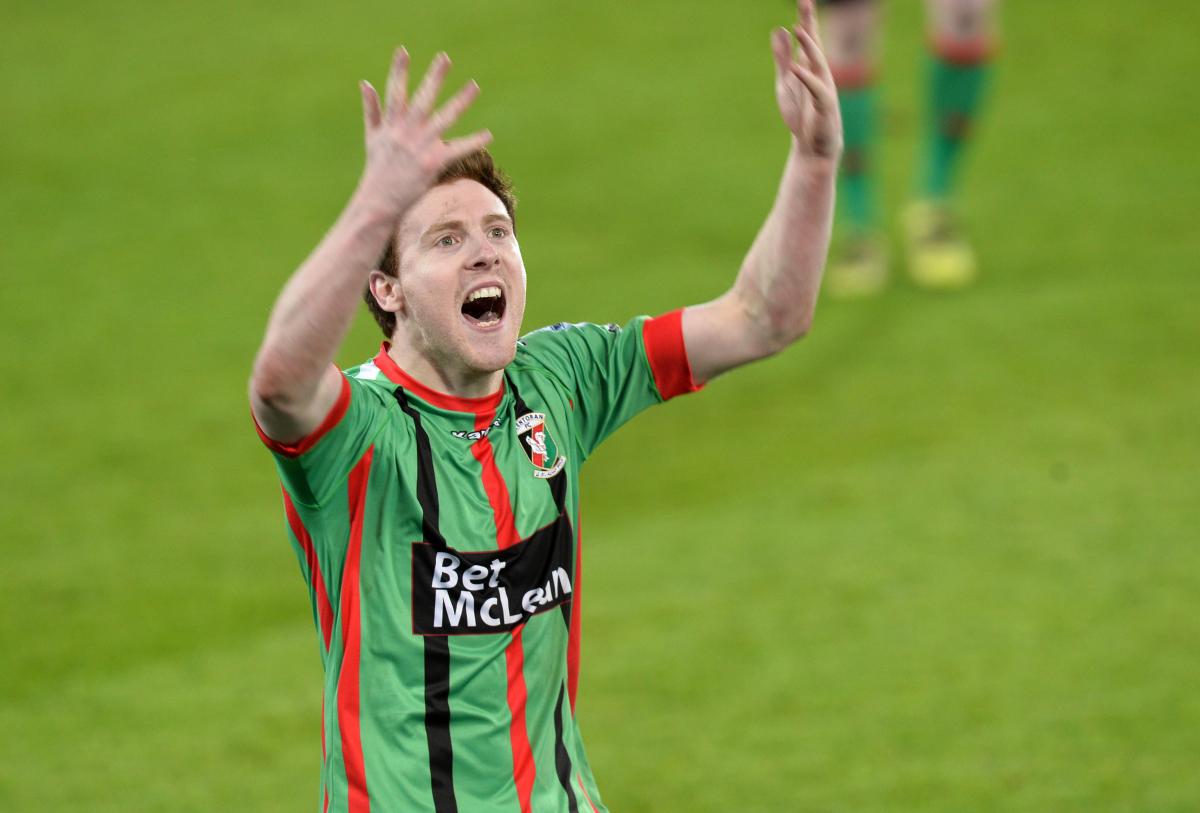 Linfield took the lead in the 26th minute. Kurtis Byrne controlled a cross from the right and held off Calum Birney before slotting the ball into the bottom corner. It should have been 2-0 six minutes later! A Linfield corner was cleared but Jimmy Callacher lobbed the ball back into the danger area and it fell to Mark Haughey. The big defender looked to be well offside but play continued and Elliott Morris was forced to make another excellent stop. Glentoran rallied and fought back. A great break by the excellent John McGuigan saw the Glentoran player cynically fouled 25 yards from goal by Stephen Fallon. Curtis Allen took the free kick but struck the Linfield wall. The Glens lost Calum Birney due to a groin injury on 40 minutes and could have lost Robbie McDaid just before the interval when a reckless tackle by Joe Crowe saw the Blues defender escape with just a yellow card. Half time: Linfield 1-0 Glentoran. 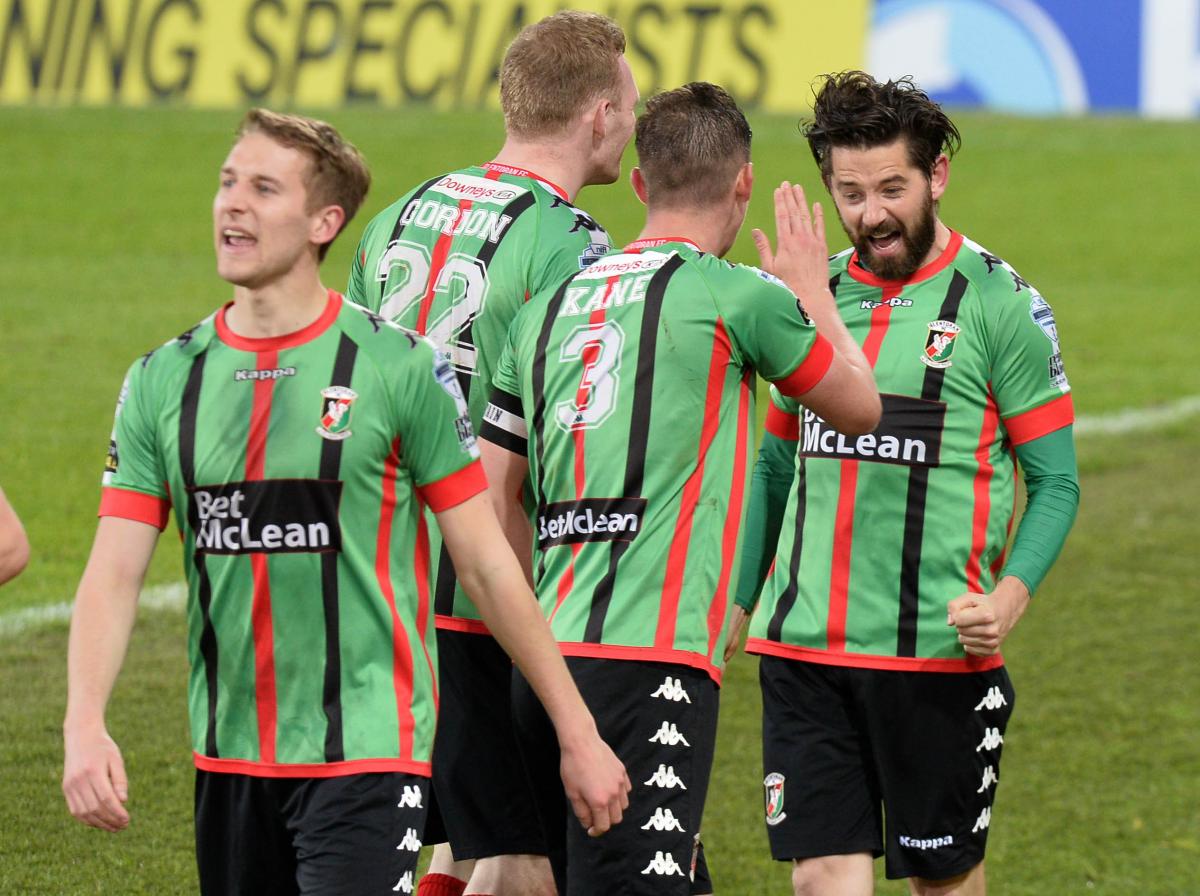 The Glens started the second half brightly and almost levelled things up on 48 minutes when Robbie McDaid’s shot from the edge of the area forced an excellent save from Alex Moore. It was Linfield though who extended their lead on 51 minutes. A cross from the left found Stephen Lowry. His shot was well kept out by Elliott Morris but Andrew Waterworth reacted quickest and his deflected shot looped over Morris and into the net. Just after the hour mark Glentoran had a lifeline. The persistent Curtis Allen got the better of Jimmy Callacher in the corner of the box and the Blues’ defender fouled him. Penalty to the Glens! Substitute Dylan Davidson took responsibility and sent Moore the wrong way to make it 2-1. On 64 minutes the Glens had a chance to draw level when a ball into the area was flicked on by Willie Garrett but Robbie McDaid’s shot flashed wide of the post. 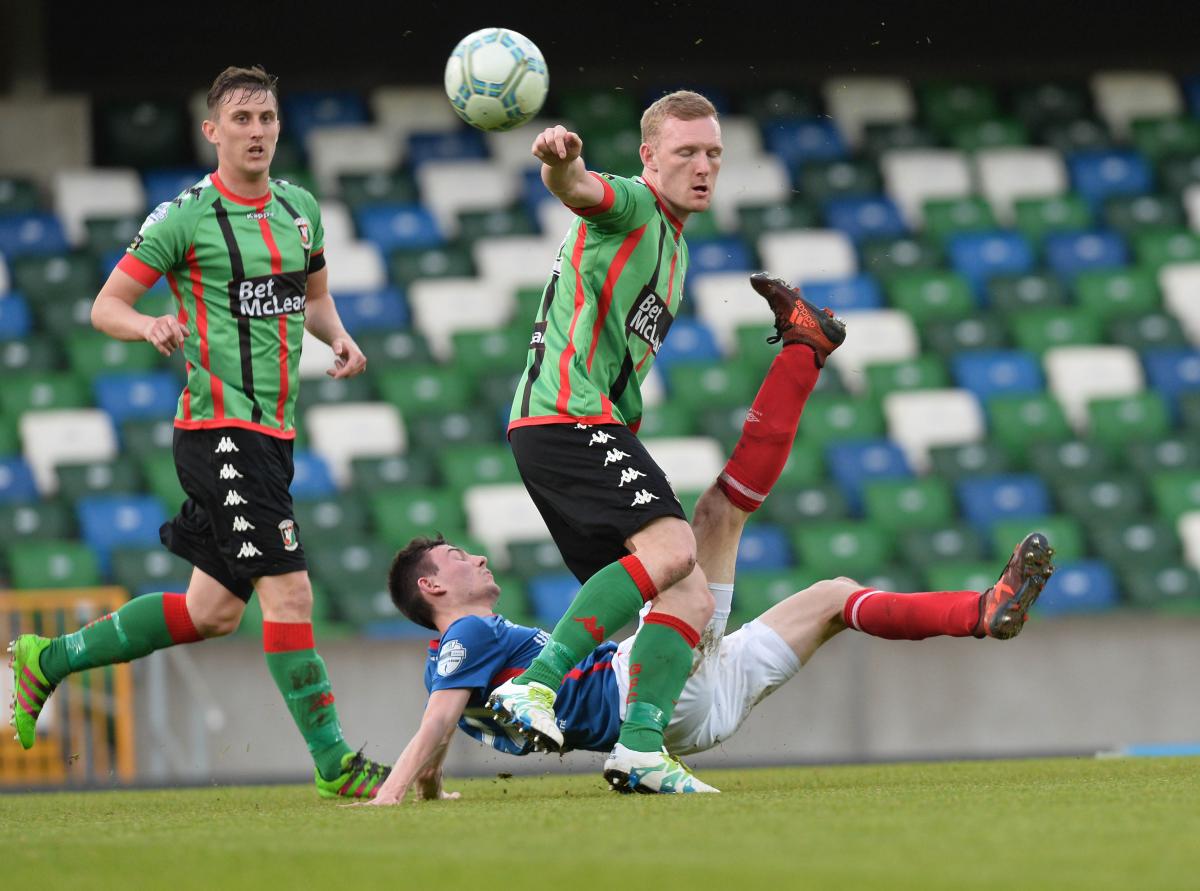 The Glentoran fans didn’t have to wait long though. Marcus Kane picked out Steven Gordon on the edge of the area and his perfectly weighted pass found John McGuigan who curled the ball past a helpless Moore from the edge of the ‘D’. A superb strike and certainly the goal of the game. On 77 minutes a brutal two-footed tackle by Kirk Millar on Robbie McDaid brought just a yellow card! From the resulting free kick though the Glens got their revenge in the perfect manner. Ross Redman’s free kick was met by Willie Garrett and his header found the far corner of the net to put the Glens in front. 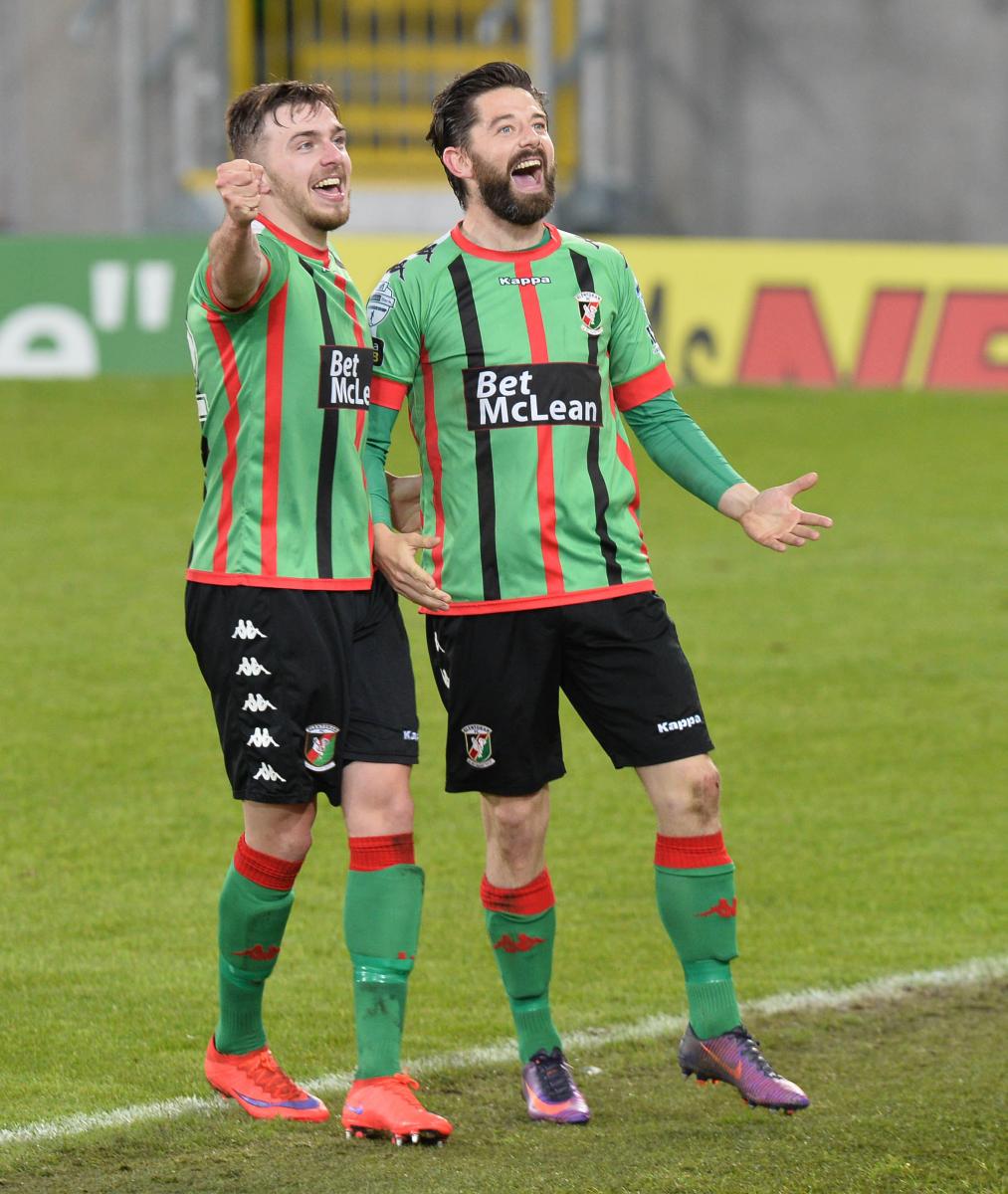 4 minutes later it was 4-2! The hard working Robbie McDaid chased a long ball from Nathan Kerr down the right. He got the better of Mark Haughey and drove along the by-line towards goal before picking out his strike partner, Curtis Allen. Allen smashed the ball home from 12 yards and amazingly the Glens were now 4-2 in front! Linfield reduced the deficit in the final minute through Stephen Fallon but the Glens saw out the 4 minutes of stoppage time to set up a meeting with Cliftonville at Solitude on Saturday afternoon. 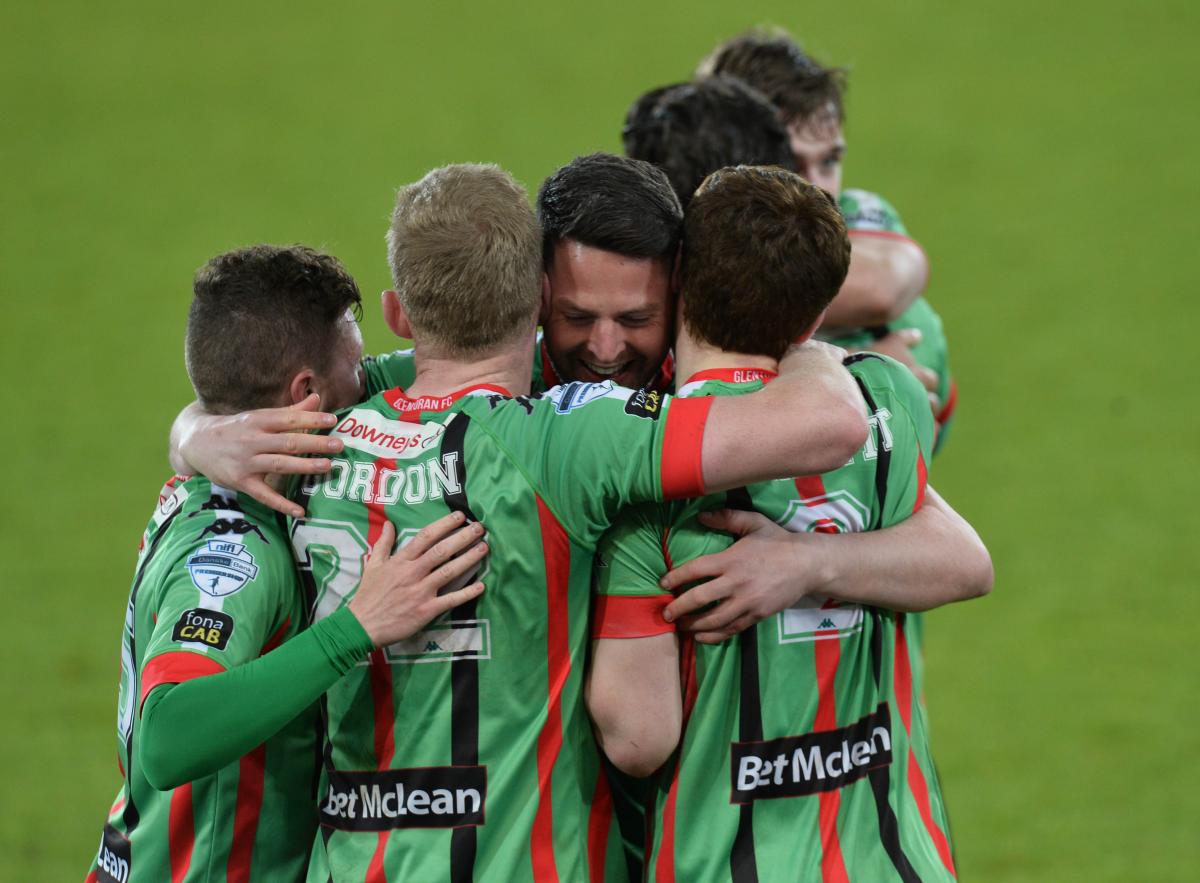 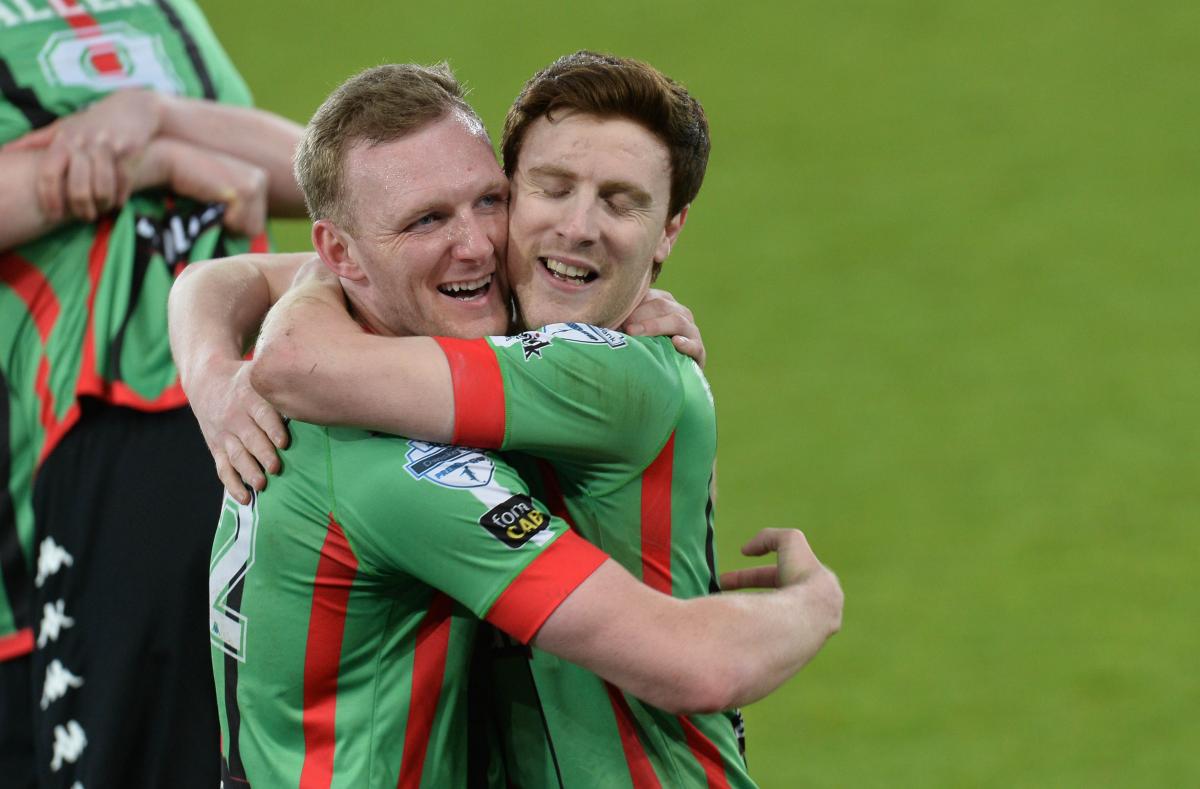 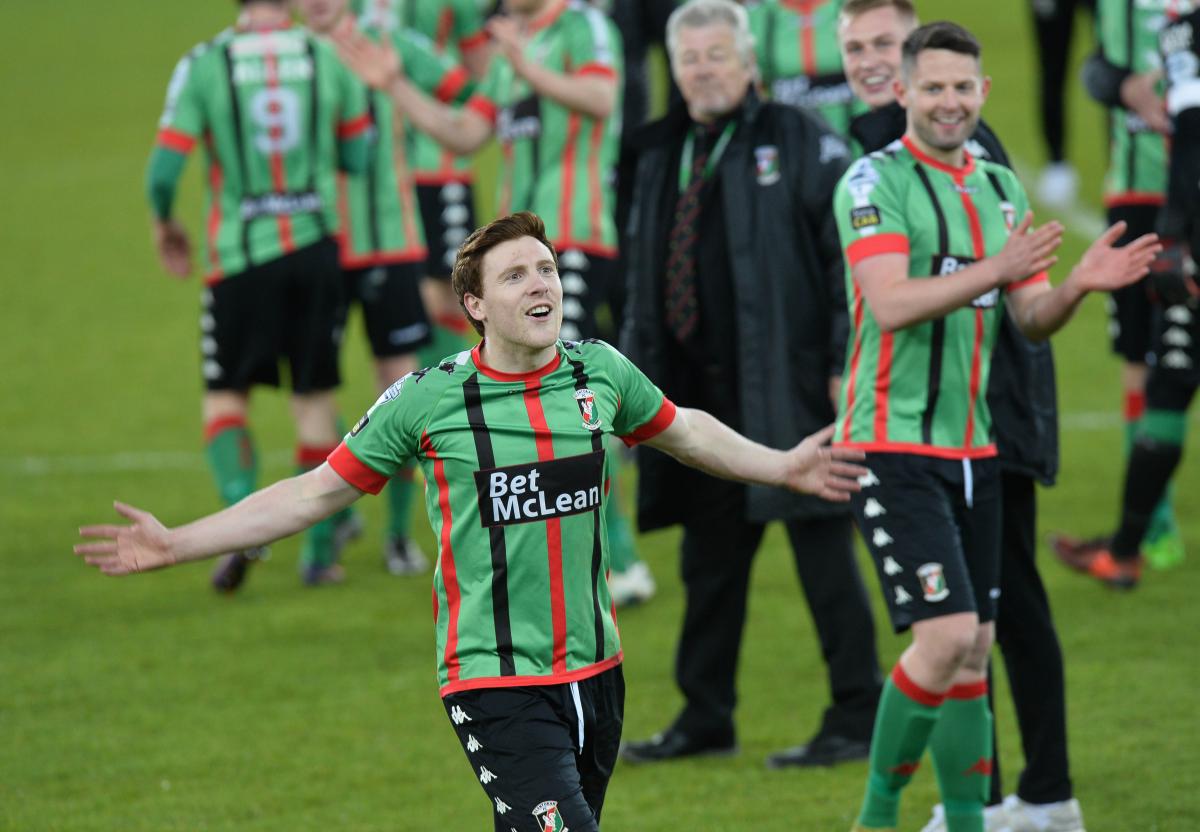