Mick McDermott made three changes from last week’s win at Institute: the suspended Robbie McDaid was replaced by Paul O’Neill, Paddy McClean started in midfield in place of Elvio Van Overbeek, and Gavin Peers returned to central defence with last week’s goalscoring debutant Keith Cowan one of this evening’s substitutes. 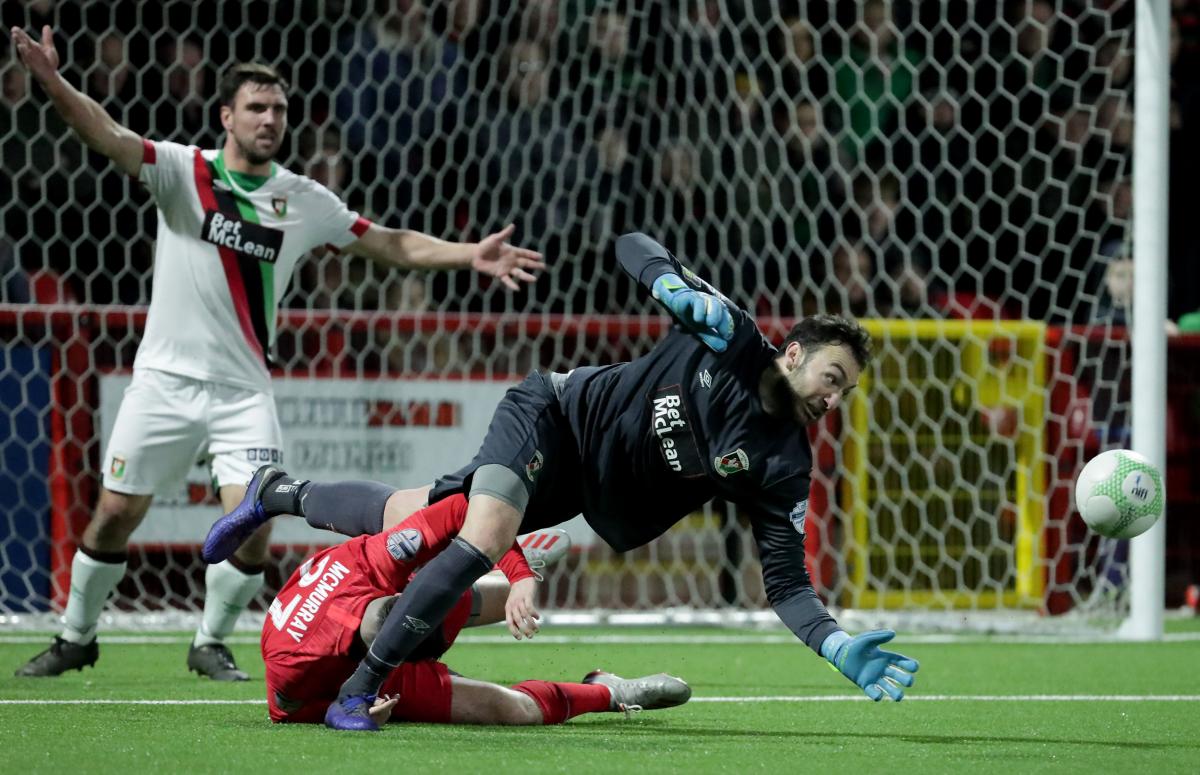 The first half hour was very much in Larne’s favour with the midfield trio of Mitchell, Randall and the outstanding Sule dominant and the first clear cut chance going to Johnny McMurray, whose shot hit the side netting, to the disappointment of the home support who thought it had gone the other side of it

.Despite Larne’s superior possession, it was the Glens who had the ball in the net first when Paddy McClean, goalscoring hero on our last visit to Inver, rose on nineteen minutes to head Gavin Peer’s cross past Conor Devlin. Referee Stephen Gregg disallowed it for offside, but as our photograph shows, there seemed to be a Larne defender between Paddy and the keeper. 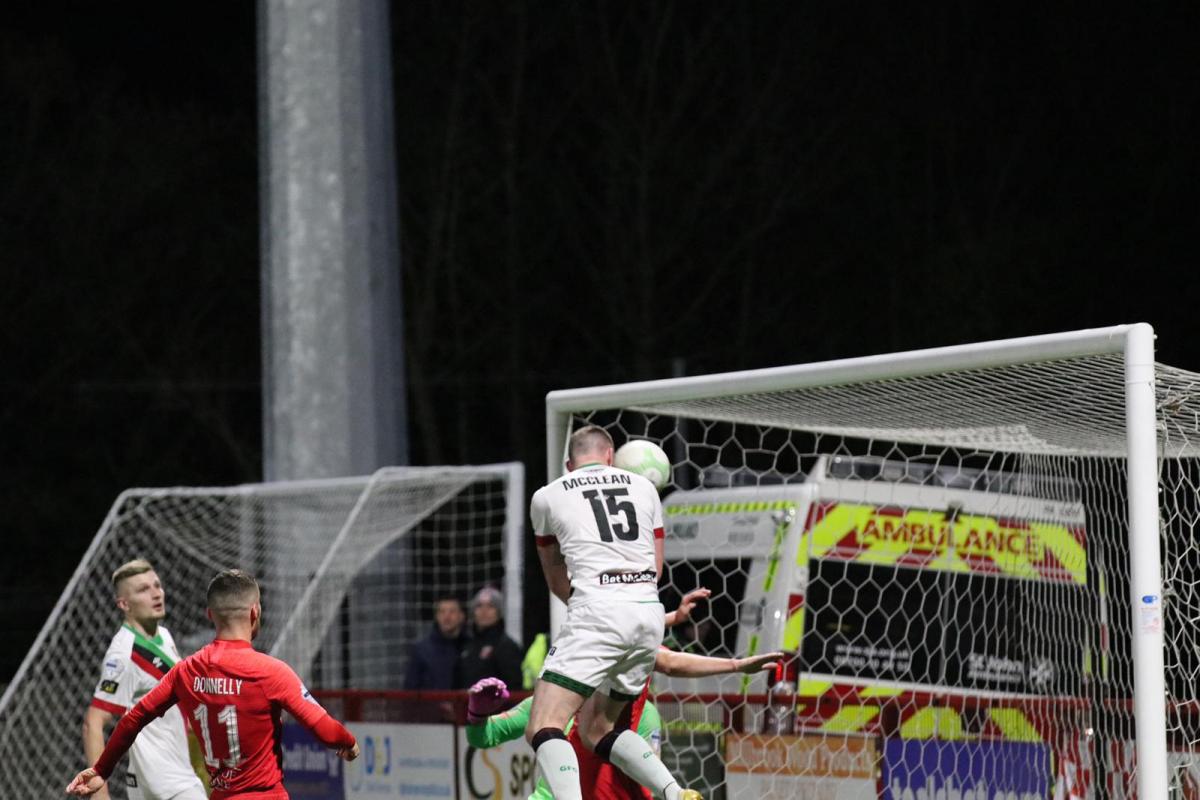 A minute later Marijan had to make a point blank save from Mark Randall after a Donnelly corner was nodded on by McMurray. During this incident, Willie Garrett took a nasty blow to the face from the rushing McMurray and had to be replaced by Keith Cowan. An unfortunate blow for the in-form Glens defender.

The next fifteen minutes were more even, with efforts on goal, for Mark Randall for the home team, and from Peers and the uncharacteristically quiet Hrvoje Plum for the Glens.

The Glens started the second half much more brightly and made an unexpected breakthrough on 51 minutes when Caolan Marron’s excellent left footed cross from the right was nodded home by Paul O’Neill for his ninth goal of the season (and fourth against Larne), despite the not inconsiderable presence of Albert Watson. Paul was then booked for what referee Gregg considered to be an over exuberant celebration.

The Glens lead lasted just five minutes, when Johnny McMurray made a surging but unchallenged run through our midfield before laying the ball off left for Liam Lynch to give Antolovic no chance in the Glens’ goal. What was disappointing for the sell-out Glens support is that Paddy McClean made an equally impressive run through the Larne midfield in the first half, only to find he had no one to lay it off to. 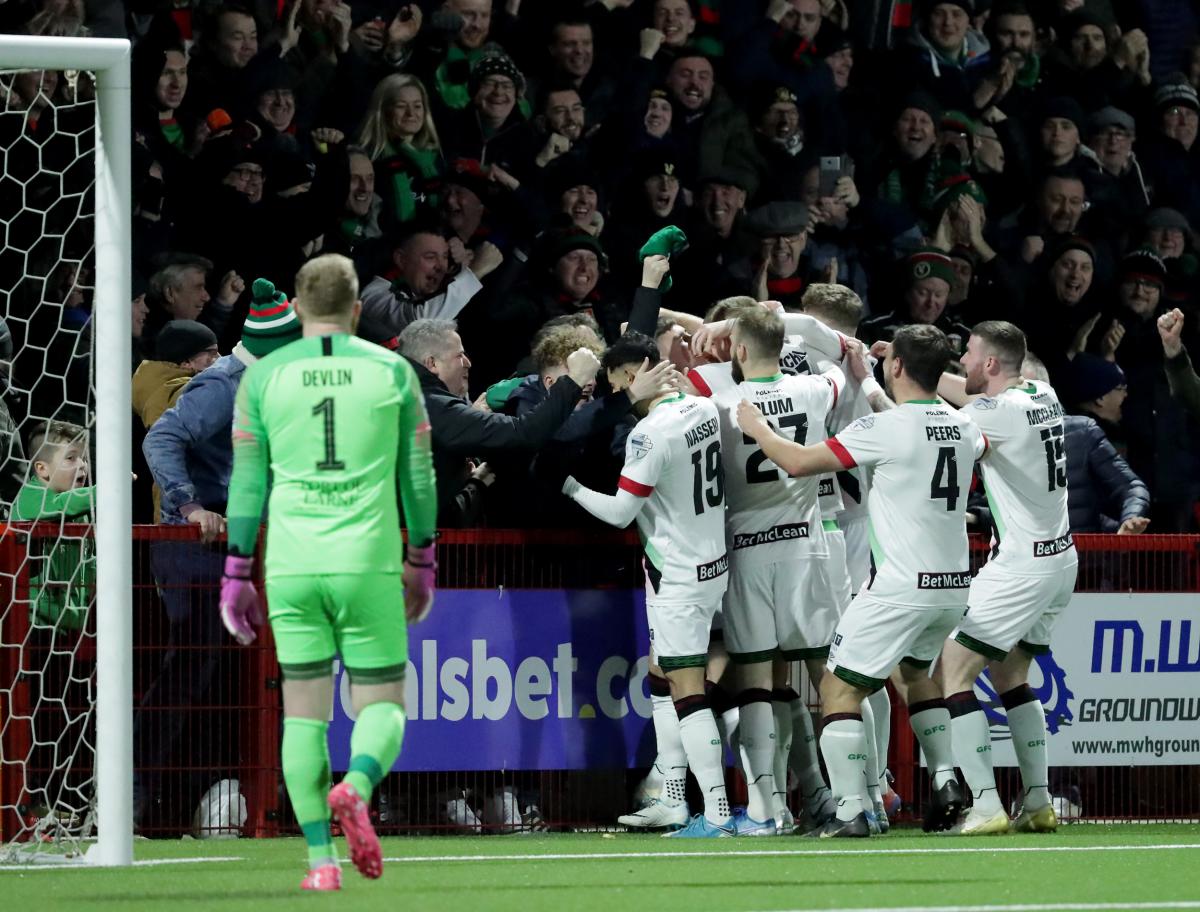 The game remained even until Elvio Van Overbeek replaced O’Neill on the Glens right flank, presumably to ensure Paul wasn’t at risk of a second yellow card after his earlier booking. In the next ten minutes Antolovic made a good save from Dean Jarvis and Navid Nasseri, also having a quieter evening, had his cross tipped over by Devlin.

Then on 72 minutes, thirteen goal midfielder Hrvoje Plum went down badly and hurt his knee when making a challenge, being replaced by Ciaran O’Connor.  A minute later Keith Cowan, immense alongside Peers in central=l defence, landed badly on his ankle, but stayed on after receiving treatment on the sidelines.

The game looked to be heading for a draw when – in the first minute of injury time – we needlessly lost possession top Tomas Cosgrave on the Larne left flank. Cosgrove’s penetrating cross reached Marijan Antolovic first, bur rather than catch the ball, he palmed the ball straight into the face of the onrushing McMurray, from where it rebounded into the Glens goal. McMurray – who was actually raising his leg to kick the ball when it hit his face – was stretchered off after he collided with the Glens’ keeper.

From the restart the Glens went straight up the pitch and another excellent Marron cross was wasted, this time by Van Overbeek, who headed straight over the bar. 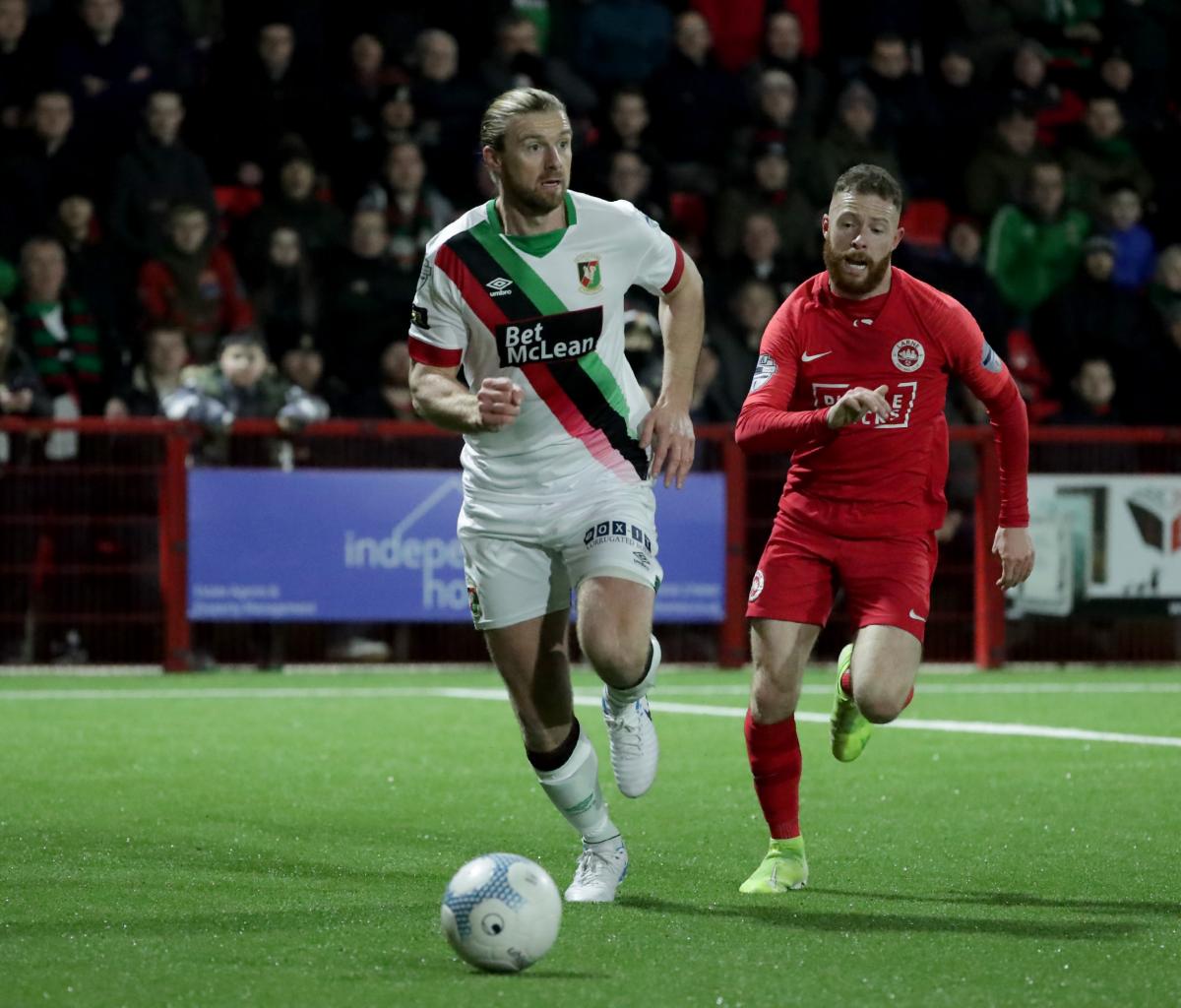 Mick McDermott: “It was a great game of football, for the fourth time this season against Larne. It’s a team that plays well in possession on their surface and our team, who defended with discipline and organisation and created a number of chances to win it. Both teams deserve credit for raising the standard and profile of Irish League football

For us coaches it is a great game to be involved in - like a game of chess. Tactical discipline was required from both teams as opposed to many Irish League games when it’s 90% blood & thunder and 10% tactical.” 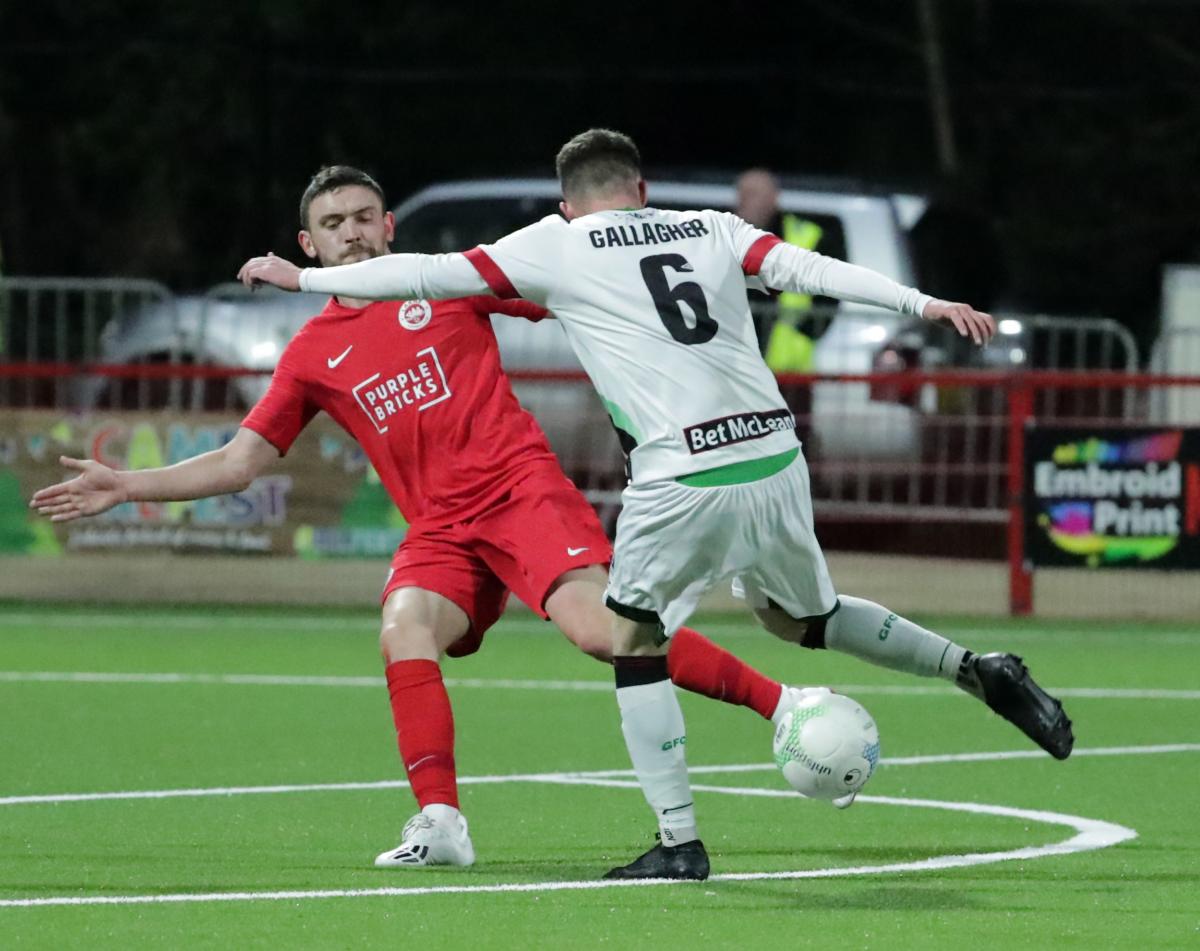