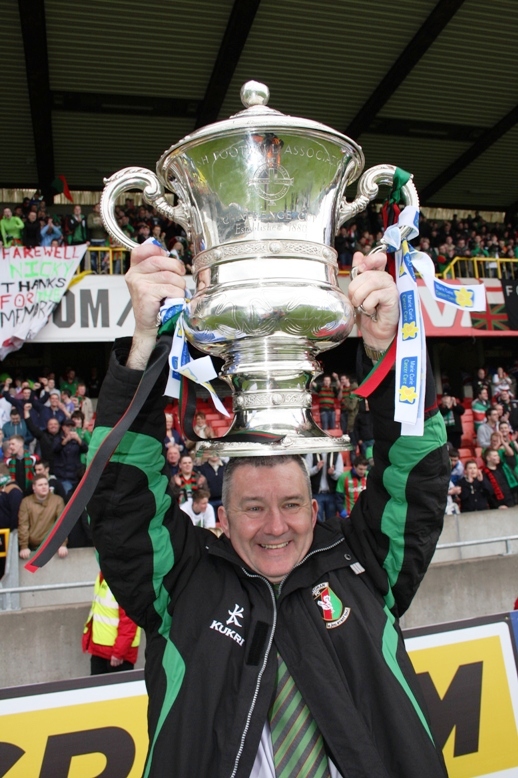 Days like this....Van Morrison told that we’d have them but there weren’t too many football people predicting a Glentoran victory in the 2013 Marie Curie Irish Cup final. Champions Cliftonville were the red hot favourite to complete a treble and after a scrappy first half, when they led 1-nil, it appeared that the game was going to form.

The Reds should have been ahead after just 8 minutes when Garrett’s left wing cross was headed back across goal by Ciaran Caldewll. Joe Gormley ghosted in at the back post but inexplicable failed to make contact with the ball with the goal at his mercy. His strike partner, Liam Boyce went close on 17 minutes drifting past a couple of Glentoran defenders before firing inches wide. The opening goal arrived on 33 minutes, Andy Waterworth used his pace to break free down the right and his ball seemed destined to find the in-rushing Stephen McAlorum but Cliftonville keeper, Conor Devlin was there to punch clear. The ball was hooked upfield and when Mark Clarke mis-controlled it Boyce was put clear. Boyce fed Gormley but Elliott Morris was quickly out to make the save. The ball however, deflected off Jimmy Callacher back into the path of Gormley and he netted his 30th goal of the season from 6 yards.5 minutes before the interval a long hopeful ball by Jay Magee was allowed to bounce in the area by ex-Glentoran defender, Jaimie McGovern. Andy Waterworth picked it up and looked certain to level things up only to be denied by the keeper’s legs. 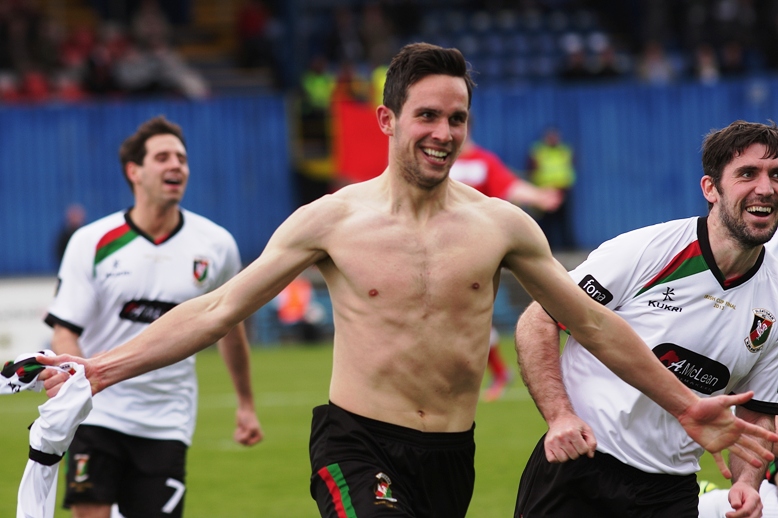 It was a much different Glentoran after the break. Although liam Boyce fired over from a narrow angle on 47 minutes, Richard Clarke and Andy Waterworth both had chances for the Glens. Just after the hour mark a free kick from deep inside the Glentoran half was launched forward by skipper, Morris. Richard Clarke got in behind the Reds’ defence and squared the ball to David Howland. Howland’s control and neat turn took 3 Cliftonville defenders out of the game and Waterworth was on hand to smash the ball past Devlin. On 71 minutes a great run by substitute, Jim O’Hanlon ended when he was crudely taken down on the edge of the area. Stephen McAlorum picked up the ball and found Sean Ward. Ward let fly from 30 yards and for a moment it looked like it would equal Glen Little’s wonder goal when the Glens last contested a cup final on 4th May (96). Conor Devlin though produced an outstanding save, tipping the ball over for a corner. Glentoran were in the ascendency and Howland (78), Carson (85) and Clarke (86) all had efforts on goal. As time ticked away a cross from Reds sub, Martin Donnelly, found the head of Liam Boyce but his header on goal lacked power and was easily collected by Morris. On 90 minutes a nice move involving Howland and Clarke ended with O’Hanlon shooting just wide. In injury time the glens had one more opportunity when Waterworth was scythed down by Smyth. Jimmy Callacher took the free kick but his powerful 25-yard free kick was straight at Devlin. 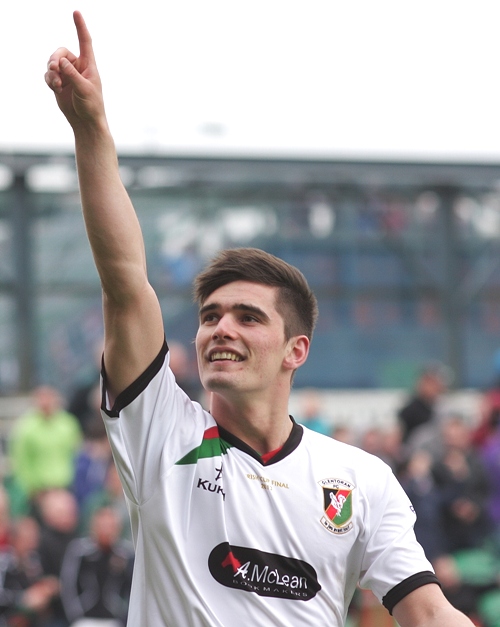 The first real chance in extra-time went to Cliftonville. Jason Hill fouled Liam Boyce and Martin Donnelly’s free-kick was just wide of the upright. Another typical mazy run from O’Hanlon set up a chance for David Howland but his goal bound shot was deflected for a corner. A minute later (97) Donnelly had a great chance when a ball from the right found him in space beside the penalty spot. Donnelly couldn’t have hit the ball any sweeter but birthday boy, Elliott Morris produced a stunning save.  On 99 minutes the Glens went in front. Jimmy Callacher was fouled about 30 yards from the Cliftonville goal. Stephen Carson took the free-kick and found Callacher whose powerful header from 7 yards gave Conor Devlin no chance.  4 minutes later it was virtually game over. Substitute, Marcus Kane, found Waterworth on the edge of the area and he skipped past Smyth before firing low into the bottom corner of the net. As the first period of extra time expired a 20-yard free kick from Jimmy Callacher shaved the Reds crossbar.

2 minutes into the final phase of the match a long ball forward from Elliott Morris was gathered by Richard Clarke. He drove into the area but his cut back to Andy Waterworth lacked pace otherwise the big Glentoran number 9 would surely have had a hattrick. A minute later the Glentoran support stood to applaud the legend that is Colin Nixon as he replaced another loyal Glentoran servant, Jason Hill who’d picked up a hamstring injury. On 110 minutes another Glentoran break and another missed opportunity as Richard Clarke opted to shoot (wide) when a better option would have been a square ball to Howland or Waterworth. On yet another Glentoran attack Richard Clarke was fouled near the by-line by Barry Johnston. Johnston then appeared to stamp on Clarke which provoked an out of character reaction. Ciaran Caldwell also got involved and as both he and Clarke raised their hands, referee Arnold Hunter felt he had no option but to send both players off. A disappointing way for both to end their first Irish Cup final, particularly when the instigator had no action taken against him! In added time in extra-time there was one more opportunity for Andy Waterworth to get his third but once again Devlin was in the right position to deny him. Glentoran fans weren’t too bothered though. The Irish Cup was heading East for the 21st time after a wait of 9 years.

Congratulations to Eddie Patterson, his backroom staff and the players for giving us all a magnificent end to what has been a difficult year. LJAT

Or watch the entire match HERE on BBC iPlayer 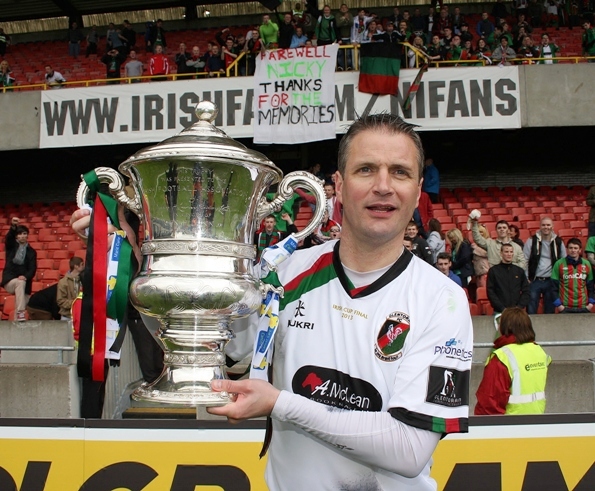 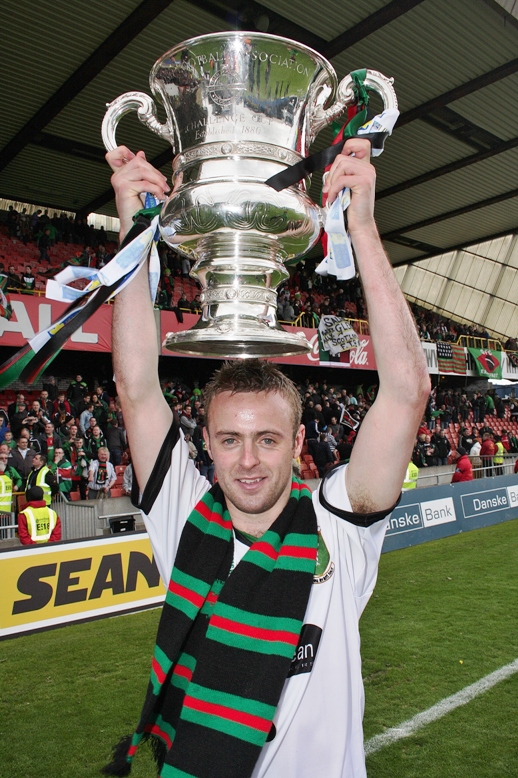