A commanding performance and a convincing victory on Wednesday evening back at the Ashfield Arena took Glentoran Women to the top of the Dankse Bank Women’s Premiership table for the first time this season. Two goals apiece for strikers Kerry Beattie and Lauren Wade ensured that Stephen Murray’s side claimed all three points to leapfrog the Solitude outfit and lead the title race by a single point.

Both sides came into the game on the back of fine respective form in recent weeks. With influential captain Jess Foy still recovering from a ligament tear, Cara Mervyn retained her place at left back following an impressive contribution in last week’s win against Linfield Ladies.  Shannon Dunne also claimed a starting place once again alongside club stalwart Kelly Bailie in central defence. A strong Cliftonville line-up included international captain Marissa Callaghan and ex-Glentoran full-back Yasmine White as well as recent close season acquisitions Louise McDaniel and the prolific McGuinness sisters, Kirsty and Caitlin. Both sides began with eager intent with chances at either end, an Andrews drive from distance that didn’t trouble Rachel Nornie in the Reds’ goal and a Fi Morgan header at the opposite end that just evaded the Glentoran crossbar. On 8 minutes a good cross from Beattie after clean approach play in the final third from the home side just failed to find Lauren Wade arriving late at the back post. The physical dimension to the contest became apparent on twelve minutes when a strong tackle from Fi Morgan on Sam Kelly in midfield was adjudged too aggressive; just a word and no caution at this early stage of the game from referee Louise Thompson. Glentoran began to take control in central areas with good movement on and off the ball and clear patterns of play emerging. A sustained period of intense pressure produced panic in the Reds’ defence as Lauren Wade’s well struck shot cannoned off Finnegan, the home side putting the Cliftonville rear-guard to the sternest of tests. Glentoran’s high intensity play was epitomised by midfield star Nadene Caldwell whose constant chasing, tackling and well-timed interceptions prevented Callaghan and McDaniel from gaining a foothold in the game. The breakthrough finally came on 22 minutes when the tigerish Sam Kelly chased what seemed like a lost cause deep into the opponents’ half to dispossess the hesitant Morgan and cut back for Beattie whose attempt on goal was blocked before breaking to Wade who finished with a low drive into the net. 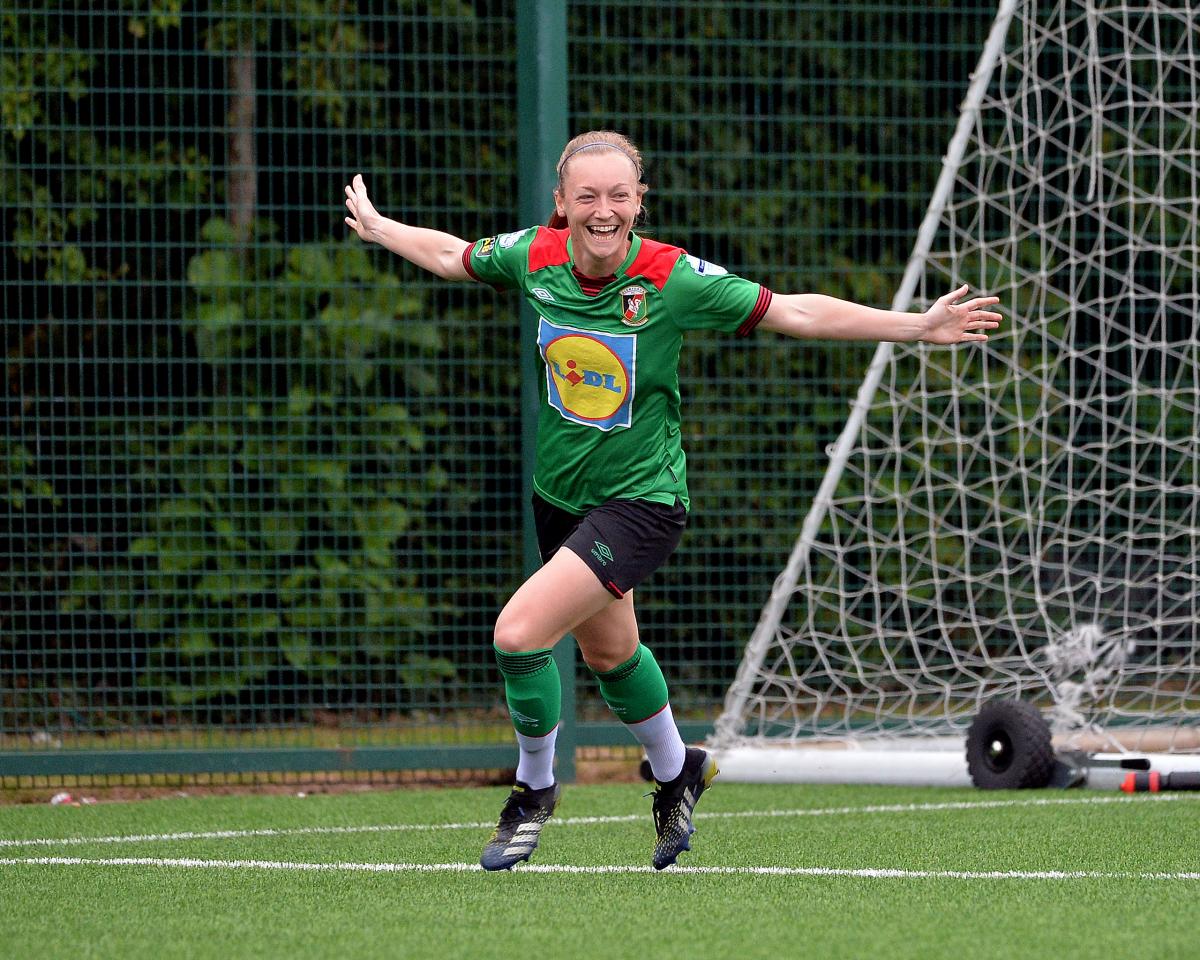 Five minutes later, a handball offence inside the area gave referee Louise Thompson no choice but to award a spot kick. Beattie coolly dispatched to double her side’s lead. With the home side clearly on top now, Beattie wasted no time from the Reds’ kick-off with a smart steal from Callaghan to feed Maxwell on the edge of the centre circle. As Maxwell continued her run down the right channel evading tackle after tackle, she showed great awareness to once again pick out the advancing Beattie who really should have extended the Glens’ lead only to see her shot strike the bar. With the Glens very well aware of the slender advantage of the 2-0 score-line and the potential psychological impact of a swift Reds riposte similar to that which led to the Solitude defeat earlier in the season, it was no surprise that home side sought to further extend the lead before the half-time whistle. Despite a blatant tug on Maxwell’s shirt, preventing her advance on goal on 41 minutes, and which remarkably went unpunished by the officials, the Glens chose to keep piling on the pressure. Sure enough, the third goal came on 42 minutes with Lauren Wade finding the net following a Beattie cross from the left flank. As the eventful half drew to a close Reds captain Callaghan led by example trying to rally her teammates into a quick response with a penetrating run deep into the Glens’ half that was dealt with well by the impressive Annie Timoney at full-back. 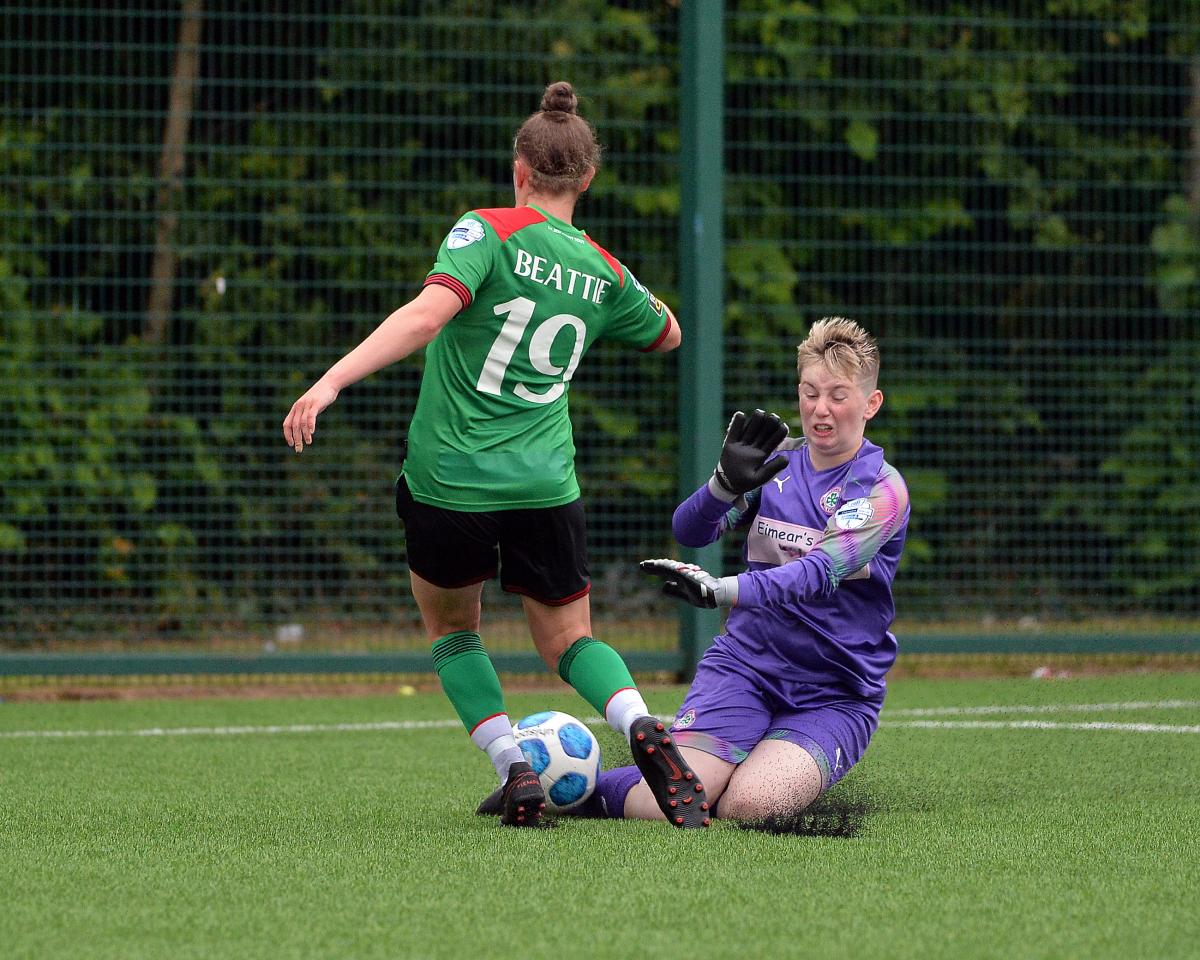 As the second half got underway it was clear to everyone watching that the Glentoran approach was to avoid conceding. With attack often considered the best form of defence, Nadene Caldwell drove her troops on releasing Kelly and Andrews in quick succession, the latter forcing a fine save. Three consecutive corners signalled the home side’s intent. Then, a steal from Caldwell was followed by a quick pass to Andrews whose diagonal through-ball led to a Wade attempt on goal. A swift Reds attack on 53 called defender Shannon Dunne into action, alert as ever making a great covering tackle to avert the danger. Credit to the away side for trying to force the Glens into making defensive errors in an attempt to increase the pressure on Burns’ goal. Quite simply, the back four did not want to concede anything. Special mention again this week goes to the emerging Cara Mervyn whose fearless attitude and composure on the ball won her many plaudits in the post-match punditry. Erin Montgomery replaced Louise McDaniel for the away side on 60 minutes, fresh legs for the last half hour. The Glens followed suit with Ali McMaster replacing Sam Kelly soon afterwards. The impact was immediate with McMaster forcing a corner just seconds into the action, crossing into the box soon after and then back defending deep in her own penalty box, all within minutes of her introduction to the action. Glentoran struck the bar for the second time in the game on 75 minutes, a glorious chance for Maxwell to open her account for the evening with a clean strike that rebounded firmly off the crossbar. Maxwell eventually made way for striker Rachel Rogan on 78 minutes as Beattie dropped back into midfield and McMaster occupied the right flank for the remainder of the contest. Cliftonville gave themselves a lifeline on 79 after fine play from McGuinness allowed Callaghan to convert to reduce the deficit. A disputed disallowed goal from Wade after a clever ball from Andrews was quickly forgotten, however, as Rogan’s perfect cut-back allowed Beattie to take the ball in her stride just minutes after, jink past a defender and rifle the ball into the net to complete the rout for the rampant Glens.

What a performance! Focused throughout and disciplined in their respective roles, the players in green, red and black finished the game very worthy winners. A quick turnaround means a trip to Seaview on Sunday to take on a well organised Crusaders outfit in what is traditionally a very close contest between two sides with distinctly different styles. Let’s go again, Glens! 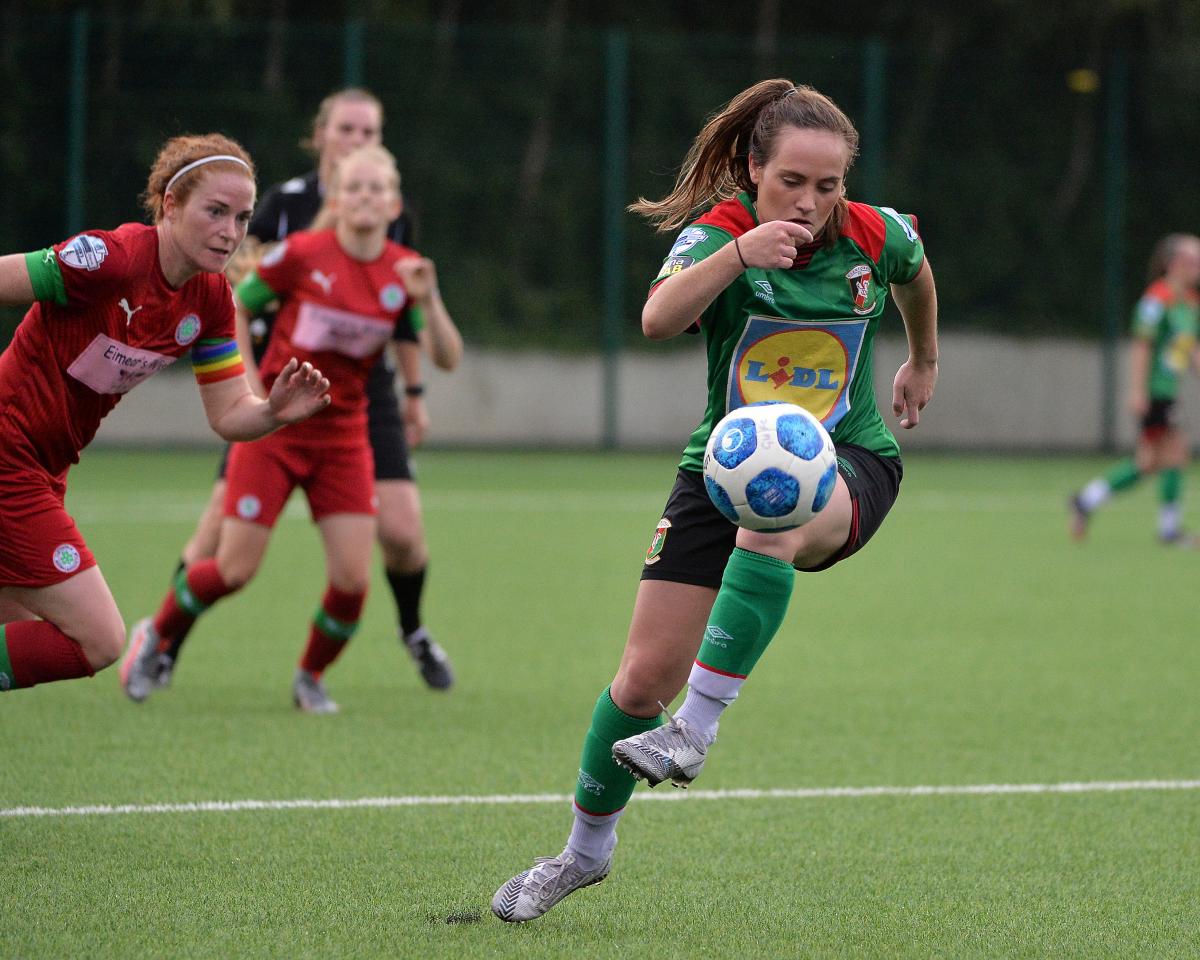 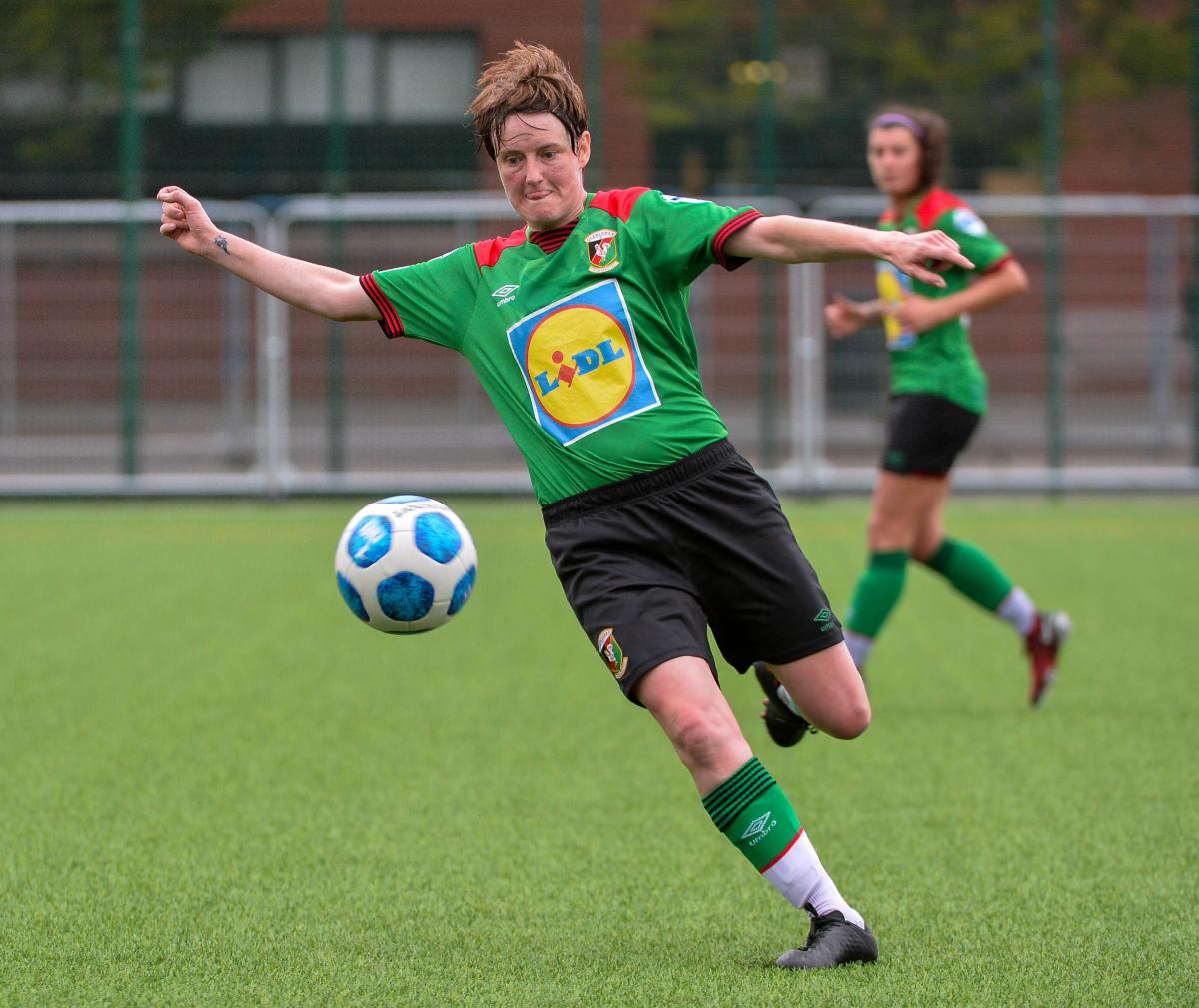