Glentoran secured another 3 points in tonight's Danske Bank Premiership game with a 4-2 victory over Dungannon Swifts and in doing so made absolutely certain of their European play-off spot. 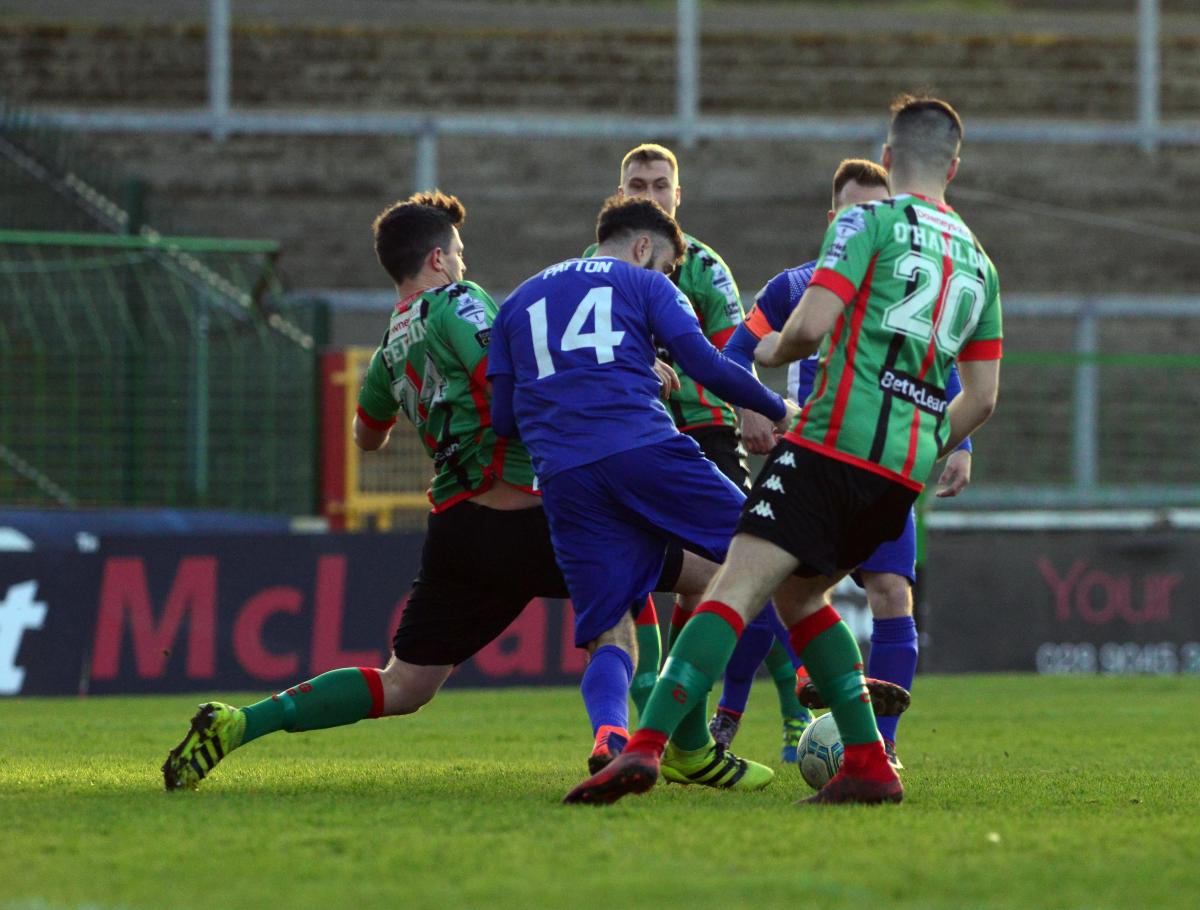 The game started slowly with neither side creating much. That was until the 9th minute when Daniel Hughes went through on goal only to be denied by a superb save by Elliott Morris. The ball broke to Mark Patton but Morris turned away his first effort and then saw his follow up fly wide of the goal. On 21 minutes Glentoran made the breakthrough. John McGuigan, who had an excellent game, chased what looked like a lost cause and his persistence forced a corner kick. McGuigan took it himself and found the head of James Ferrin and his powerful header gave Stuart Addis no chance. It was Ferrin's first goal of the season and his second overall for the Glens. 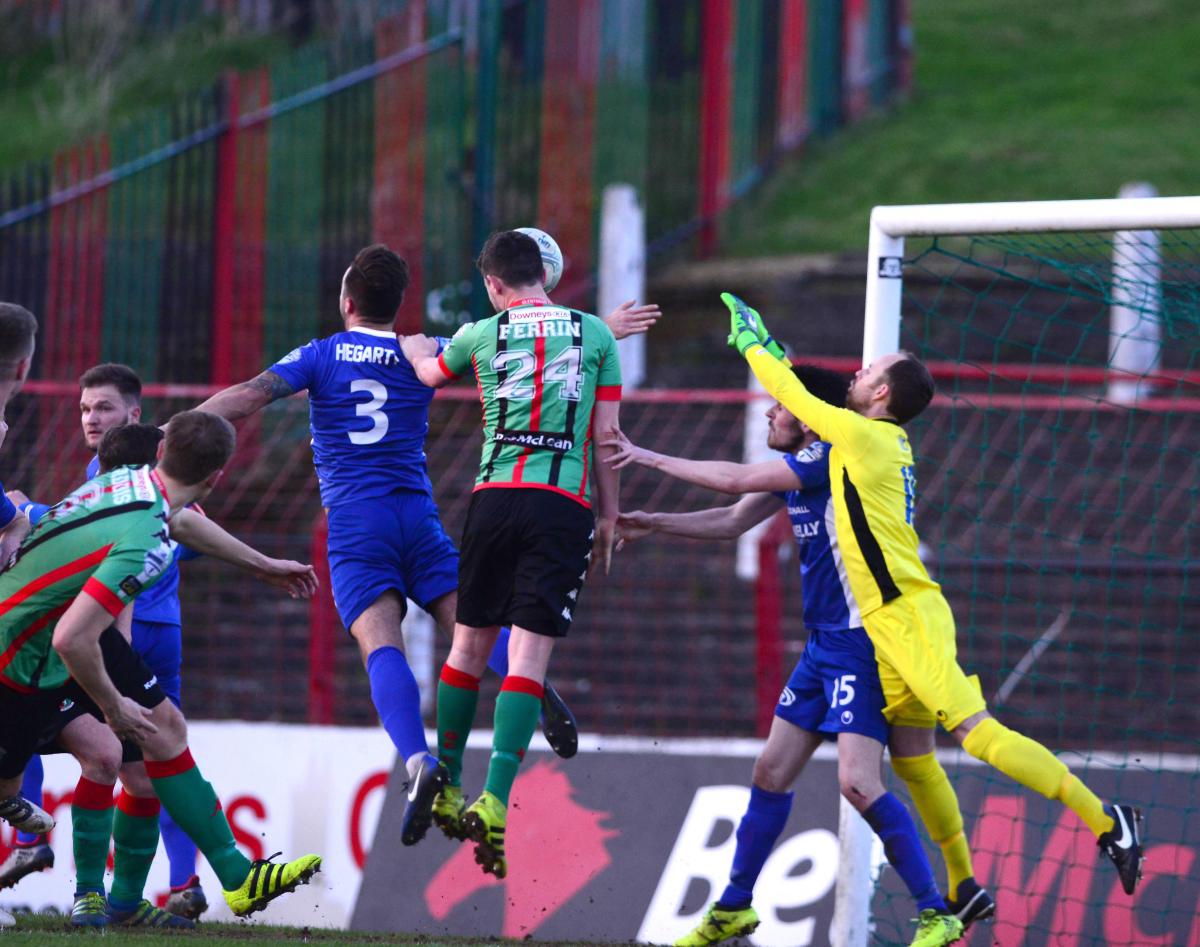 A minute later and the Swifts levelled in a rather fortunate manner. A long range shot from Douglas Wilson was going nowhere but hit Daniel Hughes. He brought the ball under control and slotted it past Morris. 5 minutes later the Glens should have been back in front. McGuigan found Allen at the back post and he in turn fed James knowles. The midfielder's shot looked goal bound until Addis produced an excellent stop. The Glens weren't to be denied though and on 30 minutes went back in front. Curtis Allen was fouled in the 'D' and took the free kick himself. The ball struck the wall but fell to John McGuigan. McGuigan side stepped the nearest defender and drilled a low shot past Addis and into the Sydenham End goal to make it 2-1. 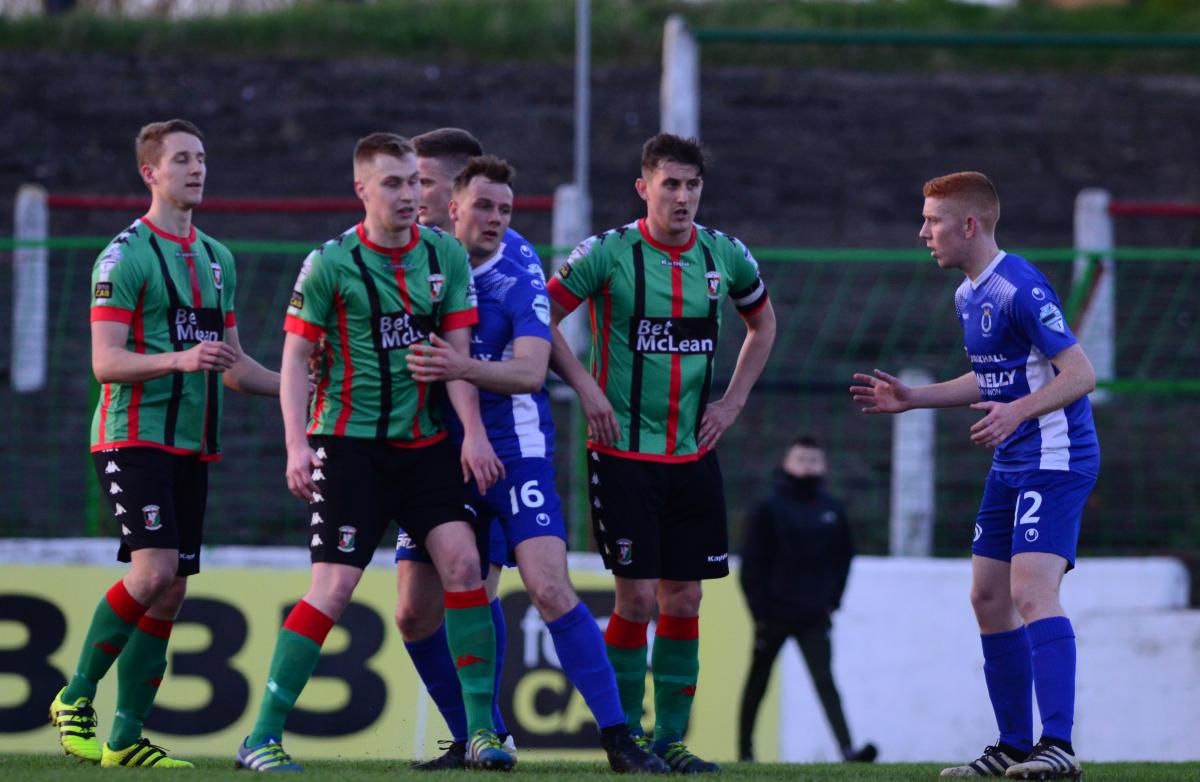 On 37 minutes we witnessed an absolutely shocking tackle by Douglas Wilson who went straight through the back of Marcus Kane. Referee Andrews produced a yellow card but the Dungannon Swifts player couldn't have had any complaint had it been a straight red! Jonny Addis took the free kick and his long ball was flicked on by McGuigan to Curtis Allen who smashed it home with his right foot! Half-time: Glentoran 3-1 Dungannon Swifts. 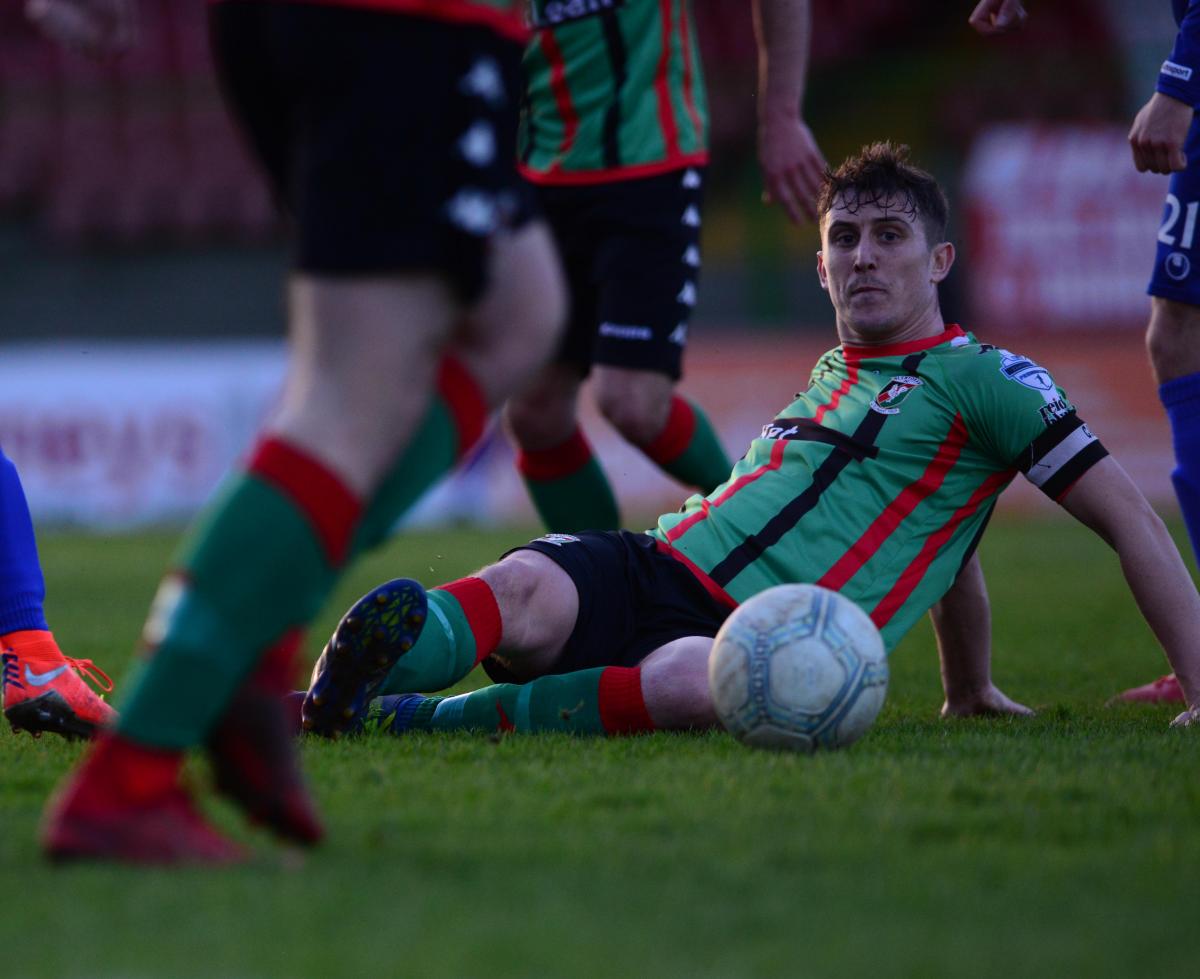 Calum Birney almost extended the Glens advantage in the first minute of the second half but just failed to connect properly with John McGuigan's corner. 8 minutes into the second period and the Swifts pulled a goal back. A high ball into the Glentoran penalty area wasn't dealt with and it was eventually headed home from close range by Christopher Hegarty. On 55 minutes the visitors thought they'd levelled when Jarlath O'Rourke's diving header flew past Elliott Morris but the assistant referee determined that the Swifts left back was offside. A close call! Just after the hour mark Hegarty kiccked out at John McGuigan long after the ball had gone. The referee issued yellow cards to both players with the home support bemused at how Hegarty stayed on the field! On 67 minutes a mistake by James Knowles resulted in a free kick to Dungannon. Daniel Hughes took it but saw his 25 yard effort hit the bar. 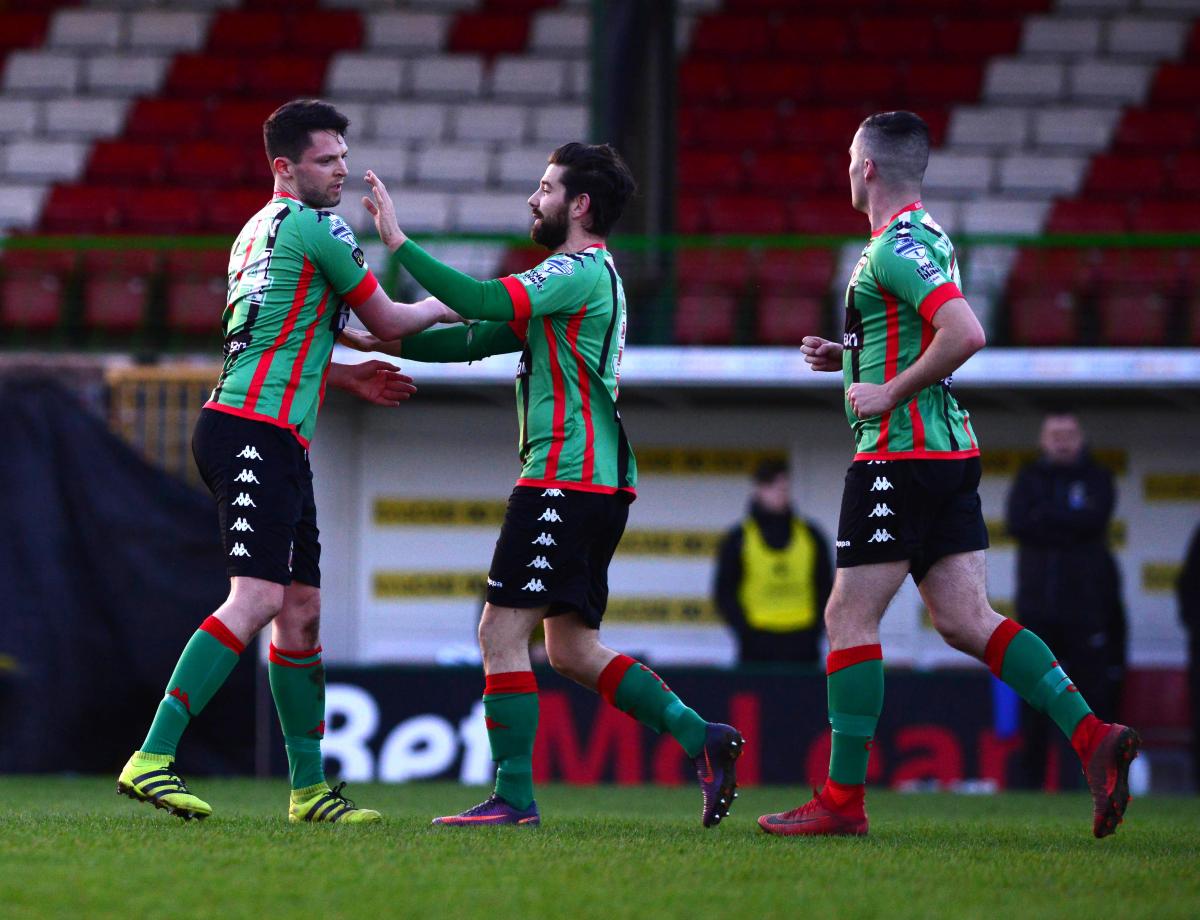 With 12 minutes remaining the Glens wrapped up the points and again it was that man McGuigan involved. He drove in from the right and cut the ball back for Curtis Allen to net his 24th of the season. Unfortunately McGuigan then had to be replaced due to a slight groin injury. In the closing minutes Seanean Clucas and another Swifts player committed what can only be described as an assault on Curtis Allen after the ball had gone. Other players ran to get involved it what turned out to be quite an ugly skirmish. Referee Andrews opted to send both Clucas and Allen off but it was difficult to see what Allen did wrong other than try to prevent himself being assaulted! 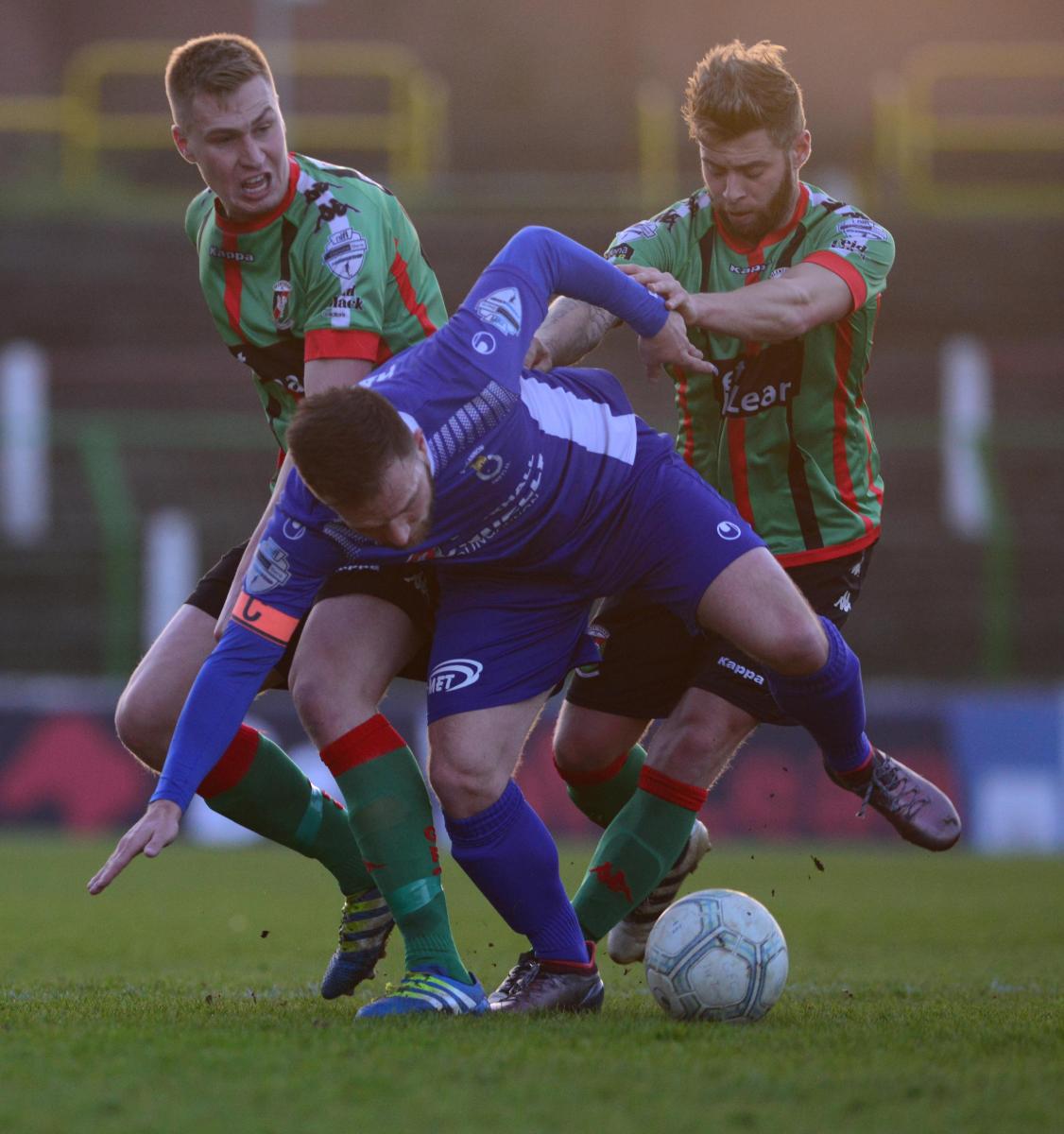 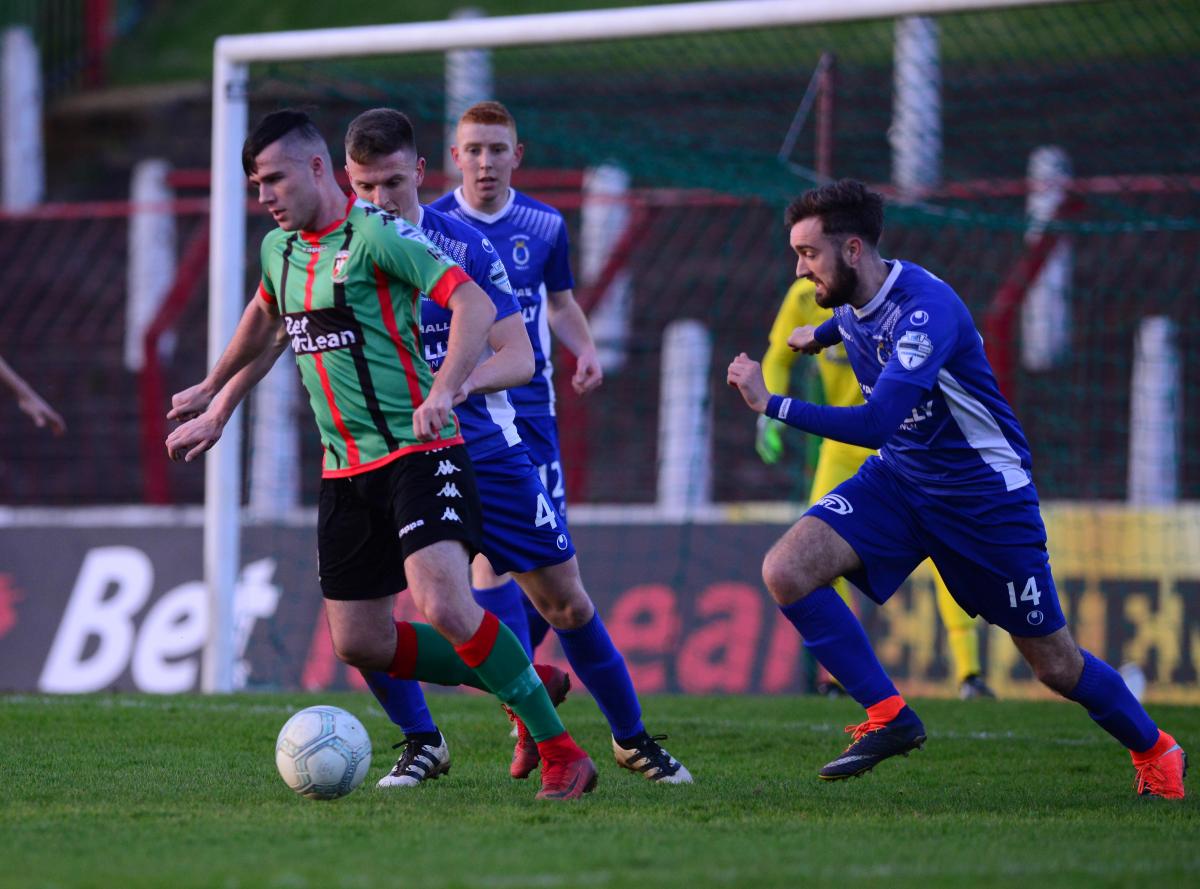