Glentoran welcomed Crumlin Star to the Oval for a County Antrim Shield 1st Round tie on Tuesday night and ran out 4-2 winners. The visitors are the current NAFL Premiership Champions and whilst Glentoran dominated the first 45, the amateur league side gave a good account of themselves in the second half, testing the youthful Glentoran side.  Gary Haveron made 11 changes from the side which worked hard in overcoming Ballymena at the weekend but the side he fielded did not lack first team experience, particularly in the middle of the park. Deadline day signing Eoghan McCawl made his first Glentoran start in the midfield. 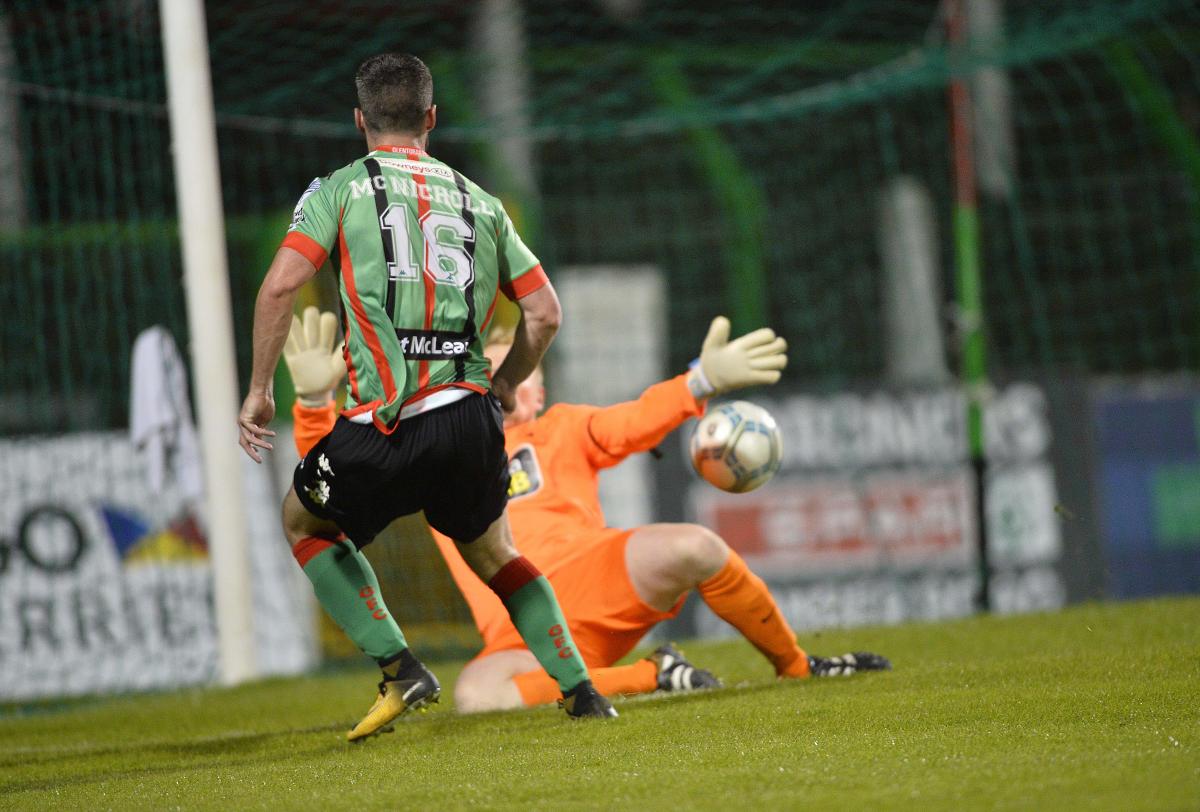 Glentoran started brightly, within seconds Conal Delaney burst down the right wing beating three defenders but his cut back was cut out before Jonny Smith could reach it. Glentoran enjoyed plenty of early possession focusing on the wings, Tiernan McNicholl latched onto a long ball from Foley and did brilliantly to jink inside two defenders but like Delaney before, his low cross found a white shirt rather than an attacker.  After 10 minutes the visitors had their first foray into the final third when from a corner Niall Hawkins had a looping header easily held by Dwayne Nelson but this was a rare break in Glentoran’s first half pressure. Stevie Gordon went close twice from good crosses by Foley and Delaney and it was clear a goal was coming. 20 minutes in, Glentoran found the breakthrough. Conal Delaney did well to ride a high challenge in the centre circle, he then powered away from the chasing midfield before slipping the ball through the defence for Tiernan McNicholl to calmly clip the ball over the sliding goalkeeper Ciaran McNeill to give the Glens the lead. 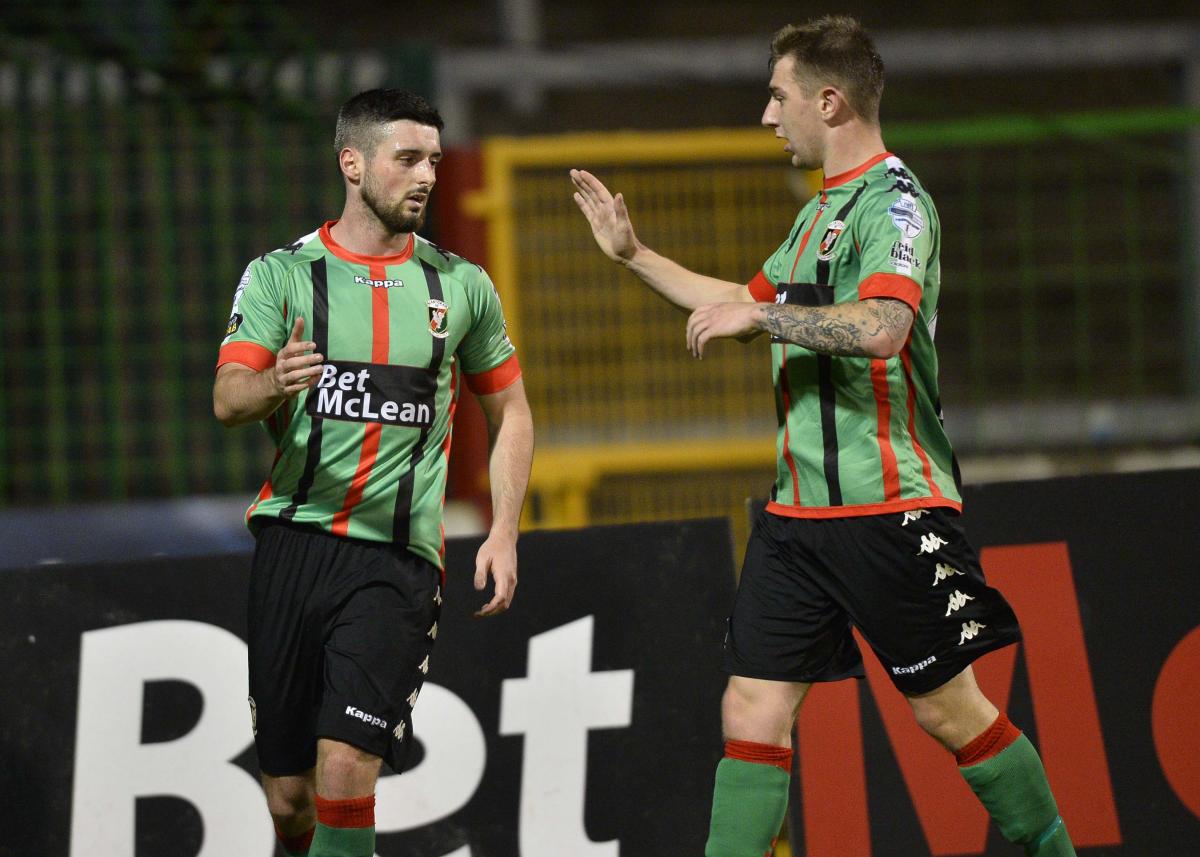 Two minutes later Eric Foley played Smith in behind the visitors defence but this time McNeill denied Glentoran with a smart stop. The visitors then began to settle and had a half-hearted penalty claim waved away as Halfpenny was adjudged to have gone down too easily in a battle with Dan Kelly. Minutes later Star went close as Prigent curled a free kick a few yards wide of Nelson’s goal. Just as they began to settle, Glentoran upped the tempo and assumed control. Ten minutes before half time a long ball over the top led to a race between Smith and the visitors keeper McNeill, McNeill won the race heading clear but his header fell to Stevie Gordon who settled himself and lobbed over stranded keeper but sadly for Gordon a Star defender managed to get back and head the ball off the goalline. A minute later Gordon got his goal, McNicholl did brilliantly to cross from the left, centre back Berne headed clear but straight to Gordon who drilled the ball low into the net from 20 yards. A rare long range goal for Steven! 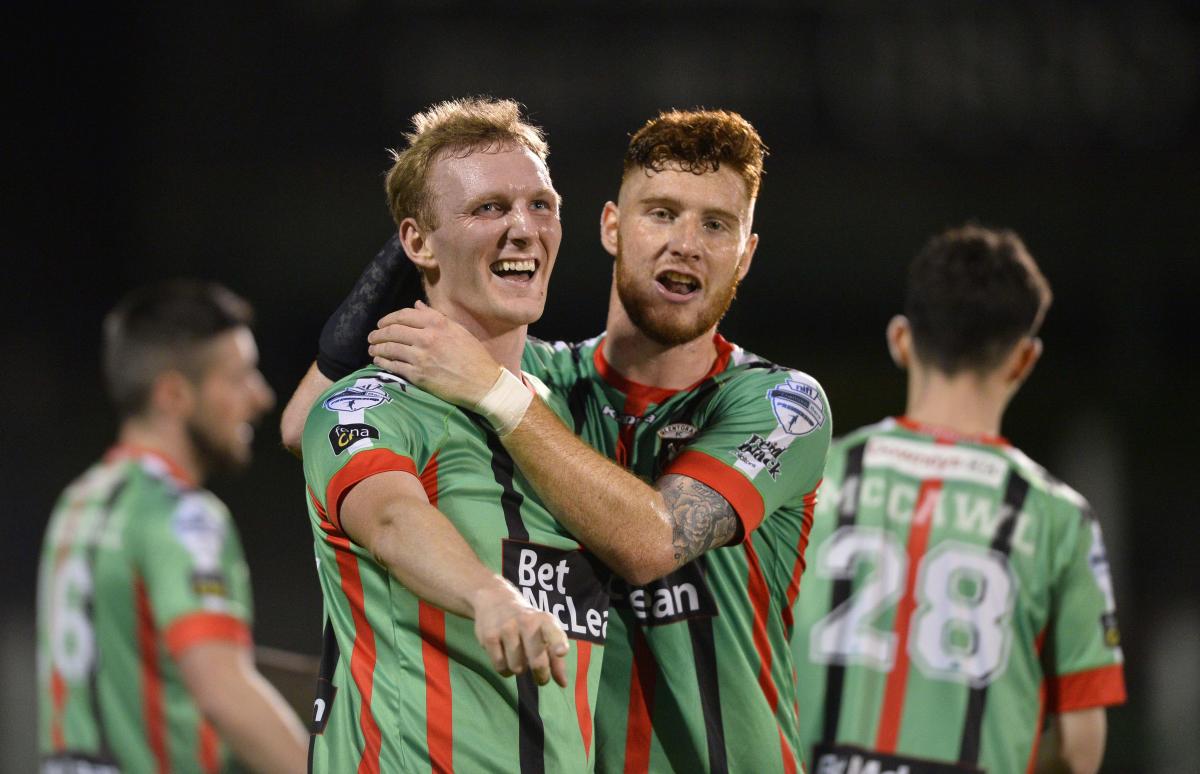 Just before halftime the home side looked to have sewn up the tie as the unmarked Jonny Smith headed a Foley free kick beyond the keeper to make it 3-0. However right on the whistle the visitors should have levelled when a loose Dwayne Nelson pass presented Gary Lavery the ball on the penalty spot with an unguarded goal. The Star striker couldn’t control quick enough however as Nelson dived on Lavery’s loose touch, redeeming himself. Half Time - Glentoran 3-0 Crumlin Star. 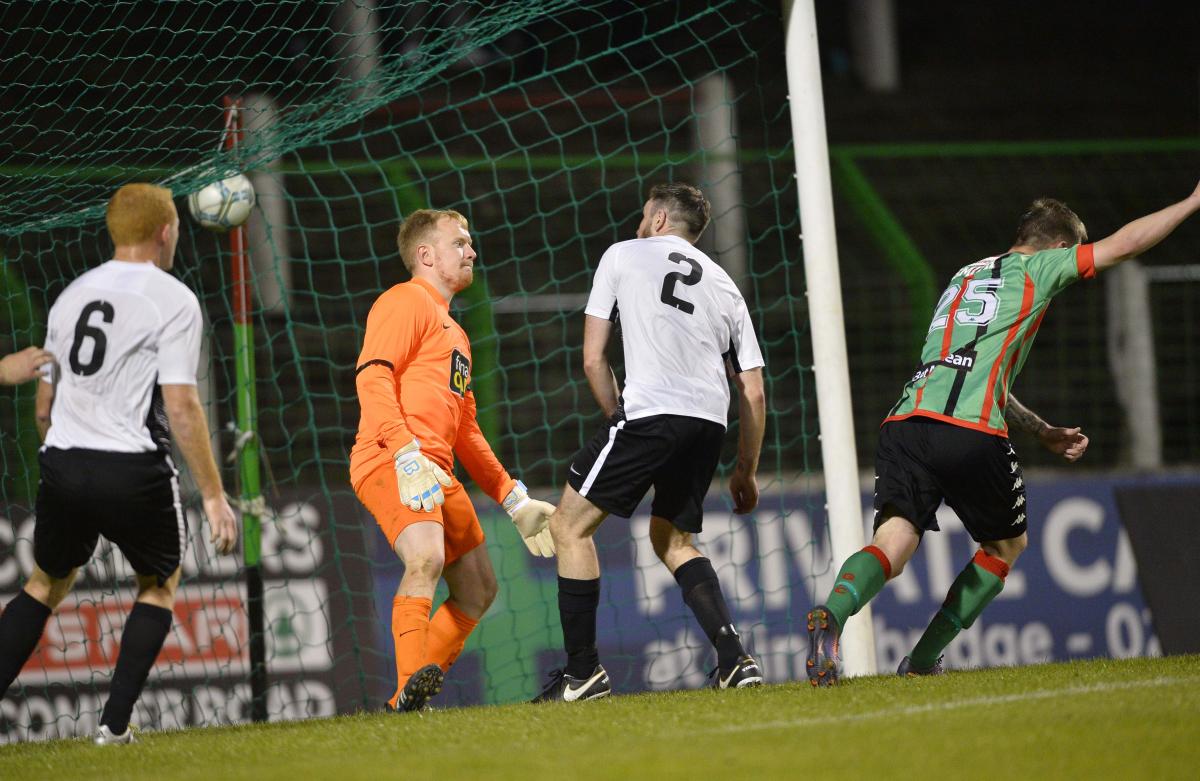 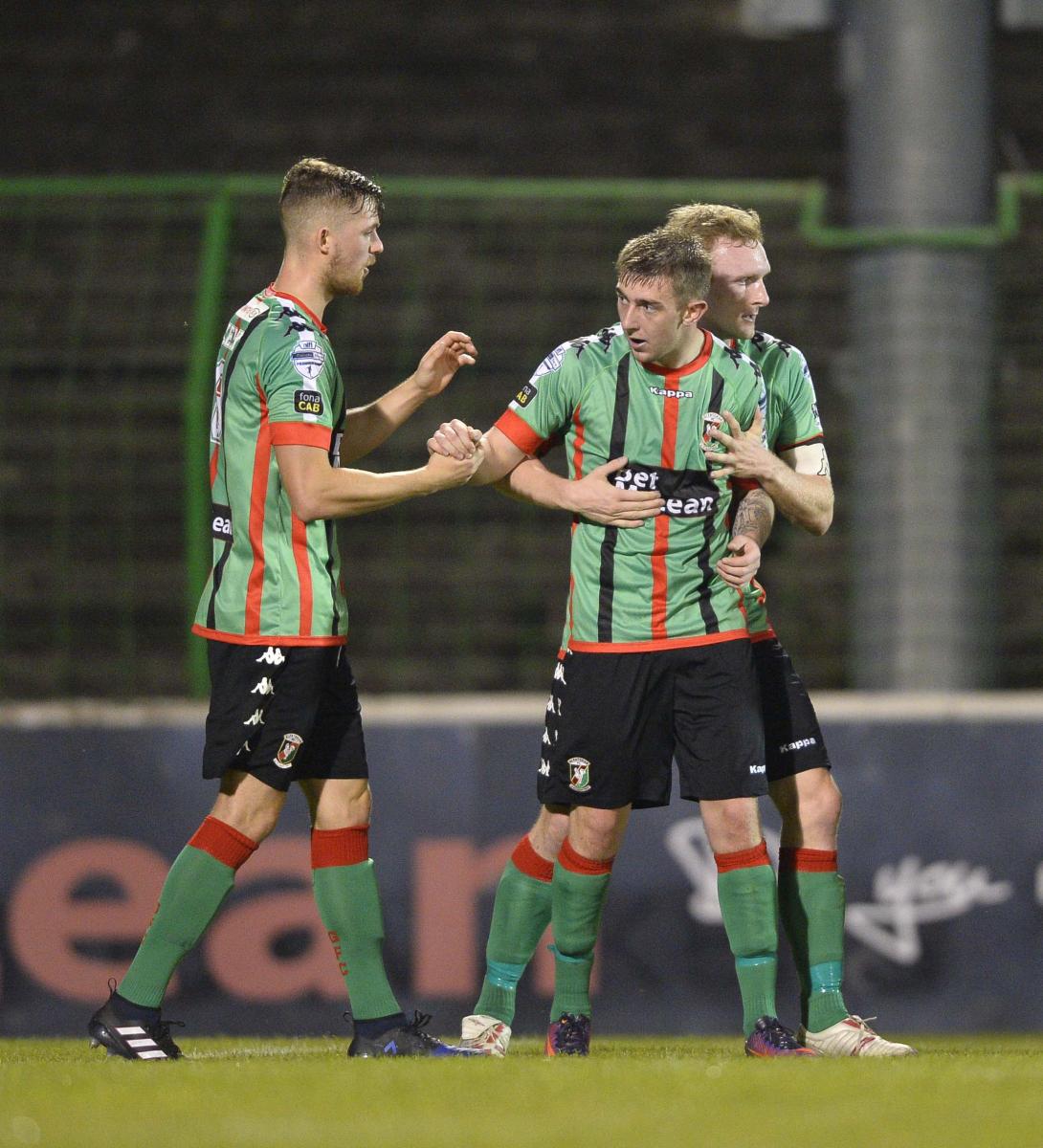 Inside the first minute of the second have Crumlin striker Lavery made amends for the earlier chance as he score a stunning 35 yard free kick, his strike whistling past Nelson into the top corner to make it 3-1, a superb strike from the former Fleetwood and Cardiff player. The goal sparked Crumlin Star and they began to create chances, McKervey threatened with a couple of crosses, one of which saw Trainor and Prigent perhaps get in each other’s way when they each had a free header. Thankfully for the Glens a counter attack 10 minutes into the half ended the tie, Kym Nelson who had a busy night surging forward from left back found the impressive Eoghan McCawl. McCawl glided by a defender and shaped a lovely curling shot into the bottom right corner of the net, his first goal for Glentoran. The glens almost added a fifth on several occasions with Nelson almost forcing an own goal and Foley shooting 5 yards wide from the halfway line. However on the hour mark the visitors scored a second, Gary Lavery again with an even better strike. The young forward picked up the ball in what looked to be a harmless position, more than 30 yards out wide on the left but he looked up and slammed a shot across Nelson into the far top corner of the net, rightly earning applause from the home crowd. 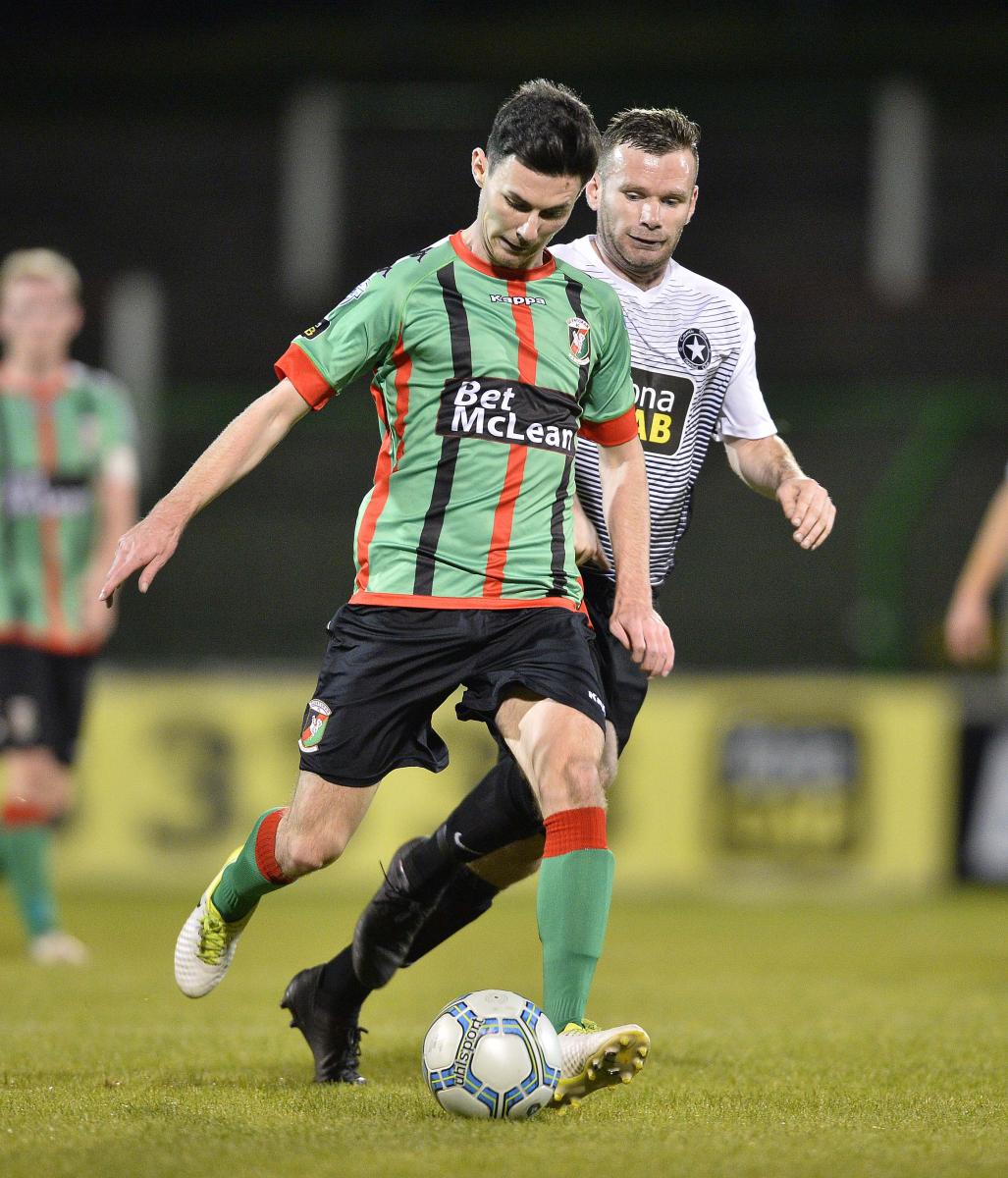 From this point on the visitors were the better team as Glentoran lost their spark but in truth they rarely troubled Nelson. Lavery had a half chance to secure a hat-trick and Gordon went close again for Glentoran as the game petered out in the final 20 minutes. The final action of note was the award of a very soft penalty as left back McNeill appeared to run into James Ferrin after losing control, much to the surprise of many referee Gregg pointed to the spot. However former Carrick man Miguel Chines blazed his penalty over the crossbar to leave the final score Glentoran 4-2 Crumlin Star.

Glentoran safely through to the last 8 overcoming a good second half from the visitors, Gary Haveron will look to continue our good start to the season when Coleraine bring their 100 percent record to The Oval on Saturday. 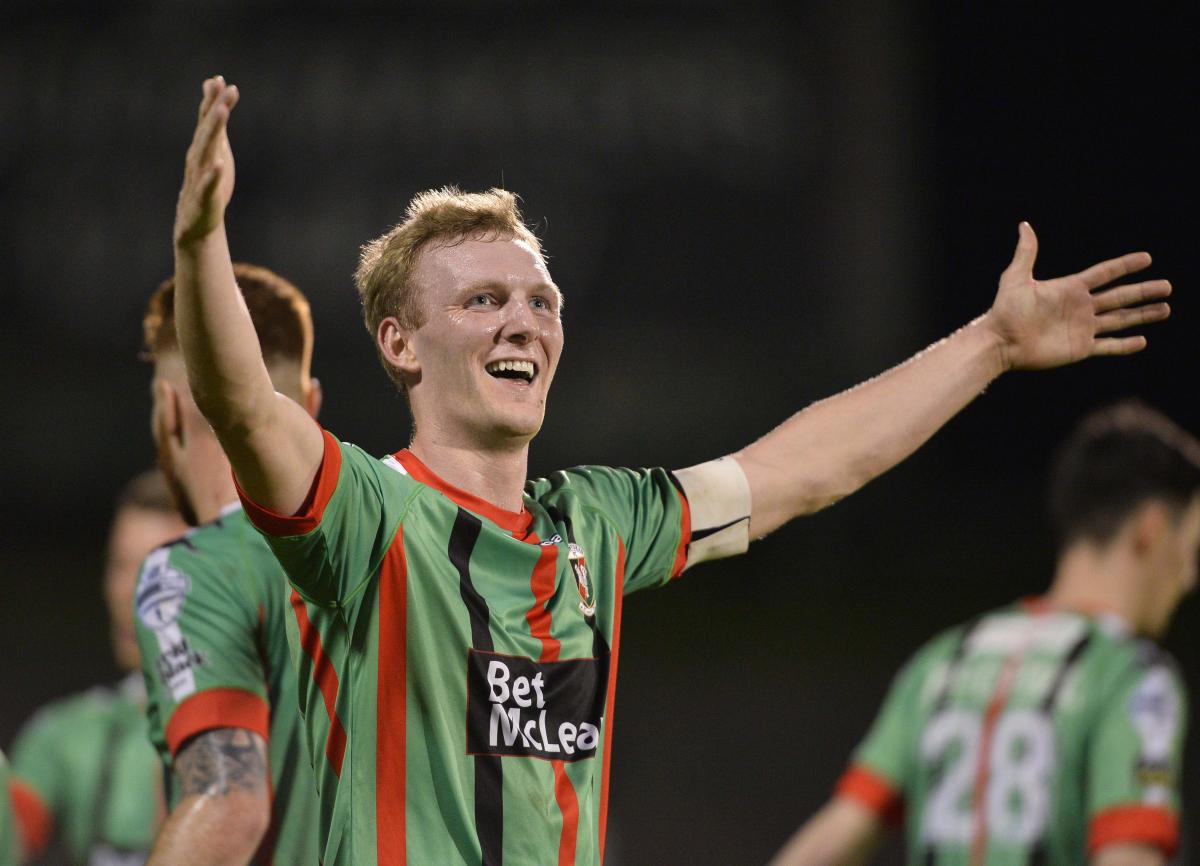