Glentoran beat Coleraine on penalties to reach the Quarter Finals of the Bet McLean League Cup after a 3-3 draw on Tuesday night at The Oval. Joe Crowe netted the decisive spot kick following a back and forth game in which both sides had periods of dominance. The Glens made one change to the side which beat Ards 4-0 on Saturday with Dylan Davidson making way for Conor Pepper, the energetic midfielder returning after a groin problem. On a crisp night at The Oval the opening 45 minutes proved to be a cagey affair as both teams looked hesitant and reluctant to leave themselves exposed to attacks, perhaps symptomatic of the recent run of results both teams have endured. Glentoran however were perhaps unlucky in a few of those games and showed some early promise when Allen shot over following a good piece of composure and control and Ross Redman fired a free kick agonisingly across goal. 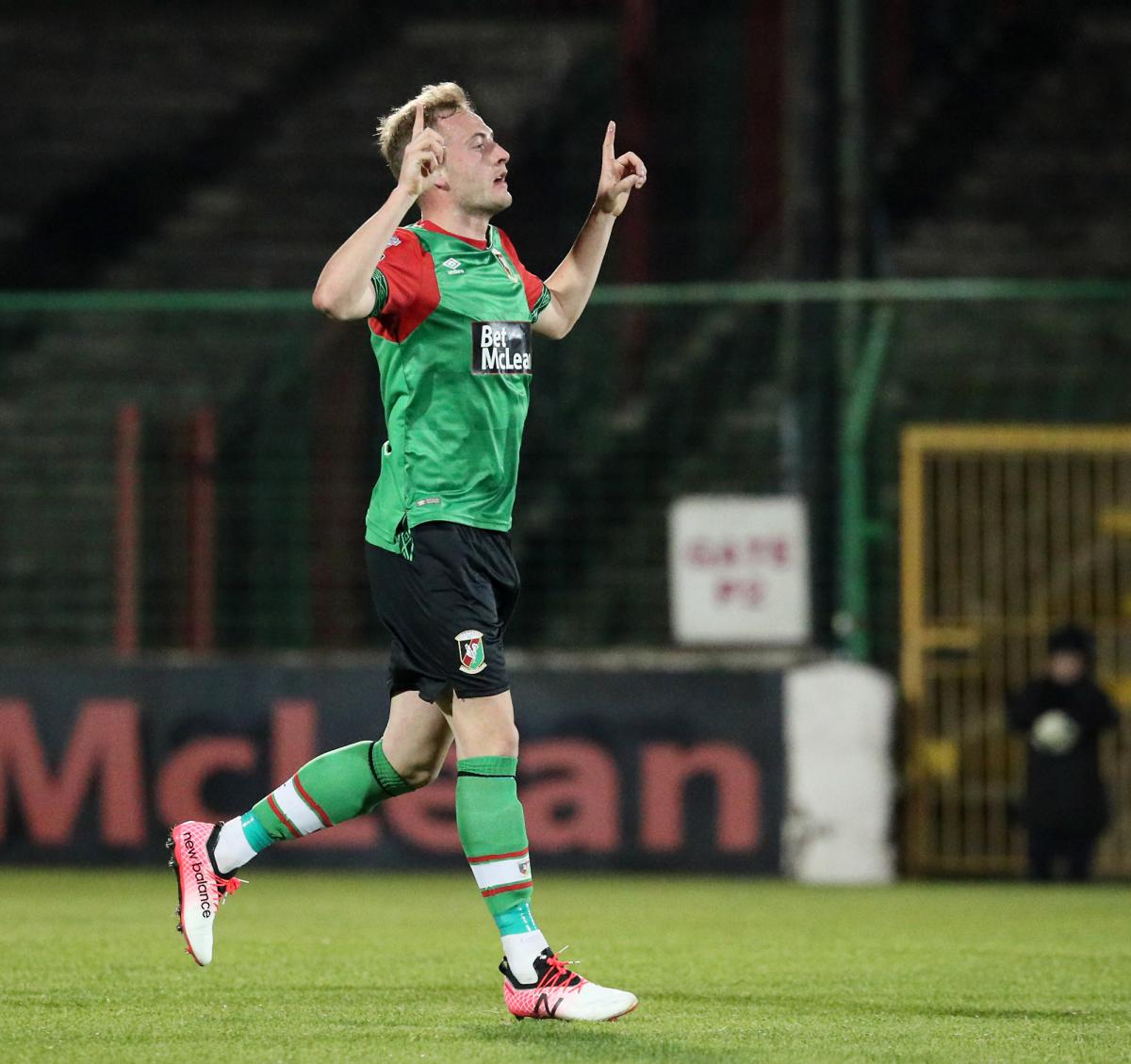 However with their first real attack of the game Coleraine struck the opening blow after 22 minutes. Former Ipswich winger Josh Carson’s whipped free kick evaded all runners and nestled in the far corner of the net leaving Elliott Morris stranded in the home goal. Glentoran immediately showed some character and levelled almost instantly, John Herron’s 25 yard free kick deflected off Coleraine's Aaron Burns and wrongfooted Chris Johns who could only watch it loop beyond him and into the net for the Glentoran leveller. Following the flurry of goals the game settled down with long range drives from Harkin and Chris Gallagher the only real efforts of note. That was until just before half time when Marcus Kane found John Herron with a lobbed through ball, Herron did brilliantly to turn inside two defenders and lay the ball off for Allen but Curtis will have been disappointed to fail to hit the target from 20 yards. Right on half time there was a potential flashpoint as what looked a high challenge from Harkin on Herron went unpunished. Herron, perhaps with his dubious red card of a few weeks prior on his mind, was incensed but the break arrived at the perfect time to calm the tensions. Half Time Glentoran 1-1 Coleraine. 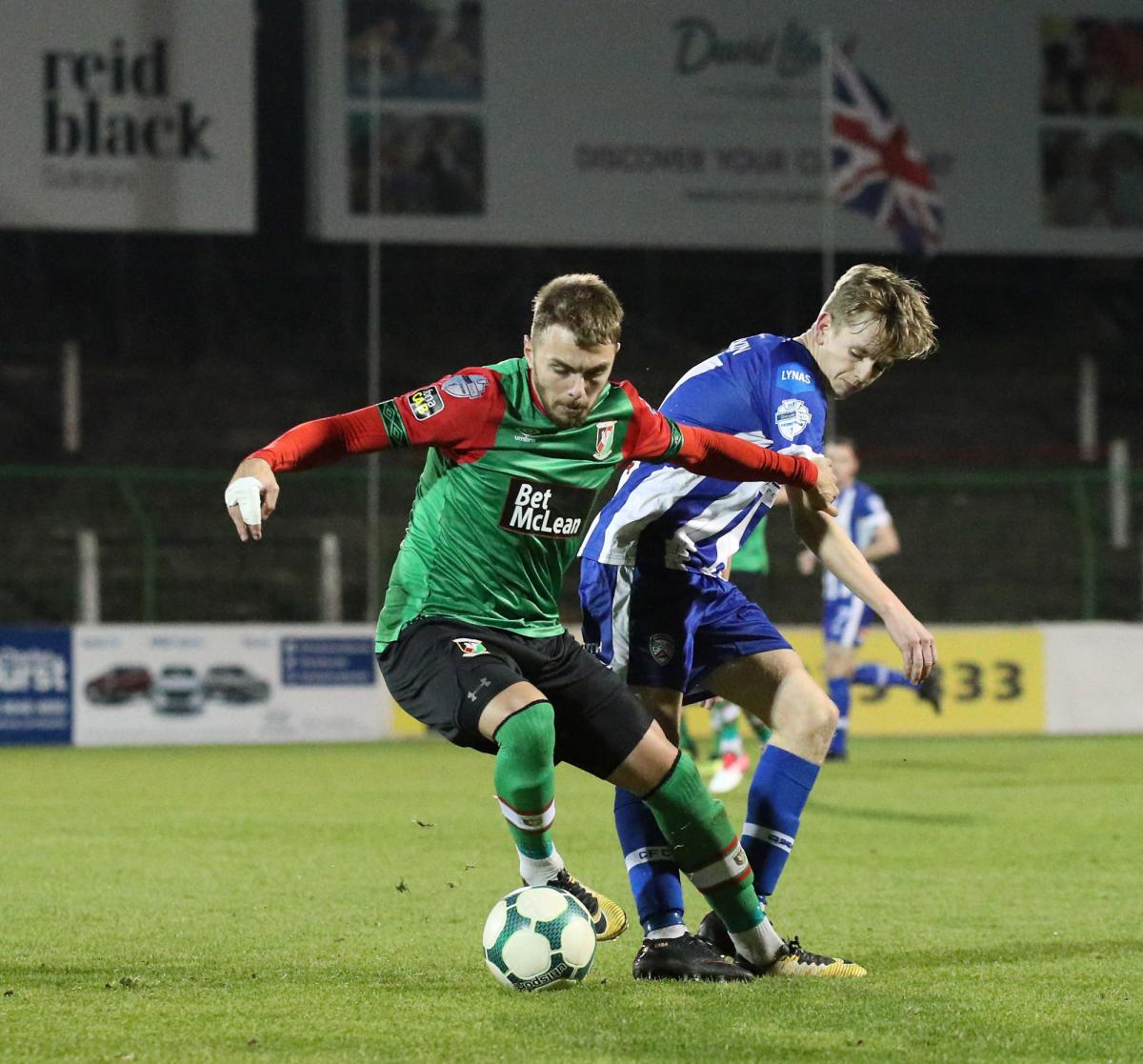 The second half started in a similar cagey way to the first but 10 minutes in, it erupted into a series of chances as the game became unusually stretched and within a five minute spell both teams had several good goal scoring chances. Firstly Robbie McDaid flashed a cross just out of the reach of Allen, Josh Carson then forced Elliot Morris into a low save and Morris had to claw a mis-hit Eoin Bradley cross over the bar. Aaron Burns then wasted a glorious chance volleying over the Glentoran bar from the resulting corner and Conor Pepper immediately missed a similar opportunity at the other end after a brilliant piece of strength and cross from the lively McDaid.  Following this frantic spell the game calmed down but after 20 minutes of the second half Glentoran were in front, Herron found Nathan Kerr with an excellent cross field ball and Kerr hit an even better cross to find Curtis Allen, Curtis expertly peeled off the shoulder of his marker and planted a header beyond Chris Johns to give Glentoran the lead. 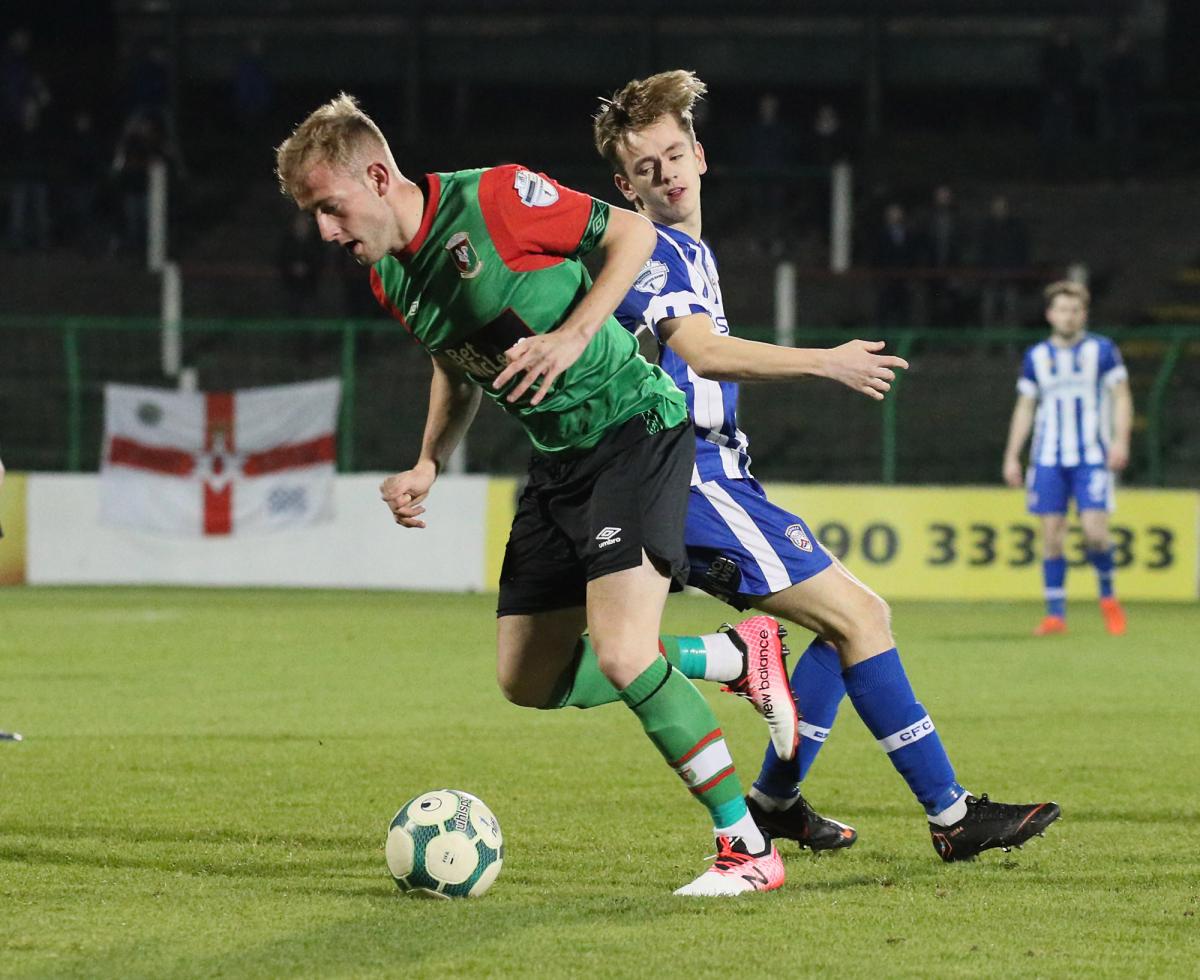 At this point Glentoran seemed to sit back too deep and invite Coleraine on, they had been enjoying a good spell before the goal and perhaps the game was there to be killed off but the Bannsiders took the opportunity to pile on the pressure without creating overly much in the way of real clear cut chances. Aaron Burns forced Morris into a great low save after he was left unmarked in the area but until the introduction of Jamie McGonigle it looked like Glentoran were coping well. McGonigle immediately had an impact, testing Morris and then playing in McAuley to force another save. Just as Glentoran thought they were going to see out the 90 minutes Coleraine levelled in controversial circumstances, Eoin Bradley somehow managed to scramble the ball through to McGonigle who appeared to be in an offside position, but the flag stayed down, the Coleraine man finished his chance via the post and, following a conversation between referee Evan Boyce and his assistant, the goal was given, much to the obvious displeasure of several Glentoran players. End of 90 minutes Glentoran 2-2 Coleraine. 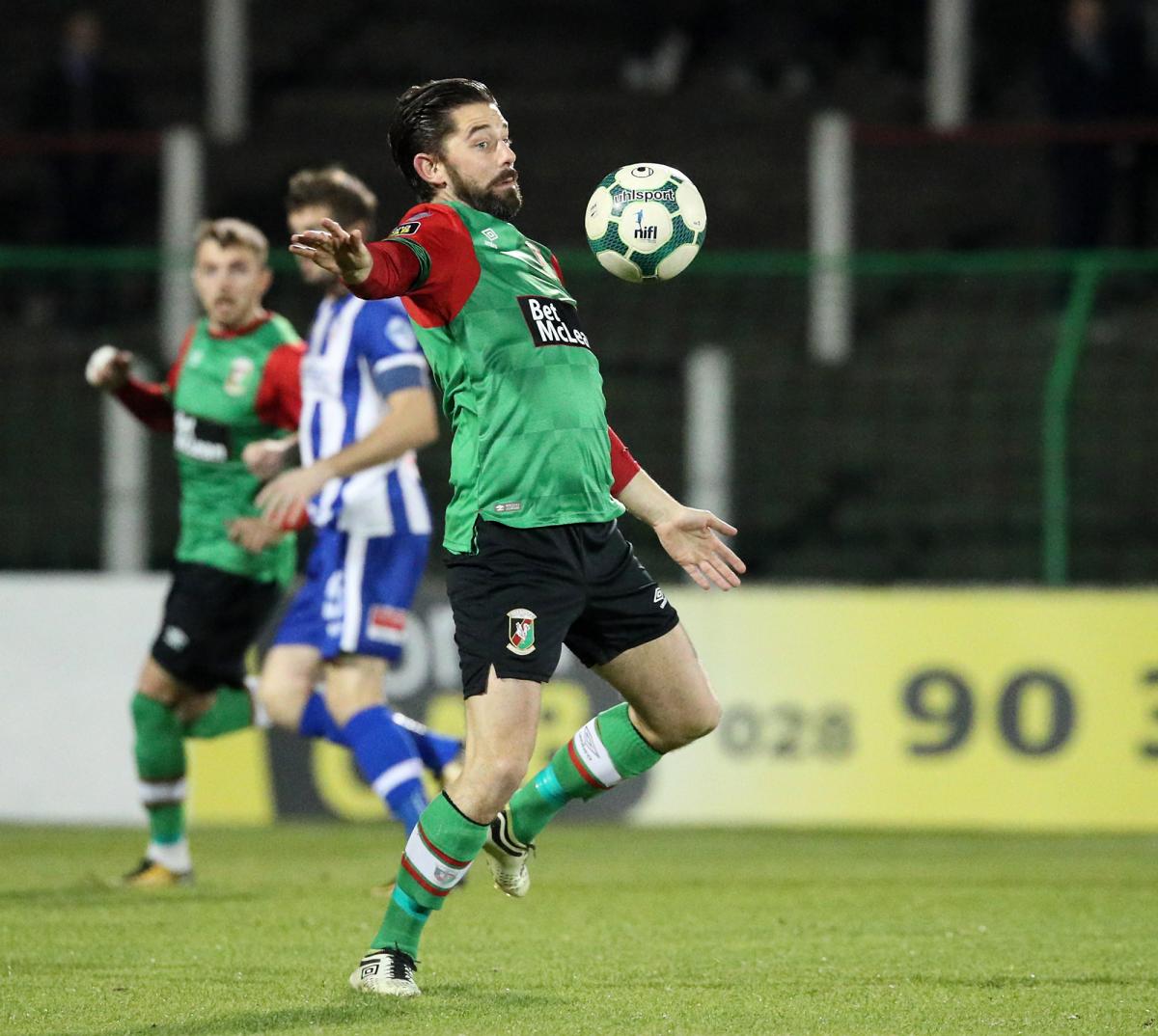 In the opening half of extra time both sides created chances, John Herron tried to play Allen in when he maybe should have shot, James Ferrin had a header hooked off the line by Adam Mullan whilst for the visitors McAuley blasted a shot over from 18 yards and McGonigle just failed to reach a clipped through ball having beaten the offside trap.

Inside the opening two minutes of the second extra period Coleraine were awarded a penalty, again much to the anger of Glentoran’s players. Eoin Bradley’s volley did appear to strike Ferrin on the arm but the centre back will have felt aggrieved due to the negligible distance he was from the shot. Regardless of the decision, McGonigle stepped up and buried his penalty to give the Bannsiders the lead again. However much like two hours previously, Glentoran levelled immediately. Ross Redman did magnificently to beat two defenders and work a low cross to Allen who turned the ball in to level the game again. In the remaining 10 minutes Stevie Gordon missed a chance stooping to head a superb Kerr cross agonisingly wide but there were to be no further goals and penalties were to decide the game. 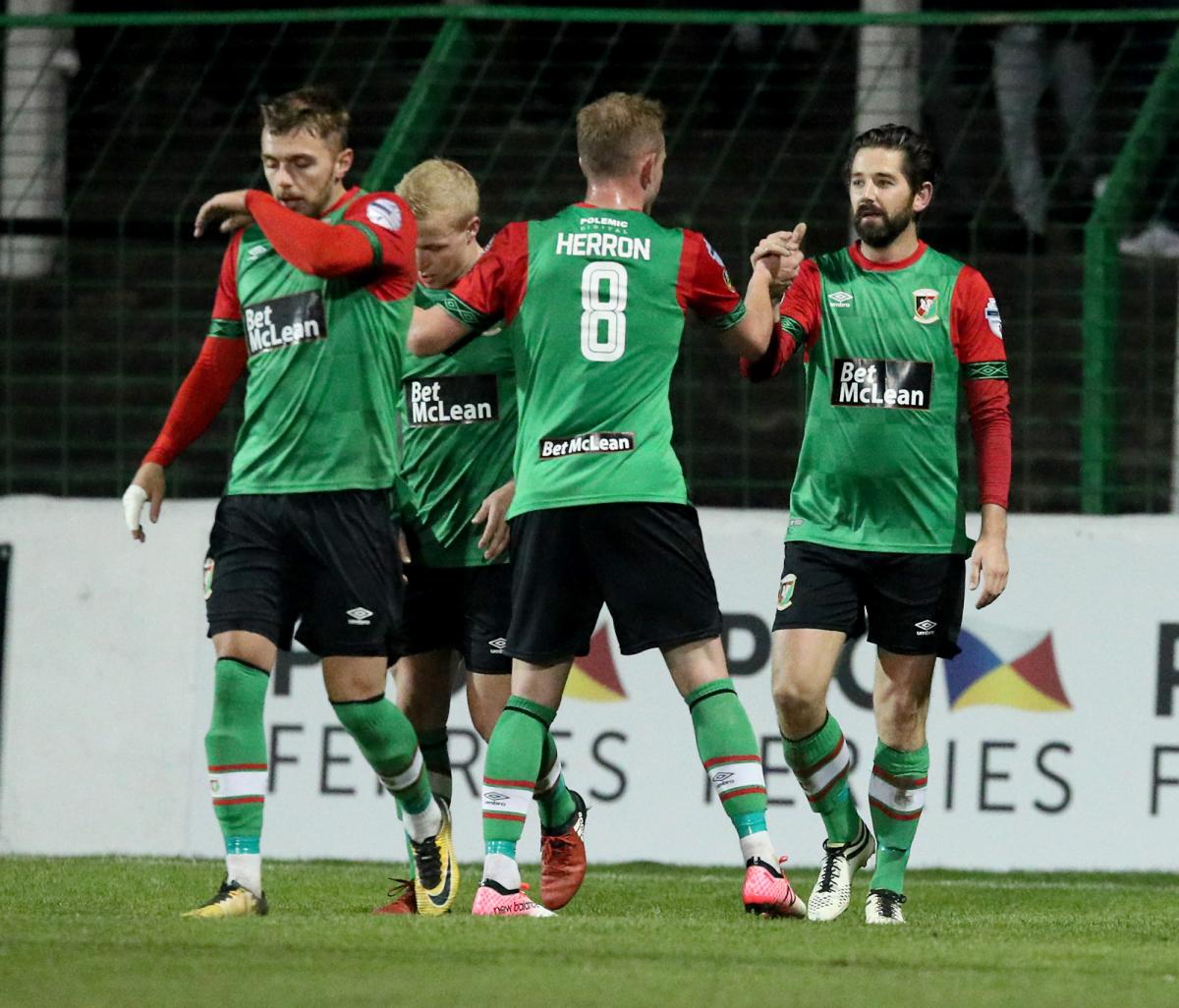 Lowry missed, over the bar 0-0

McGonigle scores 1-1 after 3 kicks each

Gallagher scores 2-2 after 4 kicks each

A welcome win after a hard night's work, Glentoran advance to face Crusaders in the last 8 of the completion and will look to build momentum as they travel to Solitude on Saturday to face Cliftonville. 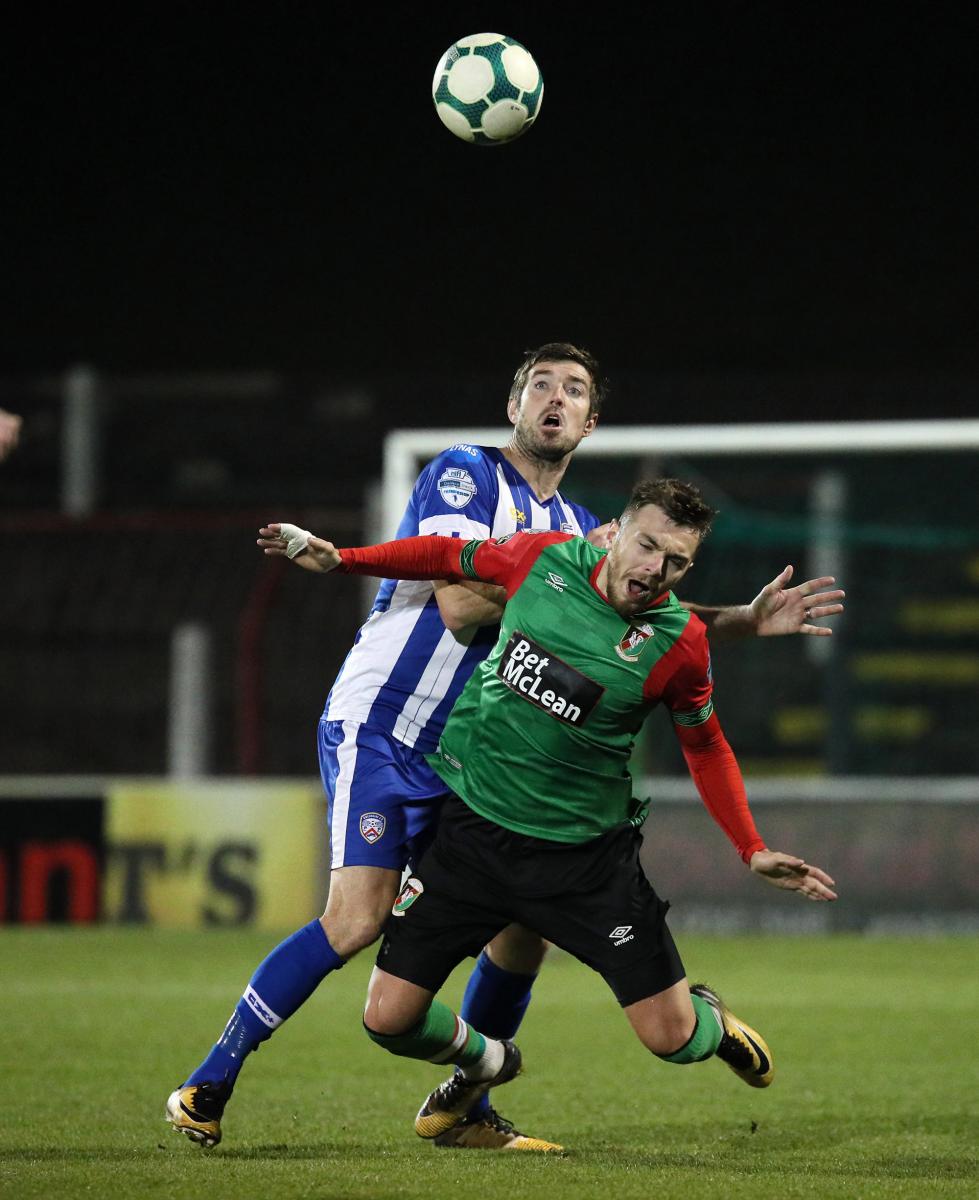