An extra-time winner from Dylan Davidson saw Glentoran advance to the Third round of the Bet McLean League Cup, seeing off Championship big spenders Larne at The Oval on Tuesday night. Davidson’s winner was enough to separate the sides after an entertaining game which also saw Robbie McDaid and Marcus Kane on target for the Glens, those goals coming in between Darren Stuart and Chris Ramsey goals for the visitors. 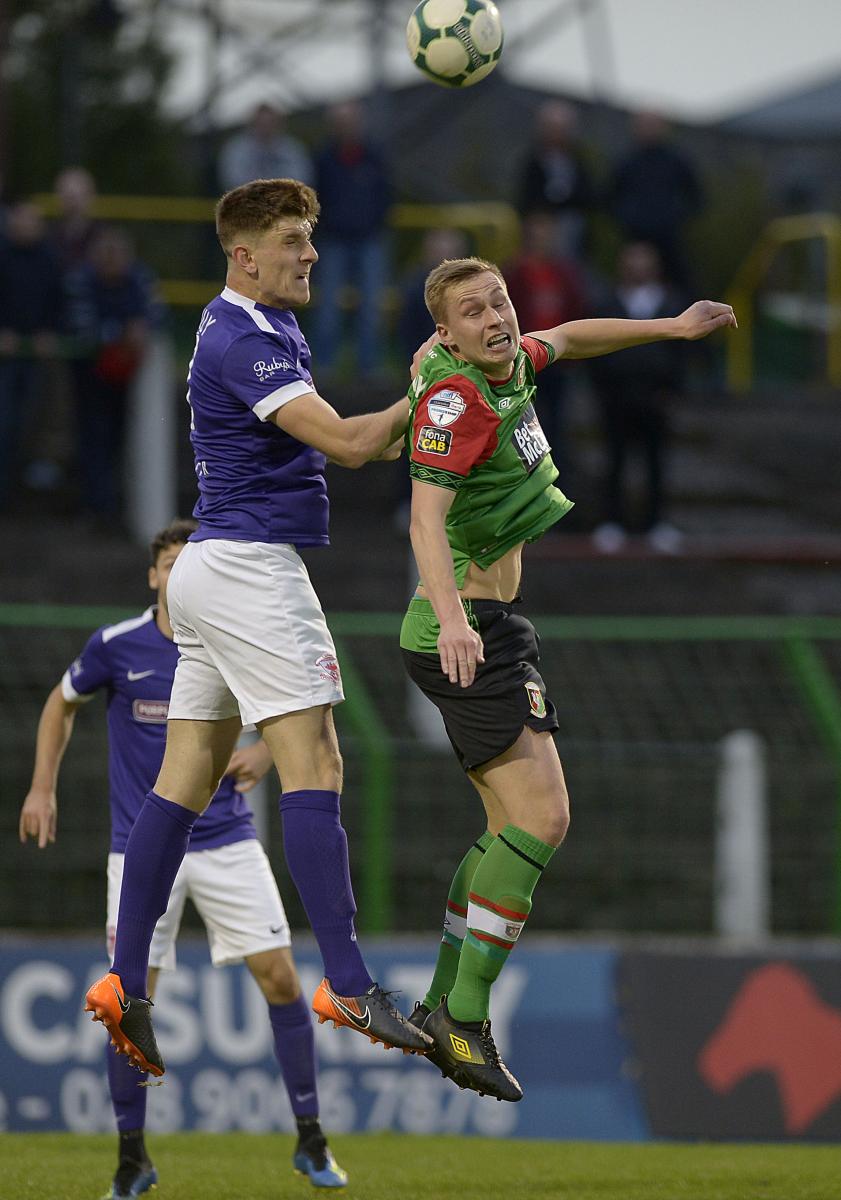 Glens manager Ronnie McFall made four changes to the side that beat Dungannon on Saturday with Joe Crowe, Stevie Gordon, Sam Byrne and Robbie McDaid coming in for Nathan Kerr, Peter McMahon, Dylan Davidson and Curtis Allen. A good crowd turned out for what was consensus pick for the tie of the round and indeed the game lived up to the billing. It was clear from the start that Larne were a slick outfit well up for the tie. In the opening minutes they fired in a warning as Cillin Gilmour flashed an early free header over the Glentoran bar. Gilmour wasn’t originally named in the starting lineup but replaced the injured Tommy Stewart just before kick off. Glentoran immediately responded at the other end when McDaid rattled the Larne crossbar, reacting well to Kane’s mistimed scissor kick. Indeed McDaid’s pace was proving troublesome for the Larne defence, drawing a couple of early free kicks but all in all the final ball was found to be lacking. 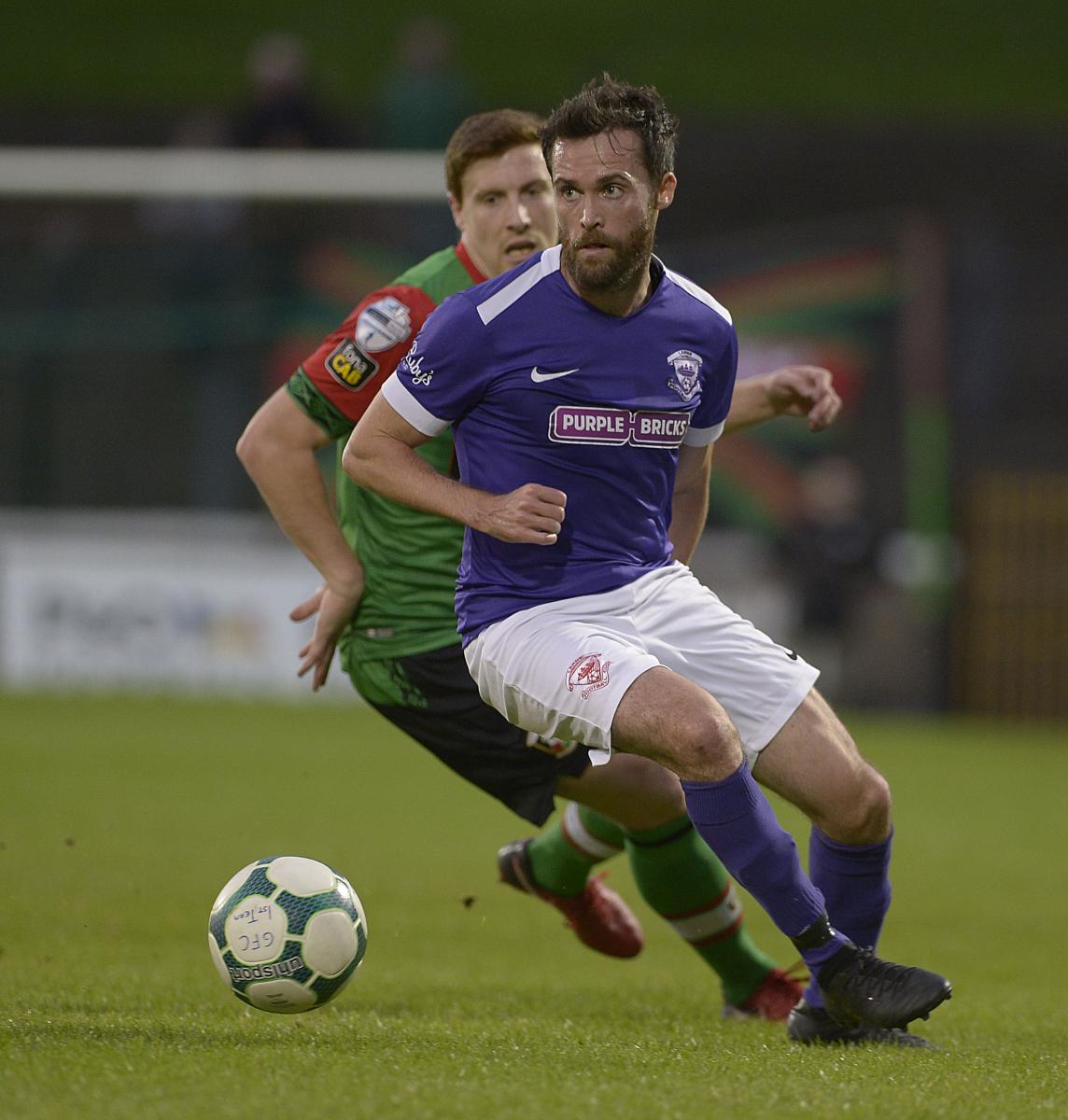 Glentoran continued their early pressure with a couple of corners and from the second Willie Garrett’s header was cleared off the line by a defender with Devlin beaten. Next it was Byrne who went close as Glentoran began to look comfortable. Joe Crowe played a magnificent ball right into the path of Marcus Kane and Kane’s low cross was just out of the reach of Byrne when any touch would have given Devlin problems. 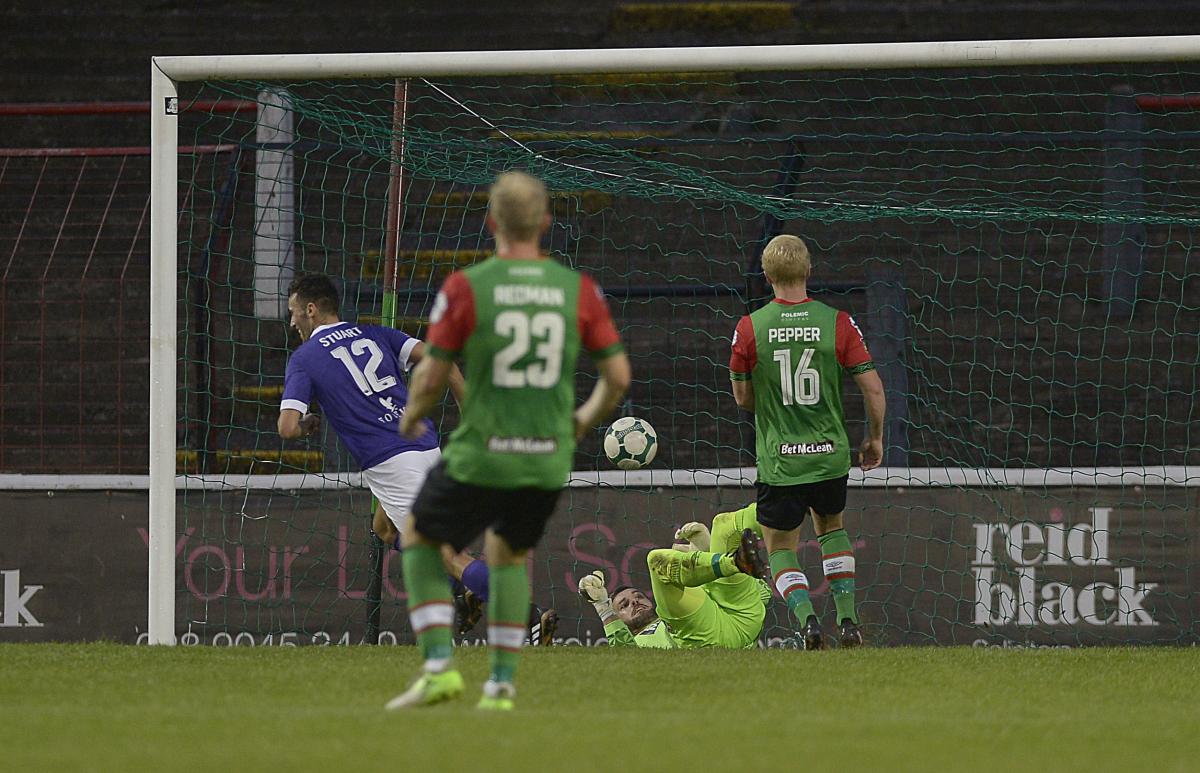 However, just as the Glens looked like they were in control, Larne fought back. Former Glentoran cup final hero David Scullion headed over when unmarked after 20 mins. Then, three minutes later Larne should have been level but a combination of Morris and Birney denied Scullion and Gilmour in a mass goalmouth scramble. Eventually the visitors’ breakthrough came, Scullion ran at the retreating Crowe and got the cross in, finding the unmarked Darren Stuart who had the simple task of volleying in from 5 yards out. 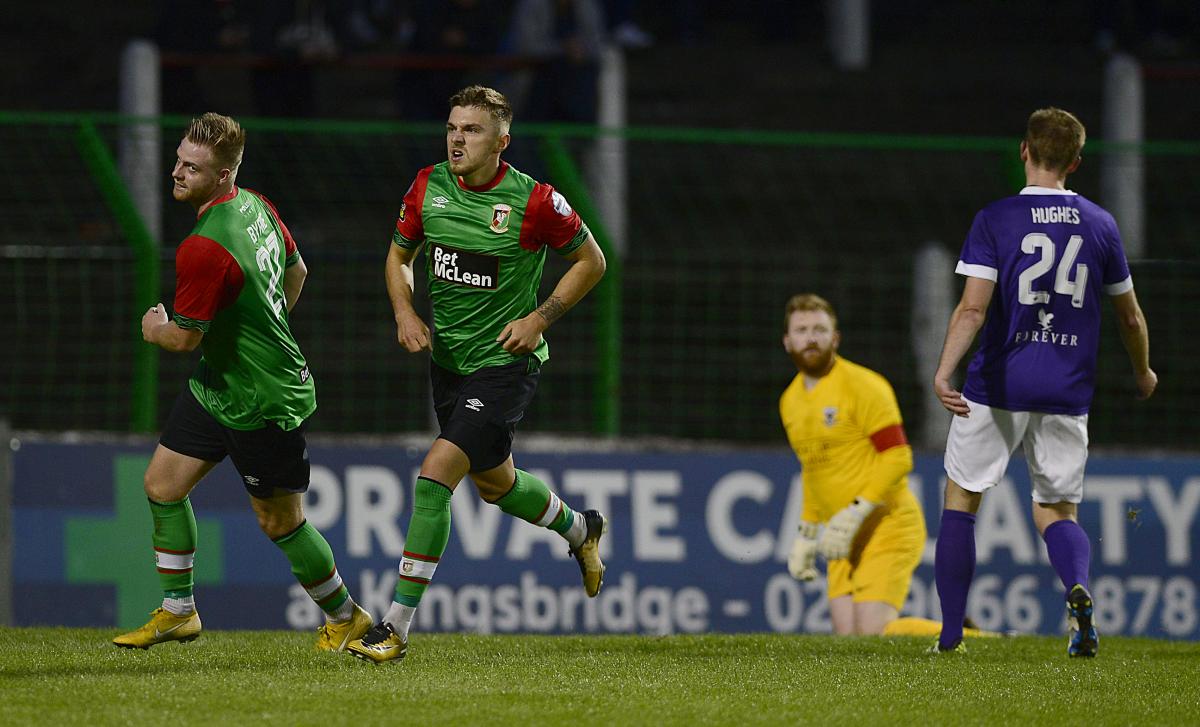 The remainder of the half looked to have petered out but Glentoran levelled right on half time. Connor Pepper created a goal without touching the ball, his pressure in combination with McGuigan forced an awful pass across the Larne backline, McDaid beat McEleney and McNally to the loose ball, controlled and planted a neat finish low into the corner. Half Time Glentoran 1-1 Larne. 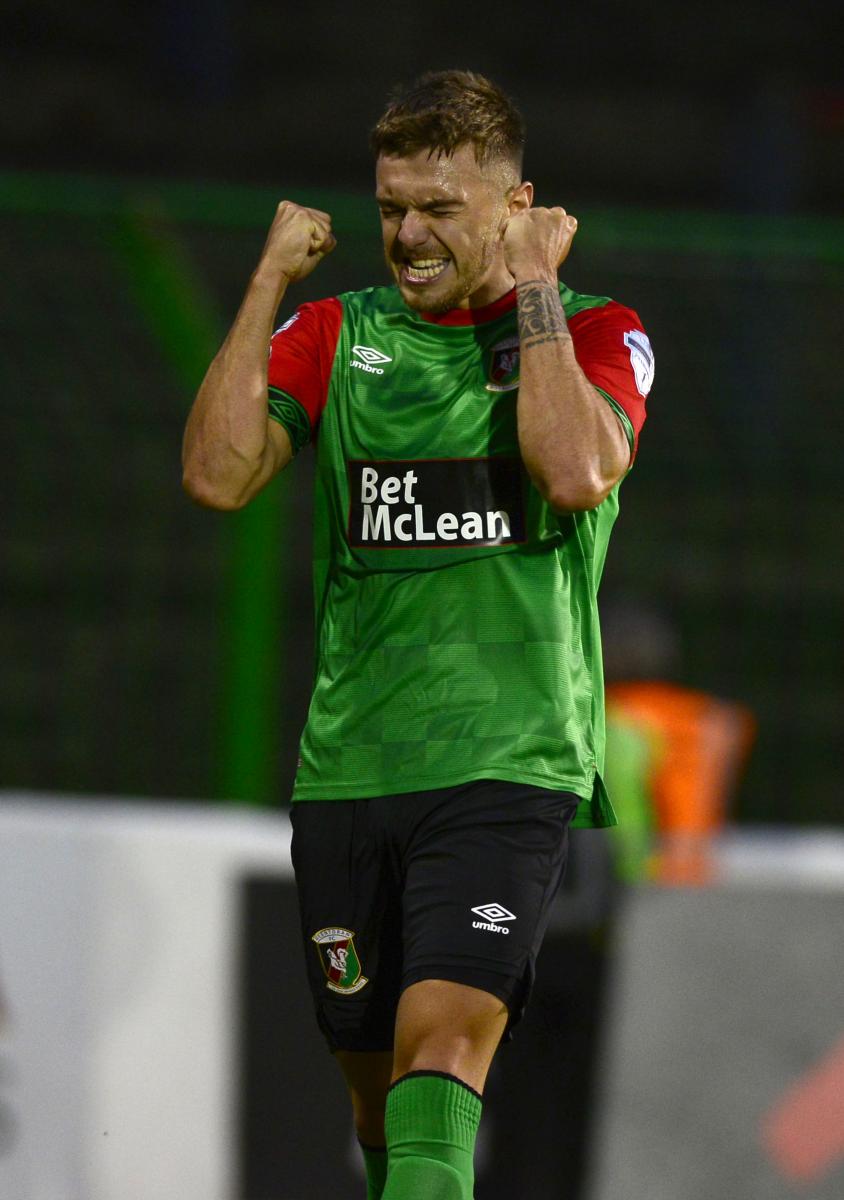 In contrast to the first half the second started in cagey fashion, the only opportunities of note in the first ten minutes of the second were both tame Glentoran free kicks. Then Marcus Kane went close, hooking a ball over from 20 yards after Conor Devlin failed to punch clear. Two minutes later the captain went one better, heading firmly past Devlin after Gordon’s flick on giving Glentoran the lead. Kane went close again a minute later this time glancing a Gordon cross just wide of the far post. 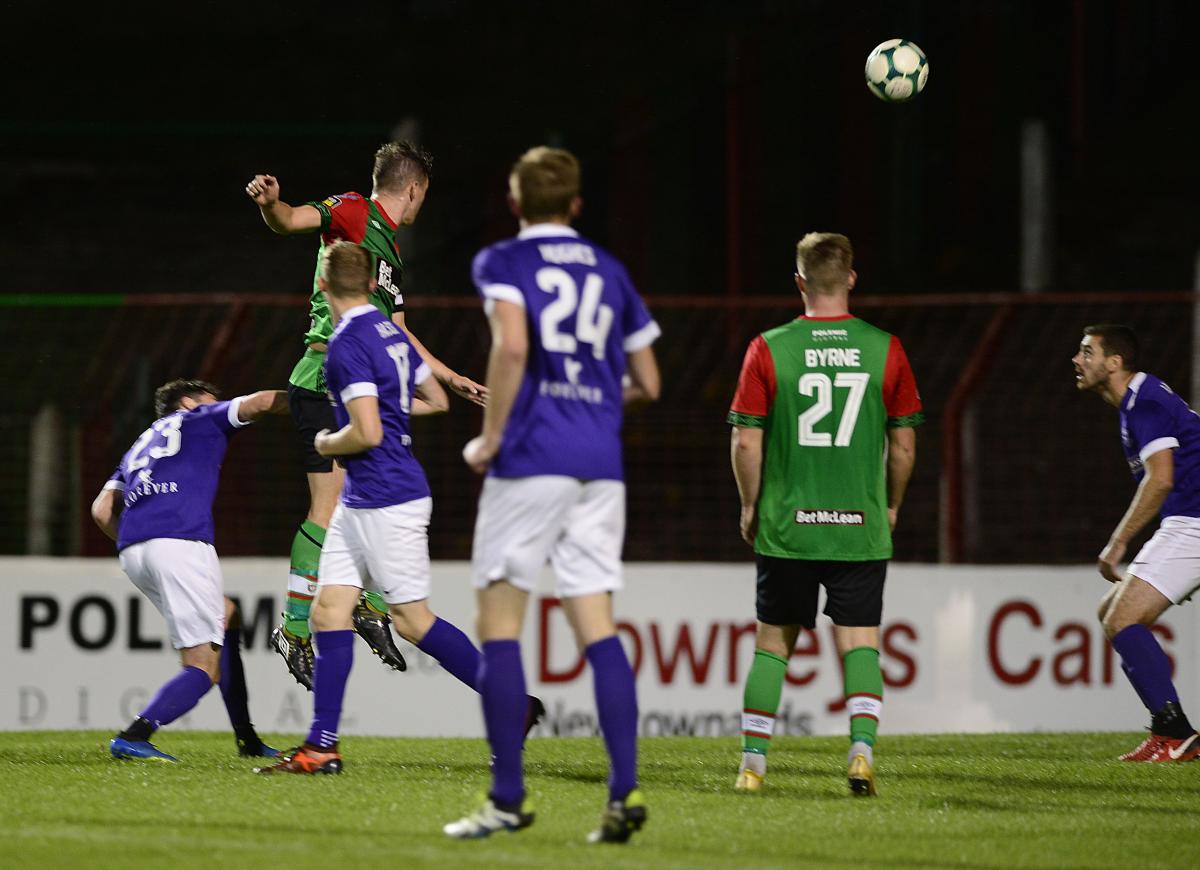 McDaid was next to threaten as Glentoran once more looked to have gained control, but like the first half the visitors regrouped and enjoyed a purple patch of their own. Former MK Dons full back Ben Tilney impressed throughout, on the hour mark he displayed neat footwork and skill to work another opening for Scullion but the veteran winger couldn’t find the finish. The Inver Park side then forced a couple of corners and from one of those they were level. Gilmour, Morris and Stevie Gordon all fought for the same ball and in the resulting scramble Chris Ramsey found the ball and gleefully tapped into the empty Glentoran net to level the tie at two. 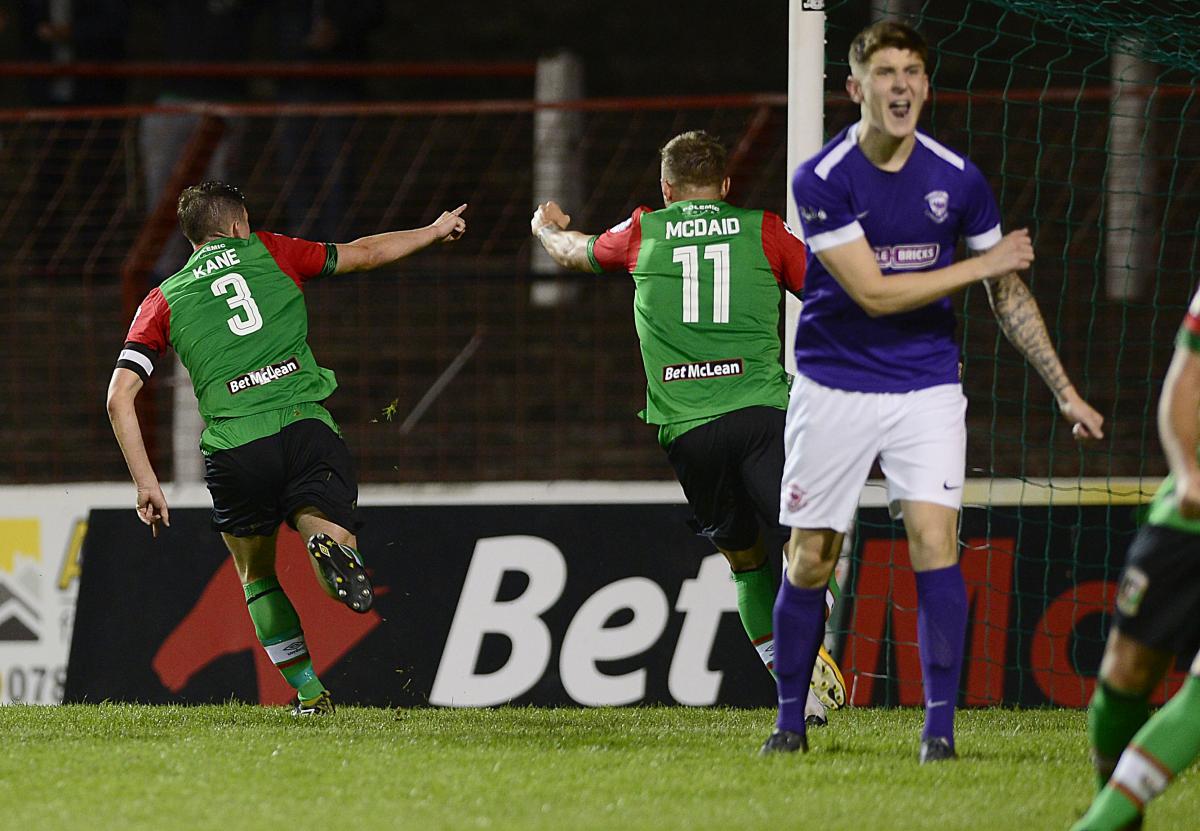 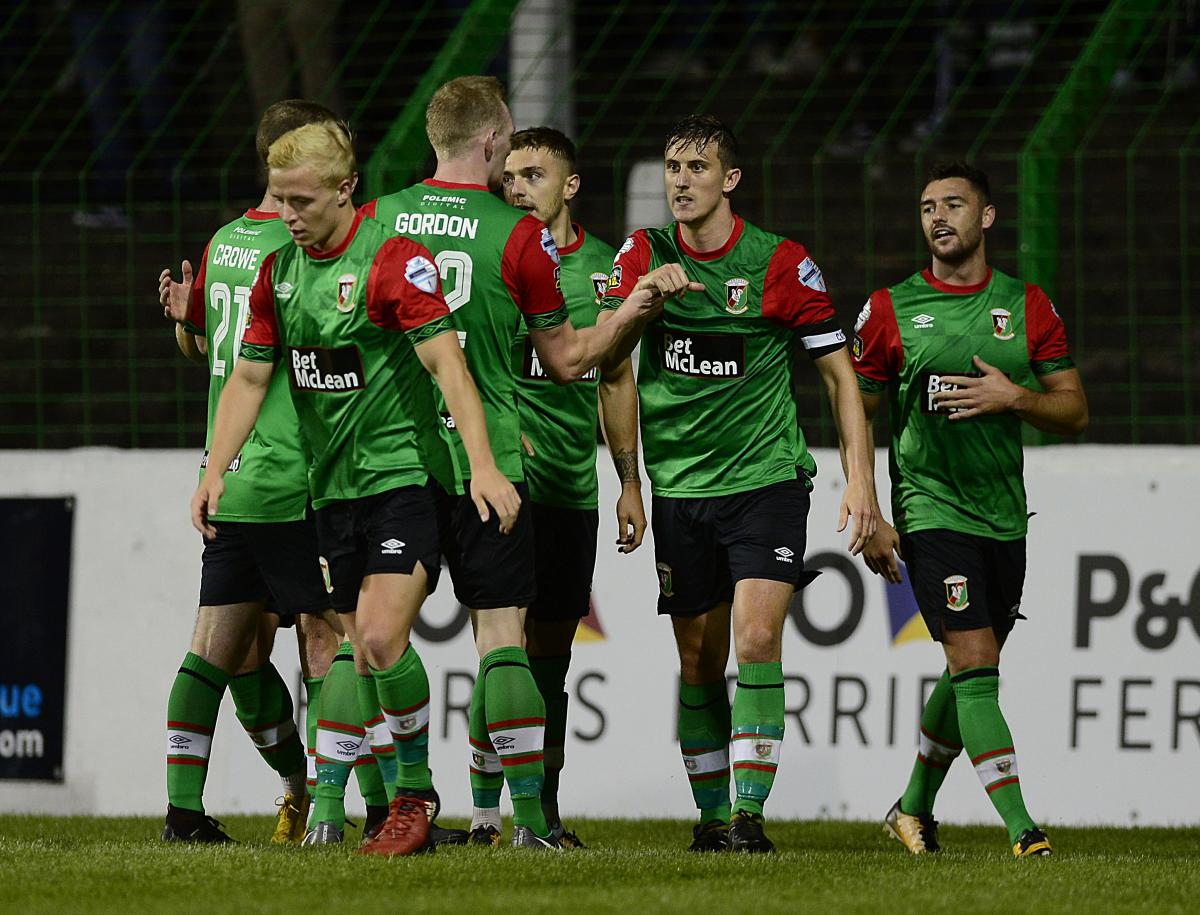 A minute later John McGuigan could have put the Glens in front as he raced in on goal but he was denied by Devlin. The game at this point became cagey and tentative as clearly neither side wanted to risk giving up the winner. Robbie McDaid though he had found it with 15 minutes remaining but his celebrations were cut short as the linesman adjudged he was in an offside position. Neither side could fine the crucial goal so 30 minutes extra time were required to find a winner. End of normal time Glentoran 2-2 Larne. 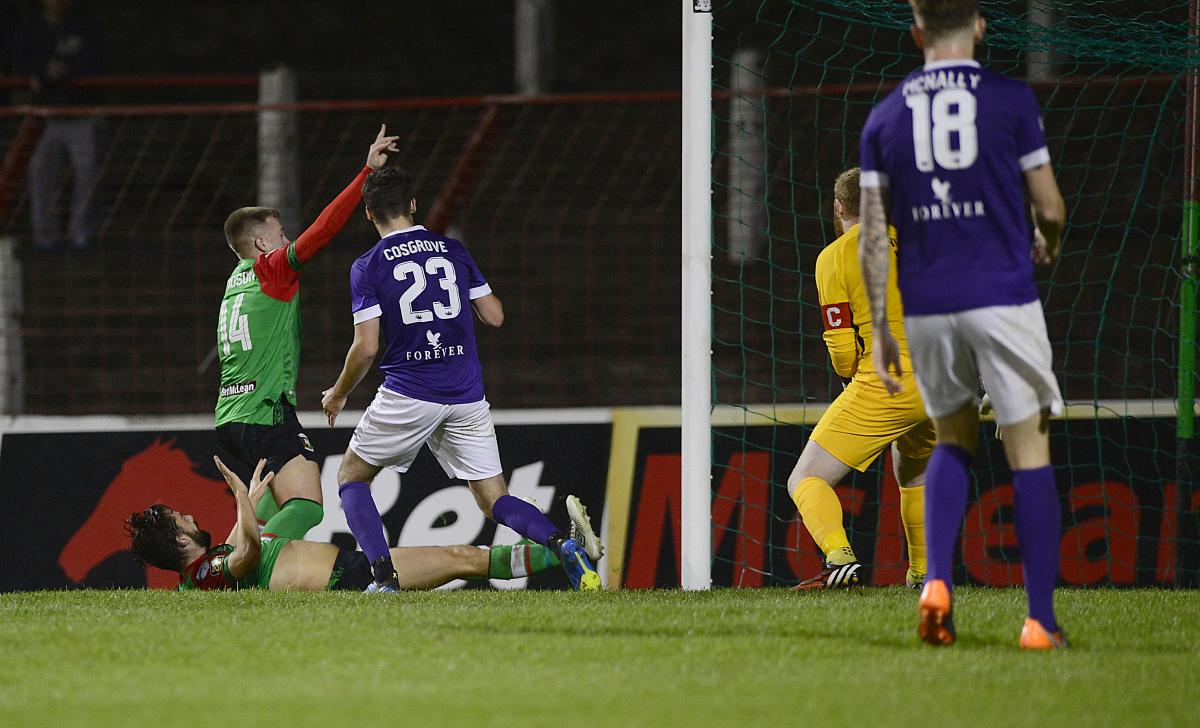 Extra time featured few clear cut chances, McGuigan missed the best chance of the first half, clipping the ball over a sliding Devlin but also wide of the post. Had John looked square Curtis Allen was calling for a cross but the chance slipped by. Veteran Jeff Hughes went close for Larne at the Sydenham End, he found himself unmarked at a corner and headed towards the corner of the goal but Elliot Morris denied him with an excellent save. The second extra period followed a similar cagey script but did provide one decisive moment. In a move started by the excellent Pepper, McGuigan held the ball up, returned it to Pepper who waited for the overlapping substitute Nathan Kerr. Nathan fired a bullet of cross along the ground and Dylan Davidson won the race, beating Curtis Allen to the cross to tap in at the back post and win the cup tie. 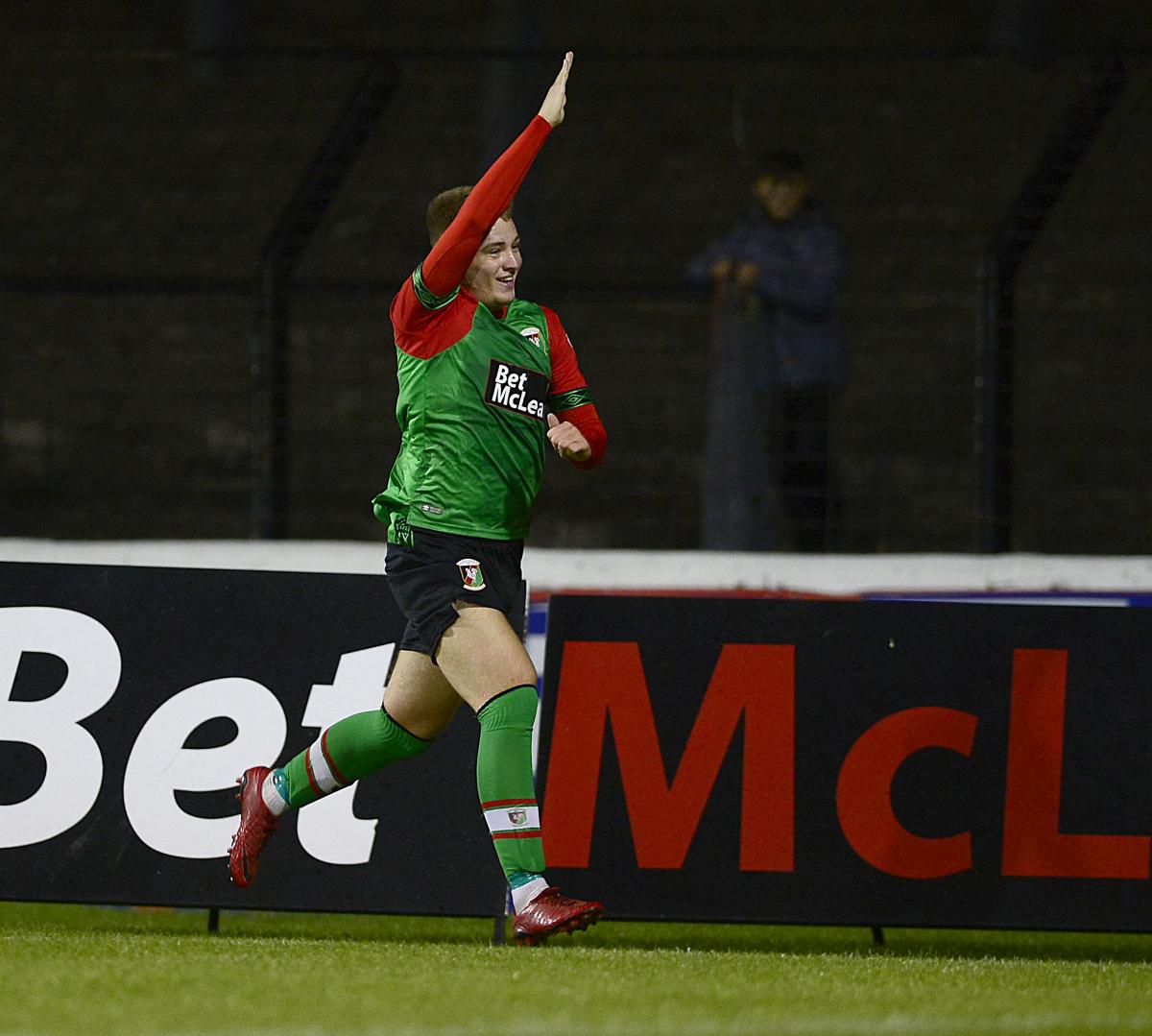 An excellent advert for the Northern Irish game and a keenly contested cup tie which Glentoran probably deserved to edge. Ronnie McFall will want to keep the momentum going when he takes his side to Mourneview Park on Saturday to take on Glenavon.