Glentoran made it 5 wins in a row in the Danske Bank Premiership with a well deserved 3-1 victory over Big-Two rivals Linfield. We remain in 6th place in the table but with games in hand over all the teams above us and if we can maintain our current form it could be an interesting run in to the end of the season.

As in last week's meeting at the National Stadium, the Blues started the brighter and created the first chance of the game on 6 minutes when Lavery got to the by-line on the right before driving a low cross across the 6-yard box. Fortunately there was nobody on hand to get a touch on it. Within a minute there was another attack down our left side. This time it Was Fallon who crossed into the area. The ball was cleared back to him and his second cross was turned over his own crossbar by Luke McCullough for a corner. 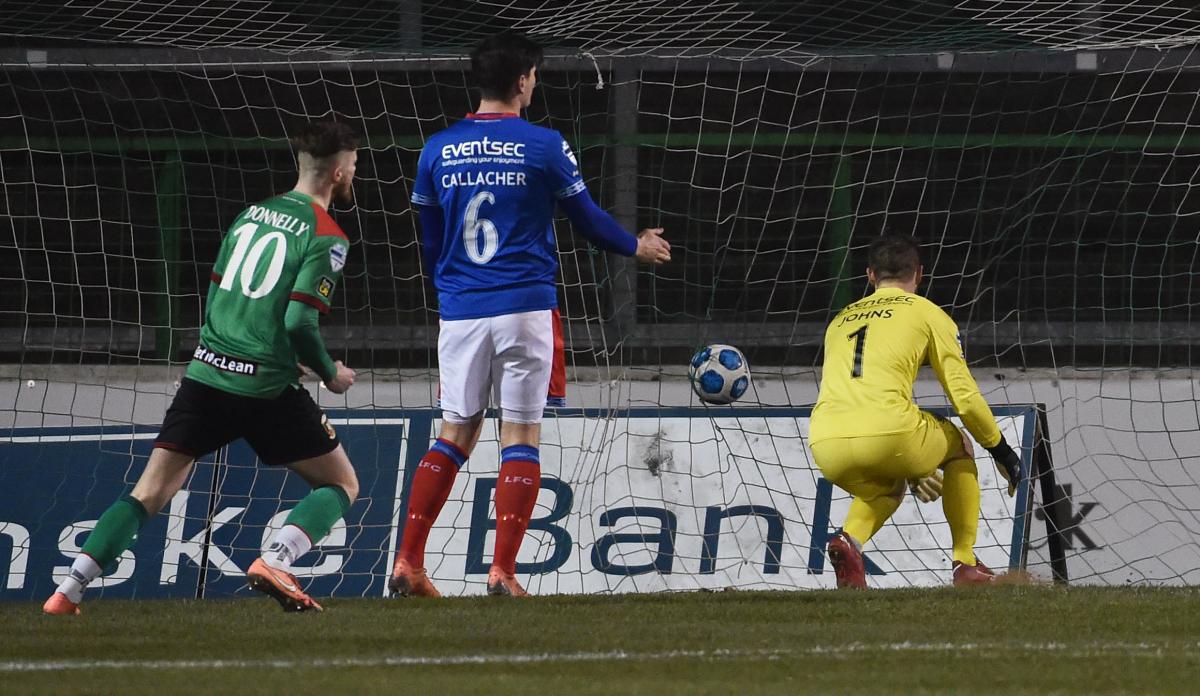 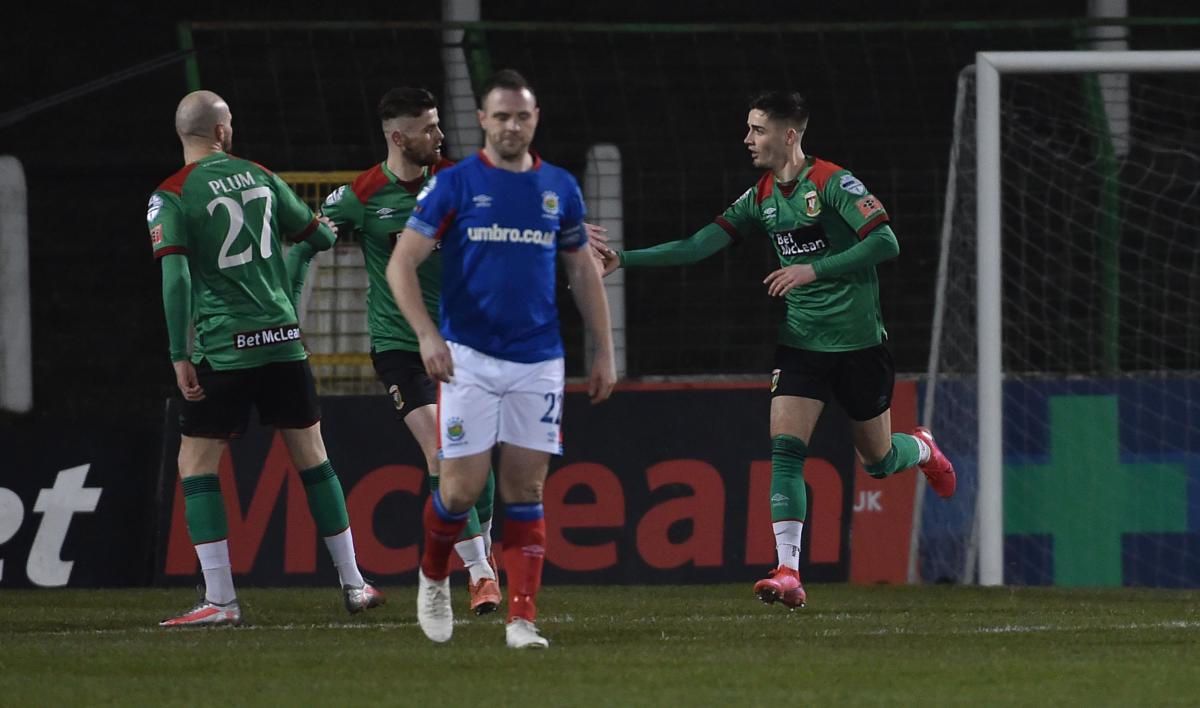 Glentoran went in fron in the 9th minute. A superb long pass from Paddy McClean sent Conor McMenamin clear on the left. He got the better of Pepper and fired across goal where an unmarked Jay Donnelly was on hand to thump it home from 6 yards out. It might have got even better for the Glens just 2 minutes later when Hrvoje Plum broke clear. He held off a challenge but his shot was well saved by Chris Johns. Perhaps Plum might have been better going down under the challenge but ultimately didn't affect the outcome of the game. 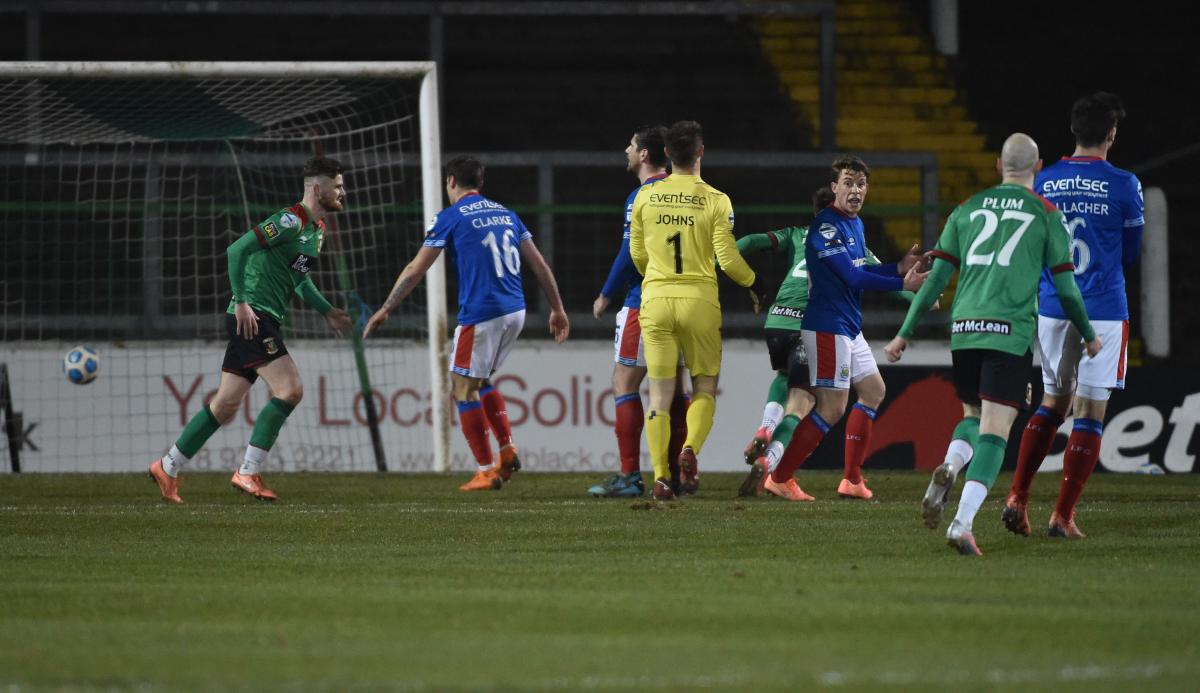 Midway through the first half skipper, Marcus Kane got on the end of another long ball forward. As he hooked the ball towards goal he seemed to be felled by Chris Johns but referee Keith Kennedy saw nothing wrong. On 33 miutes Glentoran doubled their lead. Paddy McClean played a free kick forward and Jay Donnelly flicked it on for his brother Ruaidhri. Chris Johns raced from his goal and he and Ruaidhri Donnelly met just inside the area. Johns seemed to get there first but spilled the ball right at the feet of Conor McMenamin. McMenamin's initial effort hit Johns but fortunately for the Glentoran striker, the ball landed back at his feet and he knocked it past the keeper and into the City End goal to make it 2-nil. 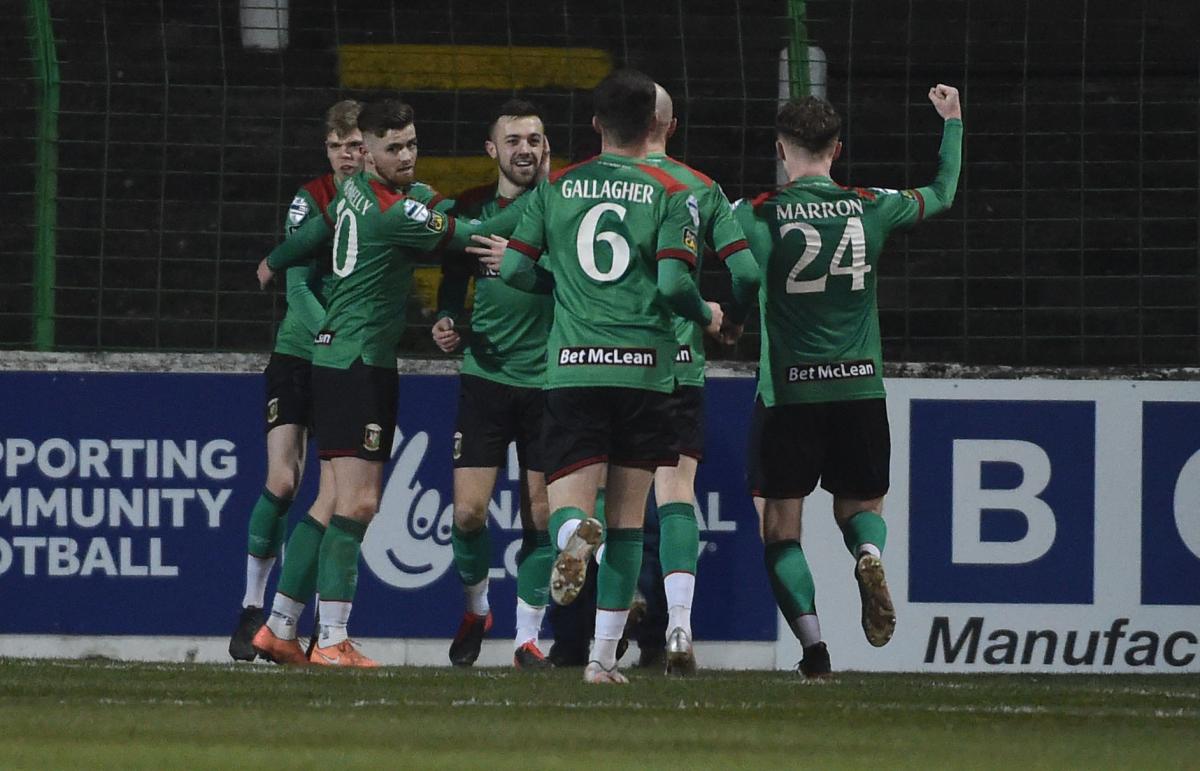 As the first half drew to a close and it looked like the Glens would take a 2 goal advantage into halftime we had a moment of controversy. As Pepper tried to get onto the end of a hopeful ball forward Paddy McClean intercepted the ball with a superb tackle. Referee Kennedy deemed it a foul though and awarded Linfield a free kick around 20 yards from goal and to make things worse, produced a yellow card for the astonished McClean! You have to wonder what Peter Rafferty or Rab McCreery would have made of it all. The free kick was driven low, under the jumping Glentoran wall and although Dayle Coleing made an excellent save the ball broke to Fallon who netted from close range. 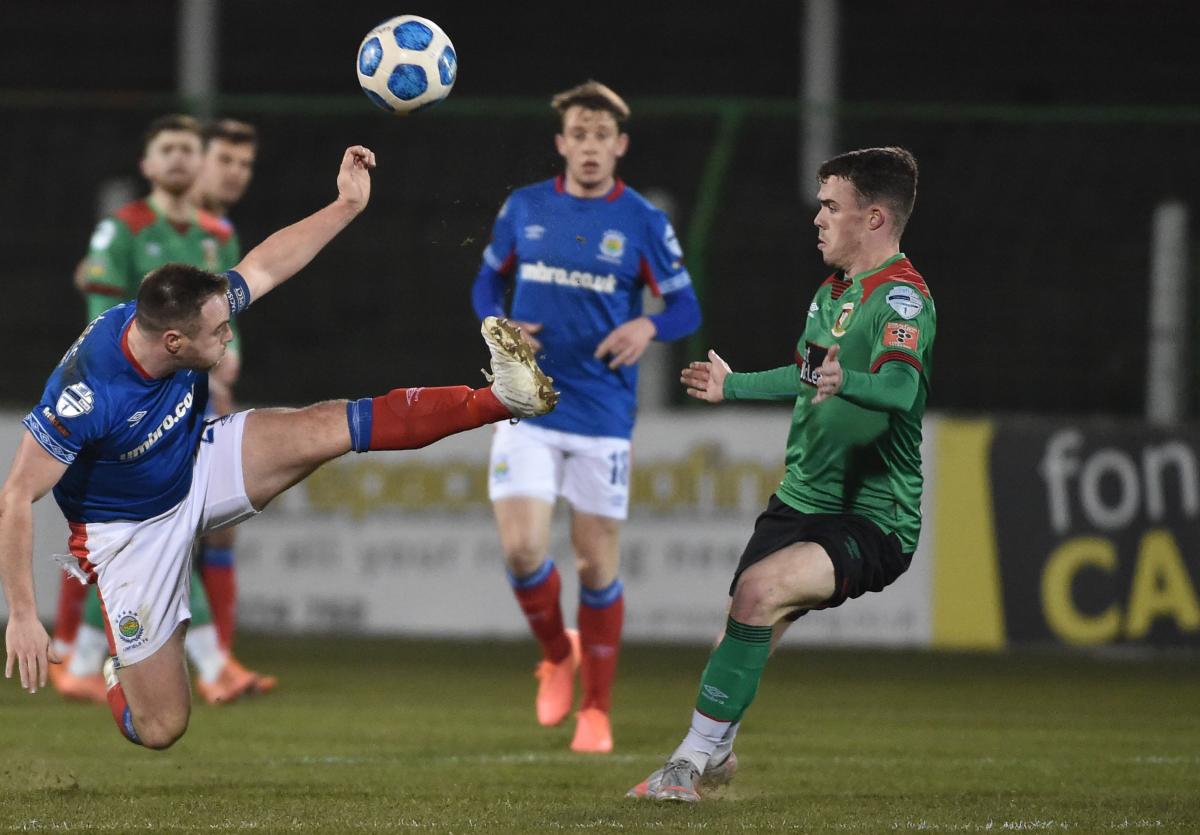 Both sides had half chances in the early stages of the second half. Cooper's shot from a very tight angle was well kept out by Dayle Coleing whilst at the other end, following a neat passage of play involving the tireless Cricky Gallagher and Hrvoje Plum, Conor McMenamin's cross-shot was well gathered by Johns in the visitors' goal. You always felt that the next goal in the game would be crucial and it duly arrived just after the hour mark. Conor McMenamin went past Pepper once again and won a corner. Hrvoje Plum swung it into the area but Johns' punch out was unconvincing and the Glens returned it into the area and won another corner. 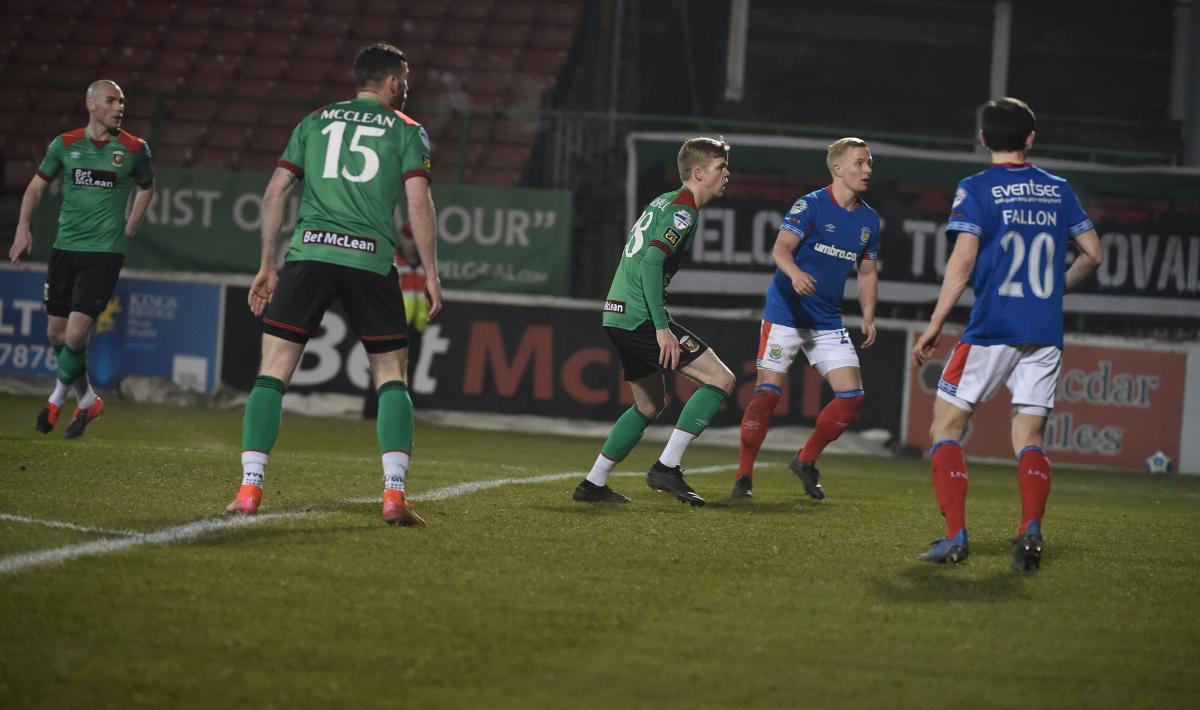 The ball was cleared to Rhys Marshall who struck it from the middle of the 'D'. Johns did well to keep it out but could only push it back in the direction of Marshall who made no mistake from 15 yards, drilling the ball into the bottom corner of the Sydenham End goal. Within 5 minutes the Glens alomst grabbed a fourth. A great run and cross from the left by Marcus Kane looked to be right on the head of Jay Donnelly but Callagher got there just a split second before him to put the ball behind for yet another corner. The Blues made a couple of changes to try and get back into the contest but the Glentoran defence of Marron, McCullough, McClean and Kane were superb and backed up by a hard working midfield, kept chances to a minimum. Lavery did get a rare opportunity late on but dragged his shot well wide of the target. 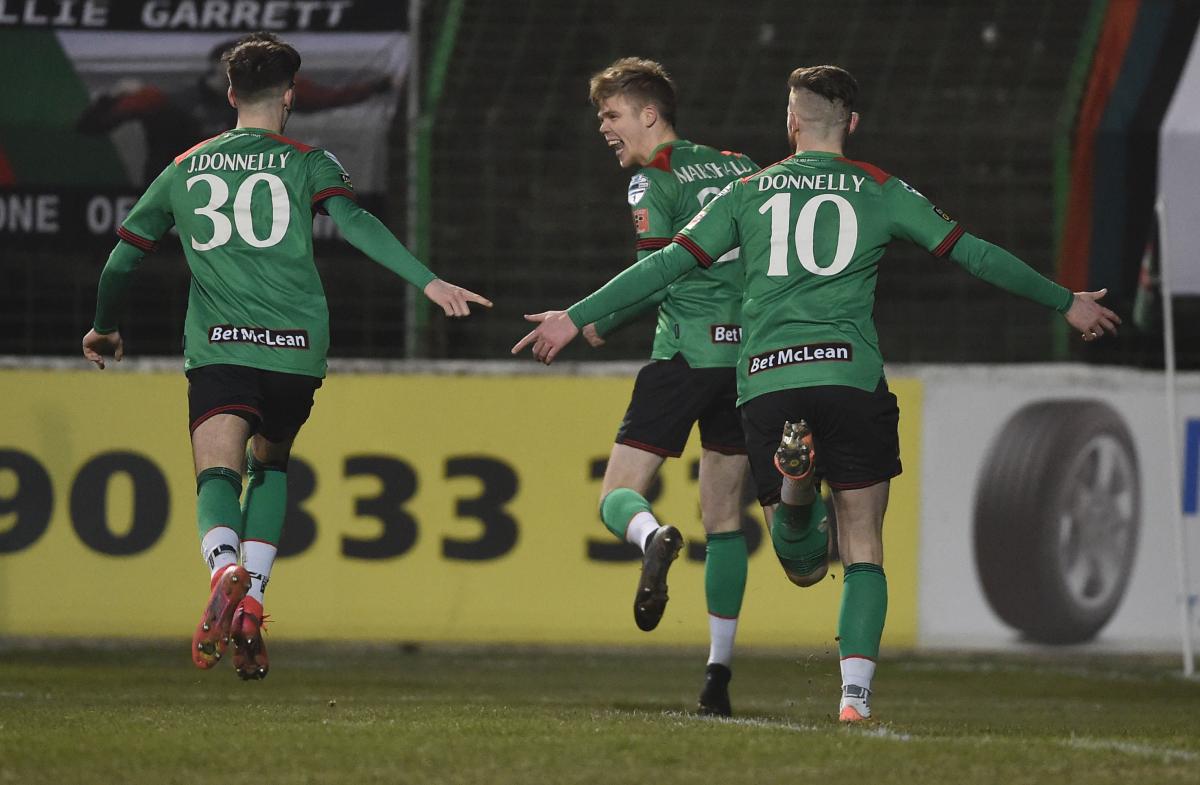 In stoppage time Conor McMenamin had a great opportunity to score a 4th for Glentoran, outpacing Pepper and Mulgrew to set up a 1 v 1 chance with the keeper. Unfortunately for McMenamin, the keeper was able to block his effort but moments later the final whistle was greeted by celebrations by players, management and club officials. 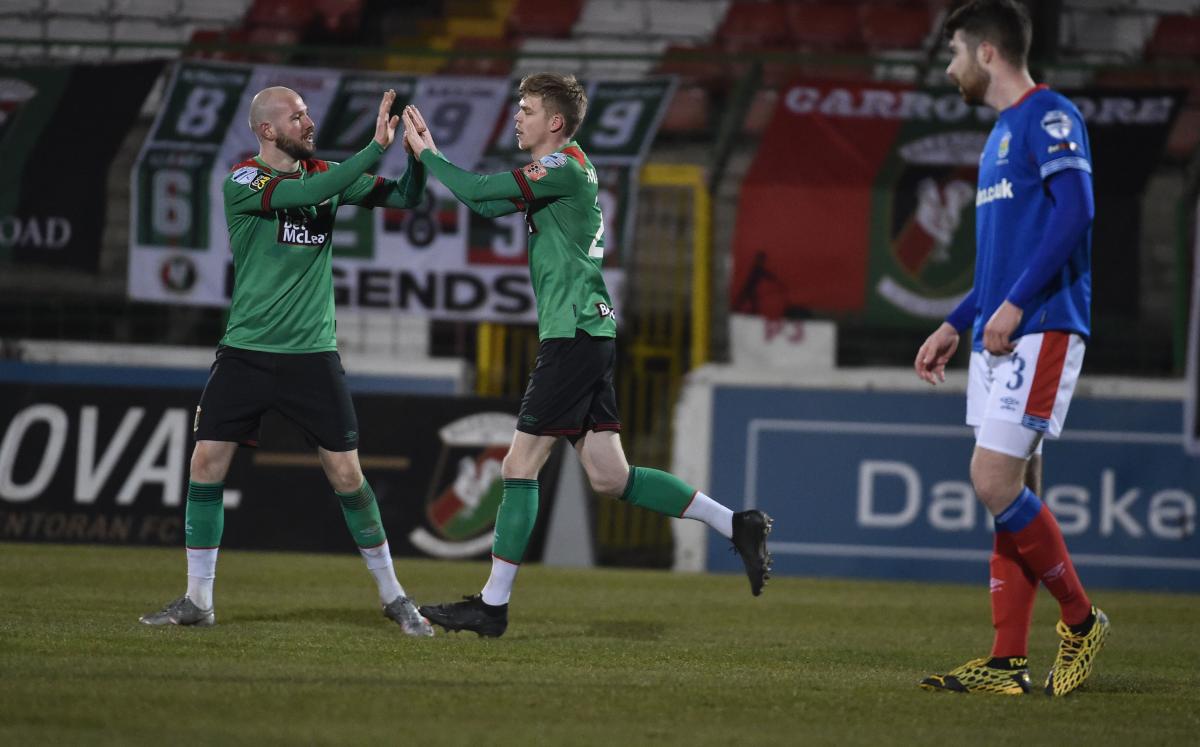 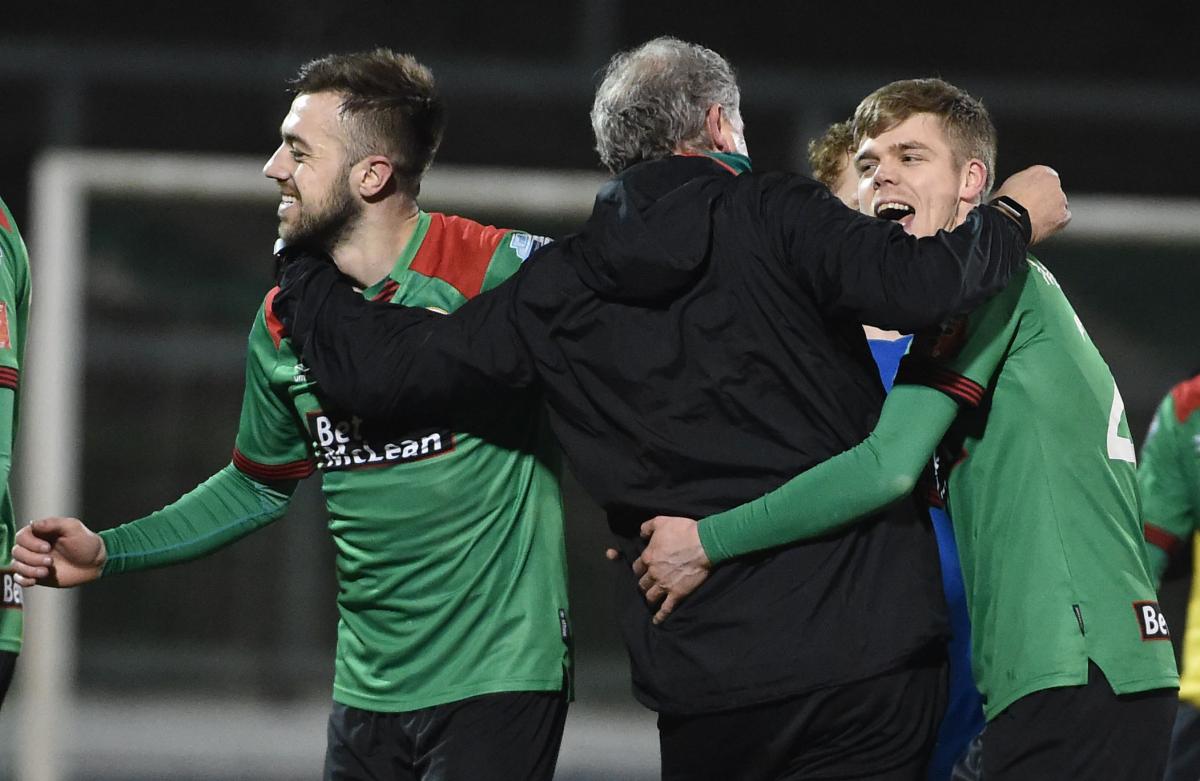 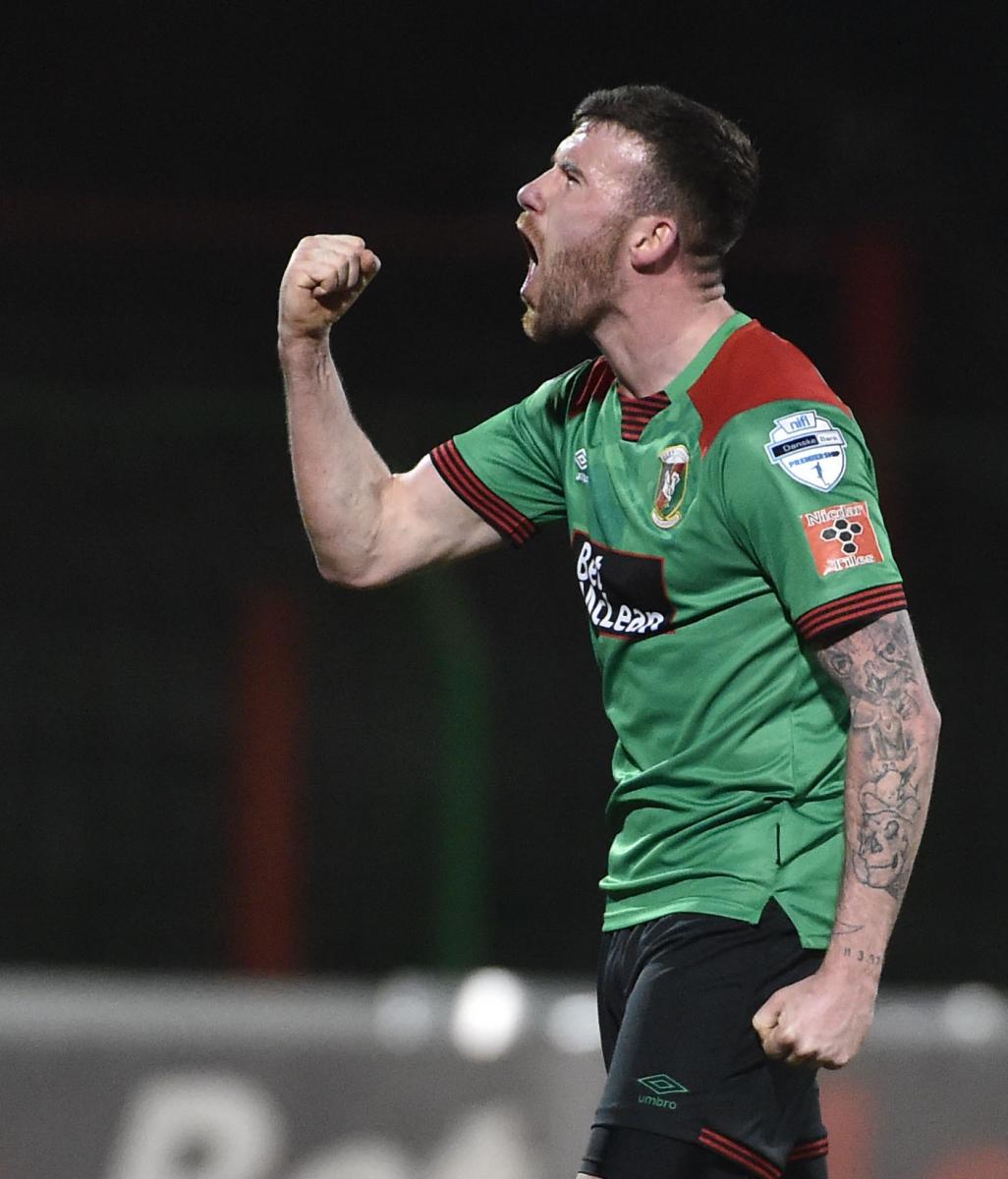