This is the second of a four part review of 2020 as it impacted Glentoran on and off the pitch.  It has been written for www.glentoran.com by Andrew Morrison, a final year student in Sports Journalism at Liverpool John Moores University.

Part 3 July - September (Up for the Cup)

July saw a relaxation on the restrictions regarding Covid-19 meaning a limited return to normal life. This in turn meant that Glentoran were able to return to action.

The club was back training, this was no different across the age groups with the U12’s joining Stephen Lowry at the Hanwood Centre, boosted by the presence and support of three first team players - Paul O’Neill and Mal Smith who both came through the Glentoran academy were accompanied by Northern Ireland U21 international Joe Crowe 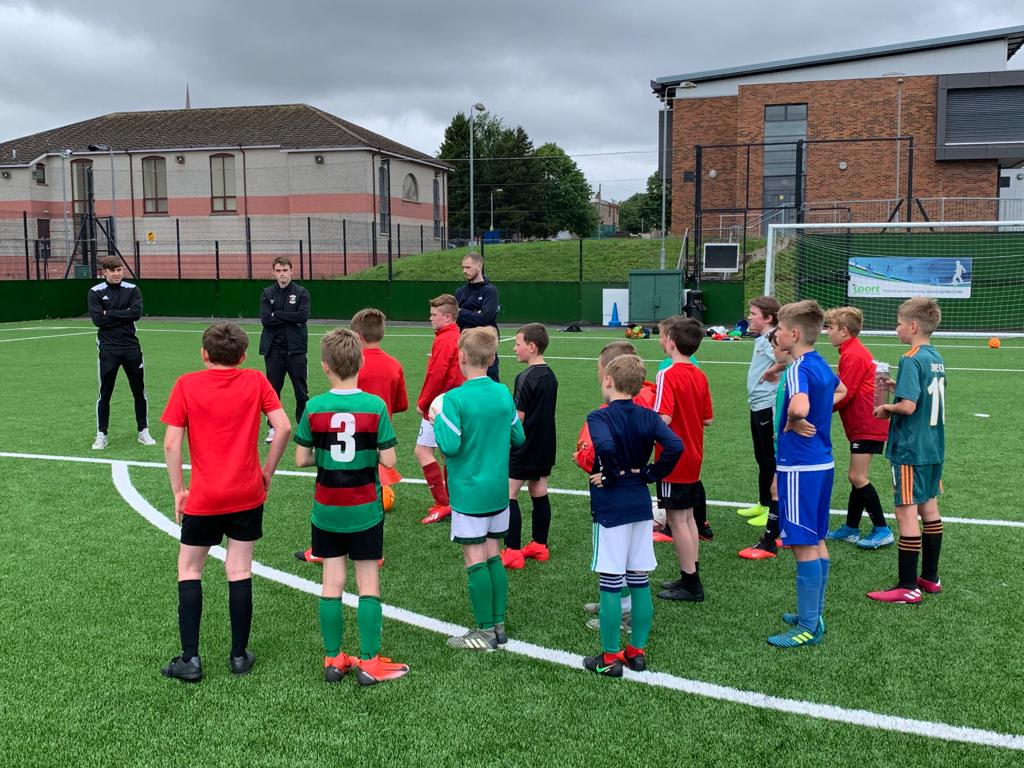 As the Glens got back into the swing of things all focus was on the Sadler’s Peaky Blinder Irish Cup.

Speaking ahead of the club’s semi-final against Cliftonville, Manager Mick McDermott expressed how good it was to be back to training:

“The people around here like the volunteers, the board, the staff have been excellent, and the players have been superb.

It’s a strange environment but people adapt, and we are doing that, to be honest it’s an exciting time having everyone back on the pitch, everyone’s together, everyone’s healthy and hopefully we can maintain that.”

“It will be strange for a moment. I have played in closed door environment’s before and yes, it is strange, but players still have to perform their role.

The way they have to look at it is I still have the same role to do in the same moments of the game, so nothing changes for them, but of course the energy from the fans gives you a lift. You feel that passion and energy and it gives you a lift.

The people at home most likely won’t notice much but they will have the chance to watch an Irish cup semi-final and final live on tv which is brilliant for them.”

Then came that first game back. Sunday July 26th marked the return to action for Glentoran in what was a tense game for all involved.

An early Paddy McClean own goal gave Cliftonville the lead, however, Robbie McDaid later levelled the scores with his 20th goal of the season.

With the sides inseparable the game was forced to go to extra time. After the additional thirty minutes of action the sides where still at a stalemate and forcing the game to penalties.

McDaid, Rory Donnelly, Crowe, Nasseri, O'Connor, Jonny Frazer and Kane were all successful from the spot. However, the hero on the night was long term club legend Elliott Morris.

The 39-year-old saved spot kicks from McMenamin and McDermott after Ryan Curran sent his penalty over the bar.

Ultimately, the Glens won the shoot-out 7-6 and sealed their spot in the final against Ballymena United. 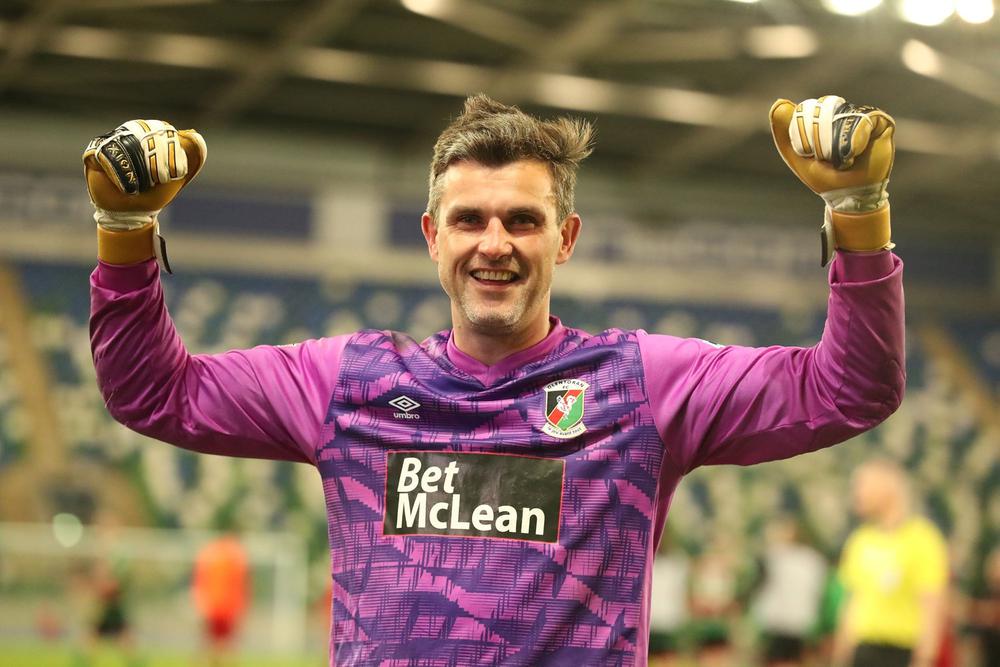 Just five days later that cup final was played at Windsor Park with Mick fielding an unchanged starting eleven from the semi-final.

Meanwhile the Ballymena United side contained two former Glentoran players in Jonny Addis and Steven McCullough with James Knowles on the bench.

The Braid men started the better of the sides, however notable defensive contributions from Elvio Van Overbeek and Keith Cowan kept the scores level.

The Glens took the lead with a brilliant 22-yard-effort from Paul O’Neill curling beyond Glendinning in the Ballymena goal.

The goal didn’t dampen the spirits of United who quickly had attacks of their own. but Elliott managed to successfully deny them.

The Glentoran defence couldn’t hold onto their lead after a period of pressure. Three minutes into the second half a corner from Steven McCullough was met by Friel. Although Elliot felt he was pushed referee Tim Marshall let the goal stand.

A tense second half saw few chances with the game staying 1-1 and once again the Glens went to extra time.

After chances for both sides in the first half of extra time, the score remained 1-1, with only six minutes left Robbie McDaid scored his 21st goal of the season making it 2-1 to the Glens.

The goal came following an unstoppable run from Ciaran O’Connor before firing the ball into the box. It was then met by McDaid who fired a low effort past the goalkeeper.

Ballymena were unable to respond to the goal with the game going on to finish 2-1 making Glentoran Irish Cup champions for a 23rd time. 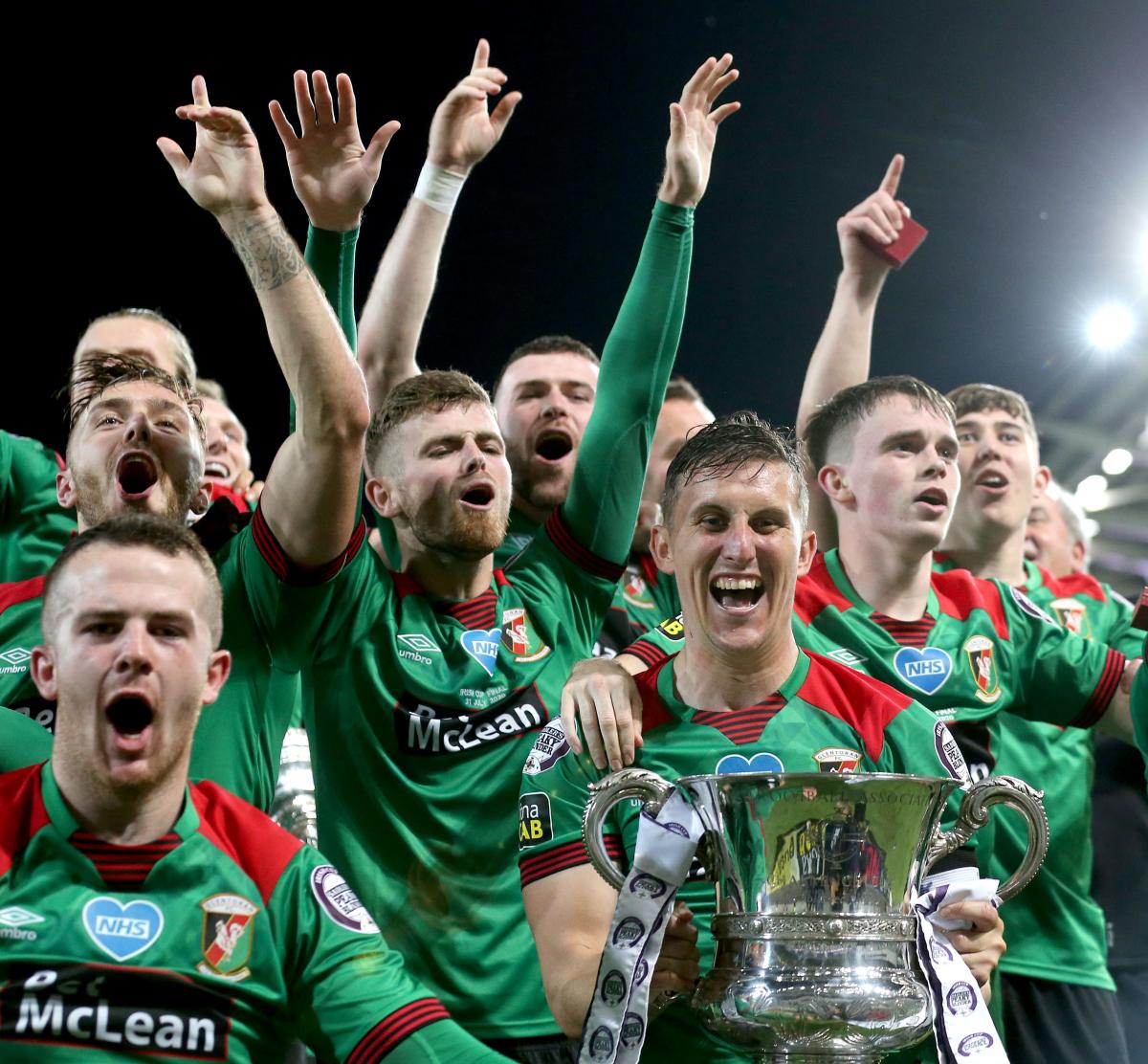 As August began the good news kept on coming. The day after the cup final win the club were delighted to announce three new signings.

Rory Brown, Luke McCullough and Jamie McDonagh all signed for the Glens in what would turn out to be a very busy summer in the transfer window.

Mick McDermott spoke of the need to add to the squad:

"It's important to strengthen when you're already improving, and these three lads will make a major contribution to Glentoran next season and well beyond.”

McDermott got his wish. Later in the month the Glens also announced that Gael Bigirimana and Gibraltar international Dayle Coleing had signed.

There were also exits. Marijan Antolovic left to return to his native Croatia whilst Gavin Peers departed to continue his career with Warrenpoint Town. There were also two departures across the city to Linfield.

“Elvio has decided to return to Holland. Throughout his time at the Oval he has been a top professional and a special person who we will all miss at Glentoran. He contributed to our success this year in a big way.”

The club also announced the re-established partnership with Ashfield Boys’ High School. The association with the club dates right back to the 1960s / 70s when past Ashfield pupils such as Ron McCreery, Barney Bowers, Alan Paterson and Alan Harrison all played for the club.

Both club and school are developing a full-time football academy for players between the ages of 16-18. These young players will have the opportunity to not just study for Level 3 BTEC Extended Diploma in Sport (equivalent of 3 ‘A’ Levels) but will also have a schedule for full time training, coaching, strength and conditioning. Furthermore, two IFA Education Development Officers, will deliver a full enrichment programme.

The side were then back in action and back in European competition. For the first time in five years Glentoran played in Europe, this time it was against HB Torshavn from the Faroe Islands.

A 1-0 win courtesy of Robbie McDaid sent the Glens through to the next round with Covid-19 unfortunately leading to the scrapping of two leg qualifiers. 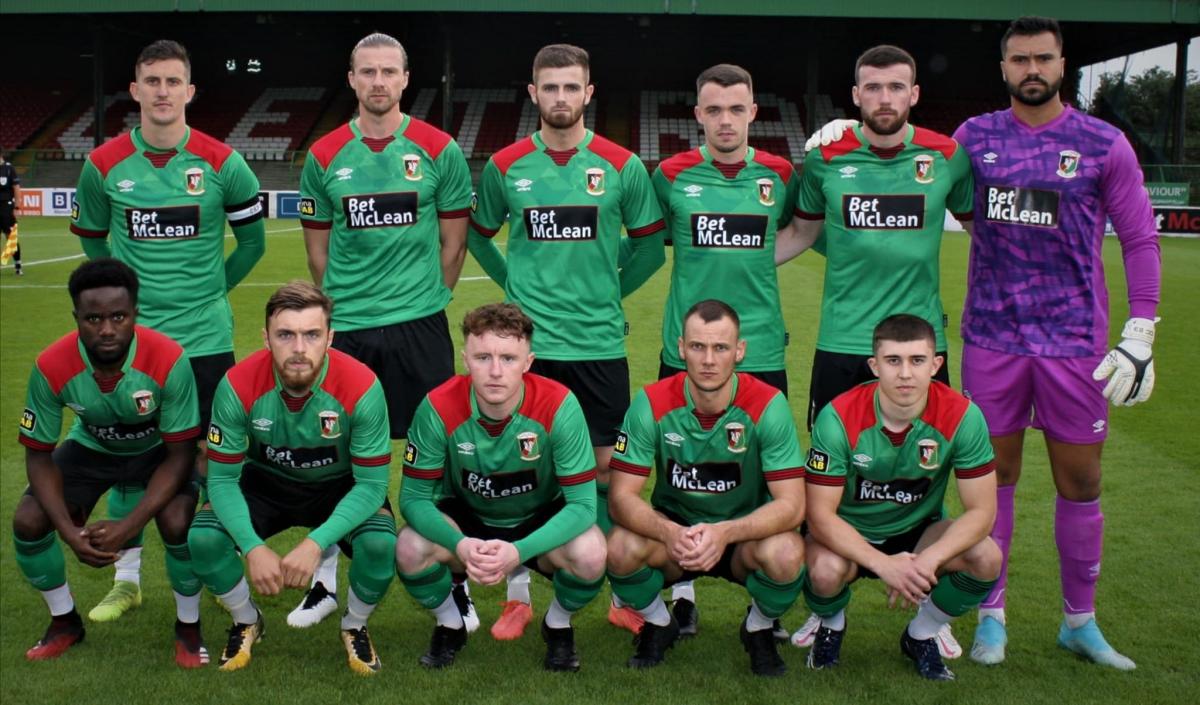 As a result, we were drawn away to Scottish Premiership side Motherwell.

A 5-1 loss at Fir Park didn’t tell the full story. The Glens put up a valiant effort against a strong side and got through to half-time 0-0 having had chances to take the lead.

In the second half the quality of the opposition shone through. Having gone 5-0 down Glentoran won a late penalty which was converted by Robbie McDaid for his 50th goal for the club.

Elsewhere the Glentoran Women took on Cliftonville Women. A strong performance saw the Glens come out victorious with a 3-0 win.

Goals from Joely Andrews, Kerry Beattie and Jess Foy helped the home side to a comfortable result with new signings Jacqueline Burns and Hannah Doherty in the starting line-up. Meanwhile another new signing Shona Davis joined on the bench by returnees Sarah Connolly and Caragh Hamilton. 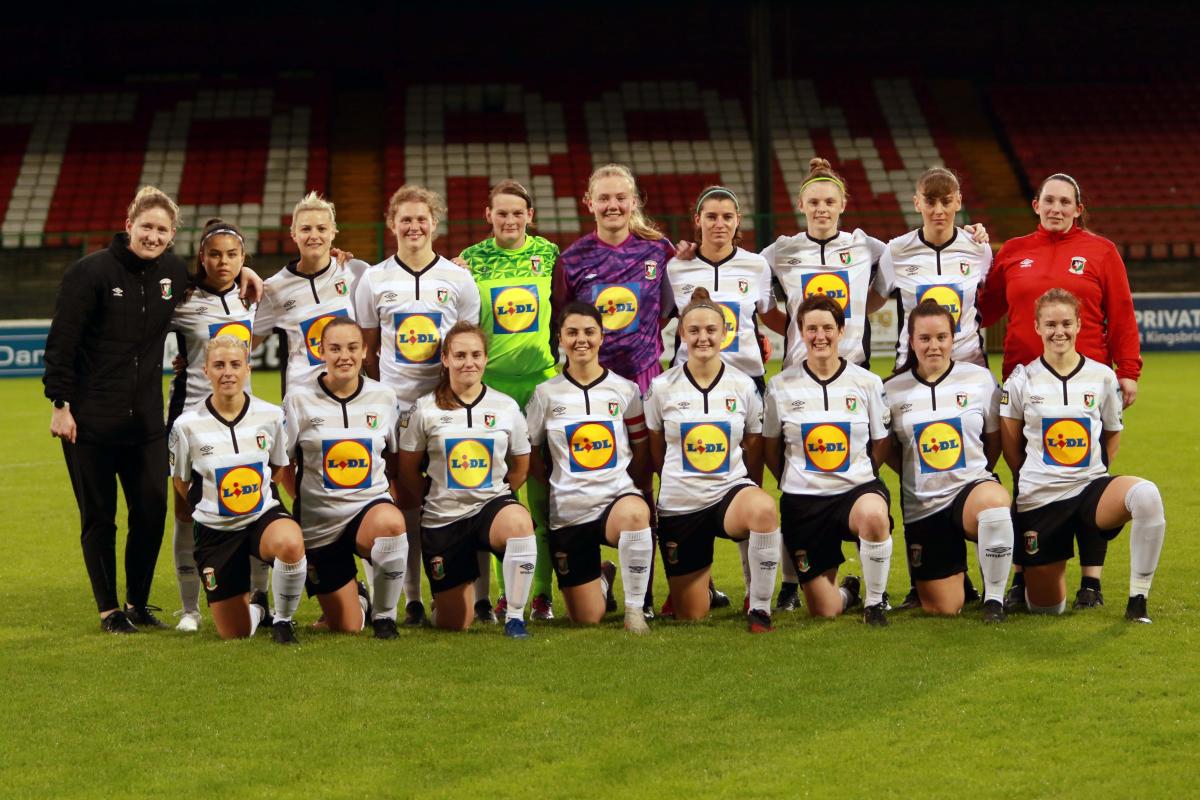 Glentoran Women start their season at the Oval

Like August, September was boosted by new signings and contract extensions as the transfer window was in full flow.

The month began with the club announcing the signing of Dale Gorman who joined after having his contract at Leyton Orient expire. Mick McDermott was quick to praise the player upon his arrival:

“He is full-time, fit, young and possesses great football ability.”

Jay Donnelly was also added to the squad and there were new contracts for Robbie McDaid, Paul O’Neill, Hrvoje Plum and Paddy McClean who extended his deal by three years.

Meanwhile there were also coaching additions. Former long serving player Andy Mathieson joined the club for his fourth spell in the form of Player Development Coordinator making him responsible for players progressing through the academy.

Norman Kelly took charge of the Glentoran Seconds having previously played for the Glens as a teenager then later on loan from Raith Rovers in 1994.

Iain Dickson took full responsibility as Manager of the Colts after several years working on the U20s coaching staff. Iain was part of the management team that successfully prepared young players such as Paul O’Neill, James McCarthy and Mal Smith.

Due to the rescheduling of the league, September also saw pre-season much later than any other year. The club played fixtures against Bangor, Portadown, H&W Welders, East Belfast and Warrenpoint Town with a range of great results.

This string of games started with a 6-2 win over Bangor and was promptly followed by a 3-1 victory over Portadown.

A 7-0 win over H&W Welders saw braces from Andrew Mitchell and Cameron Stewart plus goals from Rory Donnelly, Jamie McDonagh and Stevie Gordon gave the Glens a comfortable 7-0 win over our close neighbours.

The game also saw the team play in our new red away kit for the first time. The new strip is the first time the Glens have been in red for a decade. 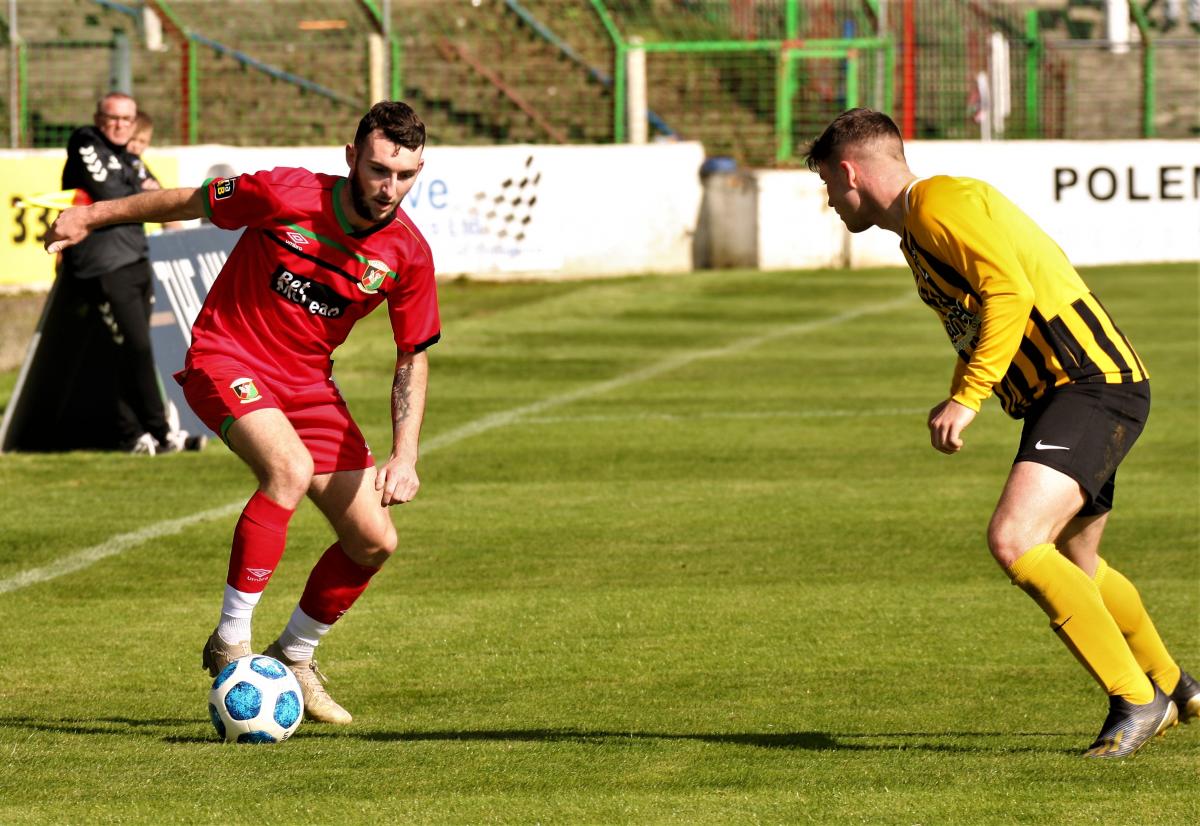 As pre-season continued the results remained positive for the side. Wins over East Belfast and Warrenpoint saw the Glens score a further nine goals in what was a prolific period of warm up games.

Elsewhere goals from Caragh Hamilton and Kerry Beattie sealed a 2-0 win for the women’s side over Linfield as they continued their positive start to the season.

The result also meant that they were top of the league and the only team with a 100% record after the opening couple round of fixtures.

They followed their result against the Blues with a 4-3 defeat to Sion Swifts as they dropped their first points of the season.

Having been level at half time the Glens came unstuck and conceded three second half goals. Despite goals from Aimee-Lee Peachey and Caragh Hamilton they unfortunately fell to their first defeat of the season.

However, they did get their season back on track in their next game with a 1-0 victory over Crusaders courtesy of a goal from Kerry Beattie.

The highlight of the month for the side was perhaps the international fixtures. Glentoran had six of their players represent Northern Ireland in their 6-0 win over the Faroe Islands in Torshavn.

Nadene Caldwell and Jackie Burns were in the starting line up while Sam Kelly, Caragh Hamilton and Joely Andrews were second half substitutes during the win. Kerry Beattie was an unused sub. Our former star players Demi Vance (Rangers) and Lauren Wade also played a big part in the win. 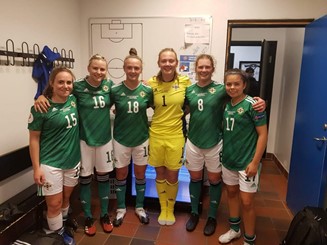