This is the second of a four part review of 2020 as it impacted Glentoran on and off the pitch.  It has been written for www.glentoran.com by Andrew Morrison, a final year student in Sports Journalism at Liverpool John Moores University.

Before the first of these matches there was of course the closure of the transfer window which saw manager, Mick McDermott bring in Bobby Burns on loan from Barrow FC having previously played for both Glenavon and Hearts. McDermott spoke highly of the 21-year-olds mentality:

“Bobby fits the profile of what we are looking for at Glentoran: quality, honesty, pace, enthusiasm and a strong desire to compete. He is another strong addition as we move forward with this project.”

There were also late exits. Jonny Frazer and Stevie Gordon both left on loan to Carrick Rangers and Paul McLaughlin headed to Bangor for the campaign. Meanwhile young defender James McCarthy signed a new contract before going on loan to H&W Welders for the season.

The first game back saw the Glens take on Bangor at the Oval. A corner from Jamie McDonagh was met by Seanan Clucas to take the lead before an excellent Ciaran O’Connor strike made it 2-0.

The result sealed Glentoran a place in the next round of the County Antrim Shield where they were drawn to play Ards just three days after the Bangor game.  Glentoran won on penalties 5-4 on penalties after an unexpectedly scoreless match.  Dayle Coleing saved from Ruairi O’Hare before Jamie McDonagh converted the winner.

Next up was the league opener. The Glens faced Cliftonville at Solitude and fell to a 1-0 defeat making it the second time in three years they had lost to the reds on the opening day.

The defeat began a difficult start to the league season. The defeat at Solitude was followed by a 1-1 draw at home to Glenavon before suffering a 2-1 loss at Coleraine.

Elsewhere Glentoran Women continued their positive start to their own league season with a 4-0 victory against Cliftonville with all four first half goals courtesy of Danielle Maxwell, Joely Andrews, Kerry Beattie and Caragh Hamilton.

The result came just days before five members of the squad would be called up to the Northern Ireland squad. Goalkeeper Jackie Burns, Nadene Caldwell and Samantha Kelly were joined by goal scorers Danielle Maxwell and Joely Andrews on international duty for the Euro 2022 qualifier to Belarus.

This was accompanied by more good news coming from the club as Glentoran teamed up with 247.tv to make home league fixtures available to stream. The move was decided with it still unclear how many fans would be able to get into the Oval due to Covid-19. It was also announced that season ticket holders would have free access to the streams.

Before the month was out there was also time for two first team players to be rewarded for their successful year. 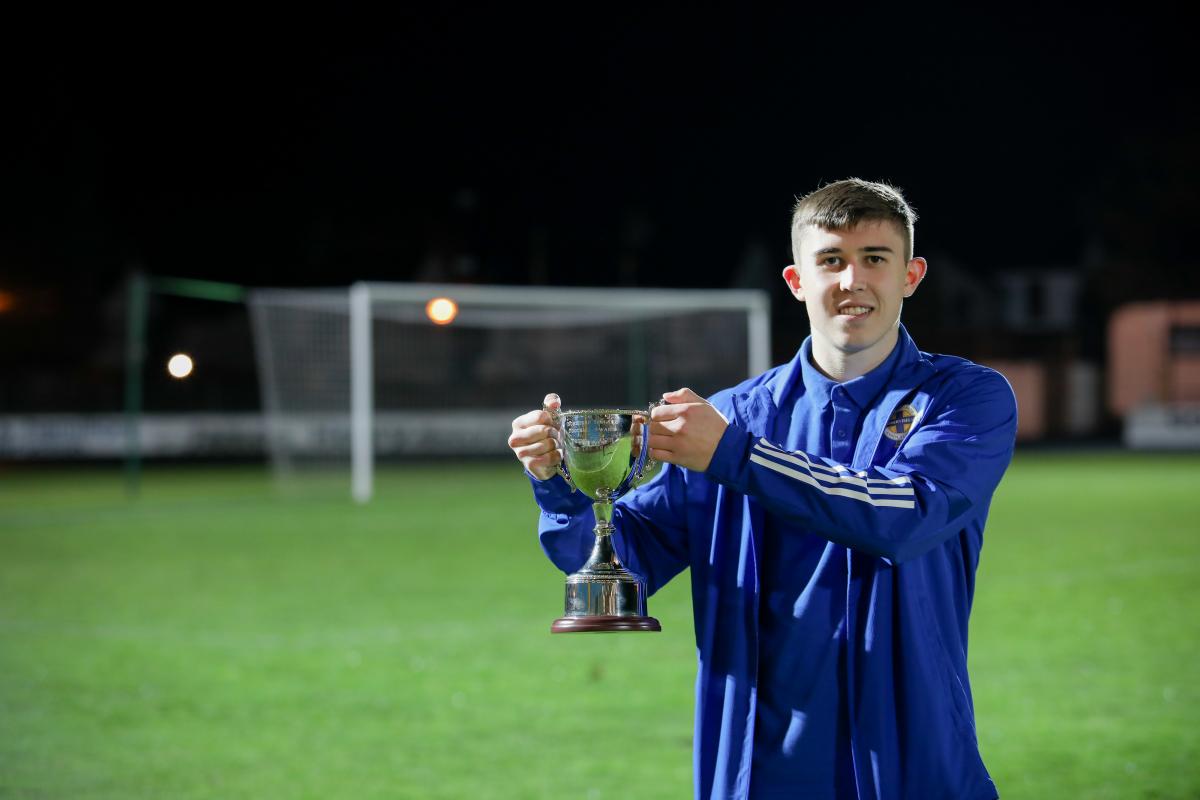 Paul O’Neill with his Young Player of the Year award

“Paul thoroughly deserves his Young Footballer of the Year Award. His scoring record over the course of the season culminating in an Irish Cup final win, and his all-round performances have made him the standout young player in our League. We saw further proof tonight as to the level of his talent, with his first start for the Northern Ireland U21s and two goals. I have said it before and will state again that with consistent performances he is bound for greater leagues than ours”.

This was followed by the announcement that Robbie McDaid had been voted as the Glentoran Player of the Year for the second year in a row. Castlereagh Glentoran Supporters Club hosted the vote for the 63rd consecutive year and Cup Final hero Robbie came out on top with an incredible 67% of the vote.

The start of November saw the men’s side get revenge for the events of two weeks before, beating Cliftonville at Solitude. The 1-0 win away from home secured qualification for a second cup final of 2020, this time the County Antrim Shield. The result was courtesy of a goal from a Dale Gorman strike in the closing minutes.

That win spurred the side on to achieve more positive results in the league. A 0-0 home draw to Larne was followed by a thrilling 3-3 draw at Windsor Park.

The Big Two game against Linfield was one which both teams felt they deserved all three points. After a relatively quiet first half it was 1-0 to the home side with the goal courtesy of Jordan Stewart.

However, the second half was a much more exciting affair. Following a Paul O’Neill equaliser, Shayne Lavery put the home side in front from the penalty spot. The lead didn’t last long as the Glens equalised once again. The second goal came courtesy of Jay Donnelly as a result of an excellent Dale Gorman ball into the box.

With the game entering the closing stages, good link up from Paul O’Neill and Jay Donnelly saw the latter find Robbie McDaid in acres of space. After bringing the ball under control McDaid slotted home the third Glens goal. Sadly, we didn’t hold out for a deserved win as a Jimmy Callacher headed equaliser was the last action of the match 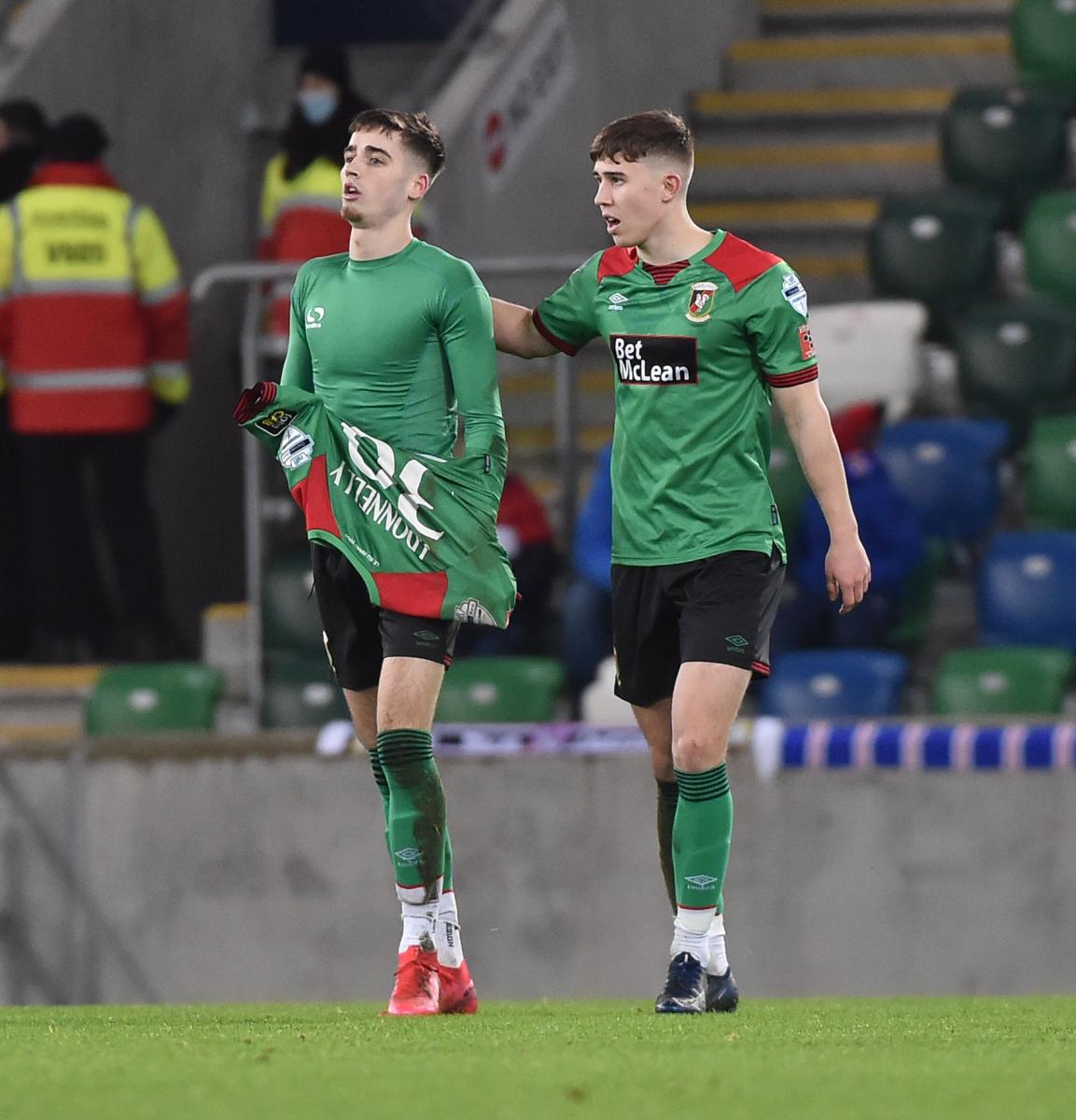 Just days later came the first league win of the season. A 5-1 win against Dungannon Swifts came through goals from Paddy McClean, Robbie McDaid, Paul O’Neill and two from Jay Donnelly. Donnelly’s goals and overall performance helped him seal the club’s Player of the Month award for November.

Glentoran Women continued their excellent start to the league campaign as they picked up two wins and six points in unusual circumstances. They were awarded two 3-0 victories by the NIFL Women’s Premiership Management Committee after both Derry City and Crusaders were unable to field teams. The Glens thus went six points clear at the top of the table and with only two games left to play the title was very much within our grasp.

The women also had another six players called up by Northern Ireland to face the Faroe Islands at Seaview when victory saw NI secure a first-ever play-off spot for the rescheduled finals in 2022.

Away from the pitch there was more positive news. The Irish FA announced that all Northern Ireland Football League (NIFL) clubs would each receive a share of £450k of financial support as part of a unique partnership with The National Lottery.  The partnership with The National Lottery will provide vital support as clubs are either forced to play without fans or not able to play football at all, owing to COVID-19 restrictions.

December began with the County Antrim Shield final. Glentoran made eight changes to face Larne with only Rory Brown, Marcus Kane and Chris Gallagher having played the game against Dungannon. After a relatively quiet game the score line finished 0-0 and it went all the way to penalties. With it tied at 3-3 Larne's Jeff Hughes converted the final spot kick to give the East Antrim side their first senior trophy since 1987.

The result was then followed by a trip to Seaview in the league. Unfortunately, it was another poor result for the Glens who fell to a 2-0 defeat to Crusaders with goals from Jordan Forsythe and Ross Clarke.

However, the Glens bounced back from two negative results with a thumping 6-0 win over Carrick Rangers as a Robbie McDaid hattrick, a goal apiece from the Donnelly brothers and a brilliant goal from Plum gave McDermott’s men their biggest result of the season so far.

The side would still have time for two more games before the year was out. The thumping of Carrick was followed by a 0-0 draw with Warrenpoint at the Oval, while the final game of 2020 also saw the points shared, this time it was at the Ballymena Showgrounds as the Glens drew 1-1 with United.

The final goal of the year came in the final moments of the match. Marcus Kane’s low driven effort from 25 yards earned the side a point having trailed for most of the half.

Entering a new year there will be the re-opening of the transfer window with the club having secured a very significant signing before end of 2020 when Rhys Marshall joined the club from Shamrock Rovers on a three and a half year contract. In other excellent news, the fully recovered Hrvoje Plum signed a new deal keeping him at the club until summer 2022.

Elsewhere the Glentoran Women’s side brought their season to a close on the most positive note possible. The side beat Crusaders 2-0 at Seaview with goals coming from Samantha Kelly and Sarah Connelly. By winning the game the Glens had done enough to seal the league title making it their first in six seasons.

Glentoran remain Northern Ireland's most successful club in Women's football as this was the Glens' record eighth championship win since the inception of the league. 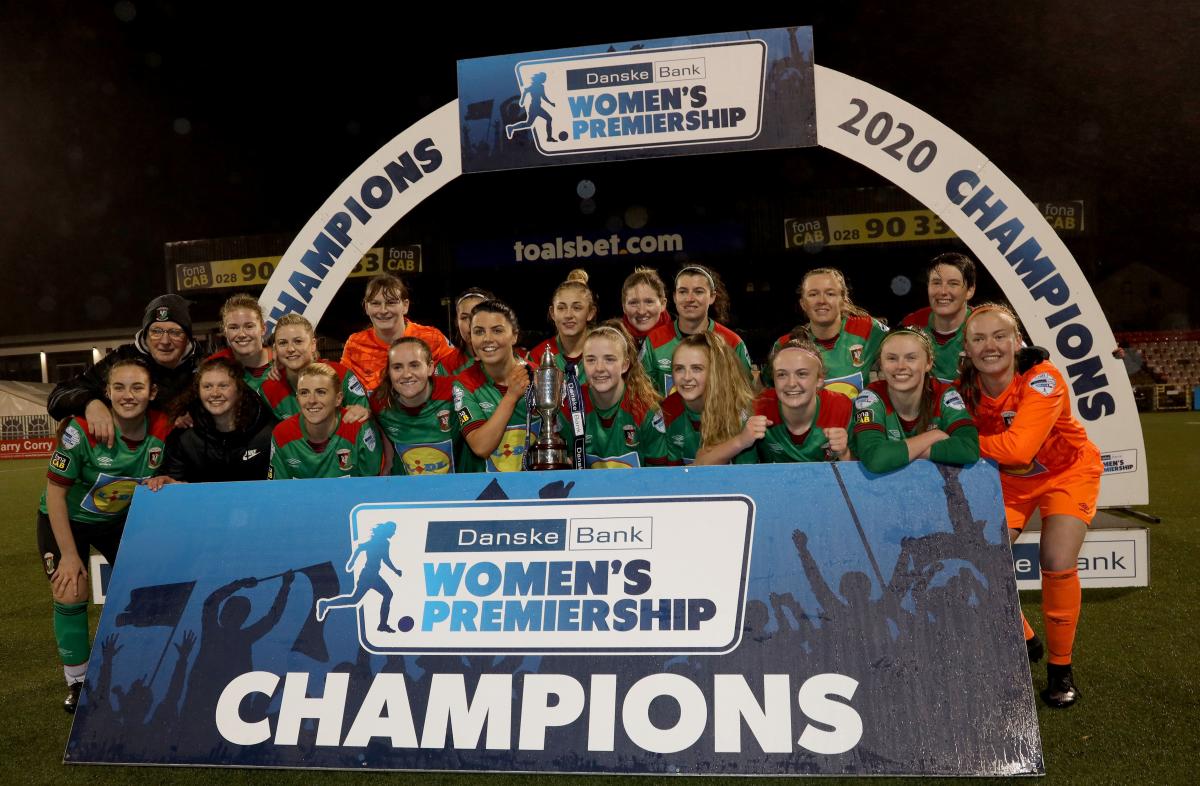 December is always a time for going into the community and this year was no exception. First off, the club joined in the 100th birthday celebration for the Beersbridge Road’s Jean when the club and the staff at Giboney House arranged a surprise visit from the Irish Cup.

Jean told Glentoran’s Colin Jess: ““I can’t believe it. I’m so grateful for everything and getting to put my hands on the cup. My husband Sammy would have been so delighted. He and four of our friends set up the Victoria Glentoran Supporters Club”. 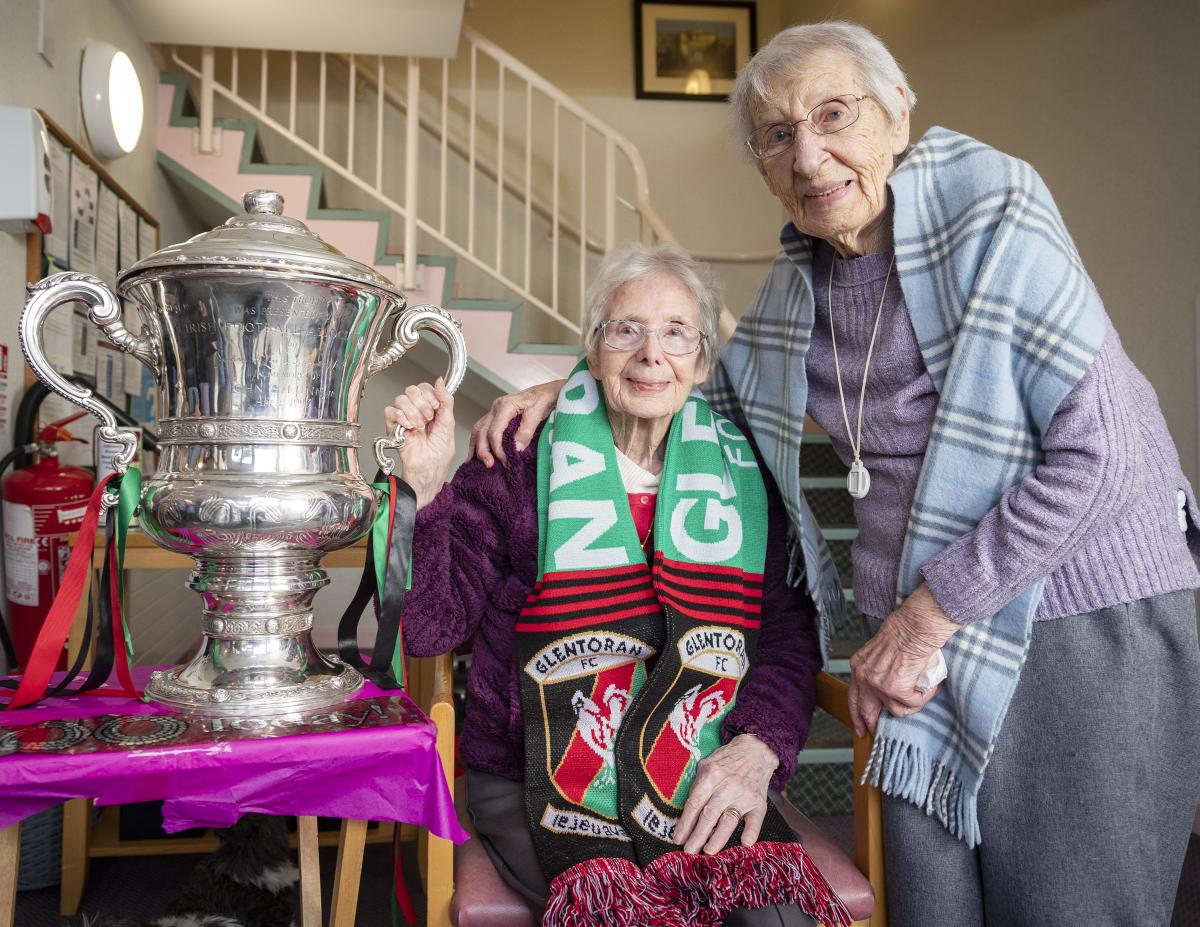 Jean and her sister Isabel with the Irish Cup

Finally, it was a very different Glentoran Christmas Appeal for Jodie and the team this year, but the good work and generosity of the Glentoran Family was never more necessary as the club staged the appeal for the seventh year. In total the cash donations totalled just over £3,000. This was then topped up by a very generous personal contribution from the club and Glentoran’s majority shareholder, Mr Ali Pour. Rory Donnelly and his fiancé, Grace joined the team on December 23rd to distribute subsistence packs to homeless people around the city.