Following a fantastic strike from Peter McMahon, Coleraine grabbed a late equaliser at the Oval on matchday 3 of the Danske Bank Premiership.

Glentoran came back to lead after going a first half goal behind but for the second home match in a row a very late and avoidable goal deprived us.

The Glens started today’s match with an unchanged starting line up for the third game in a row. New signings Sam Byrne and Joe Crowe started on the bench.

The first half started fairly quietly with the Glens goal not threatened until the eighth minute when a well flighted Coleraine free kick deceived the whole defence before going wide of the far post. Elliott Morris seemed to have it covered anyway.

On the sixteenth minute a strong move saw a good ball from Ross Redman find Peter McMahon in the Coleraine box but the move was foiled by a theatrical dive by Coleraine captain Stephen O’Donnell. Not for the last time the referee was easily deceived in this way. Not long afterwards we had another scare with a goalmouth scramble cleared by Marcus Kane. 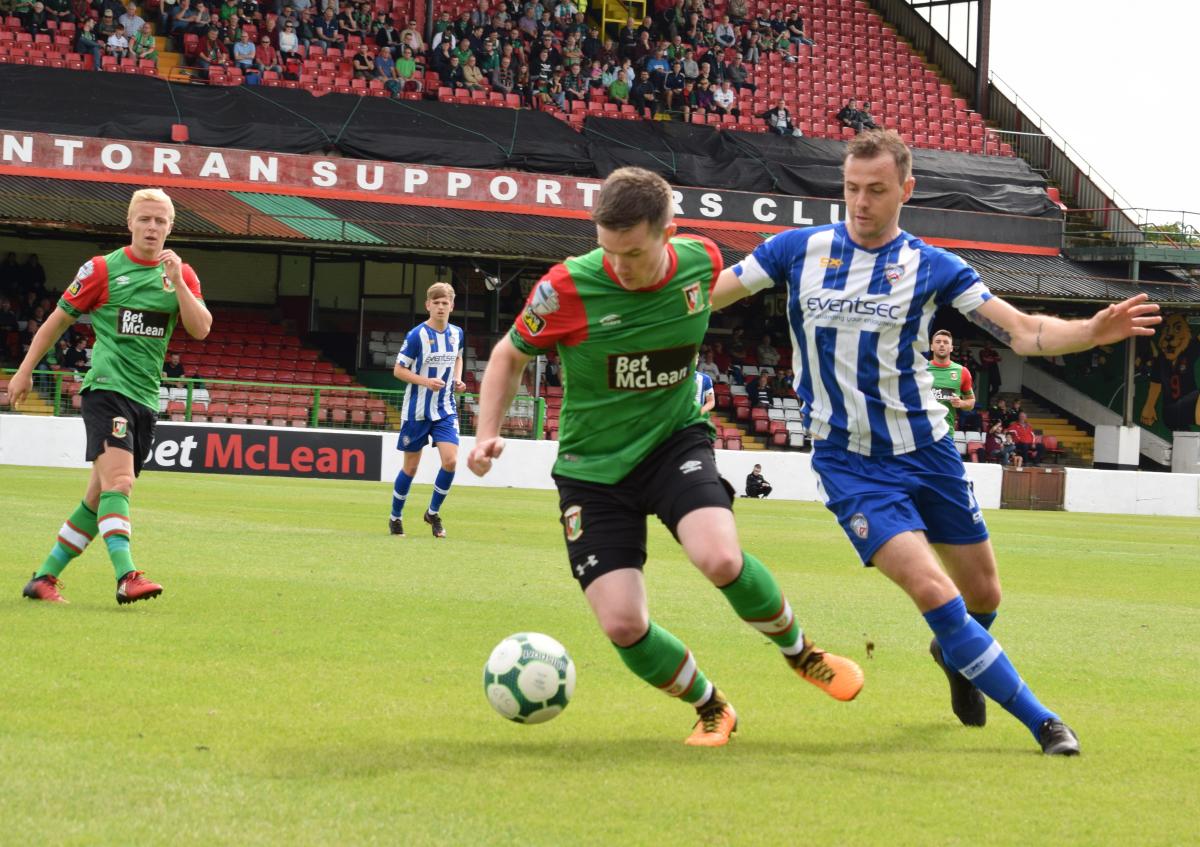 After 34 minutes Elliott Morris made a brilliant block save after Aaron Burns exploited our hesitant left flank.

We came more into the game as an attacking force when a brilliant, surging run by John McGuigan was wasted by Dylan Davidson, while two minutes later our first real chance saw McGuigan shoot wide.

Coleraine took the lead after 40 minutes when from a corner, Brad Lyons easily jumped above the static Ross Redman to head past a helpless Morris. So at half time we went in a goal behind. Maybe a slightly harsh scoreline but we hadn’t taken advantage of the chances created.  Half Time Glentoran 0-1 Coleraine

The Glens started the second half unchanged but the visitors brought Eoin Bradley on for Aaron Burns. Bradley’s introduction did add another dimension to the match. A dimension the referee seemed to struggle with.

The Glens equalised three minutes after the restart. Dylan Davidson did very well to win a free kick on the right flank.  Dylan took the kick himself.  It was dummied by Marcus Kane and fell straight to Curtis Allen who easily guided it home for his 97th goal for the club. 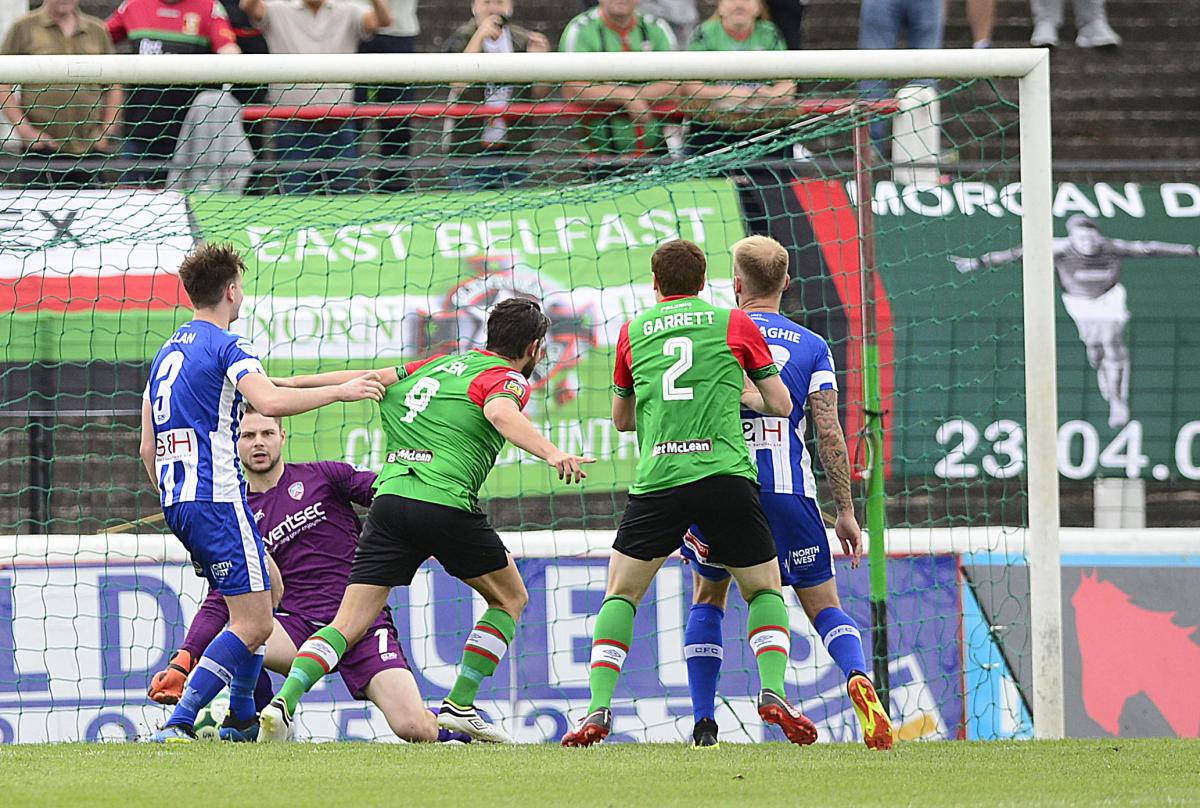 Peter McMahon was starting to come into the game in more central positions. On 55 minutes he brought a good save out of Chris Johns after a fast and incisive pitch length move involving Conor Pepper and Nathan Kerr. Five minutes later Peter picked up the ball in the centre circle, took three touches before unleashing an incredible, unstoppable right foot shot from a full 35 yards out that gave Johns no chance as it flew past him to his right hand side. 2-1 Glens! 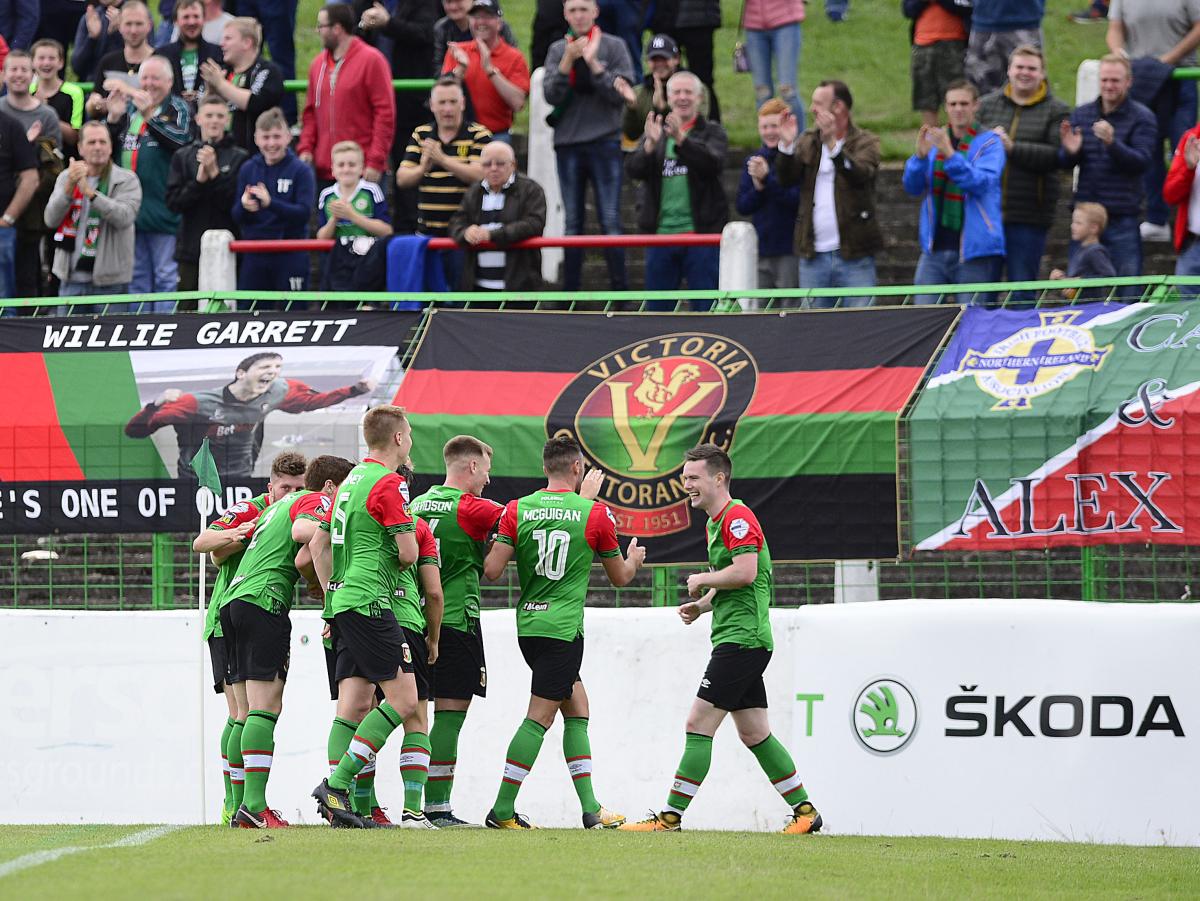 Two minutes after the goal we had a good chance to make the game safe but Curtis Allen headed just over after a good move involving Davidson and McMahon.

Conor Pepper picked up his third yellow in three games for a robust tacke to stop a Coleraine break. Three minutes after that Coleraine had a penalty appeal for a Willie Garrett tackle on Bradley. It was refused. No great surprise as Bradley had already gone down very easily more than once in his 15 minutes or so on the pitrch. Soon afterwards Bradley hit the crossbar from an inexplicably awarded free kick on the Glens’ 18 yard line.

Subs Crowe and Byrne made their debut bows on 74 minutes. Crowe replaced Marcus Kane who had gone down after a touchline tackle while Byrne came on for Dylan Davidson. Crowe replaced Kane in midfield while John McGuigan moved out right.

The Glens were holding out reasonably until  the 87th minute when Darren McAuley – usually such a torturer of Glens defences but kept uncharacteristically quiet by Nathan Kerr this afternoon – broke left and hit an excellent cross into the box. In a mirror image of Coleraine’s first goal it went across the goal where Ross Redman was again easily outjumped, his time by Eoin Bradley who had a relatively straightforward headed finish.

The only other incident was in injury time when debutant Joe Crowe was booked after the referee seemed to miss three fouls on Glentoran players.

Another late sucker punch and another result hard to take for Glens supporters. But we need to bear in mind that today we were up against an excellent team on an incredible run of league form and full strength.  An encouraging result despite the late equaliser. 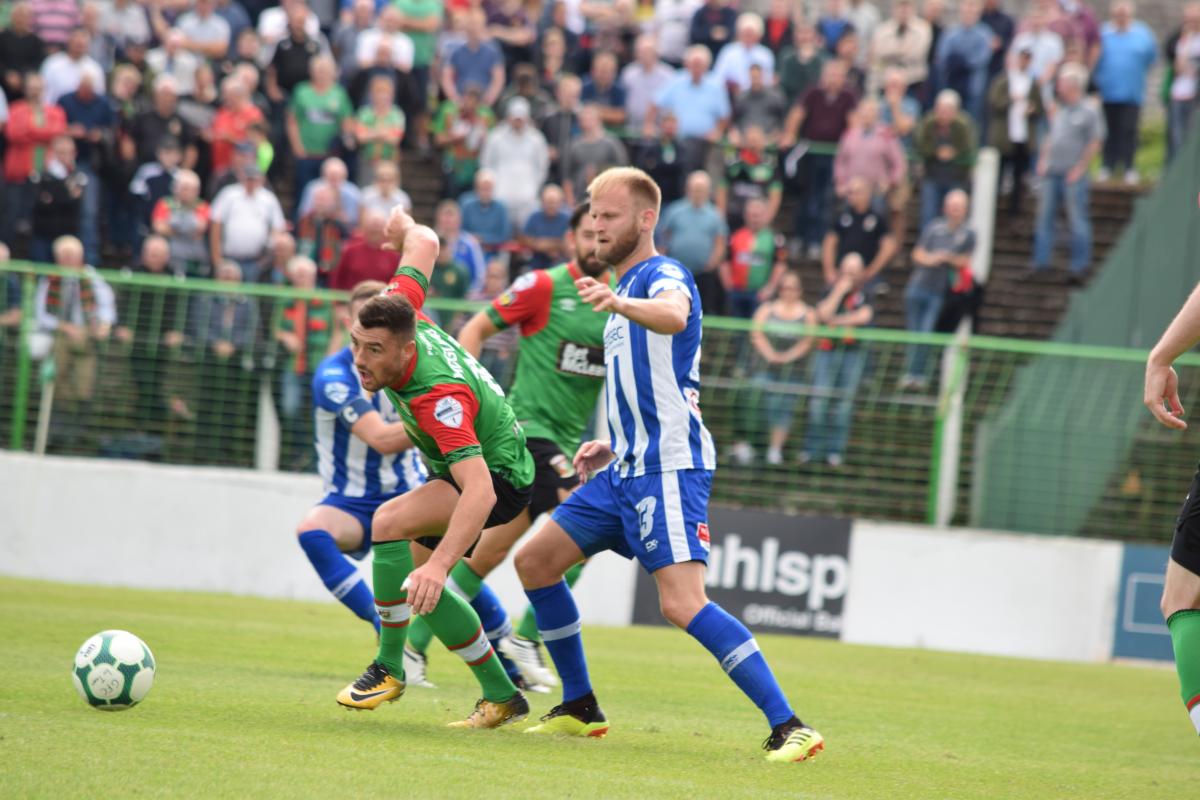 Photographs by Pacemaker and AM Photography NI 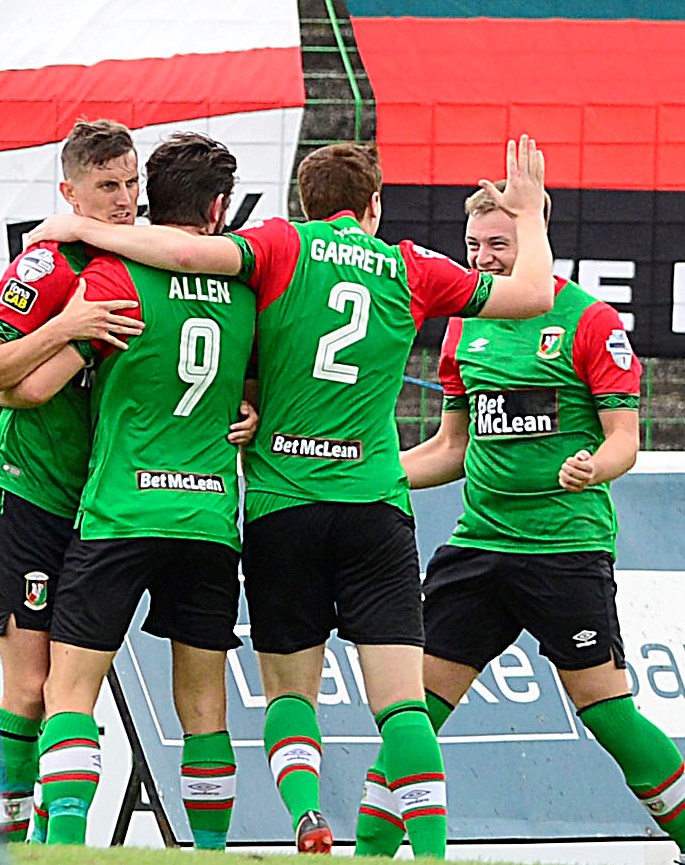