Glentoran took up today’s game where they left of against Carrick Rangers last week and with one or two exceptions failed to provide any meaningful challenge to bottom of the table Ballinamallard at the Oval.

With a few players out injured today Ronnie McFall gave a first start of the season upfront to 18-year old Paul O’Neill with Christopher Conn (16) and James McCarthy (17) both on the bench for the first time. The other changes to the starting line up were Dwayne Nelson in goal for the first time in the league this season and Stevie Gordon in for James Knowles. John McGuigan and Robbie McDaid were both recovering from injuries.  Pre Kick-off Curtis Allen was presented with the Glentoran Player of the Year Award from the Castlereagh Glentoran Supporters Club (separate story to follow).

First chance of the game came after 3 minutes when Marcus Kane (one of the few Glens players to escape criticism today) headed into the side netting after a well hit corner from Gordon. Four minutes later Dwayne Nelson punched clear after bedlam in the Glens defence, a sign of things to come.

After 14 minutes Paul O’Neill made a great solo run to create a chance for himself but had no support when it fell free when the keeper blocked it. Almost straight away a speculative but seemingly innocuous ball into the box led to Mallards’ opening goal. Nelson failed to come for the ball and Sean Noble easily ran between the motionless Addis and Redman to nod a free header into the net. Easy but completely avoidable goal. 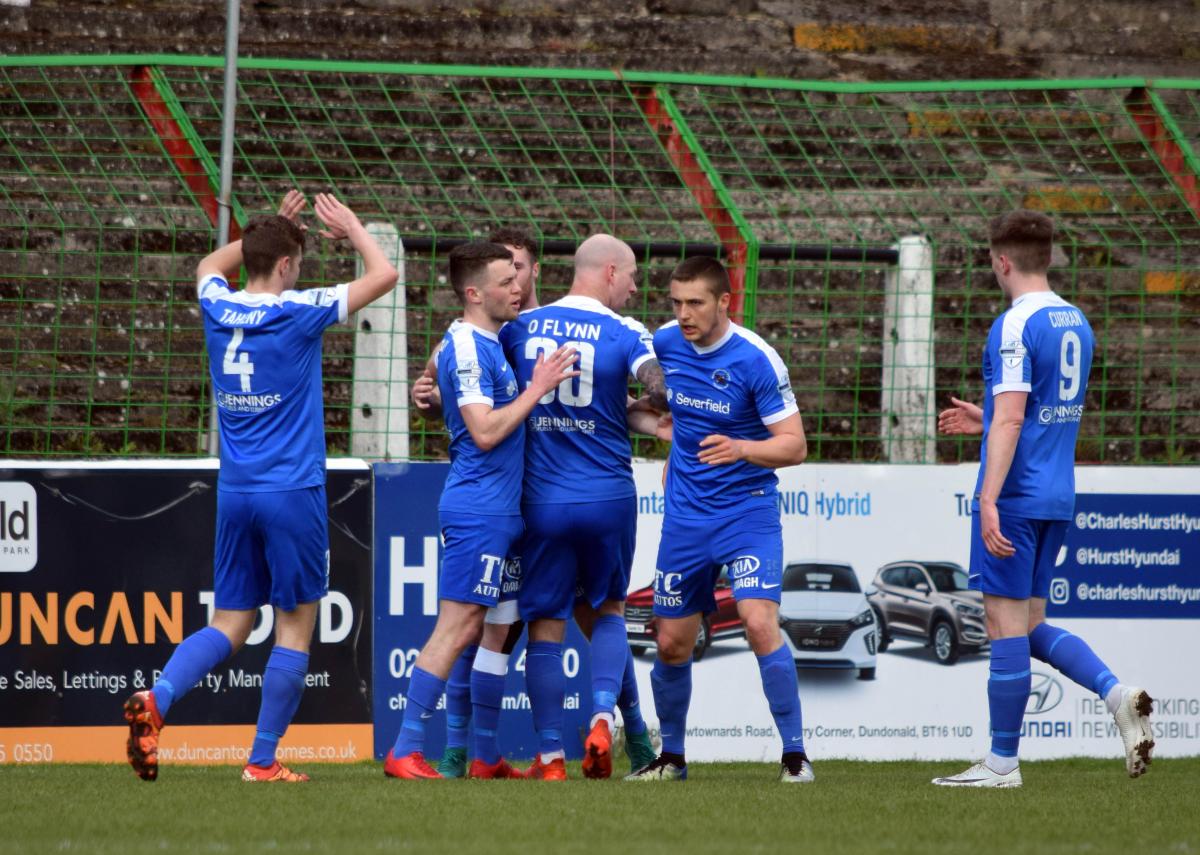 There were a number of chances in the first half but frankly neither goal looked under any serious thread. After 25 minutes Calum Birney headed into the keeper’s arms from an Addis throw. Three minutes later O’Neill had a long range shot high and wide. In the 41st minute we had a decent chance when Birney cleverly headed on an Addis throw but Curtis Allen headed meekly into the arms of the keeper and one minute before half time Dylan Davidson hit a long range shot over the bar.

Five minutes into the second half Allen was very unlucky after Birney again flicked on an Addis throw from the left and shortly afterwards a driving  solo run through the middle from Marcus Kane found Dylan Davidson wide left but his good cross was cleared for a corner. A minute later Allen shot over from a McMahon corner. In the 64th minute Gordon was replaced by Alex O’Hanlon in centre midfield.

On 68 minutes Nelson made a great save from Curran after Davidson was caught in possession gave the ball away in midfield and Addis was out of position at the back. Davidson was then replaced by Christopher” Cricky” Conn. Immediately  afterwards Allen’s twisting shot was deflected o0ff Taheny and over the bar and Conn hit a deep shot into the packed defence.

Despite the Glens’ possession there was an air of inevitability about a second Mallards goal and it came on 73 minutes. Former Glens players Clarke and O’Flynn combined to get the ball across goal and with Nelson again hesitant Noble ghosted in for another easy finish. Eight minutes later Shane McGinty easily ran through the Glens midfield after McMahon had given the ball away in midfield for the third consecutive time, found McIlwaine on the left hand side of the box who lobbed Nelson without much difficulty for a third goal.  Immediately afterwards James McCarthy was introduced for his debut to replace Paul O’Neill who had worked hard all afternoon but had little support from more experienced team mates. Calum Birney then scored a late consolation.

Today’s result was a case of too little too late for Ballinamallard who are automatically relegated. Good luck to them in making a quick return to the Premiership. However these Glentoran players owe the supporters much better effort and vastly improved performances in the forthcoming Europa League playoffs if anything is to be salvaged from this train wreck of a season.