Glentoran's horrendous home form continued on Saturday as lowly Warrenpoint Town came to the Oval and compelled Eddie Patterson's side to their first defeat since Boxing Day. The fact that the game was able to go ahead at all is a credit to Sammy the groundsman, who battled valiantly with the swimming pool that the ground had become and ensured that the pitch was playable after referee Arnold Hunter conducted an 11am pitch inspection. We'd like to place on record our sincere thanks to the volunteers that came down to the ground before the match kicked off to aid Sammy in the clearing of the pitch.

With Stephen McAlorum both injured and suspended, Mark Clarke also unavailable as he continues his 6-match ban and Mark Miskimmin still sufferring from an injury sustained on New Years Day Patterson's squad was stretched right to the bare bones, though Steven Gordon - who was recalled from his loan spell at Ards during the week - made an appearance on the substitute bench. In truth, it was a really quiet opening with the pitch and conditions offering no respite to the Glens passing football. In fact, 31 minutes into the game Elliott Morris had Glentoran's first shot on target as a powerful goal kick was caught by the wind and forced goalkeeper Jonathan Parr to scuttle across his line and comfortably catch the ball. Then, seven minutes later Morris was again called into action as the shot-stopper made a smart save from Marty Havern after the Point broke quickly. Just a minute before half-time and Niall Henderson fired a volley inches over from a tight angle, and the whistle blew to indicate the end of a dull opening forty five minutes. 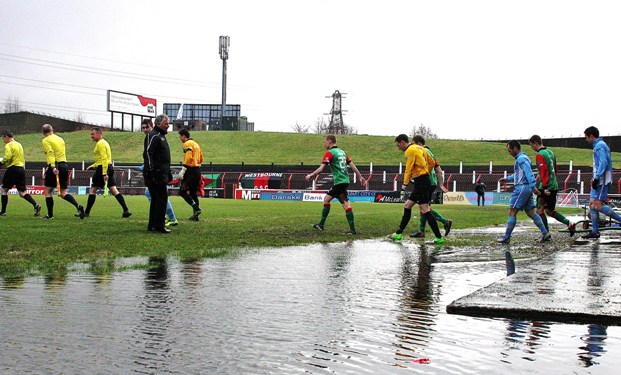 The second half will go down as one of the most frustrating Glentoran performances this season. Warrenpoint came out looking hungrier and sharper, with two corners in quick succession leading to Willie Garrett making an excellent blocking tackle as Daniel Hughes was preparing to pull the trigger. That proved to be a warning that the east Belfast outfit did not heed, as on 50 minutes Barry Gray's side deservedly went in front. A simple ball split the home defence and the lively Havren danced past Morris, steadied himself and rolled the ball into an empty net despite Calum Birney's best goal-line efforts. As the curse of the Oval seemed to be about to continue, the Glens pressed forward in desperate search of an equaliser as first Birney and then Marcus Kane had efforts blocked by Parr, and Jordan Stewart - who had an uncharacteristically quiet game - beat 5 Warrenpoint players with relative ease, only to watch his lofted cross float into the abyss as no green shirts had made an effort to get into the box. 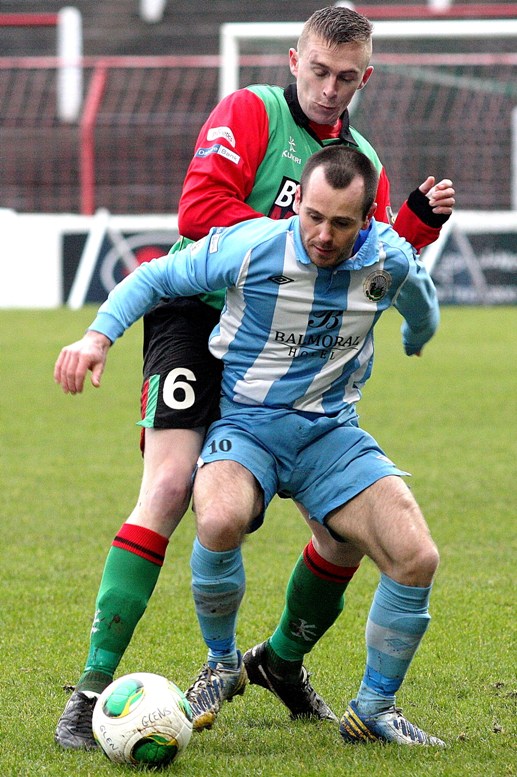 On 62 minutes Glentoran finally got the equaliser. Curtis Allen swung a cross into the area, and as claims for handball were turned down Aaron Boyd's persistence found substitute David Scullion, who turned in from two yards out and become the club's top scorer this season with 7 goals. It seemed as though the home team were back on the front-foot, with Kane trying his luck from thirty yards and fizzing the strike inches wide before Scullion, in search of a second, tried to loft it over Parr from a tight angle only for the delicate attempt to drift agonisingly wide of the upright. Indeed, the Glens were made to rue those missed chances as on 70 minutes the Point made it 2-1. A free-kick from the left was met by Stephen McCabe on the volley which Morris did excellently to repel from close range and as the home defence stood stationary, Padraig Smith smashed home into an unguarded net.

The Glens' found themselves behind yet again at the Oval and naturally as they pressed forward, that left gaps at the back which Warrenpoint almost exploited on a number of occasions. Firstly, immediately after the goal, McCabe beat the offside trap and squared for Halvern only for the forward to slam wide from six yards. Patterson's side came back with purpose though, as Curtis Allen chipped centimetres over the crossbar before Scullion nodded an Addis cross onto the bar. With just minutes left the home side attempted to nick a point, however Point defender Jonny Cowan made a wonderful last ditch challenge to deny Allen a one on one with Parr.

That makes it three wins, eight draws and eight defeats from the Oval for the Glens. It's a worrying statistic that needs to be put right. The pitch had a part to play, but the lack of creativity and all-round shakiness is a cause for concern for Glenmen. Next up is a crucial Irish Cup sixth-round tie away to Armagh City.