8-man Glentoran eventually succumbed to an 86th minute goal in today's Danske Bank Premiership match a the Oval. Having taken the lead midway through the first half Glentoran remained in front at the break despite being reduced to 9 men with both John Herron and Calum Birney receiving straight red cards. Glentoran skipper Marcus Kane was suspended for this game, James McCarthy coming in, and Connor Pepper had to sit it out due to a groin injury. Nathan Kerr returned to the starting line up following his Northern Ireland U21 duty and James Ferrin got his first start of the season in place of Willie Garrett. 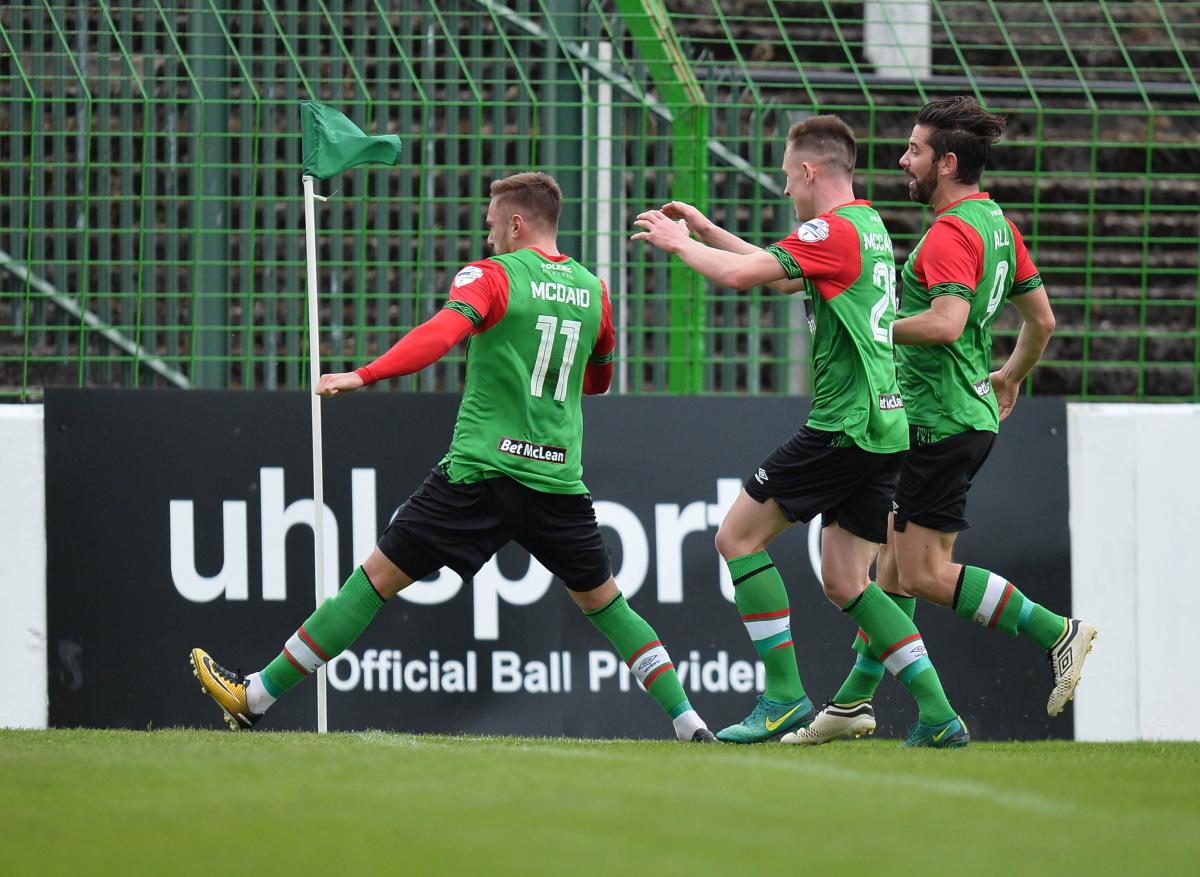 Trying to sum up the 97 odd minutes in this afternoon's game is difficult. On one hand you want to tell it as you see it but you also don't want to say something that might see the club end up with a fine! 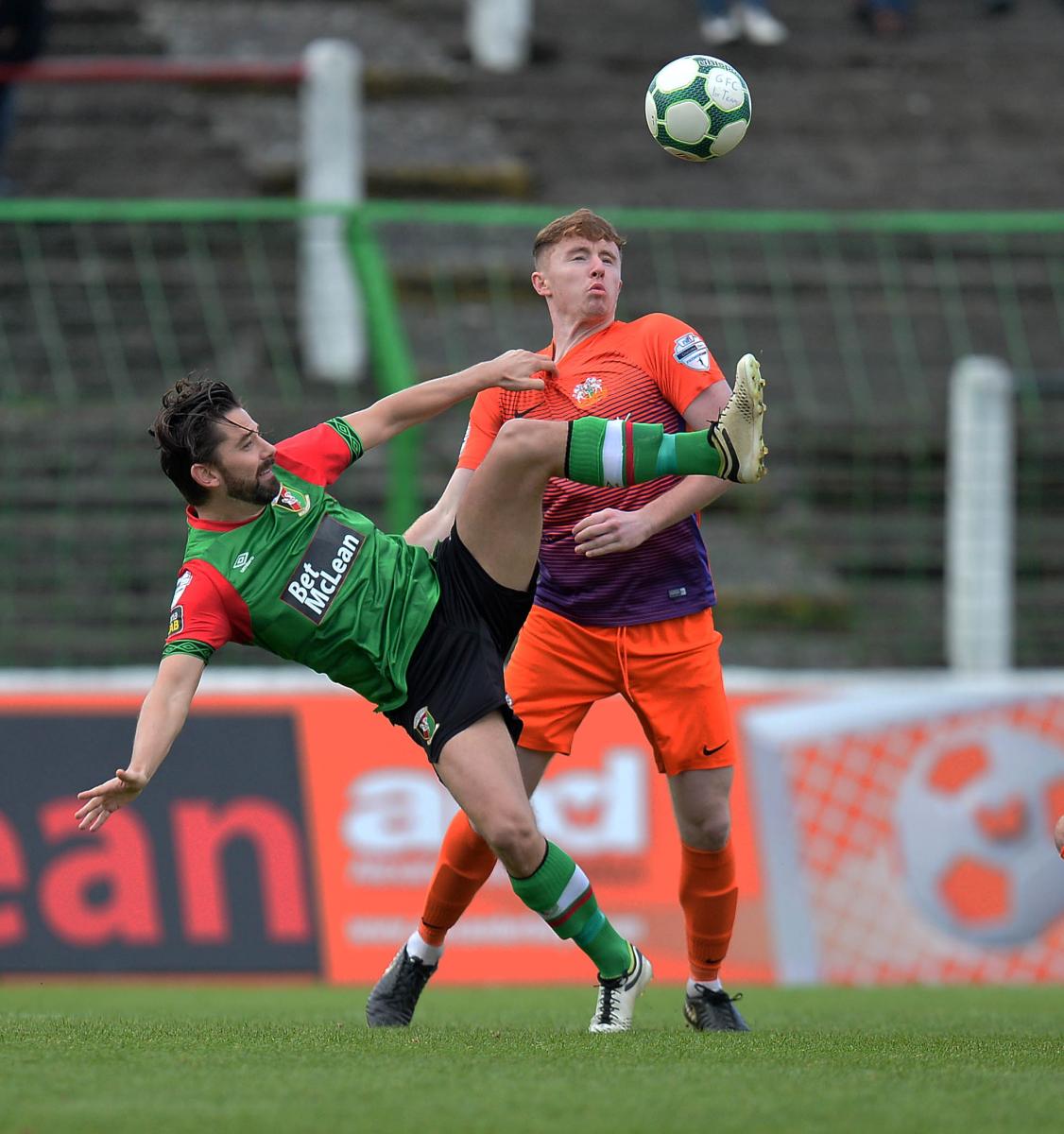 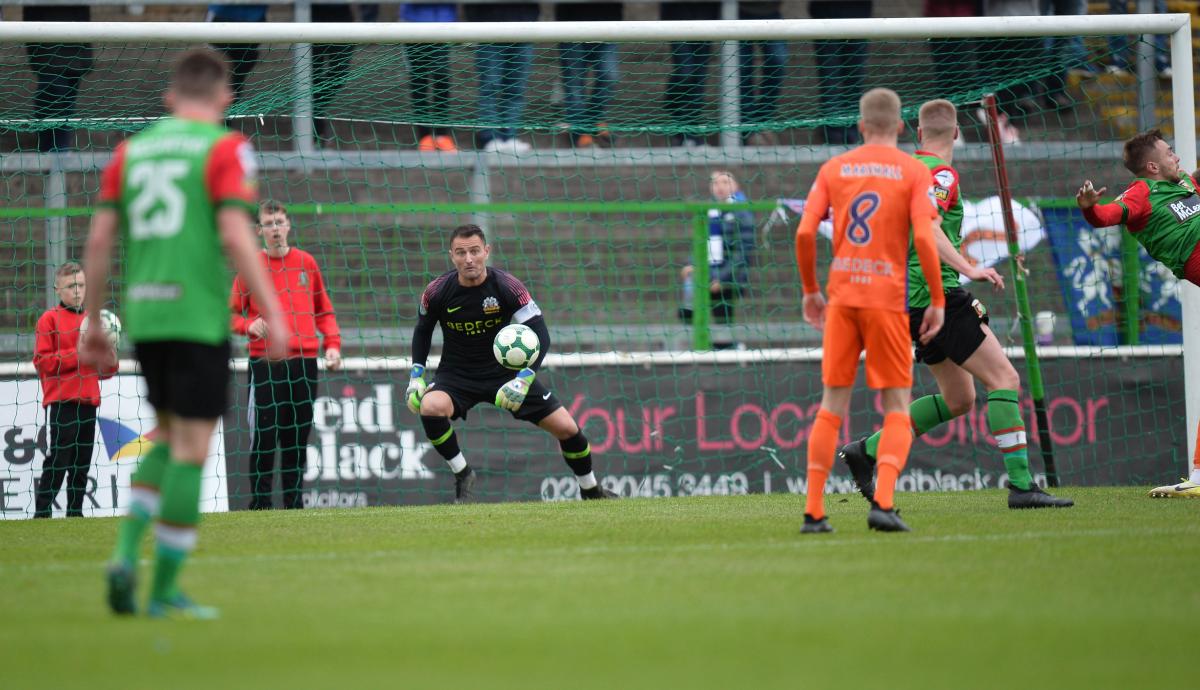 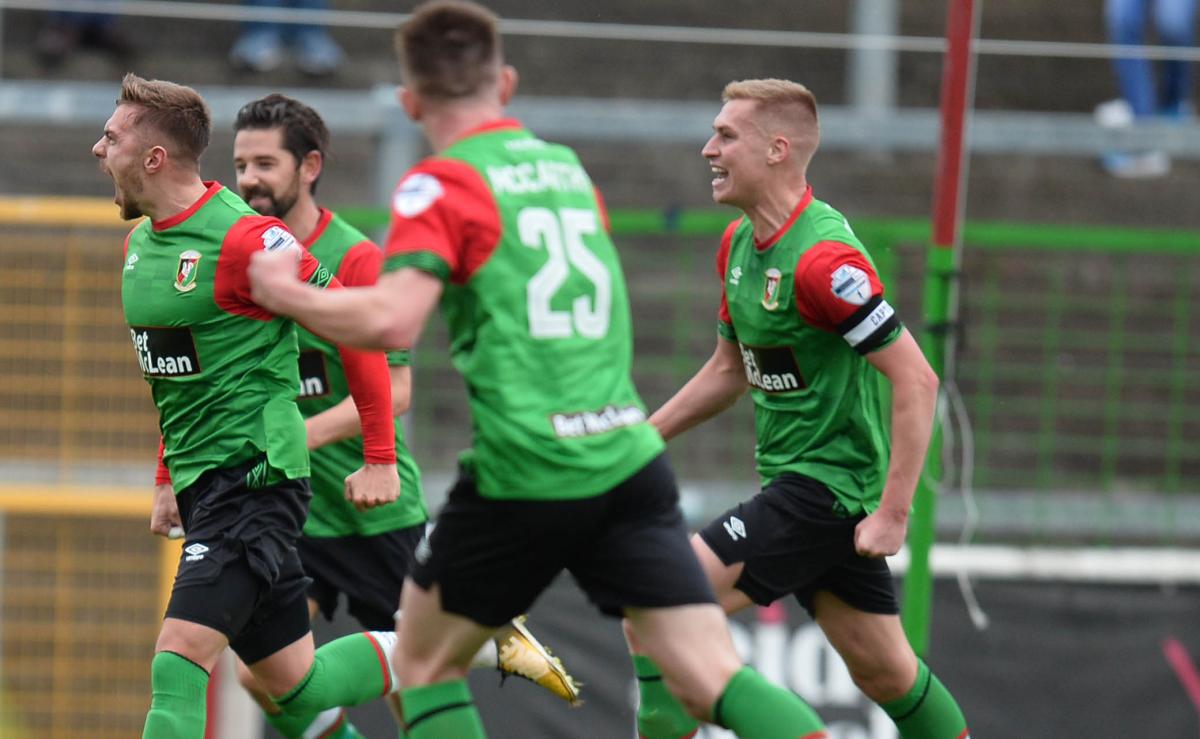 John McGuigan had the game's first effort on target but his 2nd minute strike, following a lay off from Curtis Allen, was straight at Jonathan Tuffey. Elliott Morris was called into action on 7 minutes, turning away a shot for a corner and from the resulting set piece the Glentoran defence had to put in two great blocks to prevent Glenavon taking an early lead. On 21 minutes Glentoran went in front. A Ross Redman free kick was partually cleared and Calum Birney did well to hook the ball back into the danger area. It eventually fell to John McGuigan and his cross from the right was headed home by Robbie McDaid. Less than 5 minutes later and the home side were reduced to 10-men. A challenge from John Herron in midfield was deemed to be a straight red card by referee Keith Kennedy. The decision seemed harsh to say the least and BBC footage of the incident shows that the FIFA official's view was partially obscurred by a Glenavon player. 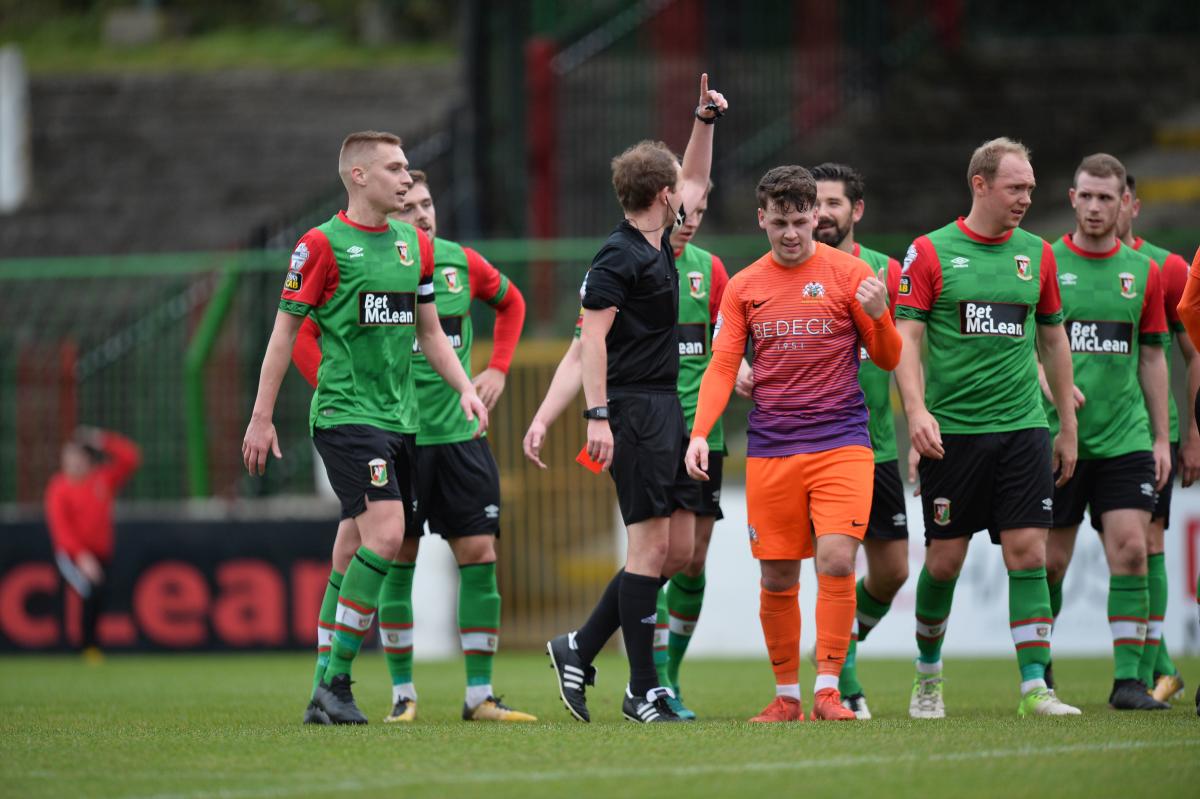 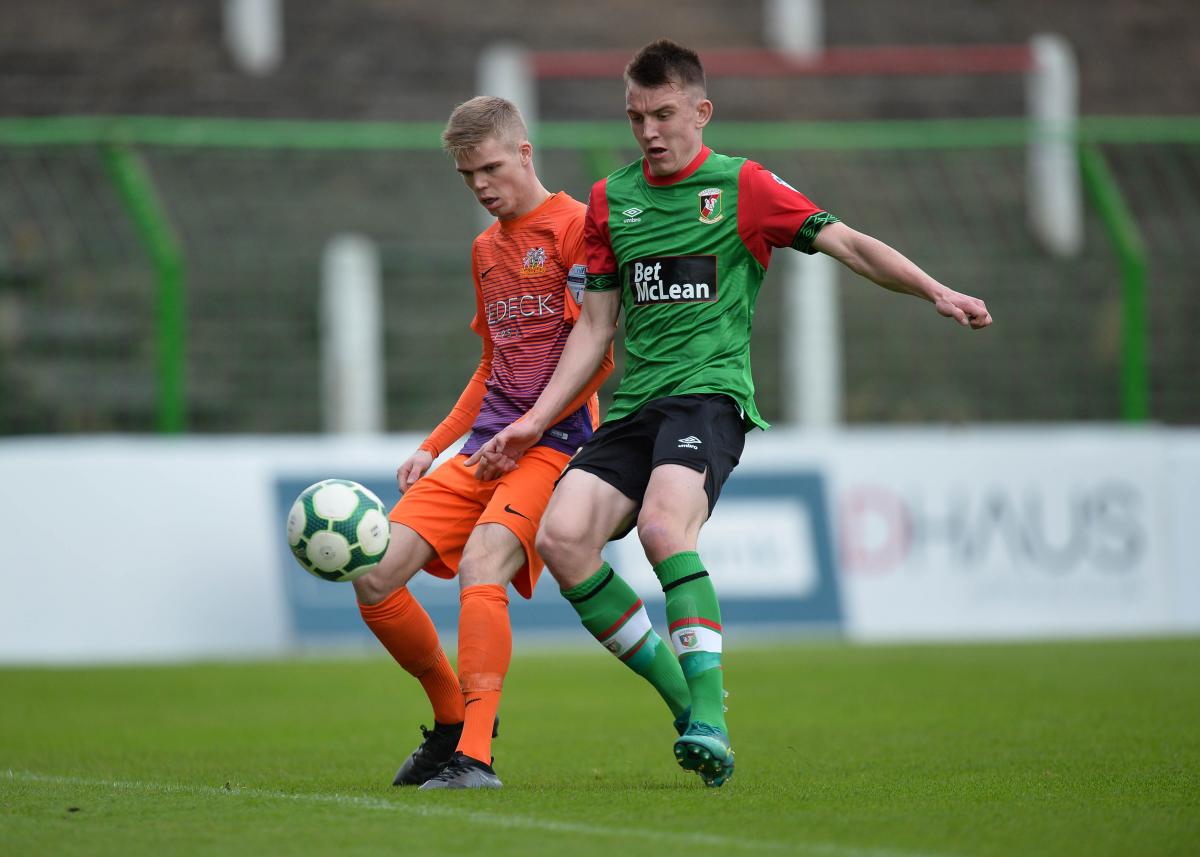 The home fans were frustrated and that continued when on 33 minutes Glenavon were awarded a free kick about 25 yards from goal. They opted to take it quickly but the alert Glentoran defence cleared the ball up field only for Kennedy to allow the kick to be re-taken! Ross Redman's corner on 40 minutes again found the head of Robbie McDaid but his effort was straight at Tuffey. From the clearance Glenavon broke over the halfway line and Calum Birney's mis-timed challenge brought down Mark Sykes. Again Kennedy produced a straight red card. 9-man Glentoran were now really up against it but reached the break with their 1-nil lead intact. 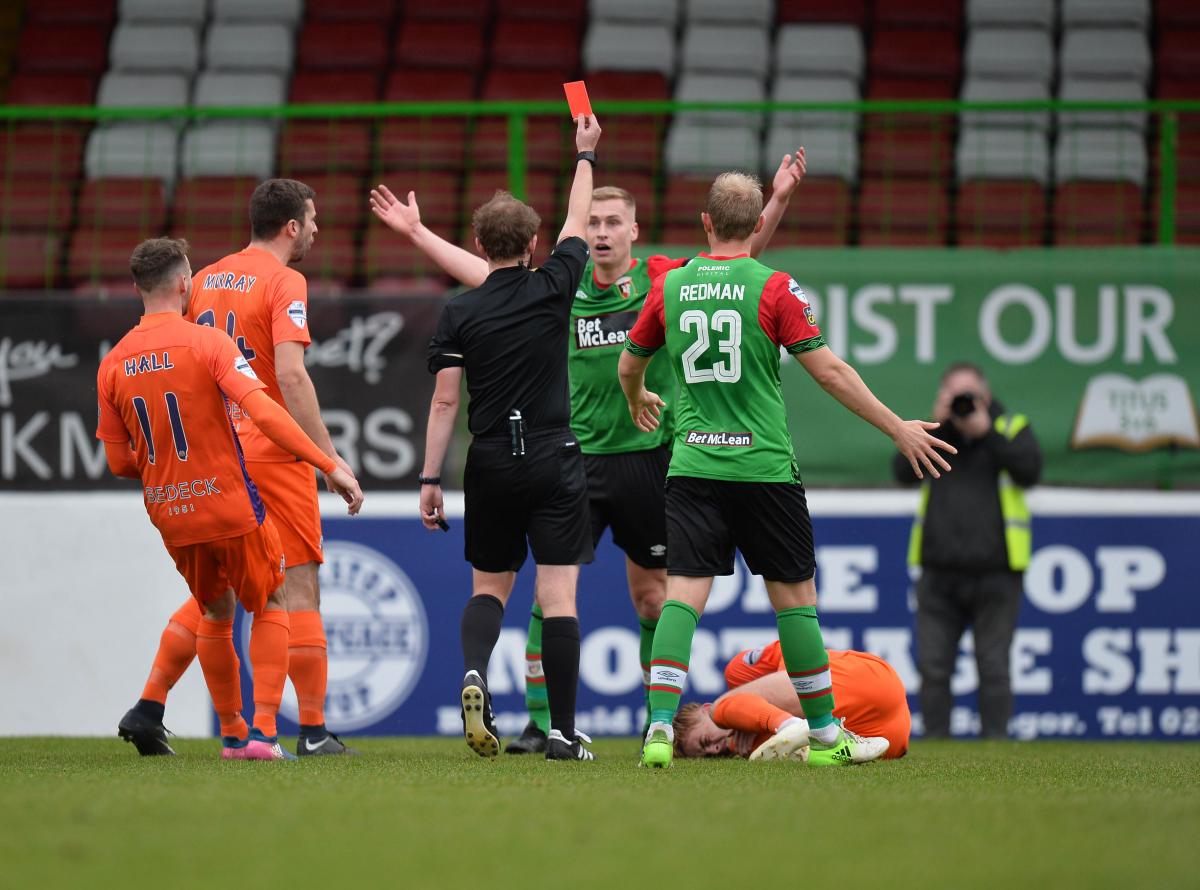 Around 10 minutes of the second period had gone when the visitors equalised. An Andrew Mitchell corner wasn't properly cleared and after the ball came back of the post, Andy Hall fired home from 4 yards. As expected, it was now very much attack against defence but with just 12 minutes remaining Glentoran forced a corner on a rare foray forward. Redman's corner found Willie Garrett at the back post and his header was cleared off the line with Tuffey stranded and another corner resulted. Again Redman found Garrett and again his header beat Tuffey. 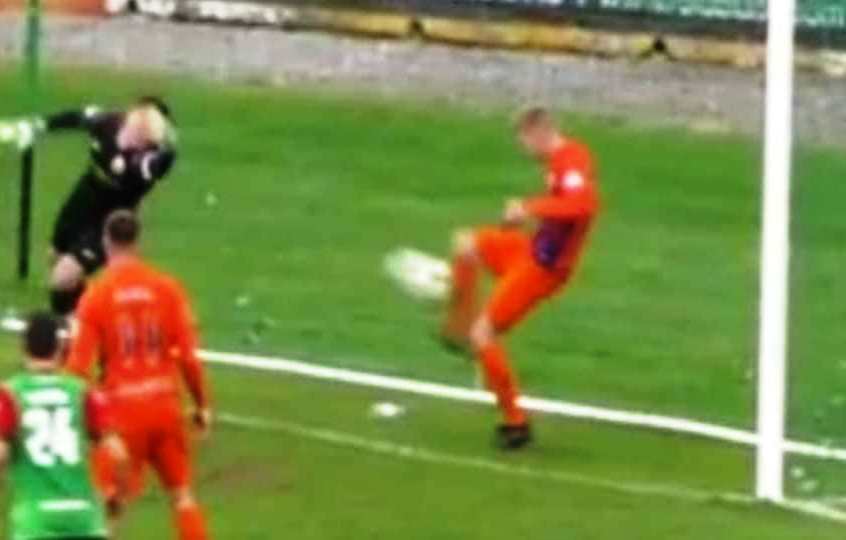 The ball appeared to cross the line but the linesman on the near side was unmoved! The Glentoran players in the vicinity were adamant that a goal should have been awarded and Kennedy showed yet another card, this time a yellow to Garrett for his protests. 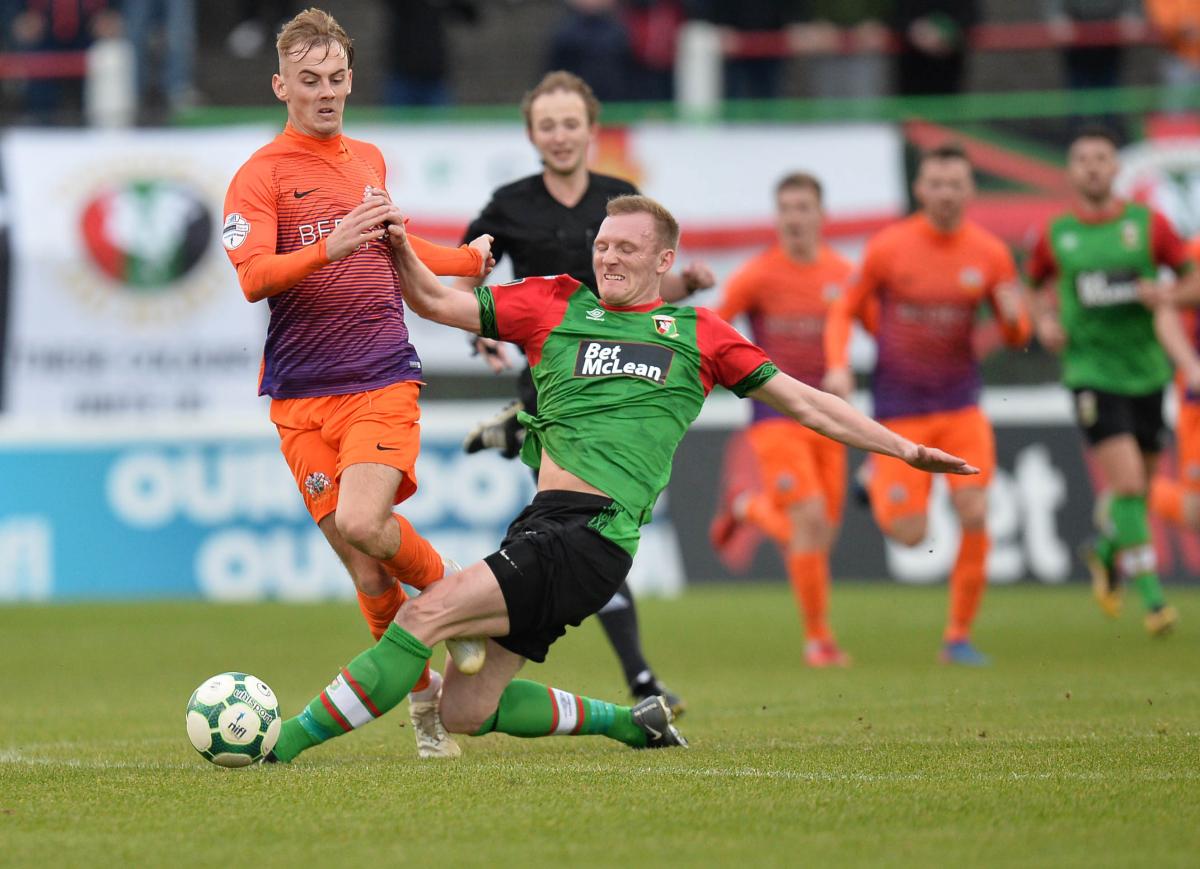 With just 4 minutes of normal time remaining Glenavon snatched the points. From a throw in near the corner flag (which incidently was clearly a foul throw - shown clearly on the BBC footage but missed again by the linesman on the near side), Elliott Morris kept out a shot from Murray but the ball fell kindly for Jenkins who couldn't miss from 6 yards. Glentoran almost forced an equaliser on the 90th minute; Willie Garrett's 30-yard swerving effort almost catching out Jonathan Tuffey. There was still time for Kennedy to dip into his pocket yet again, producing second yellow cards for both Garrett and Glenavon's Marshall for a 'handbags' incident in stoppage time. It was particularly harsh on Garrett as his first yellow was a result of what could be considered an error by the nearside linesman! As Glentoran broke forward for the last time John McGuigan was hacked down from behind by Stephen Murray. In many ways it was similar to Calum Birney's first half tackle.....there was no red card on this occasion though; just a yellow from the FIFA rated official! 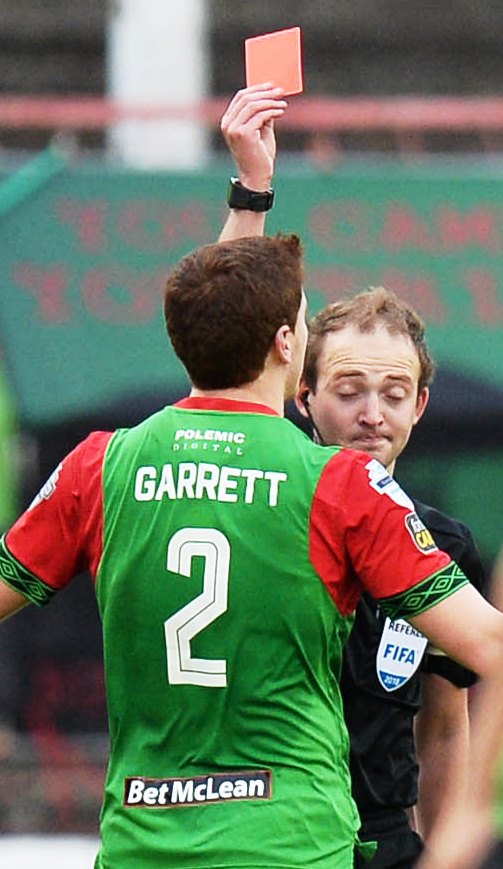 All in all a very frustrating afternoon. On the positive side though, what a backs to the wall performance from Glentoran. We almost grabbed a draw; a draw that would have felt like a win. Well done guys. We go again on Tuesday night. 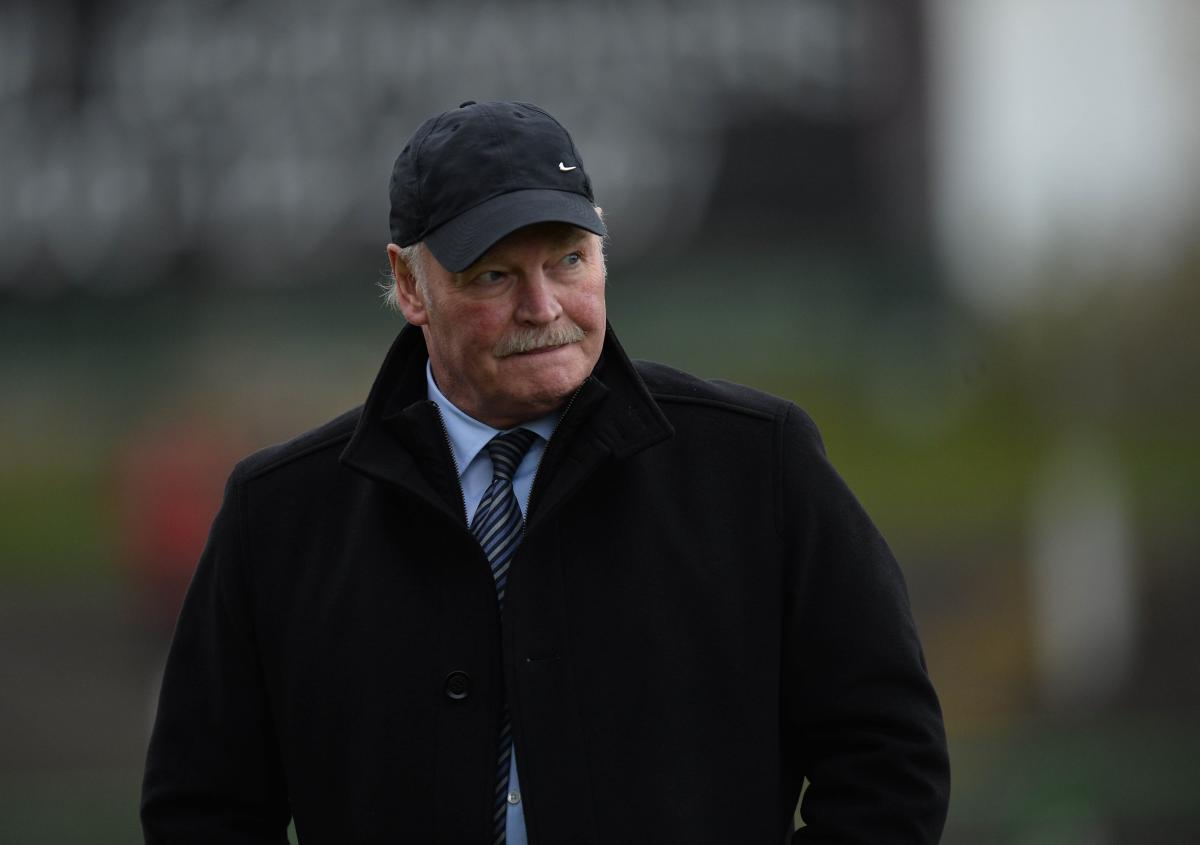