It was an uninspiring game at a very windy Oval this afternoon, Glentoran dominating the opening half before conceding another disappointing goal just before the interval. With Kym Nelson seeing red moments later the Glens had the chance to turn the game around in the second half against 10 men but only managed to beat Samuel Johnston in the Ards goal only once. 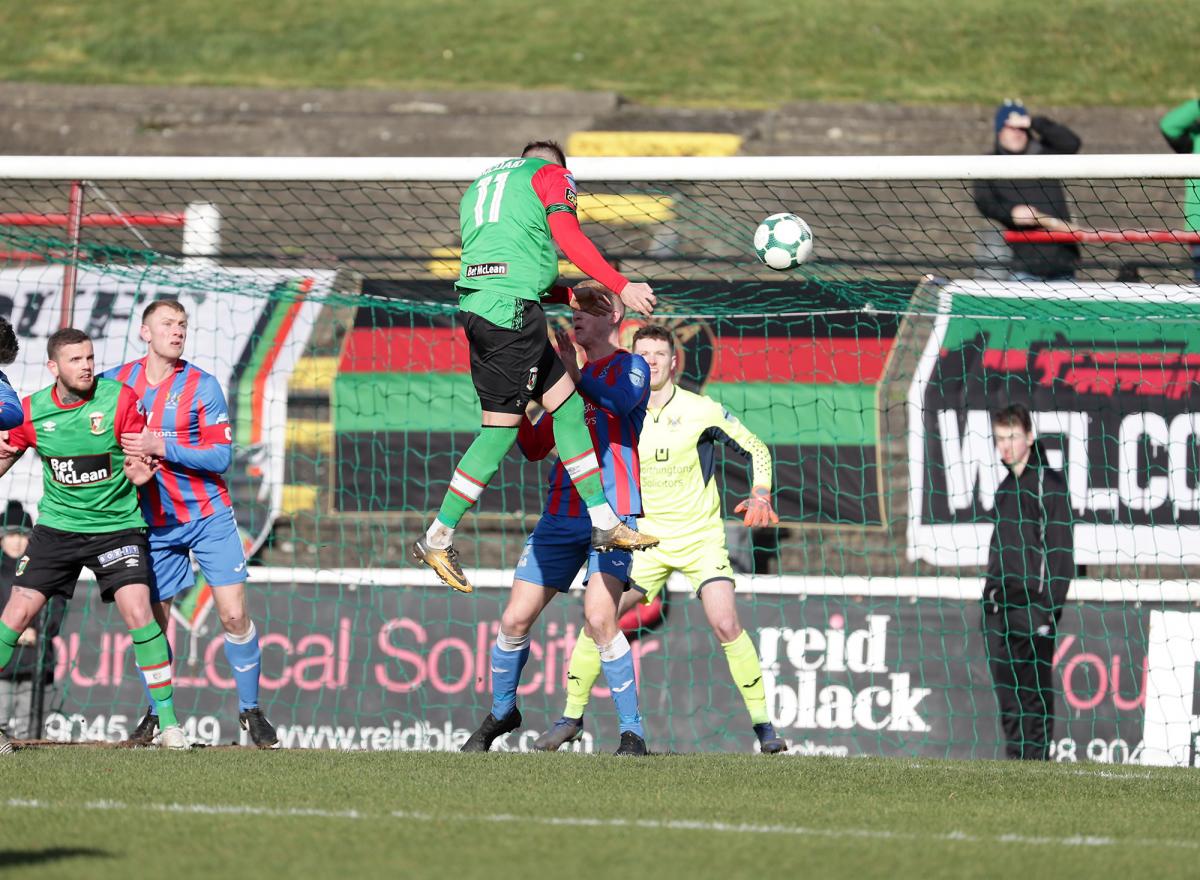 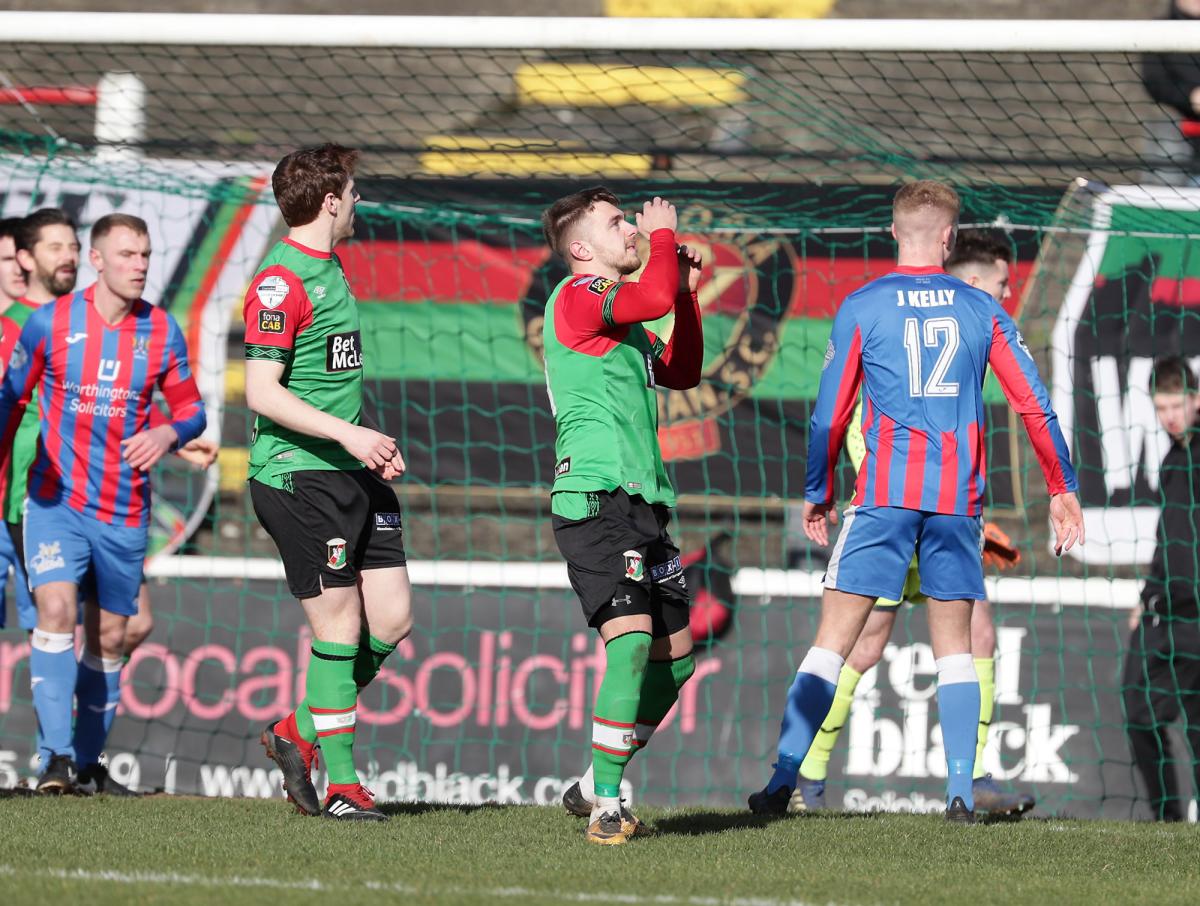 Chris Gallagher's 10th minute corner picked out Robbie McDaid in the area; McDaid's header flashing inches wide of the post at the Sydenham End. It was McDaid who had the next opportunity too when a great ball into the area from skipper Marcus Kane found McDaid in space. Unfortunately Robbie's first touch wasn't great and the chance was gone. Some nifty footwork by Darren Murray on 25 minutes saw the big striker elude several defenders before firing wide of the far post. Next up was Curtis Allen, latching on to a hopeful ball from Murray before smashing a shot from a tight angle off the crossbar. 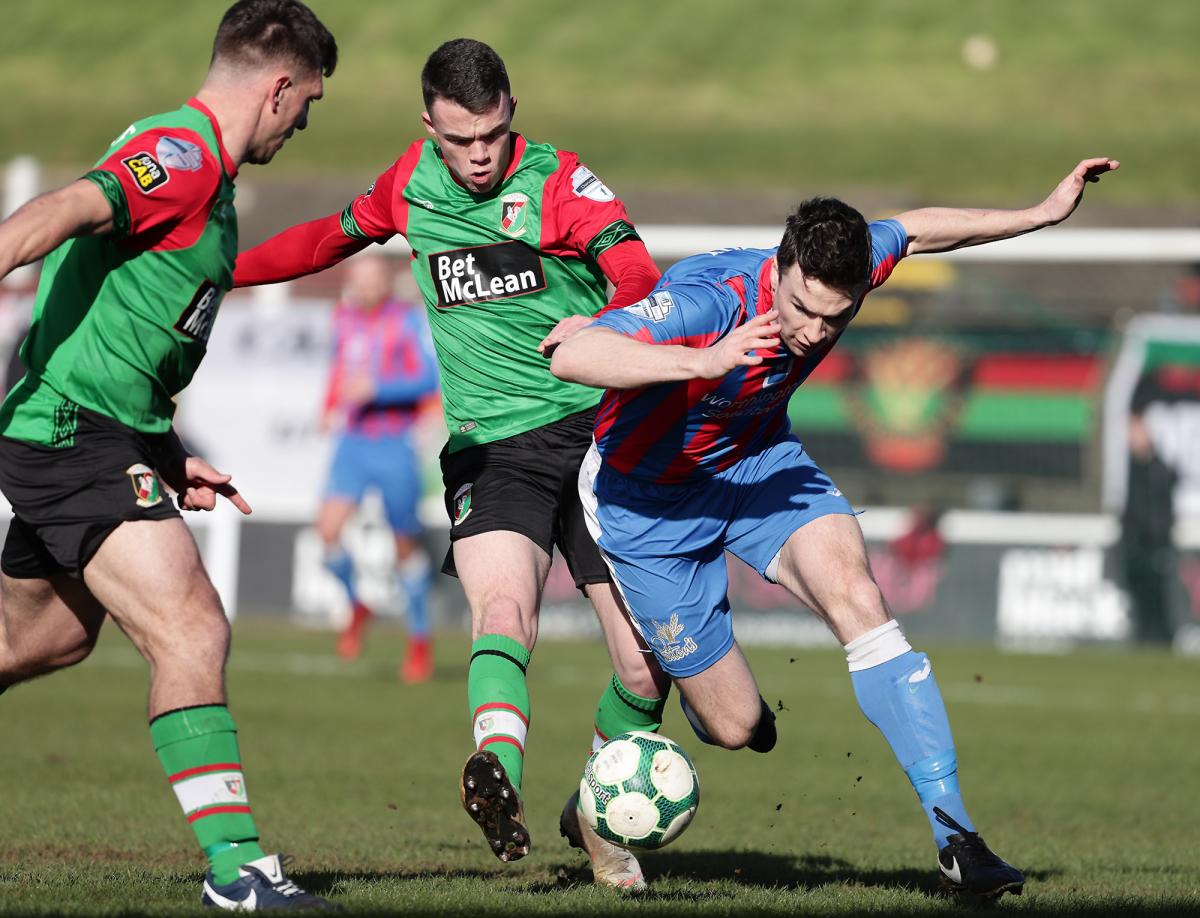 10 minutes from the break Ards had their first real attempt, Mark Kelly going through only to be denied by an outstanding save from Dwayne Nelson. On 41 minutes, against the run of play, Ards edged in front. A cross from Craig McClean on the left saw both Peers and Garrett go to clear. Both missed the ball and it bounced off Kelly to set up an easy close range finish for McLellan. Just before the interval Ards were reduced to 10 men and it probably could have been worse for the visitors. A really poor tackle by Gareth Tommons, who had already received a yellow card, went unpunished by referee Tavinder. Kym Nelson then appeared to headbutt Darren Murray and the former Glentoran player received a straight red card which will probably end his season. Murray bizarrely received a yellow card, the referee perhaps wanting to even things up somewhat. 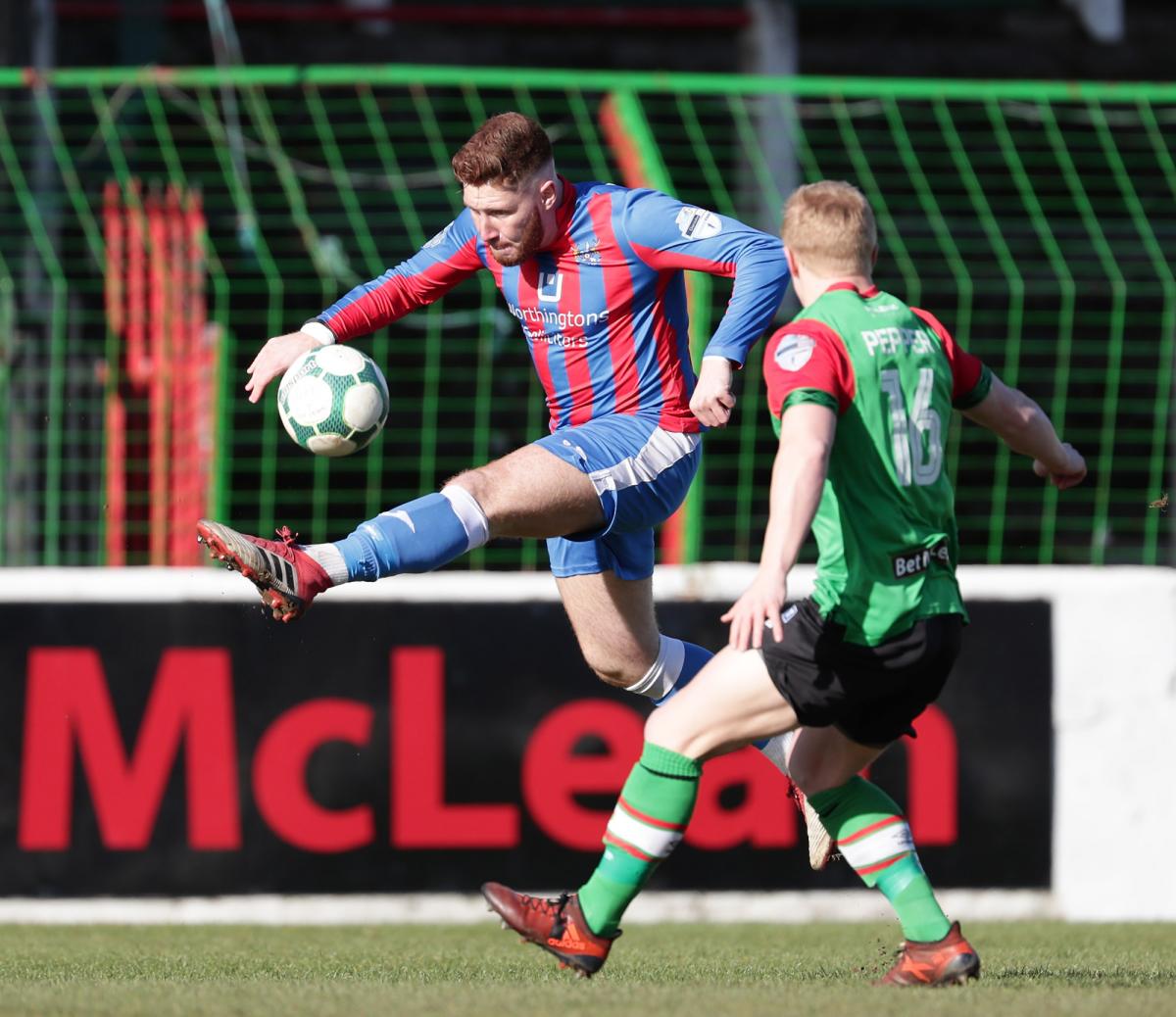 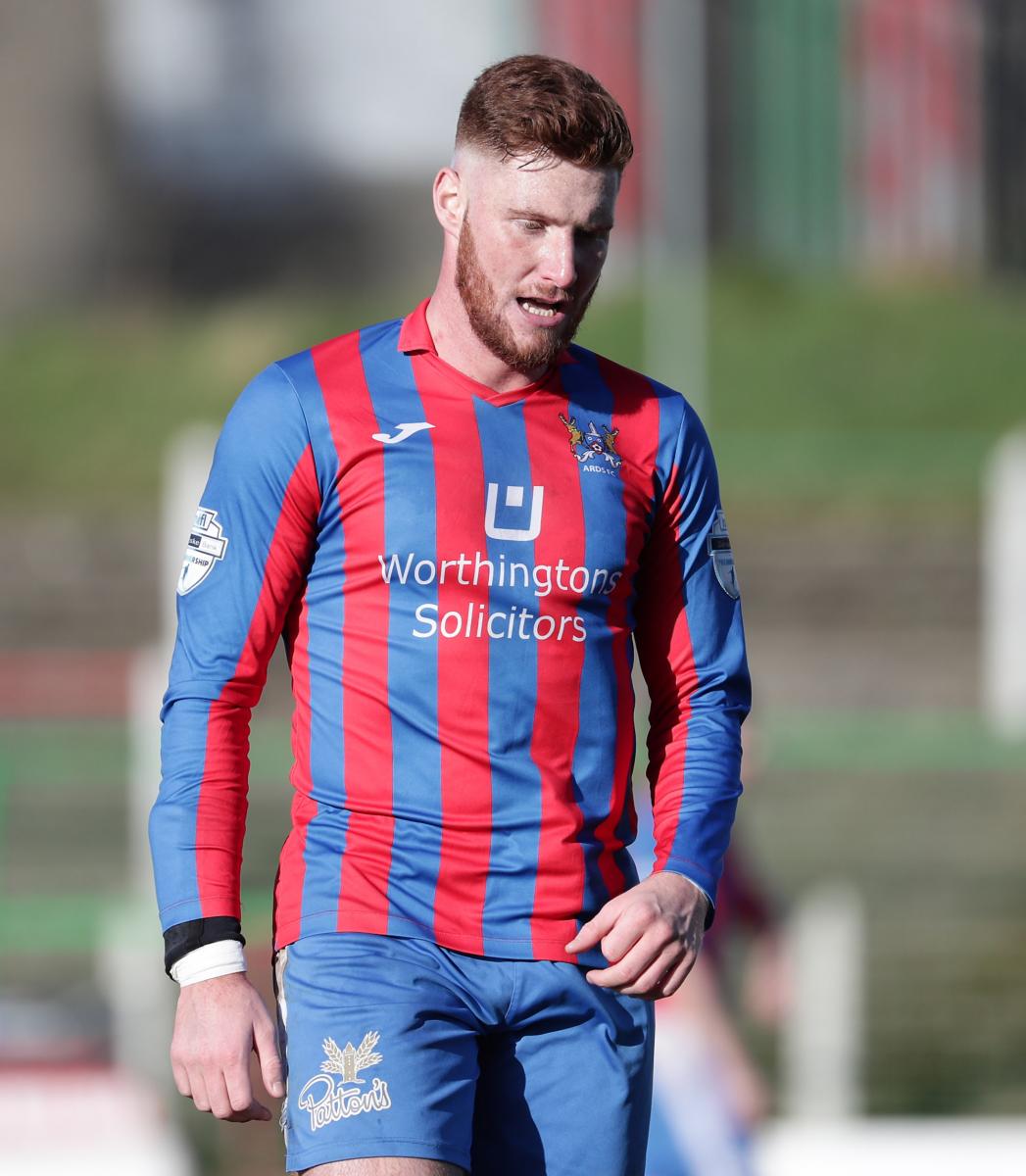 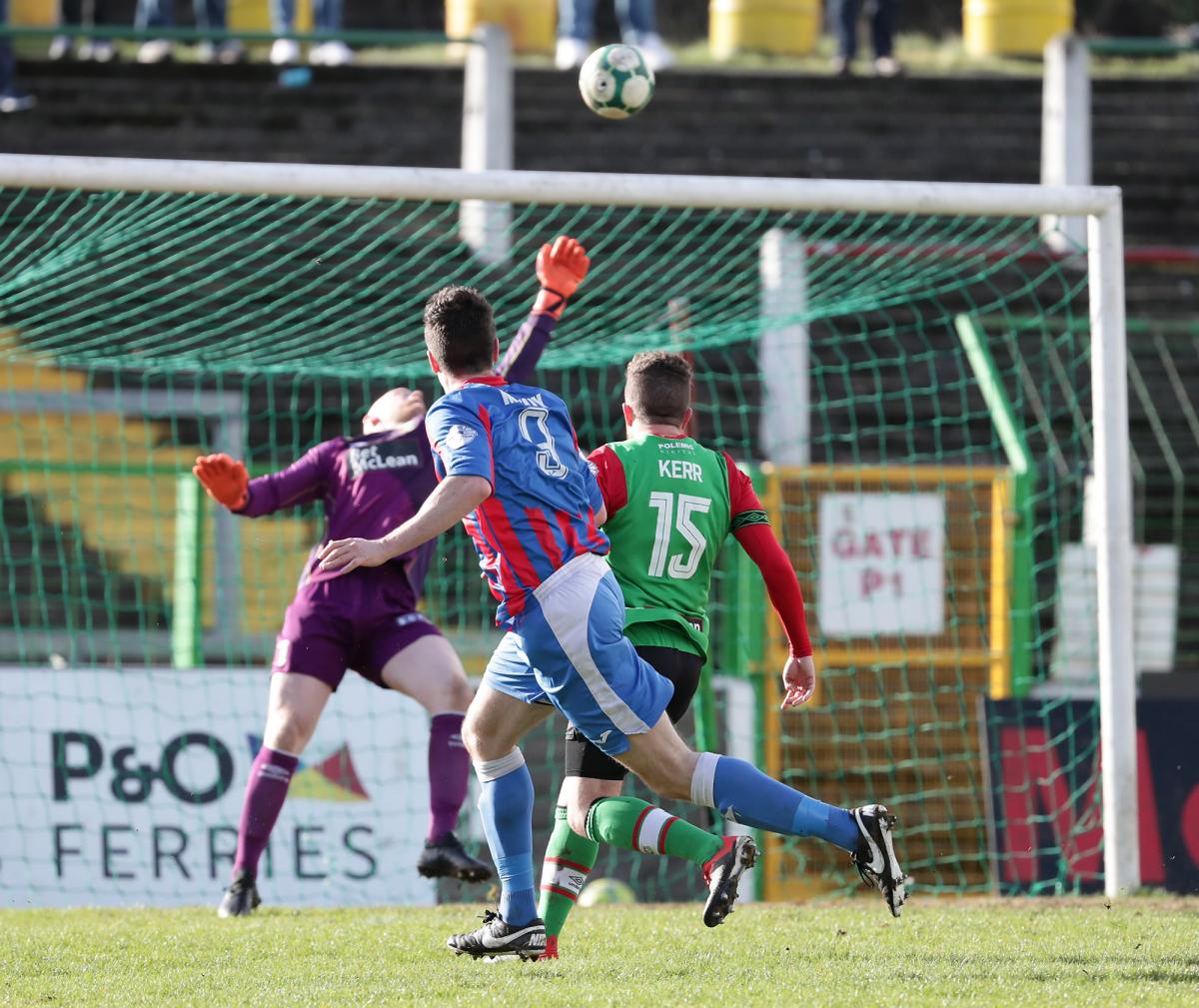 Glentoran, playing into the strong wind had much the better of the second half but too often took the wrong option when in decent attacking positions. Marcus Kane had a shot blocked on 50 minutes before the home side were awarded two freekicks in quick succession around 25 yards from goal. Both were wasted though, Gallagher taking the first and hitting the wall before Murray fired the second high and wide. A superb cross from Nathan Kerr on the right saw the Ards defence get lucky on 56 minutes, the ball deflecting off one player before the second sliced it over his own crossbar. 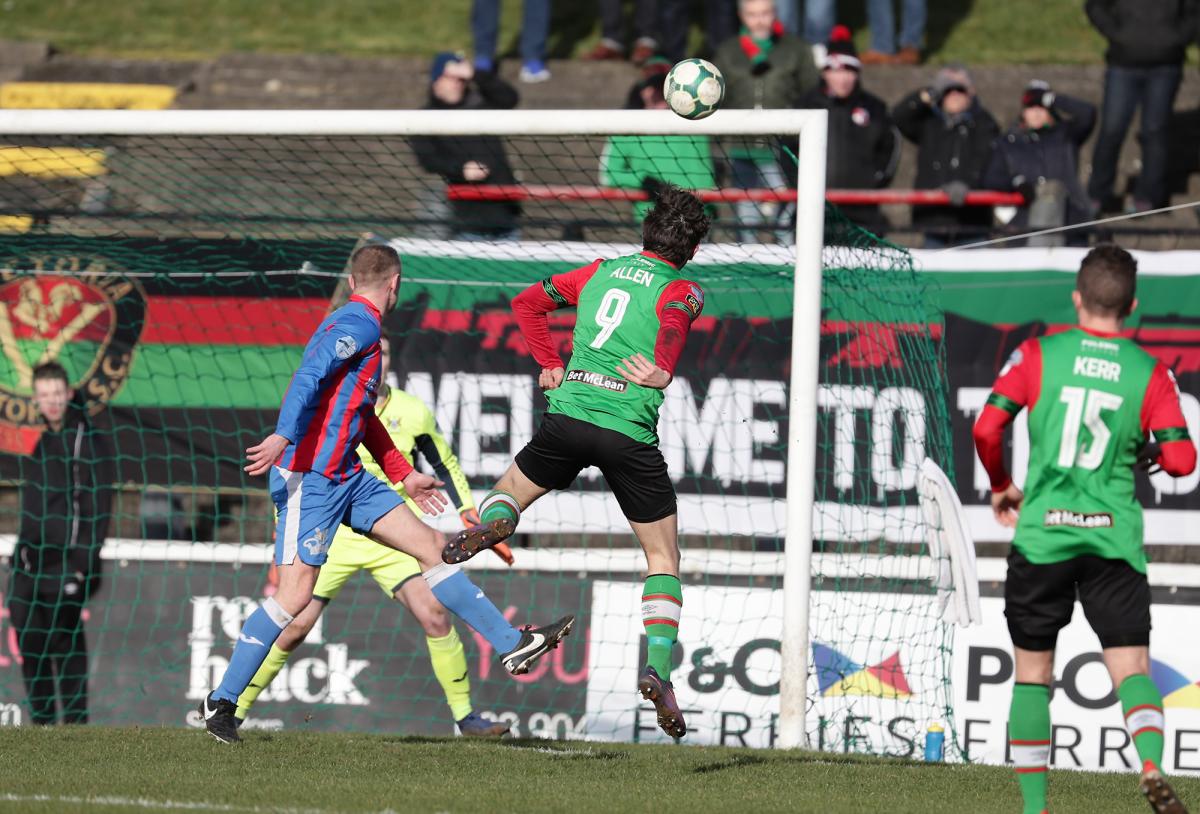 On 63 minutes 18-year old Jamie Glover came on for his Glentoran debut, replacing the ineffective Luckas Gwiazda and with 20 minutes remaining Glover was involved in the home side's equaliser. Glover's free kick from near the right corner flag was headed goalwards by Curtis Allen. The ball seemed destined for the bottom corner but Darren Murray was on hand to make sure it crossed the line. It was Murray's 7th goal in 8 games for the Glens. An excellent scoring ratio which hopefully he can maintain. On 76 minutes another chance for Murray was blocked. The ball broke to Chris Gallagher and his effort seemed that it would win the game for Glentoran only for Johnston to produce an excellent stop to deny him. 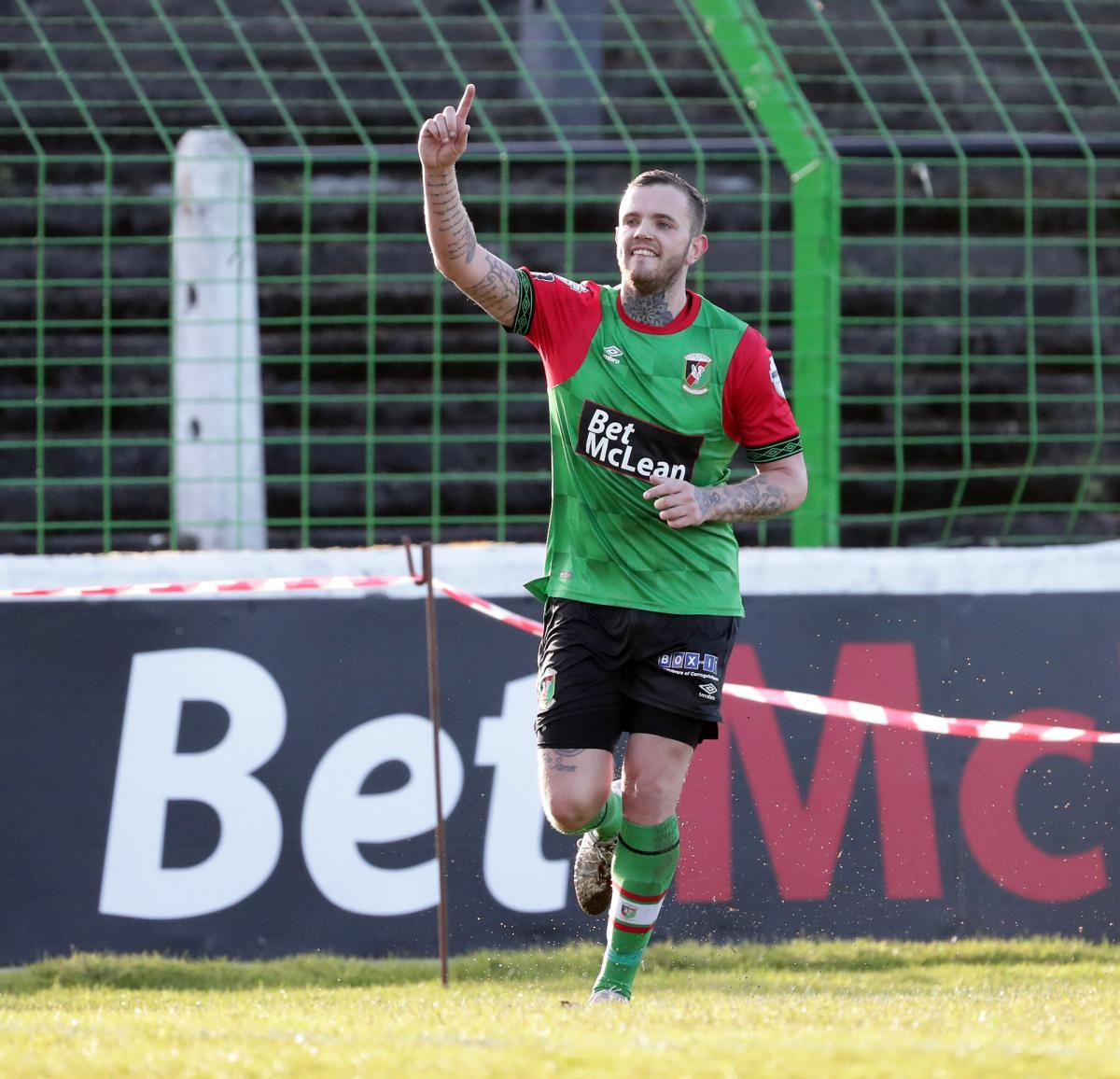 In the final minute a header from Willie Garrett came back off the crossbar and then we entered 3 minutes of stoppage time. Given that there were 4 substitutions, several occasions where players needed on-field treatment and persistent timewasting, particularly by the Ards keeper, the home support felt somewhat short changed by referee Tavinder. With upcoming tough road trips to Ballymena and Solitude today seemed like a bit of a missed opportunity for Glentoran to try and grab the initiative for the 7th place finish which would keep alive a slim hope of European football next season. The team will have to go up another gear in the remainder of this month if they are to make that objective. 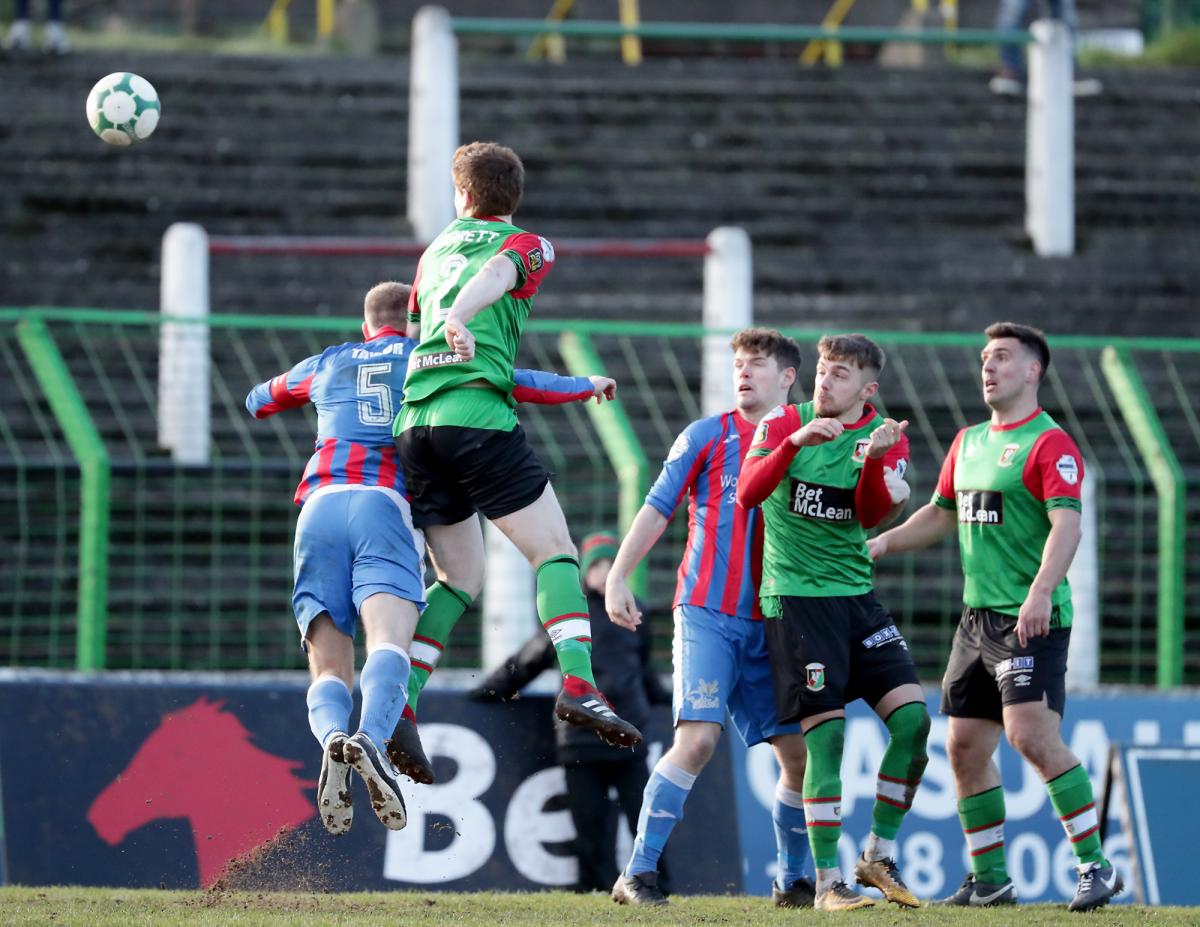 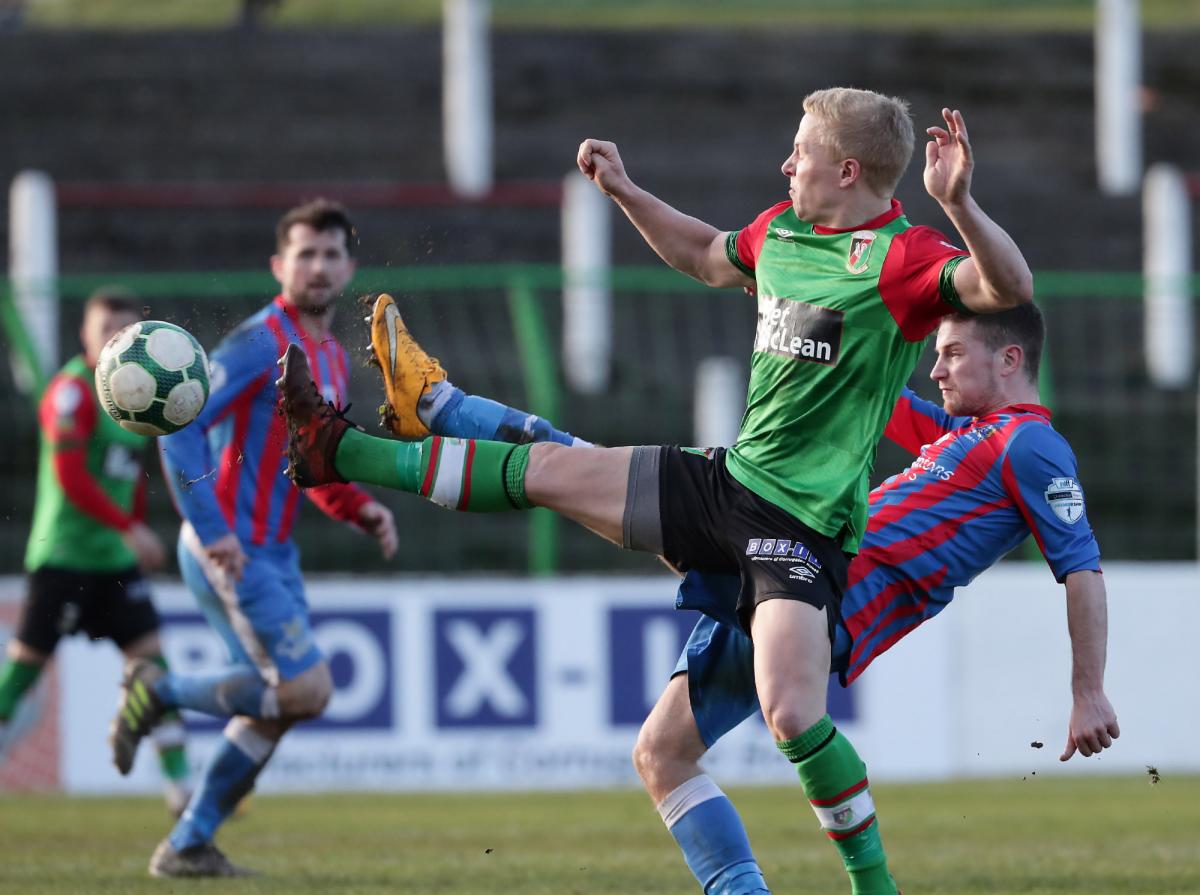 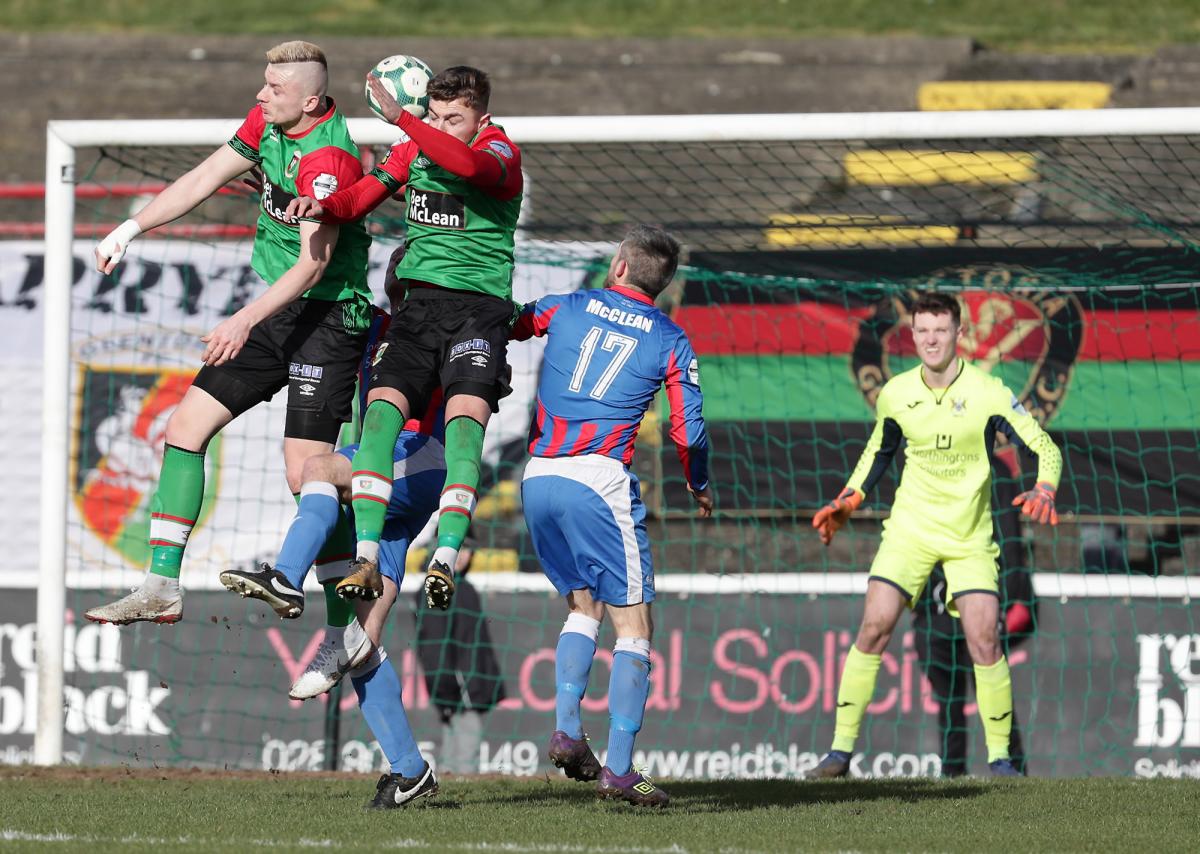