The Glens climbed to seventh place in the Danske Bank Premiership with a victory over Ards at the Oval this afternoon. Curtis Allen was the man on target with his fourth goal of the season coming in the 41st minute.

Glentoran were delighted to welcome Alex Wright, Sean Mann and Todd Kropp, owners of Detroit City FC, and their partners to the Oval.

Prior to kick off the two clubs announced that there will be a friendly fixture held in Detroit next May to mark the 50th anniversary of Glentoran representing the City of Detroit as the 'Cougars'. Read the full story HERE 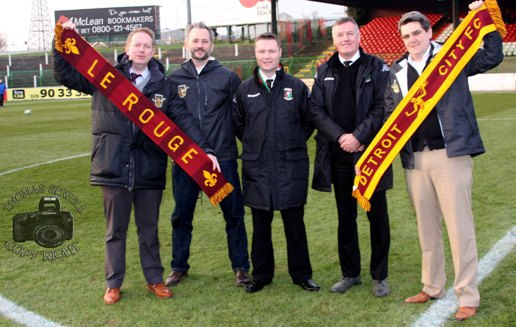 Shrouded in the grey mist of a November day, little or no wind along with the pitch in excellent shape (once again a credit to our groundsman) meant conditions were excellent for football. Ards our visitors have a poor record at The Oval, but the faithful were hoping that our previous sub standard performance against them at Clandeboye Park earlier in the year could be reversed. Supporters appeared pleased with the news that manager Gary Haveron was being positive by playing two up front, with Jonathan Smith starting alongside Curtis Allen.

Following a few unproductive early encounters it was the Glens who threatened first, when in the 10th minute, the dangerous looking Curtis Allen forced ex Glens stopper Aaron Hogg to turn the ball round the post. However, Ards came back straight away when Ross Redman was on hand to head the ball off the line after it had eluded Elliott Morris in the box. In the 25th minute Chris Lavery forced a good save after one of his trade mark strong runs into the box.

Unfortunately five minutes from half time, Ciaran Caldwell had to be replaced by James Ferrin.  Hopefully it won't prove a serious injury as Ciaran has become an integral member of the team, particularly with his support to the front men. 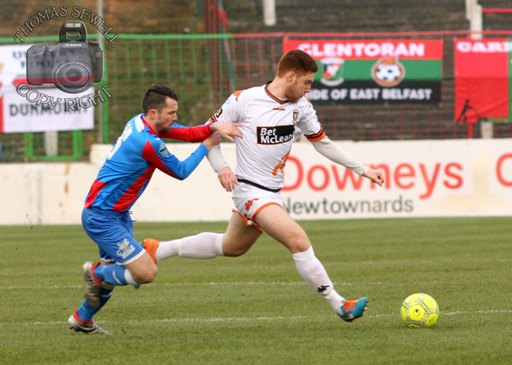 The breakthrough however came a few minutes later. Following good work by Aaron Harmon, the ball arrived at the foot of Curtis Allen. Originally it looked like he had scuffed his kick but the ball looped up and slowly went over the keeper's head and went behind the line. A great goal from the master poacher; just what the team needed to enjoy their half time cuppa.

The second half started with the crowd hoping that the Glens could increase their goal tally. Indeed this looked as if would be the case when Jonathan Smith glanced a header wide after ten minutes and then again five minutes later after a good run by Ross Redman, the ball fell to Aaron Harmon who drove his fierce shot just wide.

It was good to see the partnership of Smith and Allen developing up front, and this was demonstrated when they exchanged passes to see the ball coming of the Ards post - although the move was adjudged to have been offside. 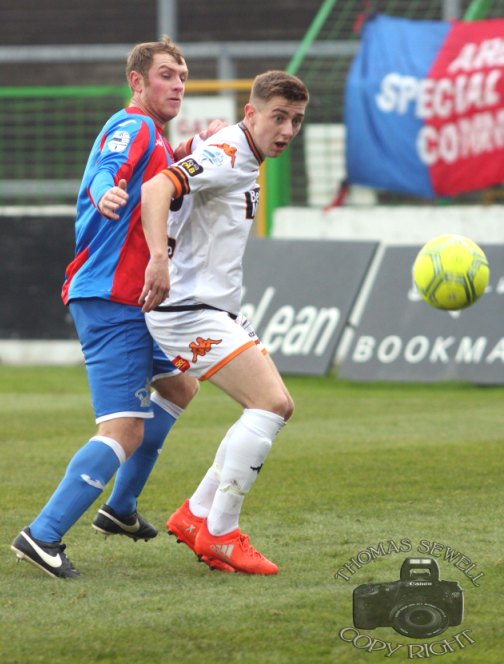 Although the match was played in a sporting spirit, the game entered a phase which was dominated by the ref's whistle for niggly fouls committed by both sides. Ross Redman did however receive the yellow card for a rash late challenge.

As the game moved into its final phase, Ards started to throw caution to the wind and pushed forward hoping to gain at least a point. The Glens defence earlier in the season may have leaked a goal at this stage but now they appear to be much more resilient against the final opposition push. Jay Magee has been excellent over the past few matches and his determination and leadership of the back four has meant that we are now much more stable when the opposition applies the pressure.

Curtis Allen's goal in the end decided the encounter and the crowd were glad to hear the final whistle to secure the three points.

This was a match that will not last long in the memory, but the most important thing is the three points.  We are now in a much better place than we were two months ago, indeed a top six finish is now very much on the cards. Although some of the recent matches have been not exciting from a spectator point of view, I think most of the supporters at The Oval this afternoon would be more than happy to sacrifice that for the three points. Well done Glens.

After the game our visitors joined us in the boardroom for food and drinks. They were presented with a signed Glentoran away shirt by Stuart Malcom, Chairman of Cougars GSC. 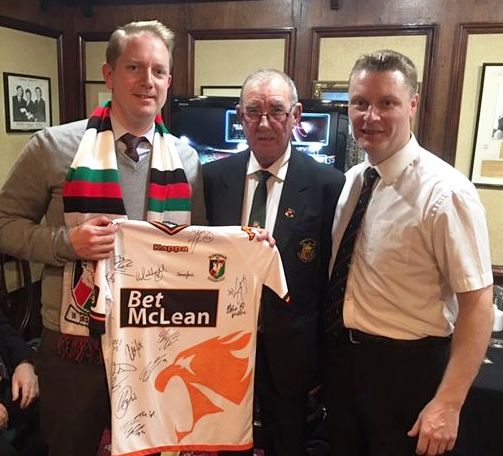