A goal after 25 seconds and a late penalty gave Coleraine a 2-0 win at the Oval in the Danske Bank Premiership.

In extremely blustery conditions at the Oval, Glentoran opted to play with the wind behind their backs and attack the Sydenham End in the first half but before they could settle and try to take advantage of the conditions, they fell behind to an Eoin Bradley goal. 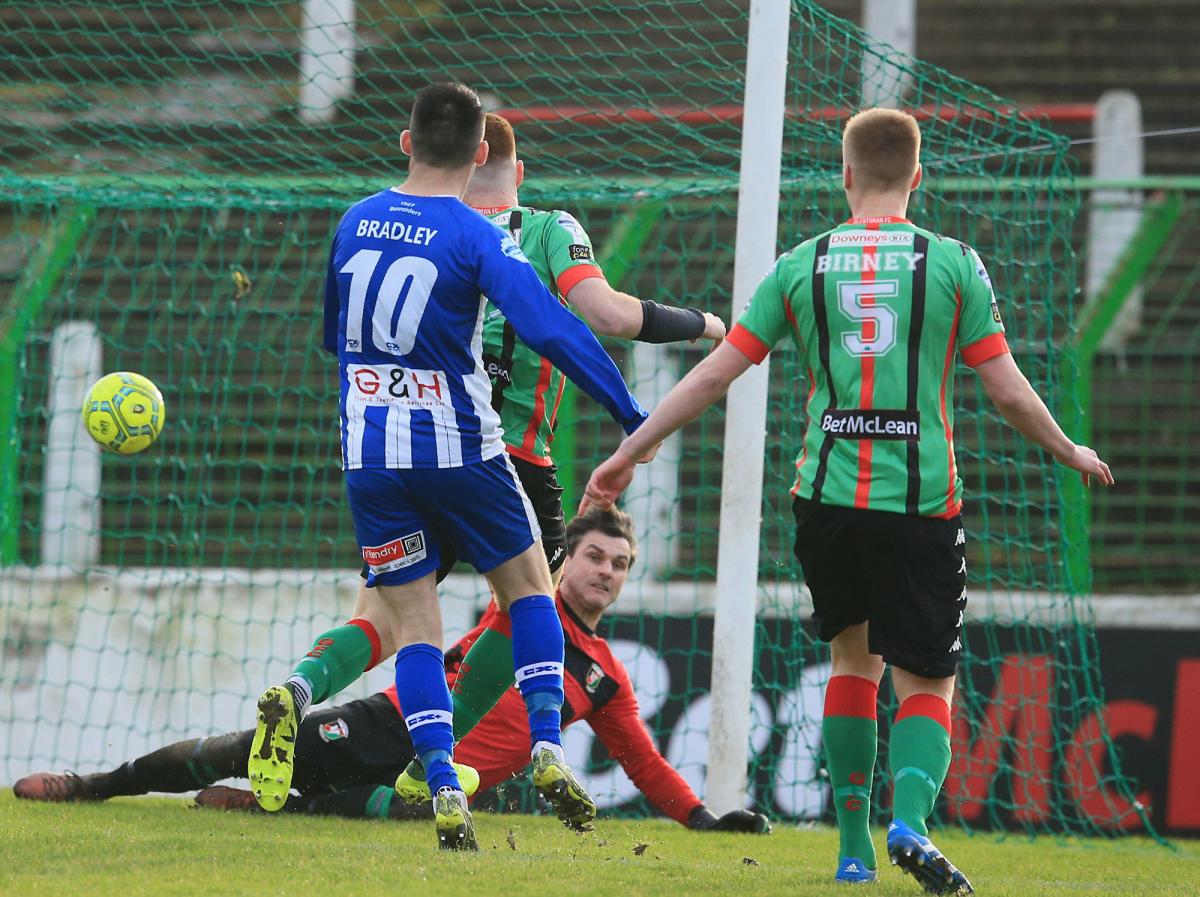 Many of those attending had barely taken their seats when Bradley skipped past Jonny Addis and then Calum Birney before slotting the ball past Elliott Morris. The Glens tried to get back into the game quickly and twice within a matter of minutes Curtis Allen found space on the right and cut in to try to beat Chris Johns. The first effort flew wide of the far post and the second went well over the crossbar. Both Martin Smith and Stephen Dooley then had efforts for the Bannsiders; Smith's shot was off target whilst Dooley's was straight at the Glens' keeper, Elliott Morris. Stephen Dooley raced clear again on 16 minutes but was stopped in his tracks by a superb tackle by Kym Nelson. Both players required on-field treatment but although they resumed, both had to be substituted within minutes. 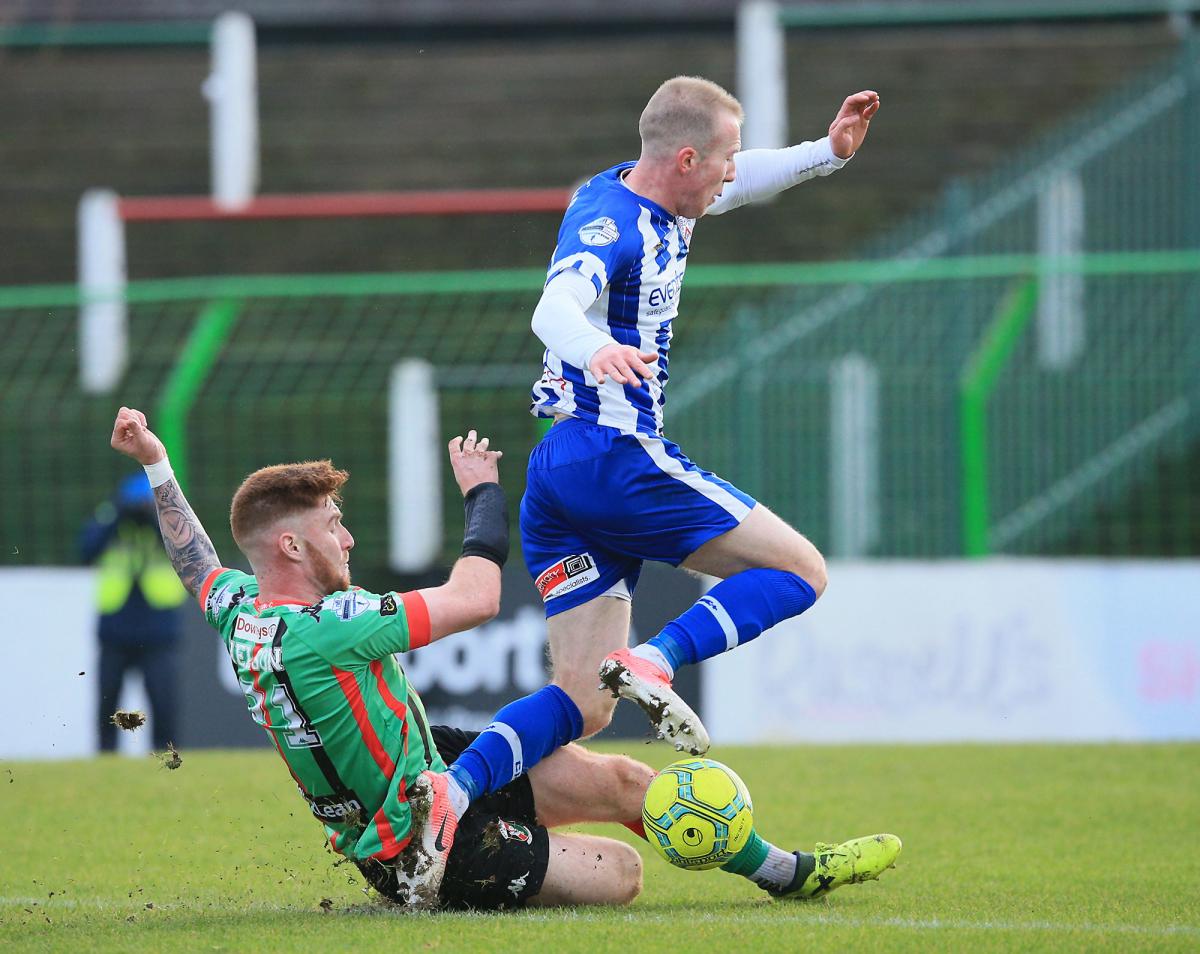 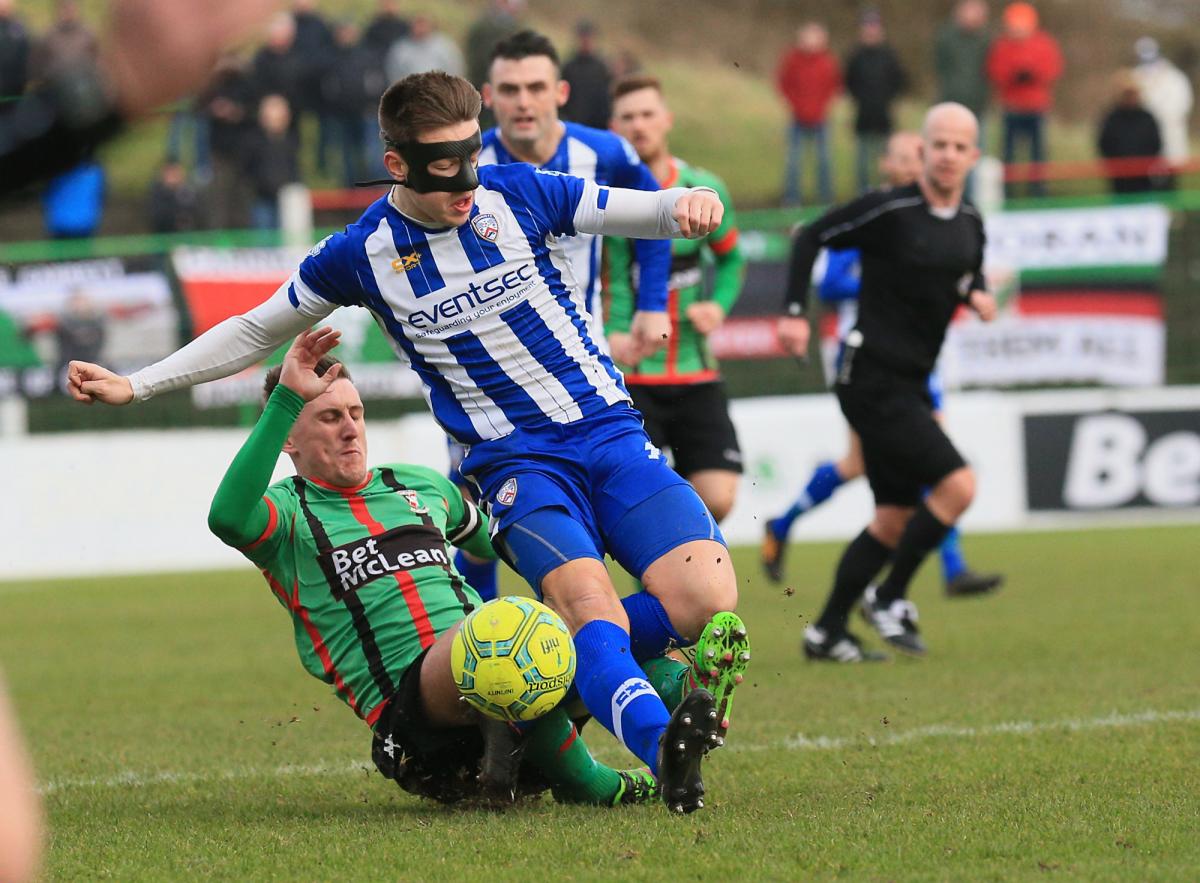 Midway through the first half Dylan Davidson was fouled outside the area. Davidson took the free kick himself but his shot was about a yard over the bar. Glentoran skipper, Marcus Kane saw his long range effort go well wide and moments later the same player won a great tackle in midfield to prevent Brad Lyons breaking clear. It was a good, old fashioned, crunching tackle with Kane clearly winning the ball. Unfortunately for Lyons, he was unable to continue. Both teams struggled to string together any meaningful moves as the half petered out. John McGuigan had an attempt off target whilst at the other end, Harkin was given too much space on the edge of the area and had his shot been a foot lower, Coleraine would have doubled their lead. 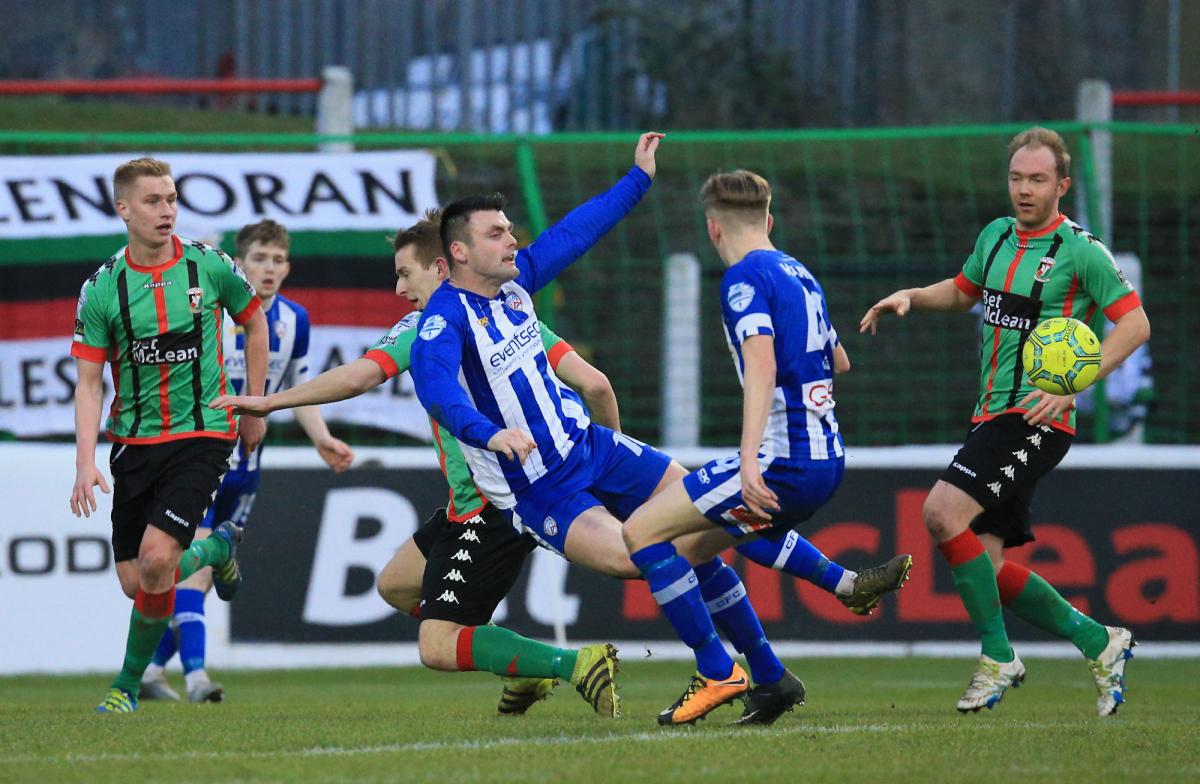 For the first 10 minutes of the second half there was little football played and nothing to involve either goalkeeper. Then on 57 minutes a long free kick from Jonny Addis found McGuigan in the area. He played the ball towards Curtis Allen but his goalward flick was easly dealt with by Chris Johns. Just after the hour mark James Knowles fired a feree kick into the danger area. Substitute Robbie McDaid met the ball but was unlucky to see his header go inches wide of the post with Johns beaten. 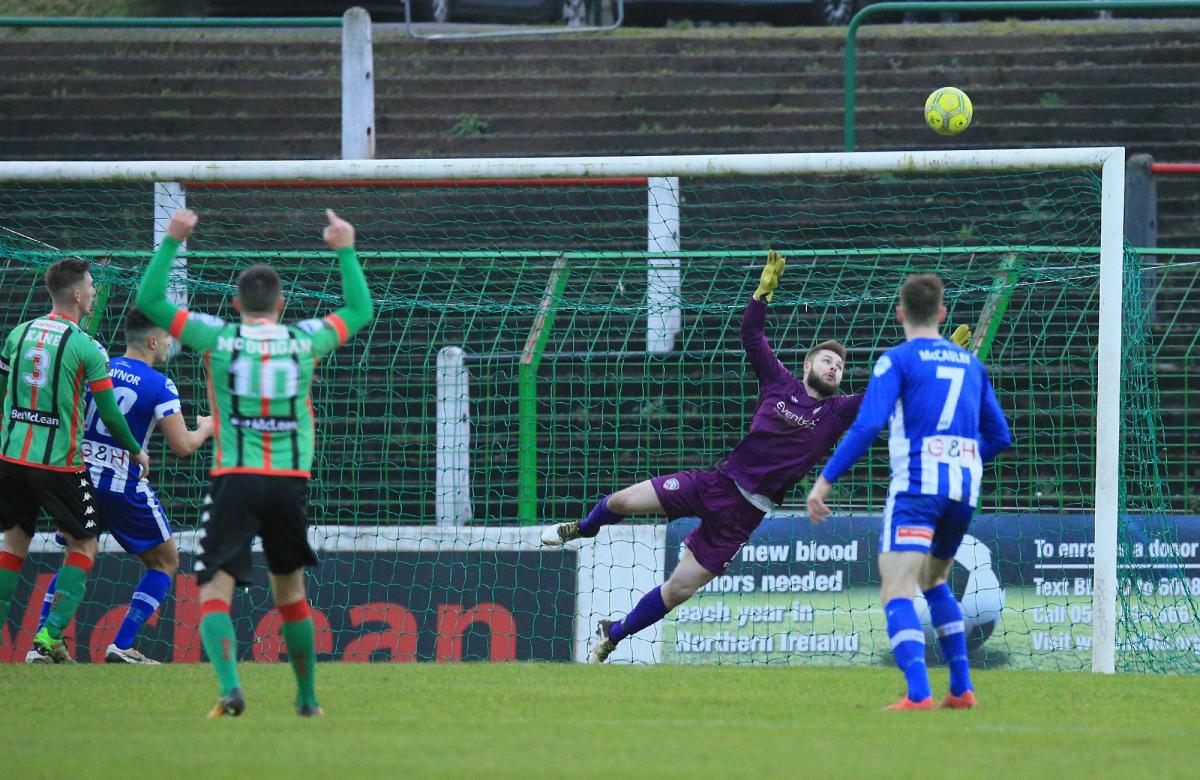 On 63 minutes McDaid had another chance but appeared to be pulled back as he pulled the trigger. Referee Tavindir ignored the strong appeals for a penalty and awarded a goal kick! At this stage the Glens were putting some good attacking moves together but the final ball kept letting them down. On one break from the back, Calum Birney found himself in the Coleraine penalty area but Dylan Davidson was unable to pick him out with his left wing cross. 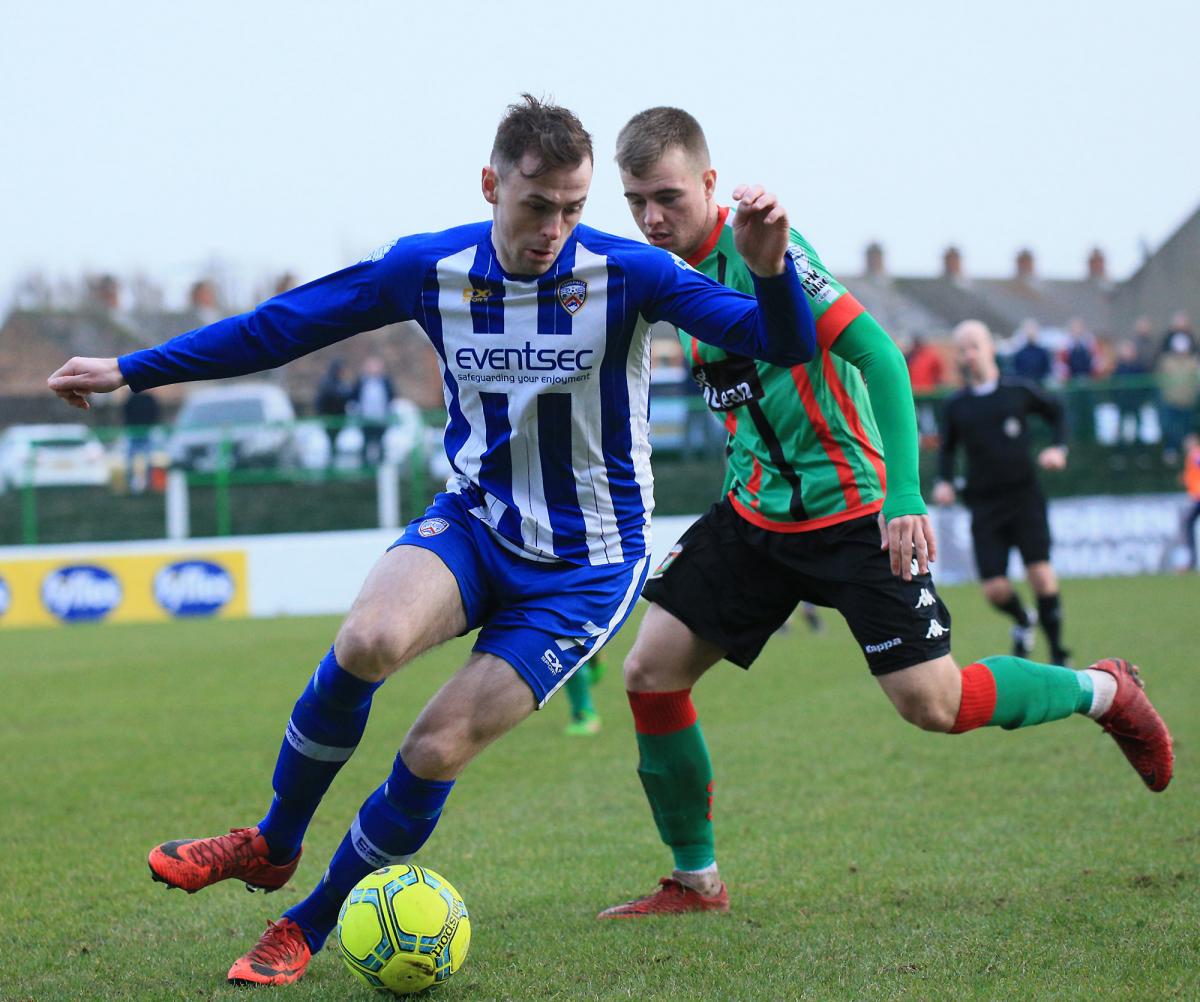 Coleraine substitute, Josh Carson then got the better of Addis, getting to the by-line before drive a dangerous low ball towards goal. Fortunately for the home side, Calum Birney was on hand to make an excellent interception, conceding a corner in the process. Harkin then tested Morris with a long range effort but the Glentoran custodian was equal to it. As we approached the final 10 minutes Eoin Bradley was well wide with a snap shot from the edge of the area and then Robbie McDaid broke well down the left and put in a super cross which just eluded Curtis Allen. 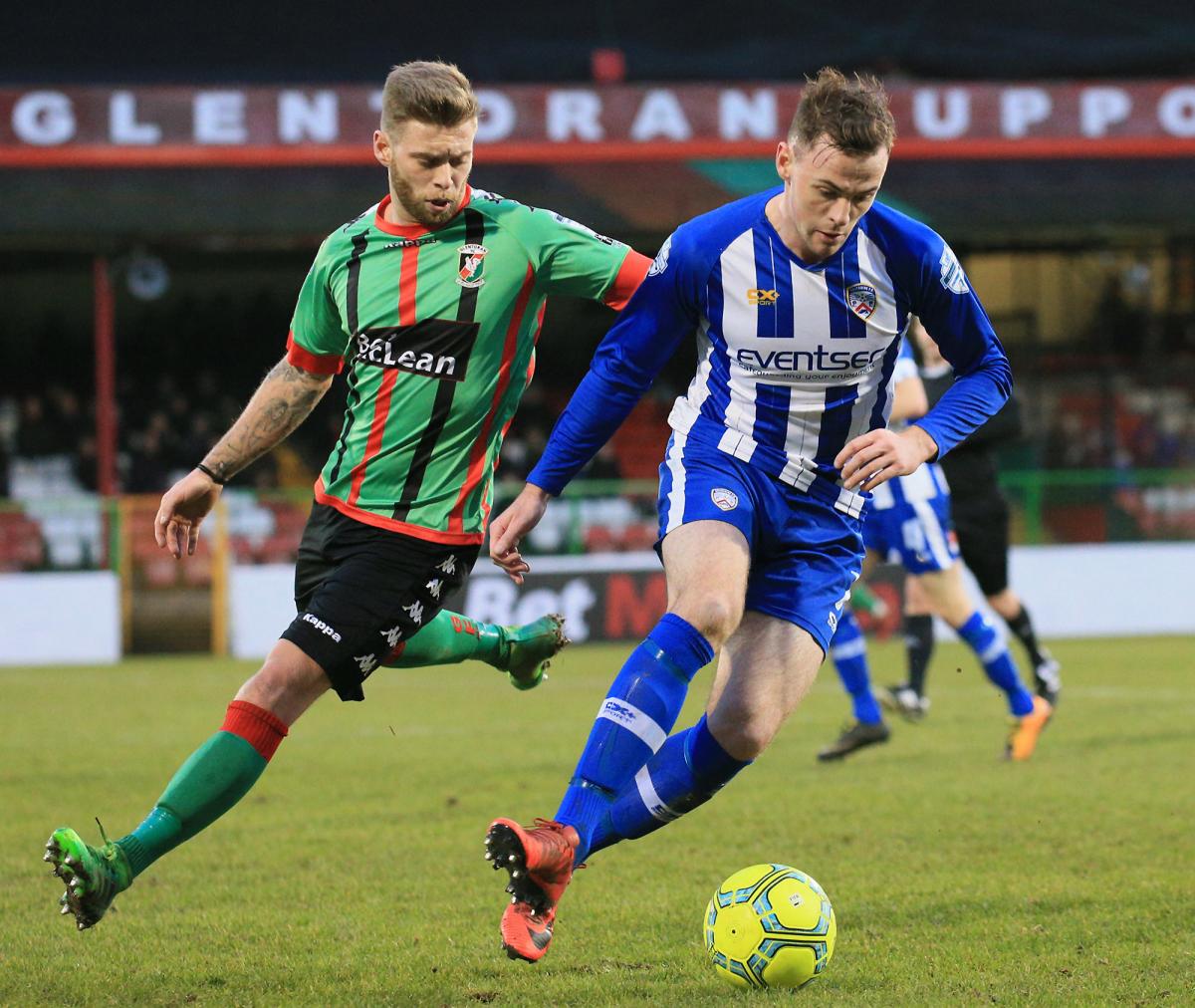 The Bannsiders made the points safe with 8 minutes remaining. A bad mistake by James Knowles saw the midfielder lose possession and Coleraine broke forward. When the ball came into the area Jonny Addis was adjudged to have brought down Josh Carson and this time Tavindir awarded the penalty. Harkin dispatched it to make it 2-nil. 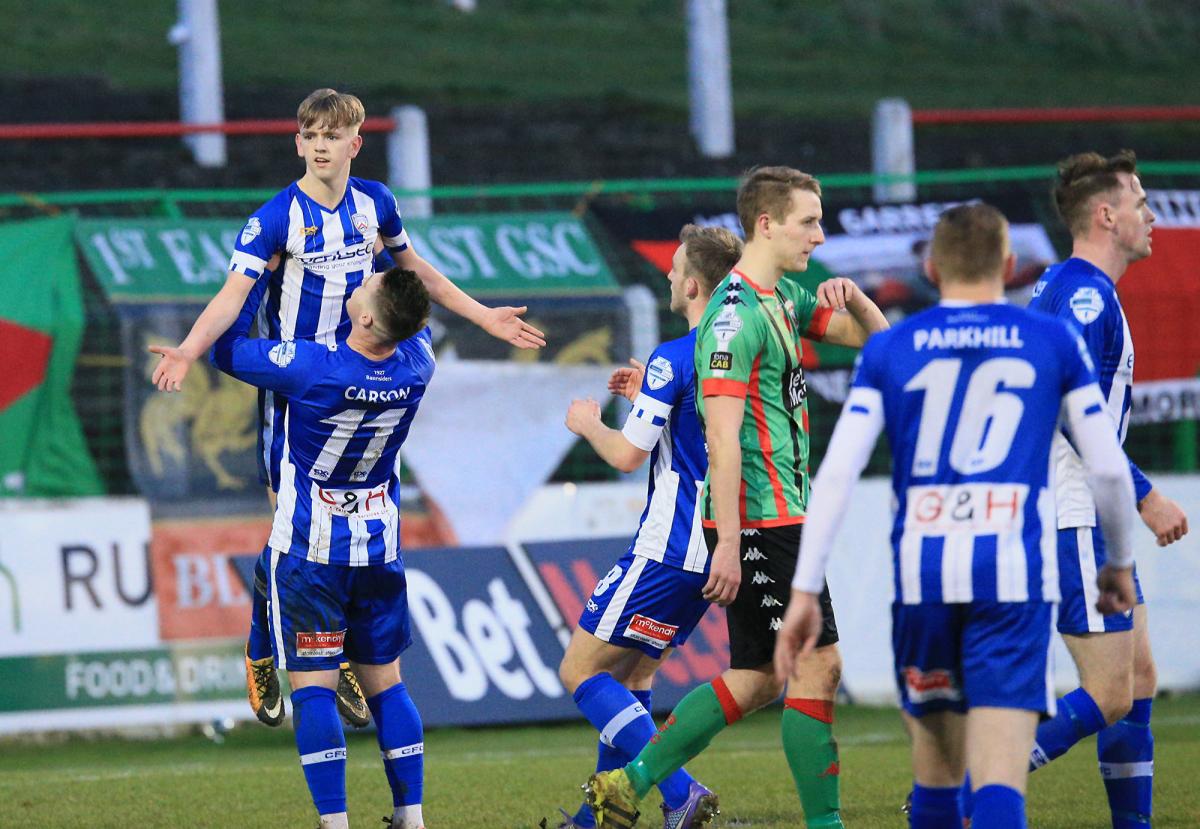 All in all it was a poor game in difficult conditions. Both goalkeepers had little to do but that early lack of concentration by the Glentoran defence and the late penalty ensured that the visitors collected the points and maintain their Danske Bank Premiership ambitions. 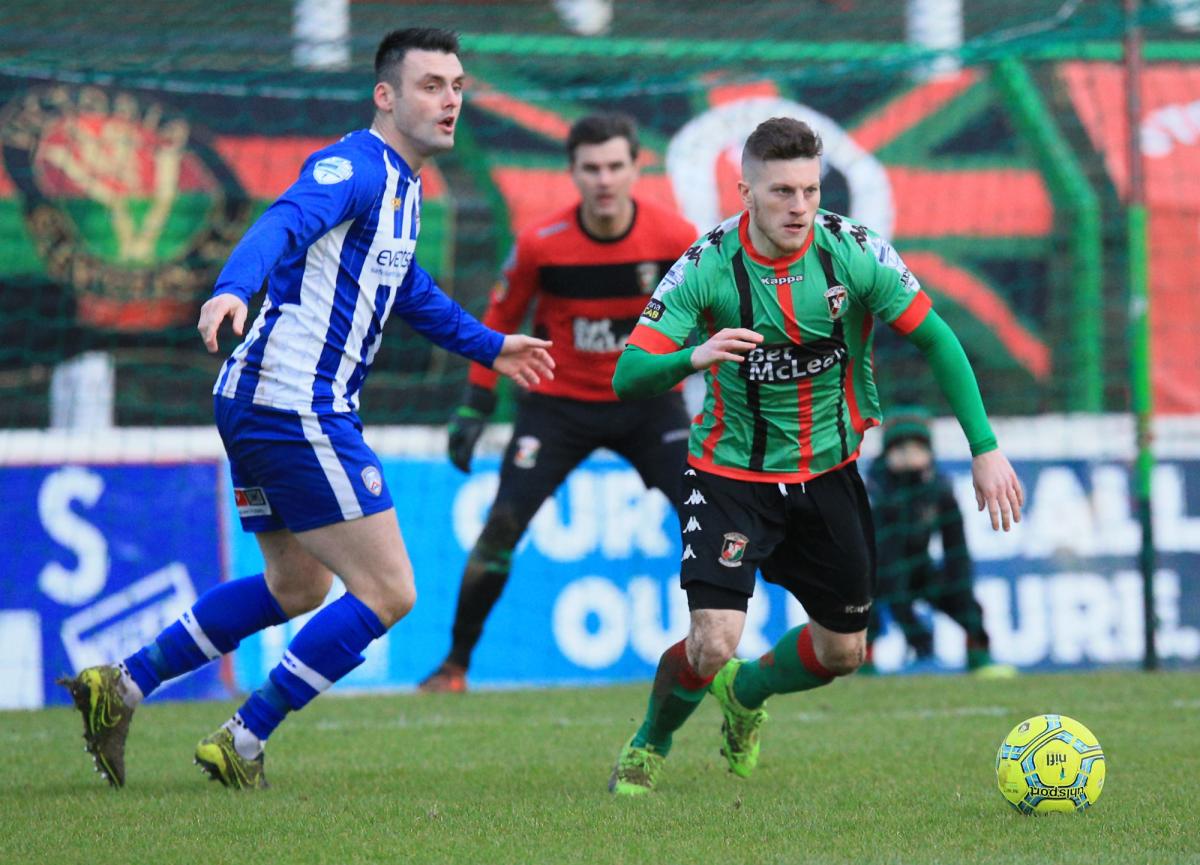