A Matthew Tipton penalty just after half time gave Linfield all three points at a windswept Oval this evening.  The Glens were forced into a number of changes through injury and suspension with Steven Gordon making his first ever start and young midfielder Kim Nelson making his debut.  The home side made a bright start forcing a couple of corners in the opening minutes but as the half progressed Linfield, with the strong wind in their favour, gradually gained a foothold in the game.  In the first half hour there was little to trouble either goalkeeper with a Matthew Tipton shot and a Calum Birney header from a corner both sailing over the bar. 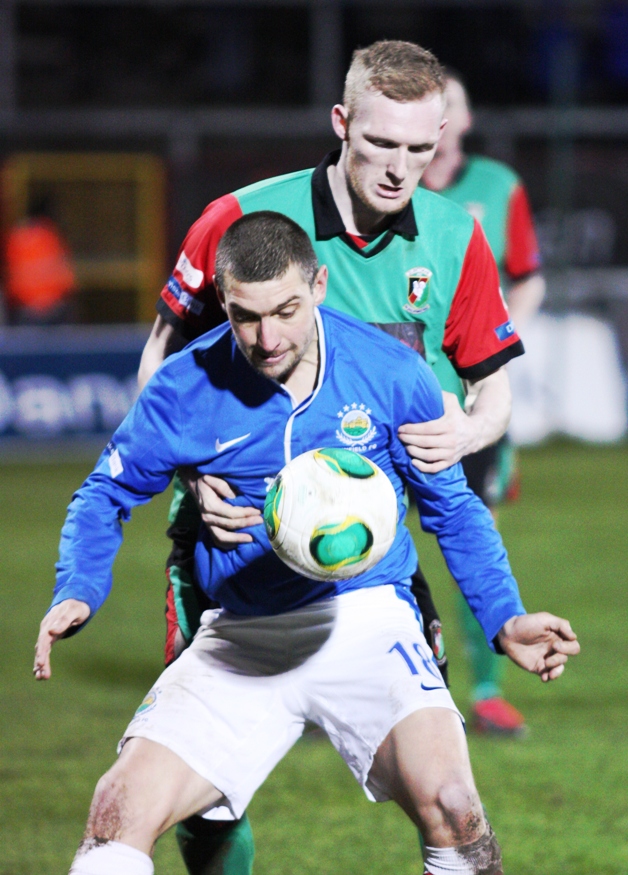 On 31 minutes former Glentoran striker Andy Waterworth should have opened the scoring when he shot into the side netting after getting the better of Birney.  Elliott Morris was finally called into action five minutes later when a Billy Joe Burns cross found Ivan Sproule at the far post but his header was superbly clawed away by the Glens captain.  A minute later Sproule had another chance as he sprinted clear of the Glens back four but it was Morris to the rescue once again as he was quickly out at the winger’s feet.  The rebound off Sproule looked to be drifting into the empty net but Jay Magee got back to acrobatically clear off the line.  With a minute left before the break the Glens carved out their best chance of the game.  A great through ball from Stephen McAlorum sent Curtis Allen clear of the Linfield defence, but the striker took one more touch than he would have liked to get the ball under control and Linfield goalkeeper Jonathan Tuffey was able to close him down and make a fine save. 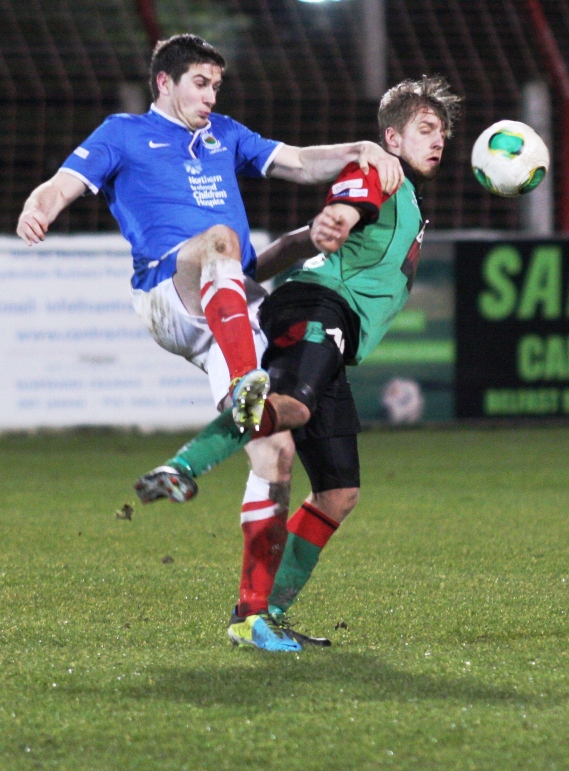 The Glens came out for the second half hoping to capitalise on the wind advantage but just four minutes in came the decisive moment of the game.  Sean Ward made a break down the left and as he made his way into the Glentoran box he was brought down by Jordan Stewart for a clear cut penalty.  Matthew Tipton stepped up to take the spot kick and gave Morris no chance, burying the ball into the bottom corner.  The goal scorer can count himself lucky to have stayed on the pitch 18 minutes later when his awful stamping challenge on Curtis Allen was deemed worthy of only a yellow card by referee Mervyn Smyth.

The Glens were struggling to create any chances of note and the visitors were faring little better, although Waterworth forced two more good saves from Morris, one at the striker’s feet as he burst down the right and another from close range after a long throw in.  In the end the game petered out tamely as the Glens fell to their third League defeat in a row, and they will be hoping that the Setanta Cup will be kinder to them as they make the trip to Dublin to take on Shamrock Rovers on Monday night.